Boyzone talk to Event about booze, depression and grief ahead of final tour

‘We were never choirboys. We’re a bunch of Irish Catholic boys, so it was never about sex. For Boyzone, it was always about the drink… that was the big problem for most of us,’ says Mikey Graham, as he recalls his time in one of the biggest boy bands of all time.

Boyzone sold 20 million albums in the Nineties. The five teenagers from Dublin headlined alongside Madonna, the Spice Girls and Oasis, had four No 1 albums and springboarded a solo career for lead singer Ronan Keating. They also launched the TV career of their manager, Louis Walsh, who went on to join The X Factor.

But behind the smiles, Graham, Keating, Keith Duffy, Stephen Gately and Shane Lynch struggled with the fame. On stage, their harmonies gave them hits like Father And Son and Picture Of You, but off stage they fell victim to drink, depression and paranoia.

Boyzone. On stage, their harmonies gave them hits like Father And Son and Picture Of You, but off stage they fell victim to drink, depression and paranoia

They split in 2000 after Keating decided he wanted to go solo and rows between the five escalated. Seven years later they buried the hatchet to make a new album and embark on a sell-out tour, but Stephen Gately died midway through the tour in 2009 from a pulmonary edema caused by an undiagnosed heart condition.

Now, on the eve of their final reunion, the four remaining members give their account of the booze, feuds and breakdowns that tore them apart, and explain how the tragic death of Gately brought them back together. Says Keating: ‘The album and tour are called Thank You And Goodnight because this is it. We’re doing this for Stevo, we’re doing it for the fans and we’re doing it for ourselves.’

After leaving Boyzone, Ronan Keating, 41, became one of the UK’s biggest male solo artists, selling 55 million albums. He has appeared in the West End as Guy in the musical ‘Once’. He is a judge on Australian ‘X Factor’ and host of Magic Radio’s breakfast show.

‘Boyzone took me from the worst heartbreak in my life to the greatest joy. We weren’t slick like Take That, we were always a bit of a mess, always late and we never had great dance routines or the right outfits. Lots of people in the industry thought we’d never make it, but we were all grafters and we never stopped pushing. When we first heard our debut song – Working My Way Back To You – on the radio, we stopped our car and started jumping around like we’d won the lottery. I was 17 years old and suddenly we were flying on private planes with arguments about who sat where. We had incredible moments standing in corridors with Madonna and Oasis, and sharing a stage with Pavarotti. 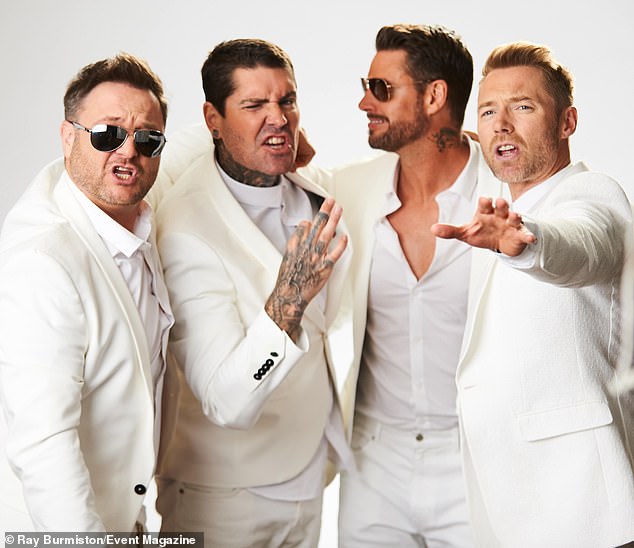 ‘We had incredible moments standing in corridors with Madonna and Oasis, and sharing a stage with Pavarotti,’ says Ronan Keating 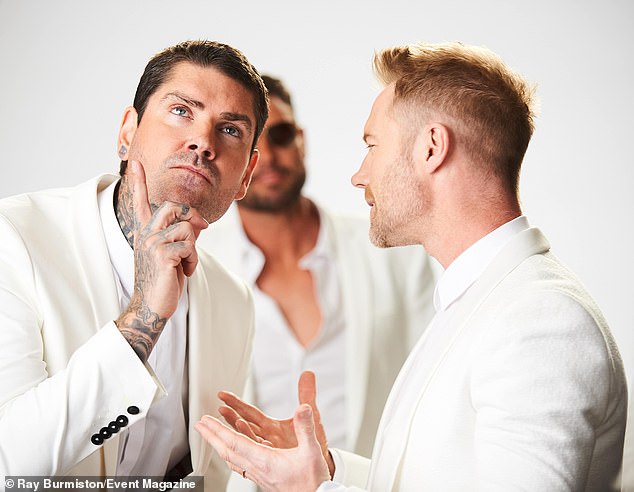 ‘When I try to think of myself at the height of our fame, all I can think of is the fear I felt almost every minute of the day unless I was drinking it away with beer and vodka 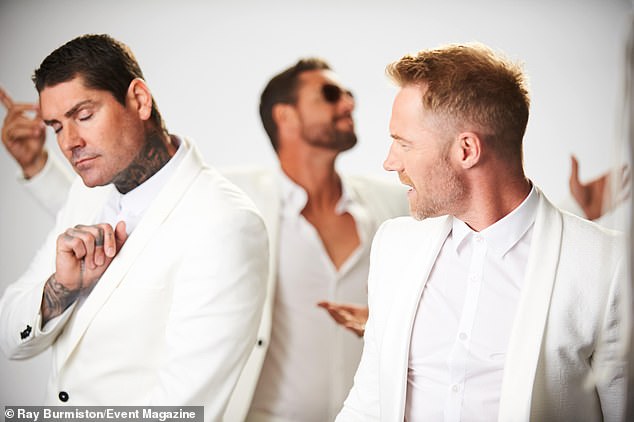 Lynch, 42, (left) has appeared on several reality shows, from ‘Celebrity Big Brother’ to ‘Love Island’. He has also become a professional drift driver

‘In the end, it was a pressure cooker. There were a lot of rows and always lots of alcohol. I take full responsibility for breaking up the group in 2000. None of us spoke for years after we split, but we got back together in 2007. Then, in 2009, I got a call out of the blue saying: ‘Stephen is dead.’ His death broke us but it bonded us for ever. The night before his funeral, his mam told us she couldn’t bear for him to be on his own in the church, so all of us took our sleeping bags down there and slept by his side.

‘My life is so different now. I have my solo career and I’ve done a bit of acting. I’d never have had all this without Boyzone.’

Lynch, 42, has appeared on several reality shows, from ‘Celebrity Big Brother’ to ‘Love Island’. He has also become a professional drift driver.

‘When I try to think of myself at the height of our fame, all I can think of is the fear I felt almost every minute of the day unless I was drinking it away with beer and vodka.

‘I was always the odd kid out in Dublin. I didn’t do well at school. But I was always working, picking up balls on golf courses and as a mechanic, which was where I was, aged 17, when a friend came to talk to me about putting together an Irish equivalent of Take That. A year later, I was sitting in the back of a van, driving across the country, performing in pubs and clubs. In 1994, our second single, Love Me For A Reason, went to No 3 in the charts, and everything changed. 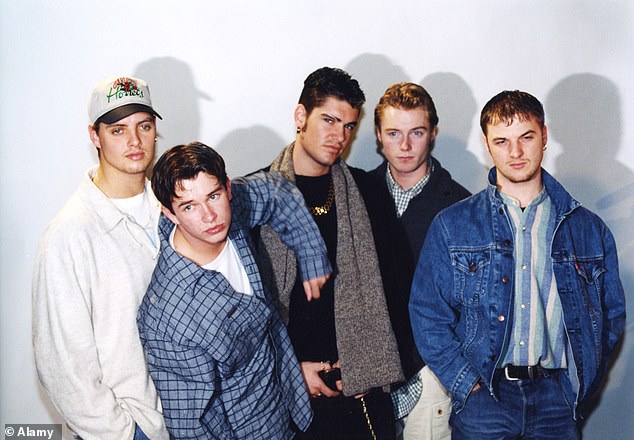 ‘Looking back, I think I felt very insecure about my place in the band. I had money to buy Ferraris and Bentleys, but I also felt I couldn’t breathe because we were constantly being told what to do. My life wasn’t my own. We were meant to be the good boys, but I acted out. At the 1999 MTV Awards, I got into trouble for swearing live on stage, and then got into a fight with P Diddy. It was all part of the madness of a young lad feeling out of control with his life. I started dabbling with the occult and I went down a very dark road.

‘When the band finished, I didn’t know what to do with myself. I spent two years at home drinking myself stupid and playing video games. My marriage [to Eternal singer Easther Bennett] ended after two years because we discovered we didn’t know each other at all. Two things changed my life: finding my second wife, Sheena [White], and finding faith. When I started dating Sheena in 2002, I couldn’t drink as I had to drive across London to see her, and she dragged me out of my darkness.’

Dublin-based Graham, 45, has become a successful songwriter and producer. He has appeared on ITV’s ‘Dancing On Ice’ and in the film ‘Situations Vacant’.

‘If you want to be in a boy band you have to be prepared to put yourself emotionally, physically and mentally through hell. When I auditioned, me and Colin Farrell were down to the final four. Then Louis Walsh – who’d already told me I was in – turned round and said: ‘No thanks.’ Classic Louis. Six months later he asked me to come on board when his other choices didn’t work out.

‘I didn’t get much of a look in when it came to the vocals, which were all mostly given to Ronan and Stephen. It badly damaged my self-esteem. At my worst I’d knock back a bottle of Jack Daniel’s a night. I suffered from depression and withdrew into myself. When we finally split, my first thought was, “Thank God for that.” 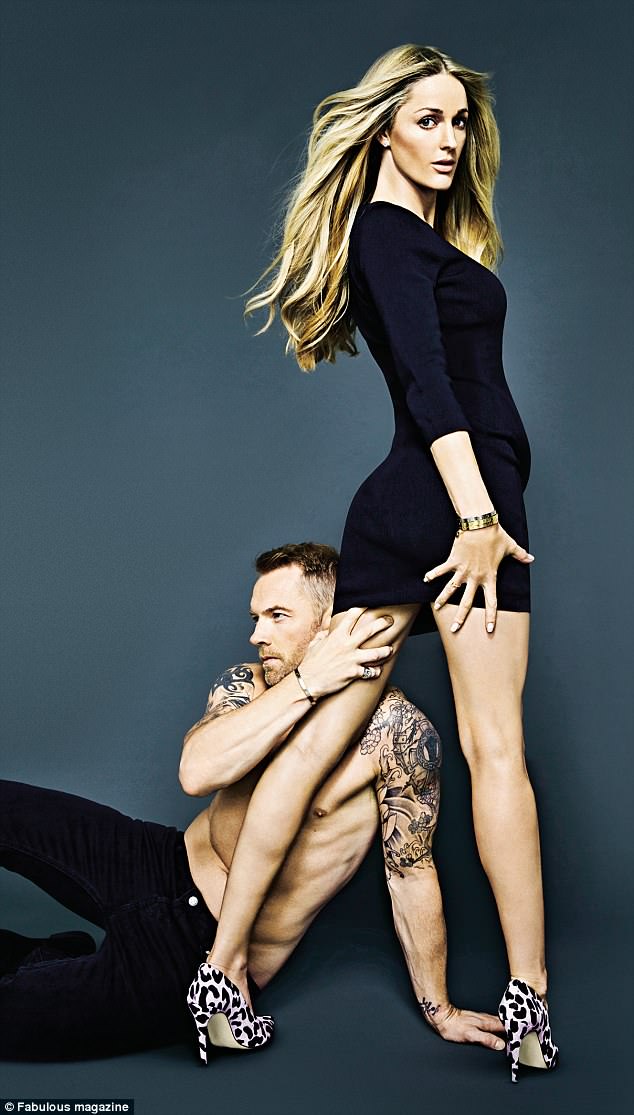 ‘Being famous is a Faustian deal: you get financial security, but for that you lose your life. When it all ended, I didn’t miss it for a moment. These days I don’t drink. I do a lot of meditation and studying of different philosophies. Being in the band taught me to treasure the most important things in life: family, love and good emotional and mental health.’

Duffy, 43, has been a presenter on ‘The Box’ and appeared in ‘Mrs Brown’s Boys’ and ‘Coronation Street’. He has also teamed up with Westlife star Bryan McFadden to tour as Boyzlife.

‘When I was picked to be in Boyzone I was 19. Louis Walsh told me one condition of being in the band was we weren’t allowed girlfriends. My response was, “I’m sorry Louis. I’ll have to say no because I can’t be gay.” I was pretty unsophisticated. I’d never even met anyone who was homosexual before and when Louis was trying to explain the politics of boy bands, I just assumed he was saying he couldn’t have heterosexuals in the group.

‘Boyzone was a steep learning curve for me. I became incredibly protective over the way Stephen was treated because of his sexuality. In 1999 he was forced to come out as gay by a newspaper, which was just awful for him in the way it was done. He had less than a day to tell all his family, but the incredible thing was the public reaction. Everyone was just so supportive. It was the same after he died and a lot of terrible stuff was written. We were broken by losing Stephen.

‘We were all Irish mammies’ boys who had never left Ireland before and none of us were prepared for what lay ahead. But we also learned very fast to ignore Louis because all of us – apart from Stephen – had girlfriends and the girlfriend I had then is now my wife.’

Boyzone’s album ‘Thank You And Goodnight’ is out on Nov 16 on East West. For tour tickets, visit boyzonenetwork.com