Bradley Cooper held hands with his daughter Lea as they zigzagged their way through New York City on Monday.

The actor, who recently celebrated his 48th birthday, was all bundled up for his laidback jaunt through the big city.

The handsome star sported a crisp navy blue coat over a plain white T-shirt in addition to a black beanie plopped over his head.

Bradley finished off the look with gray slacks and comfortable brown sneakers.

He carried a pair of backpacks in one hand while he held Lea’s hand in the other.

Their appearance out in the city came just a couple days after Bradley celebrated his 48th birthday.

For Bradley’s birthday, actress Jennifer Garner shared a throwback photo of them on her Instagram story.

Coat: The 48-year-old actor wore a navy blue coat with big buttons holding the jacket together. He wore a white t-shirt under the coat 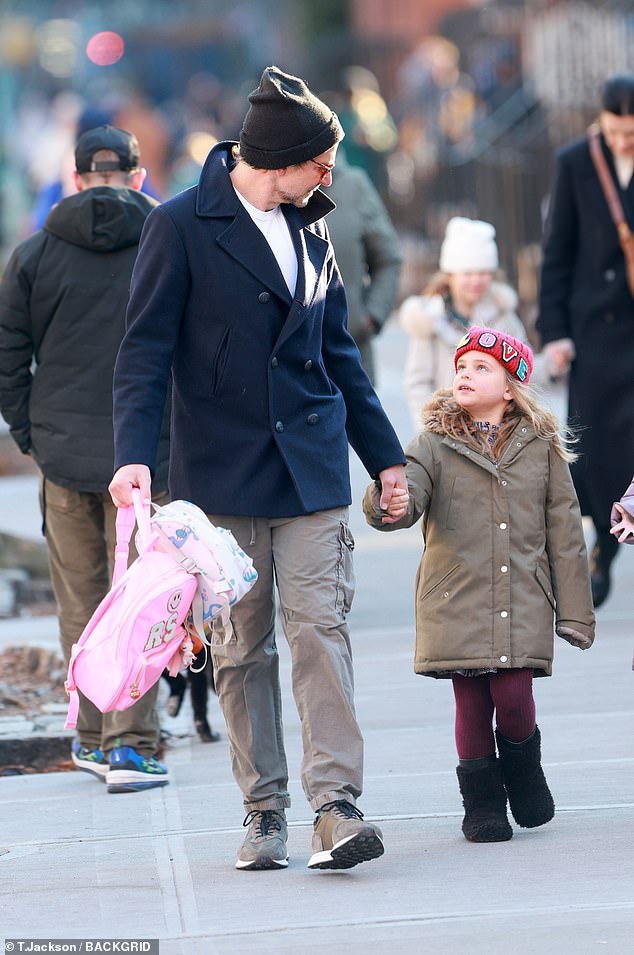 She wrote in the story: ‘You’re not on social media, so I can embarrass you — happy birthday Bradley.’

The picture was from when they shared the screen in the spy thriller TV series Alias from 2001 to 2006 as Sydney Bristow and Will Tippin.

Both were dressed up in outlandish costumes in the shot. The show was about a woman that learned she had a familial history of undercover work and agreed to become an international spy for a supposed secret branch of the CIA.

Bradley and Irina retained a famously close co-parenting equation since their split in 2019 after a relationship that lasted four years. 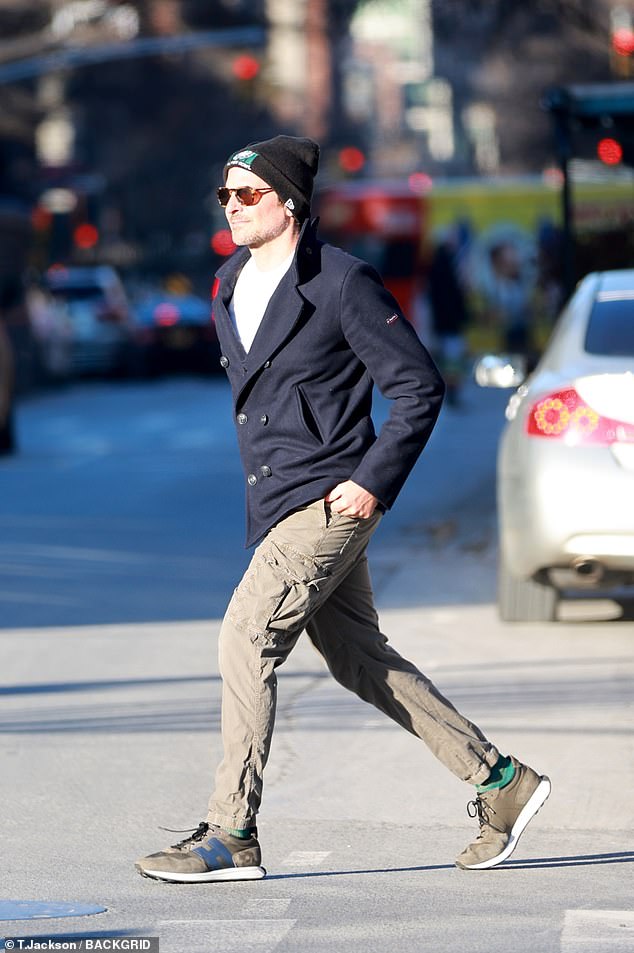 Birthday boy: Their appearance out in the city came just a couple days after Bradley celebrated his 48th birthday 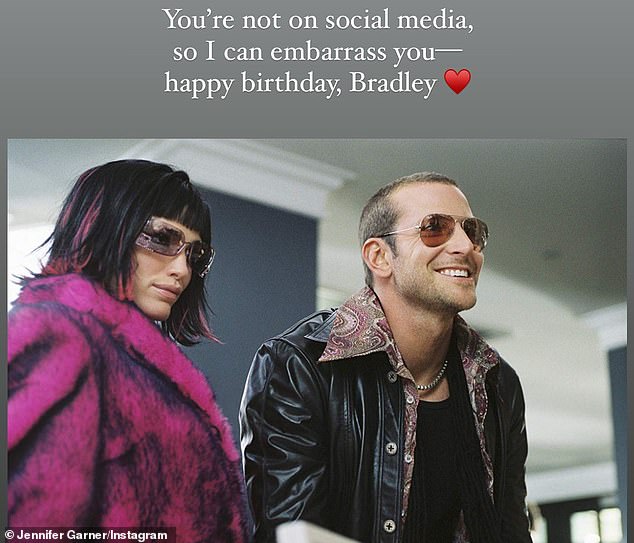 Old friends: Jennifer Garner shared a throwback photo with Bradley for his birthday from when they were on the spy thriller TV series Alias together

Reunion rumors went into overdrive last month when they were spotted getting affectionate during a stroll in New York.

At that time there was even speculation that Bradley and Irina were mulling the prospect of having another baby.

Irina applauded Bradley for being ‘the most amazing dad’ and a great co-parent in her interview for the cover of Elle in 2021.

She said: ‘I never understood the term co-parenting. When I’m with my daughter, I’m 100 percent a mother, and when she’s with her dad, he’s 100 percent her dad. Co-parenting is parenting.’ 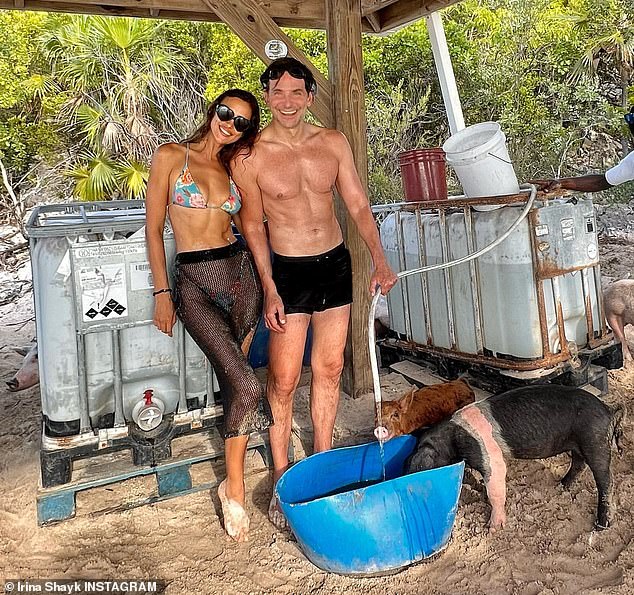 Maybe just rumors: The pair ignited reconciliation rumors after going on vacation and spending Thanksgiving together 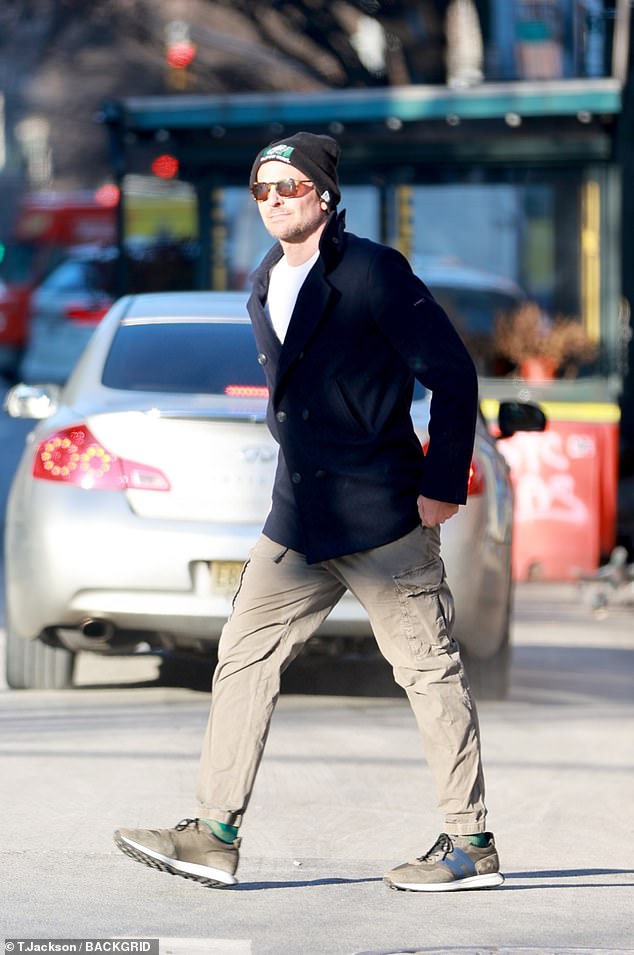 Directing: Bradley is currently directing Maestro, a biopic of Leonard Bernstein, the Broadway composer of such legendary shows as West Side Story and Candide

Bradley is currently directing Maestro, a biopic of Leonard Bernstein, the Broadway composer of such legendary shows as West Side Story and Candide.

Leonard was married to Chilean actress Felicia Montealegre from 1951 until her death of cancer in 1978 in spite of the fact she knew he was gay.

Bradley is playing the leading man, with Carey Mulligan as Felicia in a cast that includes Maya Hawke, Matt Bomer and Sarah Silverman.