Brave elderly woman, 84, confronts bleached-blonde home intruder after she ‘stole her phone and keys’ while she was watching television

An elderly woman has chased down a bleached-blonde intruder after she broke into her home while she was watching television.

The victim, 84, was watching TV in her Patterson Lane home in North Melbourne when she realised a stranger had broken in at around 1.30pm on Thursday.

CCTV footage captured the moment the victim confronted the thief after chasing her out onto the street, TV remote still in hand.

It is alleged the intruder crept into the home and stole a mobile phone and set of keys.

As the elderly woman confronts the thief, dressed black slacks and slippers, a male appears who police believe was acting as look out.

After making the woman open her bag up, the victim failed to prove anything, and the pair were able to walk away.

Victoria Police have released the footage as they believe the man and woman may be able to assist with their inquiries.

The 84-year-old lady (pictured in coral cardigan) chased the thieves who she alleges stole her mobile phone and a set of keys out onto the street, making the lady open her bag to search through it

The woman is described as aged between 30-45-years-old, thin build with bleached-blonde hair.

The man is described as 180-190cm tall, thin build and was wearing a distinctive jumper with ‘H’ on the back.

The victim was not physically injured during the incident. 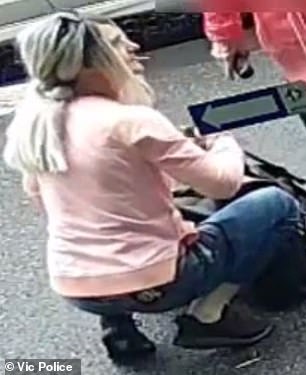 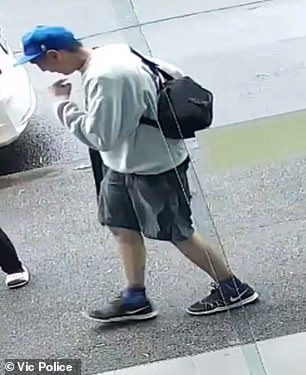