Researchers have discovered a potentially breakthrough cancer treatment that cured mice of the disease in as little as only a week.

The devices were tested on mice suffering from both ovarian and colorectal cancer to great success.

While there is still a long way until this type of technology will be available for humans, the researchers are hopeful they can start human trials for the device as early as this year.

Researchers, who published their findings last week in Science Advance, describe the device as a ‘translatable cytokine delivery platform.’

A cytokine is a small protein that causes inflammation, which as immune response to a variety of bodily issues.

Interleukin-2, a type of cytokine, has been approved by the Food and Drug Administration for treatment of some cancers.

Researchers note that high dosages of the drug injected into a person can prove to be toxic and dangerous, though.

‘A major challenge in the field of immunotherapy is to increase tumor inflammation and anti-tumor immunity while avoiding systemic side effects of cytokines and other pro-inflammatory drugs,’ Dr Amir Jazaeri, a gynecology professor at Rice a co-author of the study, said in a statement.

They developed the drug factory in an effort to get around this issue.

The bead-like device is placed in the body either on or near the cancerous tumor. It then continuously creates compounds that direct the immune system to the tumor – hence the ‘factory’ moniker.

It also have a protective coating to prevent it from being destroyed by the immune system before it arrives at its wanted destination.

‘In this study, we demonstrated that the ‘drug factories’ allow regulatable local administration of interleukin-2 and eradication of tumor in several mouse models, which is very exciting,’ Jazaeri said.

For some patients, one factory is enough, but some may require multiple to generate the necessary dosage. 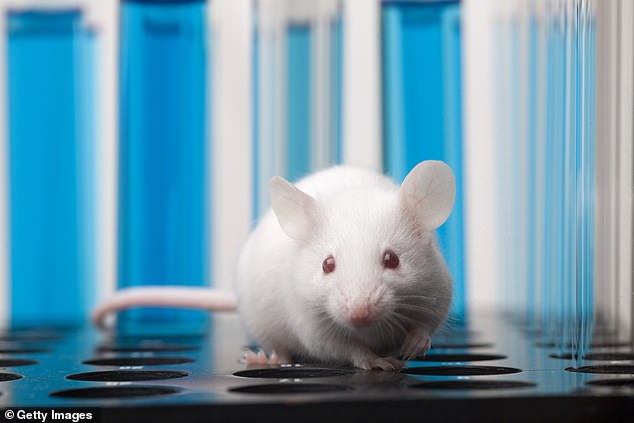 ‘We just administer once, but the drug factories keep making the dose every day, where it’s needed until the cancer is eliminated,’ Dr Omid Veiseh, a bioengineering professor at Rice, said.

‘Once we determined the correct dose — how many factories we needed — we were able to eradicate tumors in 100 percent of animals with ovarian cancer and in seven of eight animals with colorectal cancer.’

Veiseh said that he expects to start human clinical trials for this device as early as this fall, and that the team would like to use these factories to help humans as soon as possible.

Dr Amanda Nash, co-author of the study, said she believes the devices could also be altered to use against pancreas, liver and lung cancer, among others.

Colorectal cancer, which effects the colon and rectum, is diagnosed in around 150,000 Americans every year, and is the third leading cause of deaths among men and women in the U.S., according to the American Cancer Society.