Retired football legend, Brett Favre, had secretly sought help for addition issues two times, besides his well publicized rehab stint in 1996 for an addition to painkillers.

King writes, ‘This weekend… I found out something I never knew: I thought he went to rehab to kick his addictions once. Triple that.’

King recalled interviewing Favre in 1995, over the course of several nights. The columnist noted how much energy the Green Bay Packers quarterback had, but unbeknownst to him- it was drug fueled energy. 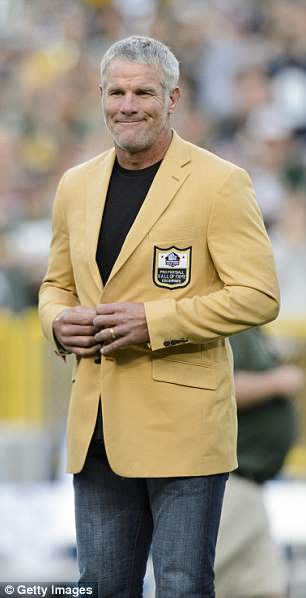 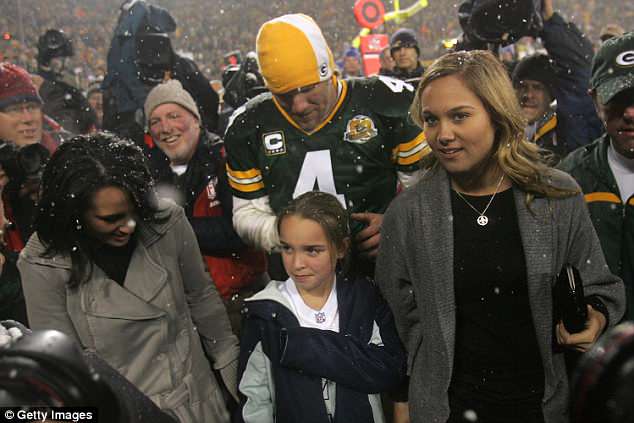 Favre says it was his wife Deena (left) who convinced him to get help for his addiction issues, pictured with their daughters (right) Brittany and (middle) Breleigh in 2008

‘Oh, I remember that week,’ Favre told King. ‘You thought, “Man, this guy is high on life.” You didn’t know there was a reason for it. It is really amazing, as I think back, how well I played that year. That was an MVP year for me.’

Favre explained how his addiction had a vicious hold on him, with his first thought in the morning being ‘I gotta get more pills.’

‘I took 14 Vicodin, yes, one time. I was getting an hour or two of sleep many nights. Maybe 30 minutes of quality sleep. I was the MVP on a pain-pill buzz. The crazy thing was, I’m not a night owl. Without pills I’d fall asleep at 9:30. But with pills, I could get so much done, I just figured, “‘This is awesome.”‘

‘Little did I know Deanna (his then fiancée and now wife) would be finding some of my pills and when she did, she’d flush them down the toilet.’

‘I saw the most successful, smart people, doctors, professional people, lose it all, ruin their lives. A year or two before you saw me, I went to a place in Rayville, La., just outside Monroe. It was pills then too.’

He went on the urging of his wife Deanna and his agent at the time, despite saying he had not yet come to terms with the fact that he did indeed have an addiction.

‘I didn’t think I had a problem, but they talked me into it. I went for 28 days. When I got out, I was able to control myself for a while. I wouldn’t take anything for a day or two, and I wouldn’t drink.’

The football legend also said at first he did not understand that pills weren’t his only issue. He believed he could still drink.

‘But I was a binge drinker. When I drank, I drank to excess. So when I went in the second time, to the place in Kansas, I remember vividly fighting them in there. They said drinking was the gateway drug for me, and they were right, absolutely right, but I wouldn’t admit it.’ 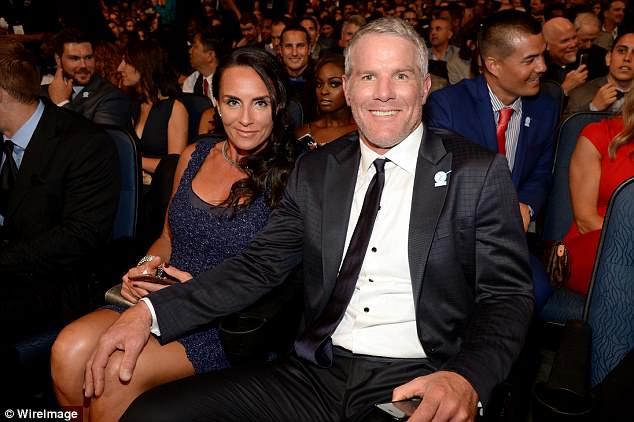 ‘I will never forget one of the nurses. I had it all figured out. I fought with this nurse all the time. I would not admit the drinking problem. At the end she said to me, ‘You’ll be back.’

He says of course that nurse was right.

‘I was back. 1998. Guess who was waiting there when I walked in… that same nurse. This time it was strictly for drinking. I didn’t go back to the pills. I admitted my problem, I was in there 28 days, and it worked.’

Favre said the hardest part with quitting drinking was figuring out how to live without it, and realizing activities in his life revolved around booze in ways he did not expect.

‘When I got out, the toughest thing was the first three months, because I had to change my thought process. When I played golf before, I realized the only reason I wanted to play was to drink. After a while, instead of thinking, ‘How many beers can we drink in 18 holes?”‘ I fell into a pattern of what could I do to get good at golf. I realized with each passing day I really didn’t like drinking.’

Favre, who played 321 straight games during his career, a record for a quarterback, retired in 2010 after nearly 20 years in the NFL.

In King’s final column he thanks Favre for ‘being the most compelling person I’ve covered in my 29 years here.’