Brett Kavanaugh once described his high school friends as a ‘group of obnoxious drunks’ in a letter written ahead of a week of partying in a Maryland condo.

Kavanaugh made the remark in a letter he wrote to eight of his Georgetown Prep classmates in 1983 as they descended on a property in Ocean City for ‘Beach Week’.

The letter mostly gives instructions for those arriving at the condo ahead of him, but also includes several off-the-cuff remarks that have taken on new significance after he was accused of assaulting multiple women while drunk.

Brett Kavanaugh wrote to seven of his Georgetown Prep classmates in 1983 as they prepared to descend on a Maryland condo for ‘Beach Week’, saying: ‘We’re loud obnoxious drunks with prolific pukers among us’ 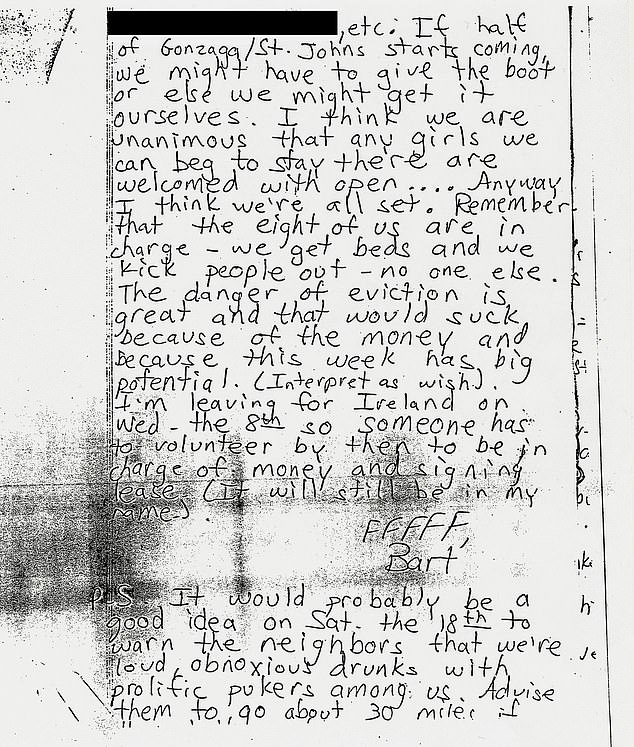 A section of the letter Kavanaugh wrote to eight of his Georgetown Prep classmates in 1983 as they descended on a property in Ocean City for ‘Beach Week’, including a suggestion the neighbors should be warned of ‘loud, obnoxious drunks’ heading their way

The existence of the letter was uncovered by the New York Times, which printed two photocopied pages of it on Tuesday.

In it, Kavanaugh expresses his fear that they could be kicked out of the property as the partying gets underway.

He makes it clear that limits will have to be placed on other boys coming along from school, saying: ‘We might have to give the boot or else we might get it ourselves.’

But, as far as women are concerned, his says: ‘I think we are unanimous that any girls we can beg to stay there are welcomed with open… Anyway, I think we’re all set.’

He the adds: ‘Remember that the eight of us are in charge – we get the beds and we kick people out – no one else.

‘The danger of eviction is great and that would suck because of the money and because this week has big potential (interpret as [you] wish.)’

In a post-script, he says: ‘It would probably be a good idea on Saturday the 18th to warn the neighbors that we’re loud, obnoxious drunks with prolific pukers among us. Advise them to go about 30 miles.’

The Times contacted Kavanaugh about the letter, who confirmed that he wrote it ahead of ‘Beach Week’ in the summer of 1983, but refused to comment further.

The letter has the initials ‘PJ’ at the top, likely a reference to Patrick J. Smyth, a friend from high school who remains close to Kavanaugh to this day.

It is not known exactly who the other seven recipients are, though it likely included Mark Judge, another friend from high school who has been accused of being present when Kavanaugh carried out his alleged assaults at similar events.

It is also significant that the letter is signed ‘Bart’, a name that Judge has used in his memoirs to describe a hard-drinking friend. 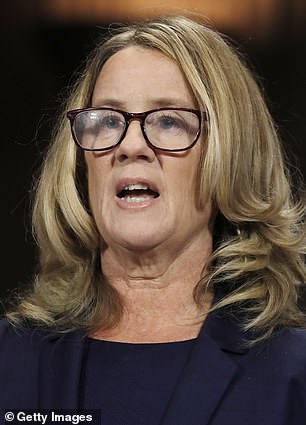 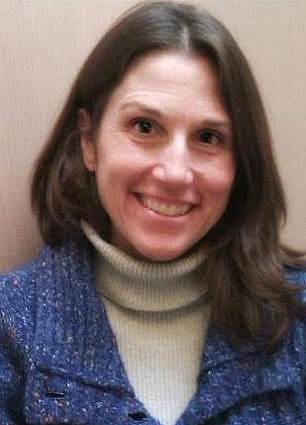 Kavanaugh’s history of drinking and partying in high school has come under scrutiny after Christine Blasey Ford (left) accused him of attempted rape at a gathering, and Deborah Ramirez (right) accused him of exposing himself at a party 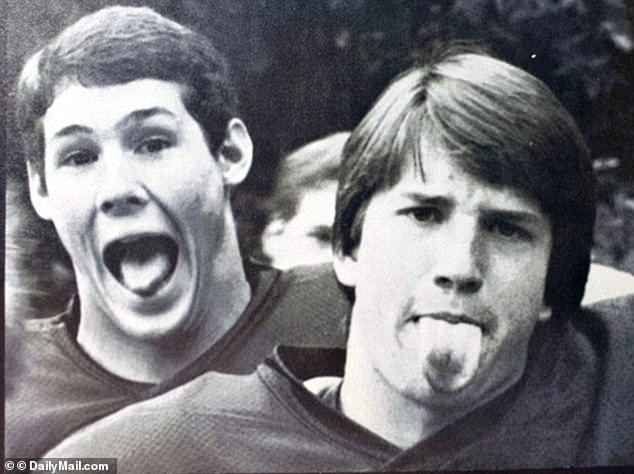 The letter is also signed Bart, a name which Kavanaugh’s friend Mark Judge (pictured together with Judge on the left) has used in his memoirs to describe a hard-drinking friend who once ‘puked in someone’s car’ and ‘passed out on his way back from a party’

Judge wrote that a friend by the name of Bart O’Kavanaugh had once ‘puked in someone’s car’ and ‘passed out on his way back from a party’ while describing a culture of ‘blackout drinking’ at high school.

Senators grilled Kavanaugh over the name when he came before the committee when he claimed he didn’t know who Judge was referring to.

Both Smyth and Judge have been questioned by FBI agents conducting a background check into Kavanaugh following Christine Blasey Ford’s claims that he attempted to rape her at a high school party.

Ford came forward with her allegations after Kavanaugh was nominated to the Supreme Court, believing it was her duty to make her story known.

Also questioned by agents is Deborah Ramirez, who says Kavanaugh exposed himself to her at a similar party, also in the 80s.

Agents are due to hand a report on Kavanaugh to senators this week, who will then vote on whether to confirm him to the lifetime post.

Senator Jeff Flake, who halted the nomination process so the FBI could investigate Kavanaugh, has indicated that he would vote ‘no’ if it could be proven that the judge had lied in his testimony.

That makes the letter problematic for Kavanaugh, who told Amy Klobuchar during his hearing that he had never drunk so much he forgot part or all of what happened the night before.

In a testy exchange, Kavanaugh asked Klobuchar whether she had ever blacked out due to drinking, to which she replied: ‘I have no drinking problem, Judge.’

Senate majority leader Mitch McConnell has said that he is ‘certain’ the FBI report into Kavanaugh will be completed this week, with a vote shortly after.

Republicans are keen to have the issue done and dusted before the November mid-terms, amid the fear that both the House and Senate could flip back to Democrat control, leaving Trump a lame duck.

Indeed, Trump claims his only stipulation to the FBI when he ordered the investigation was that it be completed quickly.