Boris Johnson will intervene in post-Brexit trade talks with the European Union this week as he tries to personally break the negotiating stalemate, it was claimed today.

The Prime Minister is said to be preparing to call Ursula von der Leyen, the President of the European Commission, in a last ditch bid to get the deal over the line.

Brussels has set a deadline of next Tuesday for all remaining points of contention to be resolved.

There is growing optimism a deal will be done but there are still major disagreements on the two crunch issues of fishing rights and state aid.

Talks have been hampered after a member of Michel Barnier’s team last week tested positive for coronavirus, prompting top-level discussions to be suspended. 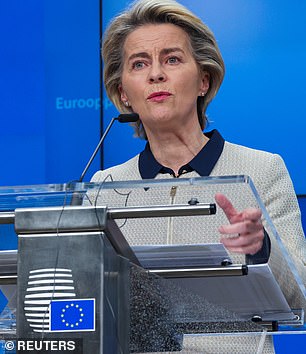 Officials have continued to negotiate remotely but it is hoped face-to-face talks between Mr Barnier and his UK counterpart Lord Frost will be able to resume on Thursday.

There are now just eight days until the EU’s negotiating deadline which Brussels feels is necessary because of the amount of time it will take to ratify and implement the deal.

The ‘standstill’ post-Brexit transition period will come to a close at the end of December, giving the two sides less than six weeks to get everything agreed and rolled out ahead of January 1.

The Telegraph reported Mr Johnson is planning to speak to Ms von der Leyen directly in the coming days as the talks enter the ‘final push’.

A UK source told the newspaper that ‘both sides seem to think we will get there’ but that ‘nothing is certain’ because Britain and the bloc have dug in on their negotiating red lines on key issues.

The source said: ‘The negotiators are nearly there on an awful lot of things, but the areas of disagreement – state aid in particular – cuts across a lot of other areas.

‘We are not in the final moments yet but this week will see the start of the final push.

‘I would expect that at some point this week the Prime Minister or Ursula von der Leyen will have to make an intervention.’

It came as it was claimed the UK will reject an EU demand to insert a review clause into the deal on fishing rights.

The clause would allow the bloc to reopen negotiations on fishing quotas in 2030 if member states were unhappy with the new relationship.

One diplomat told The Times: ‘This is an idea on the European side to try and get a deal across the line for EU countries at the final moment. It is not yet in the draft but probably will be.’

However, the suggestion of reopening the trade deal to renegotiate in a decade’s time is viewed as a total non-starter by the UK.

Chancellor Rishi Sunak said yesterday the UK should not be going for a Brexit deal ‘at any price’ as he insisted he has confidence in the British economy ‘in all circumstances’.

He told the BBC: ‘I think we’re making progress in the talks and I remain hopeful that we can reach resolution.

‘I think we’re being entirely reasonable with our requests and have been consistent and transparent through this process about what’s important to us. But we will prosper in any eventuality.’