Nick Pope was trending on Twitter this week, bizarrely after Newcastle supporters hijacked a Burger King poll about tomatoes and gherkins to say their goalkeeper was better than both.

The puns pretty much write themselves after a performance like this. Pope was flipping good – my apologies – and made a series of whopper saves – again, apologies – to ensure Newcastle left Brighton with something to show for their efforts on a sweltering day.

The supporters recognised his contribution, too, chanting ‘England’s No 1’ whenever he denied the hosts at the Amex Stadium. His saves – and a super goal-line clearance from Kieran Trippier – were enough to send Newcastle back to the North East pleased with a point. 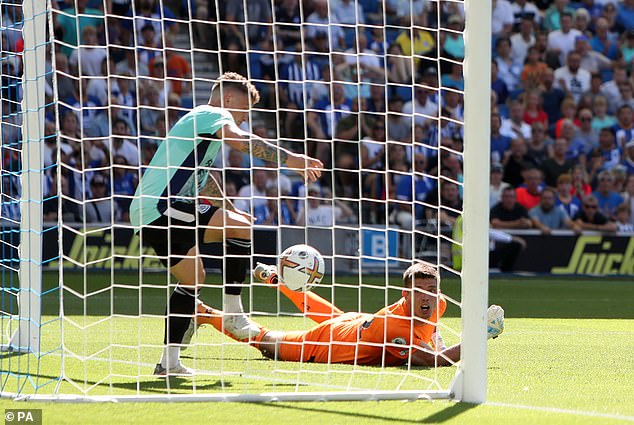 Two games, two clean sheets for the man who could prove a steal at £10million. Newcastle may be the world’s richest club, but even the wealthy can appreciate a bargain.

‘I don’t really understand it – the Burger King stuff!’ Howe said afterwards. ‘He was top class today and he has been since he came to the club. He’s a relaxed figure and popular in the dressing room. He showed his importance to us. It was a difficult second half for us. Brighton were good.’

That they were. Brighton left disappointed, feeling they created enough chances to win this game. But then that’s long been their problem – lots of promising build-up play, but not much end product.

‘I wouldn’t say we’re happy with a point,’ said Graham Potter. ‘If there was one team that would win the game, it was us. The keeper made some good saves. It can happen. That’s football.’

Neal Maupay was absent from Brighton’s squad with the forward set to sign for Nottingham Forest for £15million. Whether they’ll miss Maupay – a handful up top – remains to be seen. 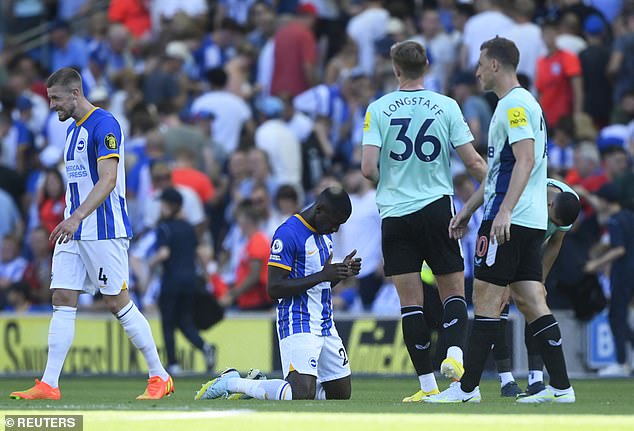 They didn’t miss him at Old Trafford last weekend, after all. Maupay watched from the substitutes’ bench as Brighton beat Manchester United 2-1. There were plenty of players who impressed that day, none more so than Moises Caicedo. One tackle from the midfielder here, killing an Allan Saint-Maximin counter-attack, received a rousing reception from the supporters early on.

Brighton were showcasing some nice football, as is so often the case under Potter.

Yet it was Newcastle who had the ball in the back of the net within 15 minutes. Callum Wilson had scored, and the Newcastle supporters were celebrating, but referee Graham Scott ruined their fun. He disallowed the would-be opening goal for a high foot by Wilson in the build-up.

‘My initial reaction was it was harsh,’ Howe later said. ‘It wasn’t to be.’ 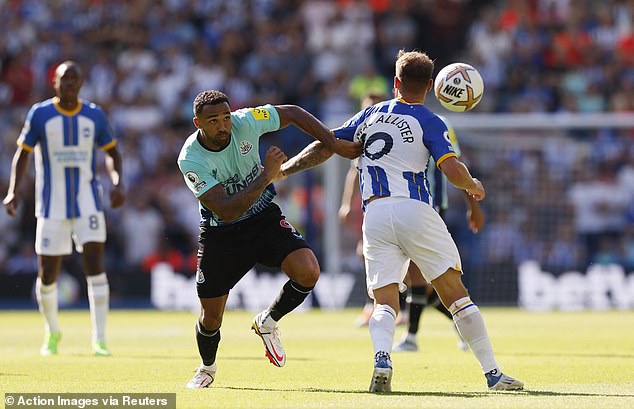 Whether right or wrong, it was a sign of Newcastle growing in the game after Brighton’s nice start. In the 22nd minute, Saint-Maximin threw himself to the floor when breezing by Alexis Mac Allister, hoping to win his team a free-kick in front of the box. Scott saw it for what it was – an obvious dive – and carded the Newcastle forward.

In the 32nd minute, it was the turn of Brighton supporters to think they had scored. After Danny Welbeck won the ball high up the pitch, Solly March’s shot beat Pope – but not Trippier, the right back who had retreated to scramble a goal-line clearance.

Scott checked his watch – only three quarters of the ball had crossed the line, so play continued.

You could call this the ‘Dan Ashworth Derby’ – the sporting director who left Brighton for Newcastle in the summer. Pope was one of the names brought in and he was needed before the break when Adam Lallana stung his palms after spinning and shooting in the box. 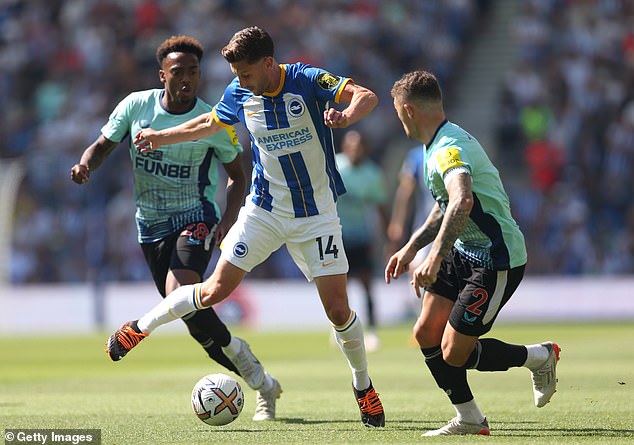 Lallana had a better chance to score at the start of the second half when March’s cross found him. His free header looked destined for the corner but Pope clawed it away brilliantly with one hand.

As if it wasn’t hot enough at the Amex Stadium, a heated exchange between Joelinton and March saw a scrap ensue. Scott booked them both for the handbags while Trippier implored with his team-mates to keep their cool, as difficult as that was in 31-degree heat.

Newcastle were clinging on for the final half hour. Dan Burn – the defender formerly of Brighton – made a goal-saving contribution when it looked like Welbeck was about to tap in the opener. He slid in to ensure it stayed 0-0.

Pope then denied March after Enock Mwepu’s cut-back, the home support again getting the sense that the opposition goalkeeper was having one of those days.

In the 82nd minute, Brighton thought they had finally found the breakthrough. Joel Veltman’s shot deflected off Burn but as it was about to cross the line, Fabian Schar cleared.

In the 84th, debutant substitute Kaoru Mitoma cut the ball back to Pascal Gross, who aimed for the bottom corner. He sent it wide. This wasn’t his day – not like last weekend at Old Trafford where he had the golden touch, scoring twice as Brighton humbled Manchester United.

It finished 0-0. Newcastle left happier with that than Brighton and you can only hope the team coach stopped at a Burger King on the way home. Pope earned it.