This is the terrifying moment a British sailor was surrounded by a pod of killer whales which tried to capsize his boat ‘so they could eat him’.

Alan Bruce, 63, was manning a 44ft sailing yacht in the Gibraltar Strait with Frenchman Stephen Peare, 49, when four orcas suddenly began ramming and rocking the vessel in a bid to throw them off.

The pair managed to record a short clip of the mammal family, which consisted of an 18ft male, a female and their two calves.

The experienced sailors retreated below deck and radioed for help before enduring 90 minutes of harassment from the animals as they repeatedly shunted the hull of the boat.

They also deliberately broke the rudder to disable the yacht, in what Mr Bruce described as ‘payback’ for humans overfishing their natural habitat.

Alan Bruce, 63, (pictured) was manning a 44ft sailing yacht in the Gibraltar Strait with Frenchman Stephen Peare, 49, when four orcas suddenly began ramming and rocking the vessel in a bid to throw them off

Mr Bruce, from Ferndown, Dorset, is convinced he and Mr Peare were being ‘eyeballed as food’ by the four orcas.

He said: ‘Something hit beneath the boat and when I looked back the orca was there. There was a whole family of them. The male was a big boy, about 18ft long.

‘I rushed to switch off the engine and all the electric and just let them play with the boat.

‘They can travel at 34 miles an hour and could crash the boat if they wanted to. They’re not to be messed and I didn’t want to make them aggressive.

‘We went down below deck because when we looked over the side at them they were eyeballing us for food.

‘We could feel the force of these creatures pushing the sides of the boat and there was nothing we could do – it was a 10 tonne boat and they were pushing it sideways.

‘They are very intelligent animals and they were trying to get at the rudder to disable the boat. I’ve read reports of orcas attacking boats and they always go for the rudders.

‘They snapped the main rudder but we could still steer the vessel with an emergency steering system.

‘We manoeuvred it to a port 10 miles north. It was nighttime by this point so I had to bring it into dock in the dark. When we arrived we had to open a bottle of whiskey just to calm the nerves.’

The two men were sailing a Jeanneau 479 yacht from Cartagena, Murcia, to Portugal on behalf of a client when they came under attack.

Luckily the pod of whales eventually left the vessel alone and Mr Bruce and Mr Peare were able to limp it 10 miles to the nearest port at Barbate in southern Spain. 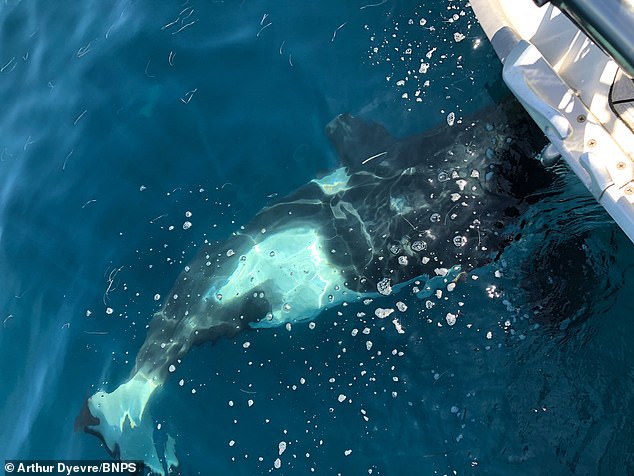 The whales deliberately broke the rudder to disable the yacht, in what Mr Bruce described as ‘payback’ for humans overfishing their natural habitat (Pictured: Killer whale attacking the boat of Arthur Dyevre)

The alarming episode is the latest exchange between killer whales and private yachts in the waters of the Iberian Peninsula.

It is said that as the mammal’s natural food sources in the area become scarcer, confrontations between the two are becoming alarmingly common.

There were 45 incidents recorded between July and November last year when mostly young orcas interfered with boats, in many cases damaging the rudders.

Mr Bruce docked at Barbate on Monday night where he remained for several days to repair the boat.

During his time there he said that three other vessels were rescued by lifeboat crews after they were attacked by orcas, making it a ‘daily occurrence.’

The father-of-two said: ‘The emergency crews here are saying it’s happening every day – at least two or three times daily.

‘I think it’s all to do with global warming and over-fishing. We’ve been over-fishing their waters and now it’s payback time.’

French sailor Arthur Dyevre, 22, was also rescued after his 38ft sailing boat sustained a two hour attack by a pair of adults with their calf.

He said: ‘We saw them coming and thought they were dolphins, but they just kept getting bigger and bigger.

‘We cut the engine off and they started hitting against the boat, spinning it around like crazy for about 45 minutes.

‘Then another boat arrived and they moved to that. By the time the rescue team came they had pushed our two boats closer together by around 300ft.

‘The rescue team did laps around our boats for around an hour to scare the orca away. We thought it was never going to end.

‘The people in the other boat were terrified – at one point they screamed and said they were letting in water.’