As lockdown in Wuhan is finally lifted, a 32-year-old British expat who has been working in the city for several years sends this vivid despatch on the realities of freedom.

At midnight on Tuesday, I was woken up by whoops and cheers of ‘Come on Wuhan’ as my neighbours in this city of 11 million that spawned the coronavirus pandemic celebrated the formal end of quarantine after 77 long, frustrating days.

For a week, I’d been permitted to leave my compound on specific errands for up to two hours, but yesterday was the first day that I could come and go as I pleased.

The shops are reopening so I can buy razors and give myself a proper shave – re-using the same razor for almost three months has been a nightmare. I can finally get a haircut, too.

And some restaurants have resumed service.

Lockdown in Wuhan has finally lifted. Pictured: Chinese health officials wearing protective white suits as travellers from Wuhan gathered to be taken into quarantine after arriving by train

The first thing I did was to go to my favourite noodle restaurant for its beef special that is so delicious I’ve had it for breakfast, lunch and dinner on the same day.

The local Starbucks is busy and a nearby bar has just had its first beer delivery for more than two months. Before the virus hit, life in China was all about convenience. If you wanted to get a toothbrush delivered at 4am, then you could.

If you fancied something different, tough. I went out early yesterday morning and was surprised by the number of people and cars on the streets.

But it was rush hour and the crowds were an indication of a widespread return to work.

Roadblocks on highways leading in and out of the city have also been removed.

Life is being breathed back into the city, which is the capital of Hubei, a province that has suffered 67,803 cases of Covid-19 and 3,213 deaths, according to official figures. 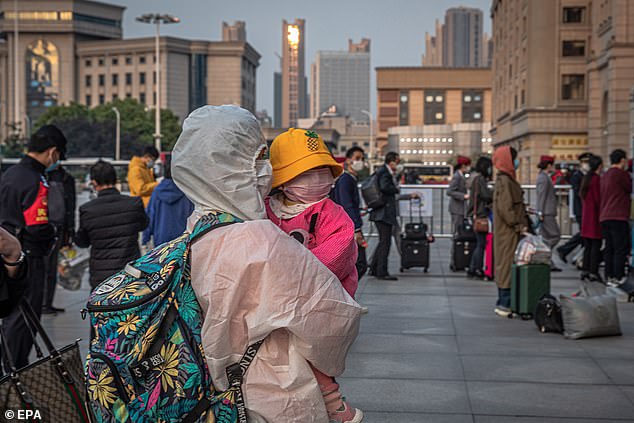 Life is being breathed back into the city, which is the capital of Hubei, a province that has suffered 67,803 cases of Covid-19 and 3,213 deaths, according to official figures. Pictured: Passengers wait to enter the railway station after the lockdown was lifted in Wuhan, China

Citizens can now travel between cities again and the local airport is back in business.

There were no fewer than 200 flights scheduled to depart Wuhan yesterday, carrying 10,000 passengers.

Tens of thousands more left on 100 high-speed trains. Day care centres, schools and colleges remain shut dependent on a ruling from Beijing on when they can reopen, but it surely won’t be long.

Yes, normality is returning but darker undertones persist. Freedom after so long is welcome but nerve-wracking.

Every few days, security guards come banging on my door – it can happen early in the morning or late at night – and three people in full protective clothing, visors and masks will come and have a look around my apartment and check me for signs of fever with a ‘thermometer gun’. 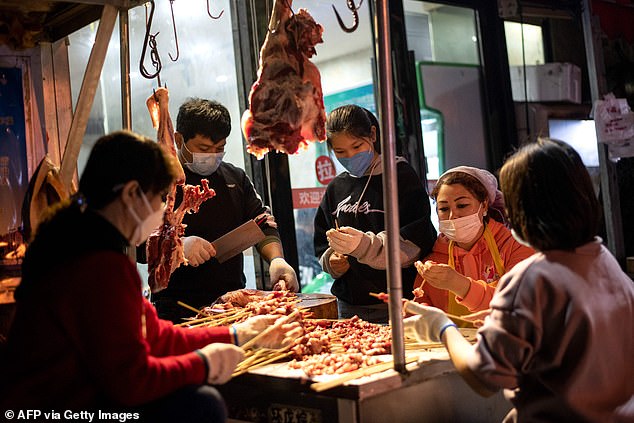 The 32-year-old British expat said: ‘Freedom after so long is welcome but nerve-wracking.’ Pictured: Workers wearing facemasks make a barbecue at a market in Wuhan

Another person records the procedure on a mobile phone.

Out on the streets it’s the same story – security guards armed with thermometer ‘guns’ to do spot checks maintain a highprofile presence, while trucks cruise the streets spraying disinfectant.

And many people are continuing to wear facemasks. There is still tension and wariness here.

Cough or sneeze on the street and people will cross the road to avoid you. Anyone who looks sick is treated like a leper.

To Western eyes, the mass surveillance and monitoring is draconian.

Each citizen is allocated a unique QR code, via the WeChat app, that serves as proof they are healthy.

The QR code is linked to an individual’s government ID card and includes details of a blood test and health check that show they are virus-free.

No one is allowed to leave a gated community, use public transport or visit shopping malls or buy food without having scanned their code.

Foreigners like me are not entitled to a QR code. I carry a letter from my doctor testifying to my virus-free status which I show along with my ID card.

This is the reality that has replaced lockdown now. To be checked and checked again.

Will it be enough to stop a second wave of infections? I hope so.

Wuhan is paying a high economic price for the lockdown.

The seafood market identified as the most likely source of this new strain of coronavirus outbreak remains sealed off by blue police tape, and is heavily patrolled by officers.

Walk down any street and you will see stores that have been abandoned because retailers can no longer afford to pay the rent.

Clothing shops, speciality restaurants, and even some banks are still closed with trash piling up outside.

No wonder many of the people who came to Wuhan from the countryside to find work left at the first opportunity yesterday. But people are returning.

The Wuhan quarantine was put in place during the Spring Festival, as the Chinese New Year celebration is known, a time when many people had left the city to visit family in their hometowns.

From my window I see young couples laden with luggage moving back to homes they have not lived in since January.

And this brings me to a problem that many here might rather stayed hidden.

Some of those who left Wuhan to celebrate the beginning of the Year of the Rat elsewhere, left their cats, dogs and other pets behind with enough water and food for a few days.

After all, they’d be back very soon…