A midnight snack turned into an all out brawl at a Tennessee IHOP, ending with one man being sent to the hospital and a load of broken dishes.

Police were called to an IHOP in Memphis, Tennessee, on March 16 at 12.40am, following a reported assault.

A manager at the IHOP told a group of five people to leave the restaurant when they wouldn’t stop behaving in an loud and unruly manner, police told WREG. 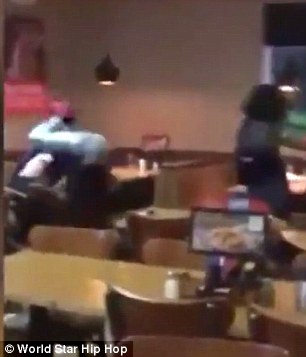 The IHOP manager, Mohammad Al Hourani, 28, said he asked a party of five unruly patrons to leave the restaurant. In a video, he and the patrons can be seen physically attacking each other

The manager, later identified as Mohammad Al Hourani, 28, told authorities that the group left their table and started heading for the exit, yelling as they walked. Then, Al Hourani said, one of the people in the party attacked him. As the two tussled, other people threw dishes and chairs at them.

The brutal late night fight was captured on video by a bystander.

In the video, a blue polo shirt-wearing Al Hourani can be seen being thrown to the floor by several people, who proceed to kick and punch him.

A person wearing a black tank top then puts Al Hourani in a headlock and drags him length of the restaurant, until the reach a banquette, where they proceed to fight some more with the Al Hourani eventually body slamming the tank top-wearer to the ground. 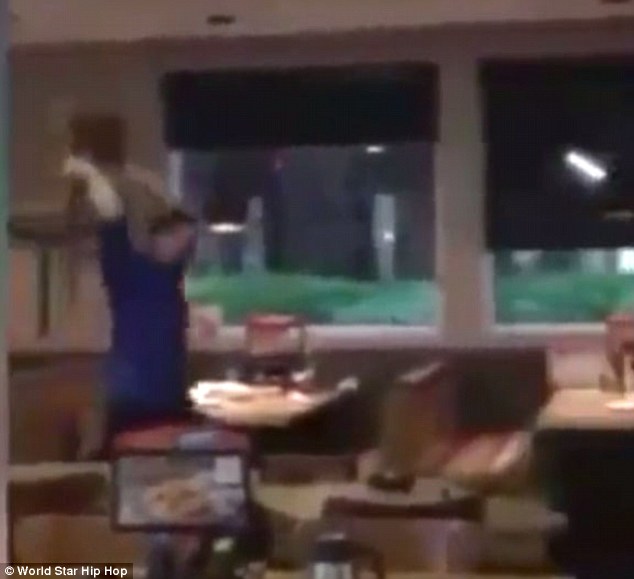 The video captured Al Hourani and the patrons throwing wooden chairs at each other. The unruly patrons also threw dishes at Al Hourani during the fight

After chairs are thrown in both directions, the unruly party walks towards the door again and Al Hourani, with what appears to be blood on his face, does a lap around the restaurant.

The video ends with the party of five leaving the restaurant, while the Al Hourani brandishes a long cook’s knife and what appears to be a plate at them.

Authorities said that Al Hourani was taken to the hospital in non-critical condition.

In a police report, obtained by The Smoking Gun, Al Hourani said that ‘one of the reasons why the suspects got so upset was because he kept calling them sirs even though the suspects were dressed like ladies.’

Authorities listed the party as being composed of men and women, between the ages of 20 and 25.

Police said no arrests had been made, but the incident is being classified as a felony aggravated assault.