Australian footy star Adam Elliot is under investigation by the NRL’s integrity unit after a naked video emerged online.

The video of the Bulldogs forward began circulating on Thursday leading team management to issue a statement on Thursday evening.

‘The Canterbury Bankstown Bulldogs would like to confirm that they are aware of a video having surfaced involving Adam Elliott,’ the club statement claimed.

‘The video relates to something that was filmed at a private gathering five years ago. The club has informed the NRL Integrity Unit of the matter.’

There is no suggestion of any illegal behaviour in the video.

Elliot is currently under contract negotiations with the Bulldogs and had reportedly hit a stalemate with the club.

He has established himself as one of the standout players for the team in recent games and is understood to have been courting interest from St George and the Canberra Raiders.

The Bulldogs had reportedly given him a ‘low-ball’ offer, leading to him hesitating to sign an extended contract, according to The Daily Telegraph.

Elliot was involved in a previous 2018 incident in which he was spotted dancing naked around teammates at the Harbour View Hotel in Sydney during ‘mad monday’ celebrations. 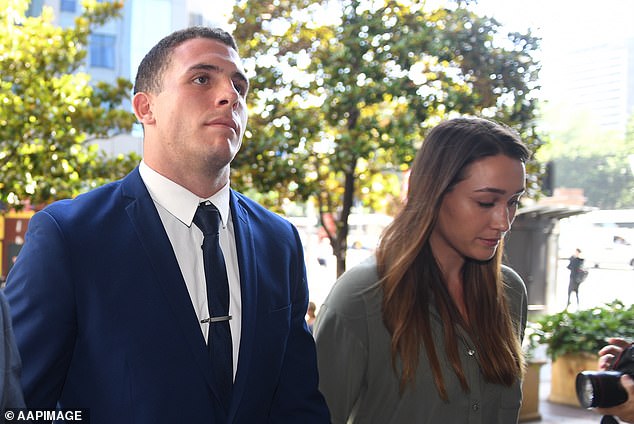 Adam Elliott (pictured), 24, was silent as he walked to Downing Centre Local Court with his girlfriend Robyn Wattam (pictured right) at a previous court appearance in 2019