Designer Christopher Bailey is set to quit Burberry after 17 years at the company.

Bailey, 46, who served as CEO from 2014 until July this year, will leave the British fashion house in March 2018, it was announced today.

Since becoming creative director in 2004, Bailey has contributed to total revenue growth of £2billion. He is also widely credited with helping to transform Burberry from a British brand into a global fashion powerhouse.

In a statement released today, Bailey said ‘the decision to leave was not an easy one’ and that he is ‘excited to pursue new creative projects’, but did not provide details.

Stepping down: Outgoing Burberry chief creative officer Christopher Bailey, pictured with Kate Beckinsale and Rosie Huntington-Whiteley at an event in 2013

Bailey joined Burberry in 2001 and was named creative director in 2004. He served as CEO for three years until July this year when he was succeeded by Marco Gobbetti. Since then he has taken up the role of president and chief creative officer.

While he will step down from the board on March 31 2018, Burberry said he would be staying on to help with the transition until December next year.

Burberry said it will launch a search for a successor to Bailey.

Questions are likely to be raised about the size of Mr Bailey’s final pay packet.

Shareholders earlier this summer dealt a blow to Burberry over executive pay, with nearly a third voting against generous payouts that include a £5.4 million share award for Mr Bailey. 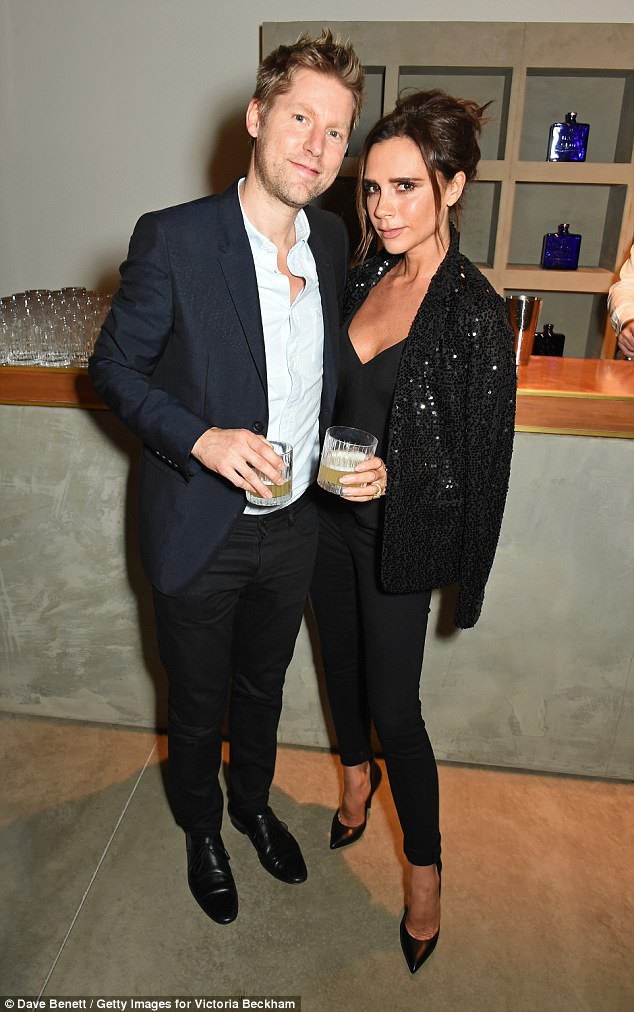 Glamorous: Bailey, who served as CEO for three years, with Victoria Beckham in 2015

In total, he received £3.53 million for the year to March 31, nearly double the £1.89 million he pocketed a year earlier.

Burberry said the full details of his pay would be disclosed in the company’s annual report, covering the year ending March 31 and the subsequent year ‘as appropriate’.

On his pending departure, Bailey said: ‘It has been the great privilege of my working life to be at Burberry, working alongside and learning from such an extraordinary group of people over the last 17 years.’

The former chief executive added that Burberry’s best days were still ahead.

‘The company will go from strength to strength with the strategy we have developed and the exceptional talent we have in place led by Marco,’ he said.

‘I am excited to pursue new creative projects but remain fully committed to the future success of this magnificent brand and to ensuring a smooth transition.’