A burglar who binged on vodka and cocaine before frenziedly stabbing a young couple asleep in bed has been jailed for 16 years.

Car salesman Connor Ashworth-Driver was said to be highly intoxicated when he broke into the home of Natalie Link and her then boyfriend, soldier Harvey Clarke, and launched his random, vicious attack.

A court heard the 22-year-old did not know his victims and was able to escape after injuring the pair in October last year.

But in a bizarre and tragic twist of fate, he was linked to the horrific crime after he mowed down and killed a pedestrian just over two months later.

A court heard police were able to match his DNA taken on his arrest for the hit-and-run in the early hours of New Year’s Day to a baseball cap he left behind at the scene of the stabbing.

Ashworth-Driver was almost twice the drink-drive limit and speeding when he struck and killed 53-year-old Martin Sawyer as he crossed a road in Chatham, Kent.

He had also consumed so much cocaine that he was more than four times the drug-driving limit.

He later admitted causing death by dangerous driving and failing to stop after an accident, as well as aggravated burglary and two offences of wounding with intent to cause grievous bodily harm.

Jailing him today for a total of 16 years, Judge Adele Williams said the knife attacks on Miss Link and Mr Clarke had left both physical and mental scars, while the loss to Mr Sawyer’s family was ‘immeasurable’.

‘Being attacked in their own home in that way is the stuff of nightmares and is a very grave offence indeed,’ said the judge.

‘They have asked themselves why them, why did you do it, but you have no answers.’ 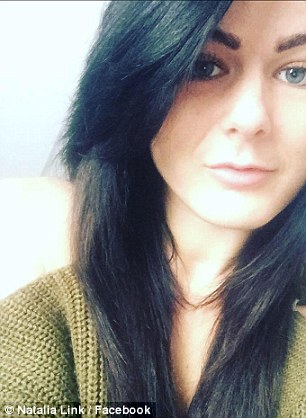 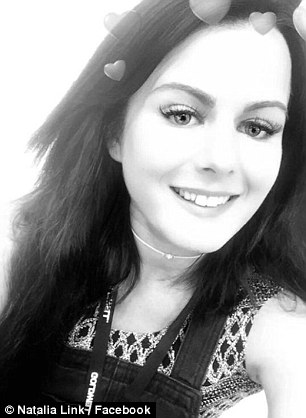 Judge Williams added: ‘I conclude you were living a highly irresponsible life. Despite holding down a job and being a loving family member, you were using alcohol and cocaine to excess. On occasion you were in the grip of those substances.

‘On those two occasions you have behaved in such a highly irresponsible fashion that you have caused the loss of one life and have irreparably damaged the lives of many others.

‘I conclude you are a highly dangerous young man.’

Maidstone Crown Court in Kent heard Ashworth-Driver, who was also banned from driving for 18 years, had no explanation for his crimes, other than being under the influence of drink and drugs.

He has no previous convictions.

Prosecutor Shanda McAteer said Miss Link, 23, and Mr Clarke were asleep in bed at their home in Gardiner Street, Gillingham, Kent, when Ashworth-Driver broke into the property at about 4.30am on October 22.

Mr Clarke, an engineer in the army, woke on feeling something sharp and was stabbed about 10 times in the head and body.

He managed to flee from the bedroom and out into the street, only to be chased by Ashworth*-*Driver shouting: ‘I am going to f***ing kill you.’

Miss McAteer said Mr Clarke hid while Ashworth*-*Driver then returned to the property where he set about Miss Link.

She was still in the bedroom, not knowing what had happened to her boyfriend.

But the court heard the hairdresser bravely fought back by kicking out at Ashworth-Driver and knocking the blade out of his hand.

Prosecutor Shanda McAteer said Miss Link (pictured) 23, and Mr Clarke were asleep in bed at their home in Gardiner Street, Gillingham, Kent, when Ashworth-Driver broke into the property at about 4.30am on October 22

He ran off leaving behind the knives and the baseball cap.

It was not until Ashworth-Driver, then also living in Gillingham, was arrested for causing the death of Mr Sawyer that officers made a DNA match.

When interviewed, he said he was not aware he hsd been involved in a knife attack and claimed to have blacked out from drink and drugs.

He told police he started drinking after finishing work before taking two lines of cocaine downing a bottle of vodka.

‘He confirmed he doesn’t know the victims or their address,’ said Miss McAteer.

Both Miss Link and Mr Clarke were permanently scarred and traumatised from the attack. The court heard they have since split up but remain friends. Miss Link, who was in court, suffered wounds to her scalp and thigh, and subsequently lost her job.

In her victim impact statement she detailed how she could not face sleeping in her home for about six weeks after the attack, and now effectively ‘barricades’ her bedroom door at night.

The court heard Mr Sawyer, a father of three sons, was killed as he headed home from a night out celebrating New Year’s Eve.

He was walking along Luton Road when he was hit by Ashworth-Driver’s speeding Renault Clio at about 1am.

He was thrown into the air on impact and onto a parked vehicle. Ashworth-Driver, who was driving, at 56mph in a 30mph limit, did not stop.

On arriving home, he told his girlfriend he thought he had hit and killed somebody but she simply gave him a glass of wine, the court was told.

Ashworth-Driver later telephoned the police and when breathalysed, was found to have 63 micrograms of alcohol in 100 millilitres of breath. The legal limit is 35.

The cocaine level in his blood was said to be 46, with a legal limit of 10. Tom Dunn, defending, said Ashworth-Driver, was ‘profoundly shocked’ by the gravity of his behaviour, and offered his ‘heartfelt apologies and condolences.’

Describing Ashworth-Driver, who wrote a letter to the court and his victims, as hard-working and mild-mannered, Mr Dunn added: ‘His behaviour is quite simply inexplicable.

‘The person who perpetrated the monstrous things on Miss Link and Mr Clarke, and who caused tragedy for the Sawyer family, was a person who was different when not under drink and drugs.

‘I accept that may be precious little comfort for them. He is seeking to deal with it in custody. It is a very dark day for everybody in this case.’

Judge Williams said Miss Link’s victim statement detailed the deeply traumatic and life-changing effect the attack had had on the couple.

She added Ashworth-Driver had ‘callously’ driven off after hitting Mr Sawyer, and the family’s grief was ‘raw and apparent’.

‘They mourn the milestones in their lives which he will miss and be missed by them.

‘Nothing that I can say nor sentence I can pass is in any way intended to put a value on his life. It cannot possibly do so. His loss is immeasurable to his family and friends.’

Ashworth-Driver was jailed for eight years for each of the offences involving Miss Link and Mr Clarke, and eight years consecutive for causing the death of Mr Sawyer.

He must take an extended driving test before regaining his licence.