A highway officer has been shot dead and two officers left injured following a ‘long and horrific gun battle’ near a freeway in California on Monday.

California Highway Patrol (CHP) officer Andre Moye, 33, who had worked as an officer for around four years, was killed in a hail of gunfire after a man whose pickup truck was being impounded grabbed a rifle and opened fire.

According to the Riverside Police Department, the shooter opened fire shortly after the CHP officer pulled over his white GMC pickup truck off the 215 freeway in Riverside shortly after 5.30pm.

The officer called for a tow truck in the area of Box Springs Boulevard and Eastridge Avenue and was filling out paperwork when the shooter behind the wheel suddenly pulled a rifle from the truck and began shooting. 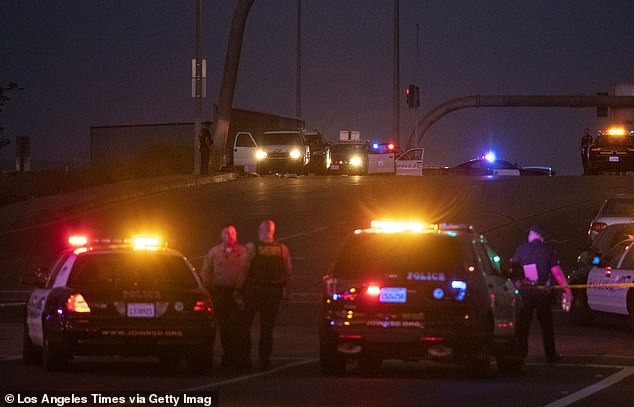 The officer, who had worked an an officer for around four years, was shot dead after a driver opened fire on a freeway in Riverside (pictured) shortly after 5.30pm

Officer Andre Moye called for help and three other CHP officers, a Riverside police officer and three Riverside County sheriff’s deputies also arrived and traded shots with the man before killing him at the scene.

The gunman, who was reportedly seen clad in black and wielding a military assault-style rifle, traded fire with officers before crouching behind the front of his truck for cover, still trading shots. 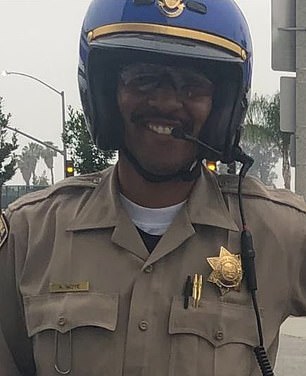 The highway officer killed in the shooting has been identified as California Highway Patrol (CHP) officer Andre Moye, 33 (pictured)

On Monday night Riverside Police Chief Sergio Diaz said: ‘It was a long and horrific gun battle’ before adding: ‘We don’t know his motive for this crime.’

Scott Parker, assistant chief at the CHP’s Inland Division, said: ‘He called for a tow truck and was filling out the necessary paperwork when the driver pulled a rifle from the truck and opened fire.

‘The officer called for help and three other CHP officers arrived, who immediately faced gunfire and two were hit.’

Following the shooting, images showed bullet holes in the front windows of two patrol cars and large holes blown in their back windows.

Officer Parker said the the other two officers had been left wounded, with one in critical condition and the third suffering only minor injuries.

Authorities did not immediately release the names of the killed CHP officer or the gunman however family members later identified the officer as Andre Moye, Jr, KABC-TV reported. 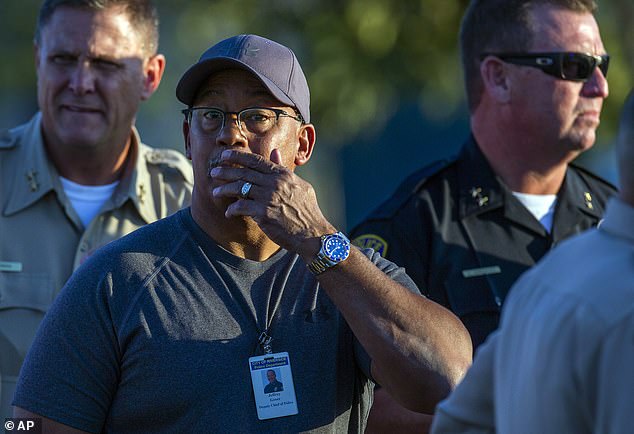 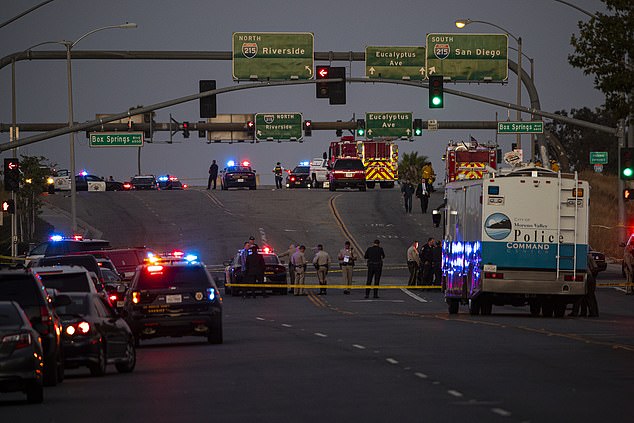 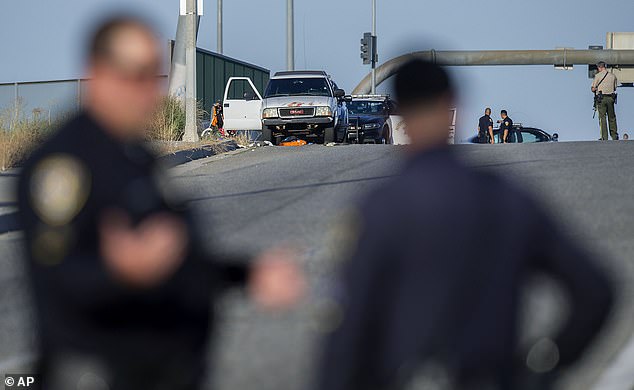 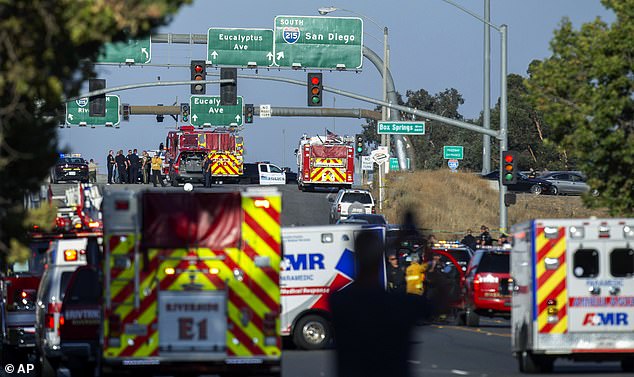 CHP Commissioner Warren Stanley confirmed the identity of the officer and said ‘tonight, I mourn the loss of one of our own’.

Taking to Twitter on Tuesday Mr Stanley wrote: ‘I am devastated by the tragedy that unfolded earlier in Riverside. Tonight, I mourn the loss of one of our own, CHP Officer Andre Moye, who was killed during a shootout following a traffic stop.

‘Prayers go out to all, including the responding officers injured in the shooting.’

California Governor Gavin Newsom tweeted: ‘Our hearts ache over the tragic loss of @CHP_HQ ‘s own Officer Andre Moye — who will be remembered for his commitment to service and the community of Riverside County.

‘Jen and I extend our deepest condolences to his family, friends, and fellow officers who are grieving tonight.’ 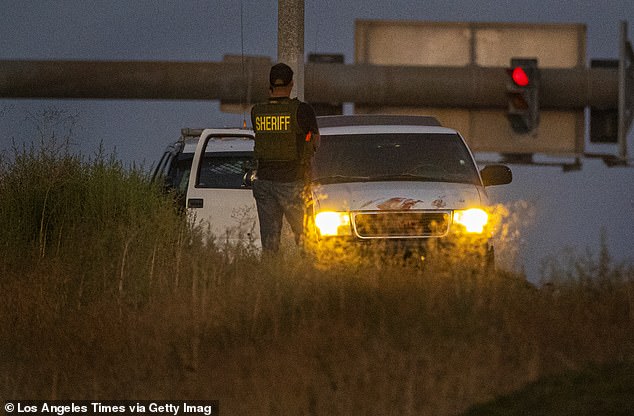 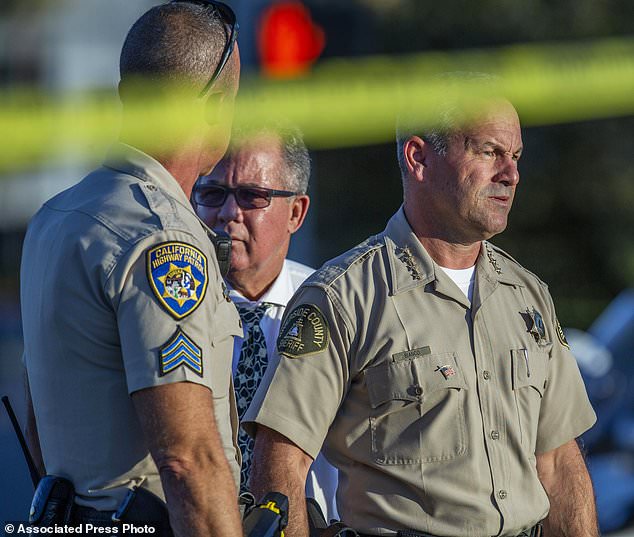 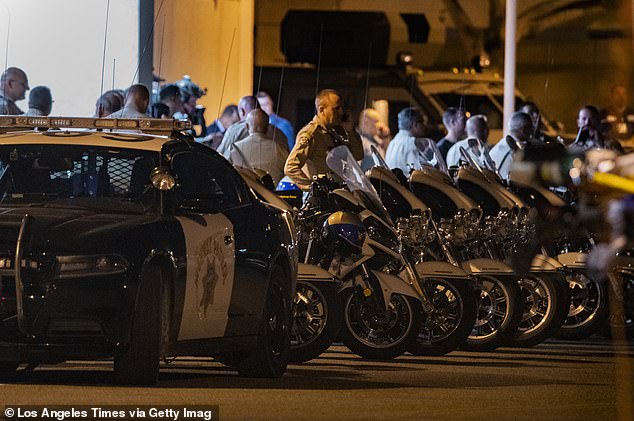 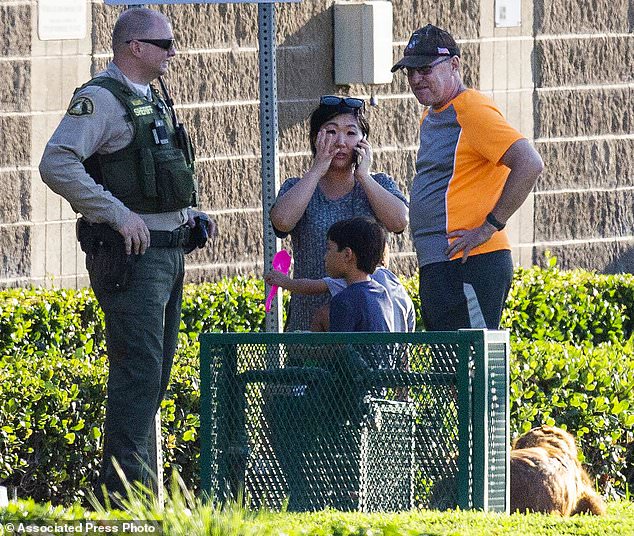 Police earlier had said at least one civilian had been slightly injured by flying glass during the attack.

Jennifer Moctezuma, 31, of Moreno Valley told the Los Angeles Times that she was driving home with her 6-year-old twins when a bullet flew through her front windshield.

Charles Childress, 56, a retired Marine from Moreno Valley, was in the car behind her.

He led the family as they crawled to the bottom of a bridge to hide and none were harmed, the Times reported. 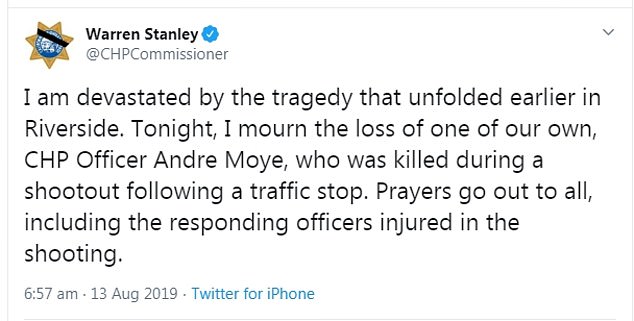 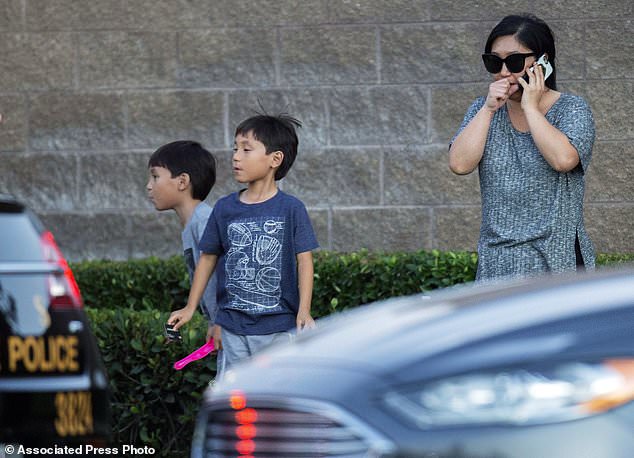 After the shooting, dozens of law enforcement officers gathered outside of the hospital in nearby Moreno Valley. Snipers were posted on the roof as a precaution.

Dozens lined up and saluted as the officer’s flag-draped body was removed from the hospital and placed in a hearse. Motorcycle officers then led a procession as the hearse was driven to the county coroner’s office.