Caerphilly man lives after flung into air and set on fire

One of the stars of hit TV show Don’t Tell The Bridge barely survived a near-death experience after he was engulfed in flames and blown 20 feet through the air in a freak gardening accident.

Doctors said Ben Longville was lucky to be alive after suffering severe facial and body burns after he tried to set fire to a pile of logs which had four litres of petrol poured onto them.

The 35-year-old was saved by his father-in-law David Owens, 60, who also appeared on the show, when he was rugby-tackled onto the main road while still on fire.

The father-of-one is now being nursed back to health by his wife Sarah, 31.

Speaking about his horrific ordeal, Mr Longville said: ‘It was a stupid thing.

Ben Longville, 35, appeared on the hit TV show Don’t Tell The Bride to tie the knot with his wife Sarah in 2012

‘I was cutting down hedges for my father-in-law and piled them up and put around four litres of petrol on it.

‘Fumes filled the air pockets between the bushes and sticks and when I bent down to light it I just heard a bang and closed my eyes.

‘My father-in-law said I was blown back around 20ft through the air and up the garden.’

Mr Longville hailed his father-in-law for saving his life. He said: ‘I hit the ground and it knocked the wind out of me. I opened my eyes and the first thing I saw was that my face and arms were on fire.

‘One of the doctors asked how far it was to the main road and I said about 20 metres.

‘He told me that if my father-in-law hadn’t stopped me I wouldn’t have made it and probably would have died of shock or a heart attack. 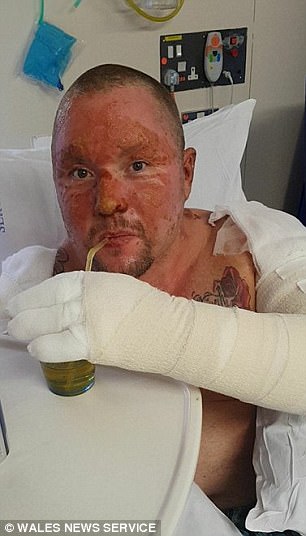 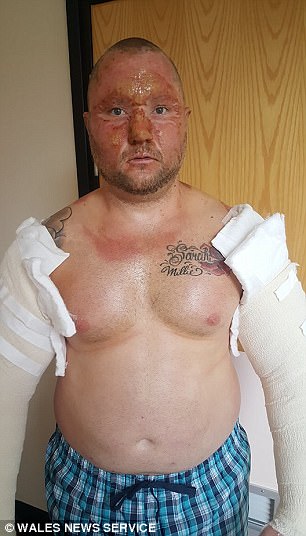 ‘He saved my life. If he wasn’t there to do that I would’ve died.’

Ben was airlifted to Morriston Hospital where he is now being treated for his injuries.

Doctors treating Mr Longville at the Swansea hospital said he has suffered 10 per cent severe burns and 20 per cent of minor burns to his face, neck, torso arms and hands.

Mr Longville, who works as a contract security supervisor, is not entitled to sick pay, while his wife Sarah is a teaching support worker who works through an agency.

The pair wedded in Caerphilly Castle, South Wales, in 2012 after growing up just five miles apart. 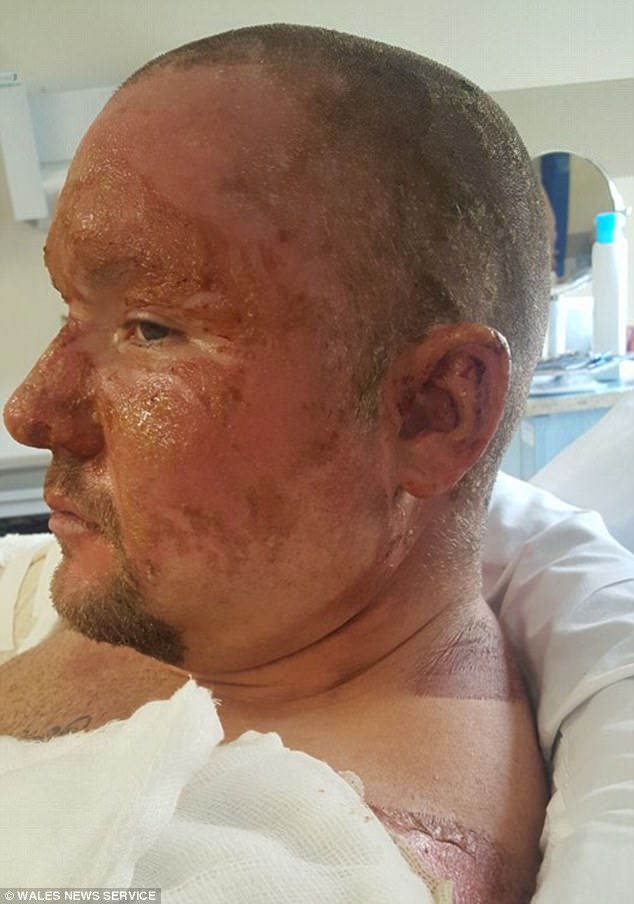 Doctors treating Mr Longville at the Swansea hospital said he has suffered 10 per cent severe burns and 20 per cent of minor burns to his face, neck, torso arms and hands 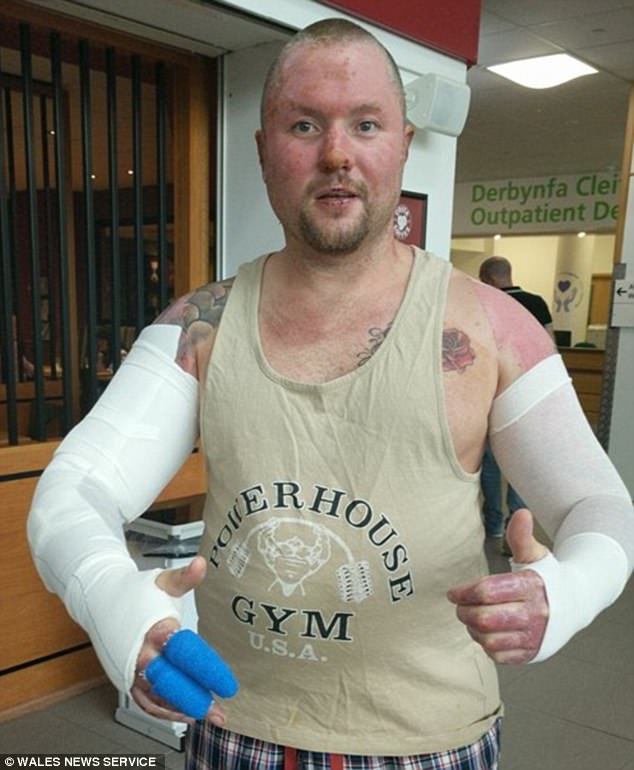 Mr Longville was told he was lucky to be alive after the accident two weeks ago. His family have now launched an appeal for help

In their Don’t Tell The Bride episode, Mr Longville had deal with his mother, who still treated him like a child, while his wife-to-be gave him weekly pocket money.

His wife has now given up work temporarily to nurse Mr Longville back to health.

Mrs Longville said: ‘We have been all over the place since it happened. I have had to drive up and back everyday.

‘Our four-year-old daughter, Millie, has been to see him and she is taking it in her stride – she’s been great.’

The family have launched an appeal for help after the accident two weeks ago.