California man, 40, becomes the seventh person to die from a vaping-related illness in America

A Californian man has become the seventh person to die from a vaping-related illness in the US and the second in the state.

The 40-year-old, who had been sick for several weeks, died over the weekend after he suffered a ‘severe pulmonary injury associated with vaping’.

The states of Kansas, Indiana, Minnesota, Illinois and Oregon have also reported one death each from vaping.

A 40-year-old man has died in California after suffering a ‘severe pulmonary injury associated with vaping,’ becoming the seventh person to die from a vaping-related illness in the US (file picture)

Tulare County public health officer Karen Haught warned residents that the long-term effects of vaping are not known in a press release today.

She said: ‘Any use of ecigarettes poses a possible risk to the health of the lungs and can potentially cause severe lung injury that may even lead to death.’

Yesterday the CDC said it had identified 380 cases of lung illness associated with the use of e-cigarettes in 36 states and the US Virgin Islands.

The other vaping-related death in California was announced on September 7 with authorities saying the man was over 55-years-old and had chronic underlying health conditions.

The first death thought to be connected to vaping in the US was in Illinois in August, and the patient was said to have suffered a ‘severe respiratory illness’. 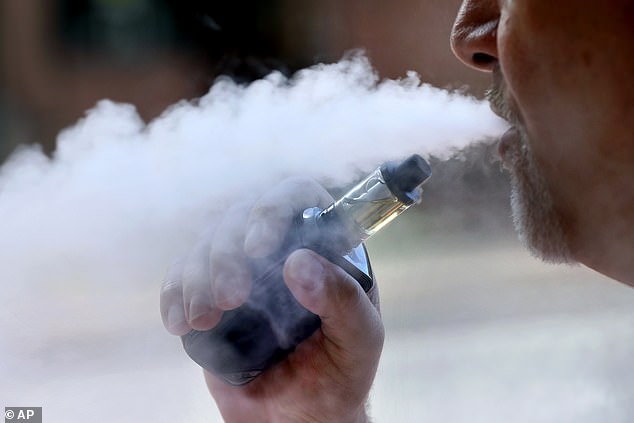 One man has died from a severe respiratory illness after using a marijuana e-cigarette, according to Dr Ann Thomas from the Oregon Health Authority (file picture) 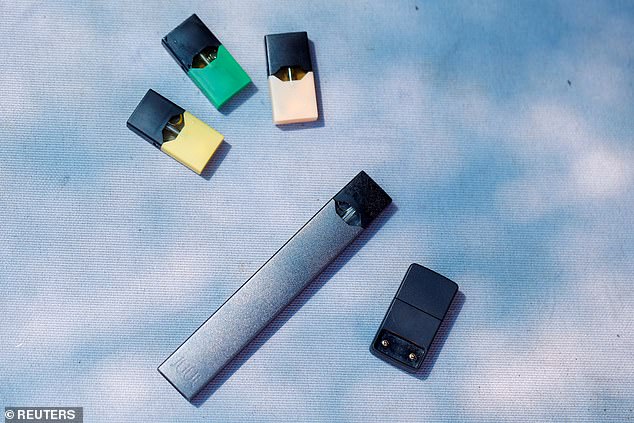 Juul, the e-cigarette maker, has been blamed for the rise in vaping among youth who are attracted to the flavored products, according to critics (file picture)

He said it’s the latest step to take vaping products out of the hands of young people, who are most at risk of getting addicted, saying ‘vaping is dangerous.’

Last week President Trump vowed to ban all flavored e-cigarettes, but on Friday he appeared to soften his position saying the government should target counterfeit devices.

‘While I like the Vaping alternative to Cigarettes, we need to make sure this alternative is SAFE for ALL!’ the President tweeted on Friday.

‘Let’s get counterfeits off the market, and keep young children from Vaping!’

Trump’s first public comments on vaping come as health authorities investigate hundreds of breathing illnesses reported in people who have used e-cigarettes and other vaping devices.

No single device, ingredient or additive has been identified, though many cases involve marijuana vaping. 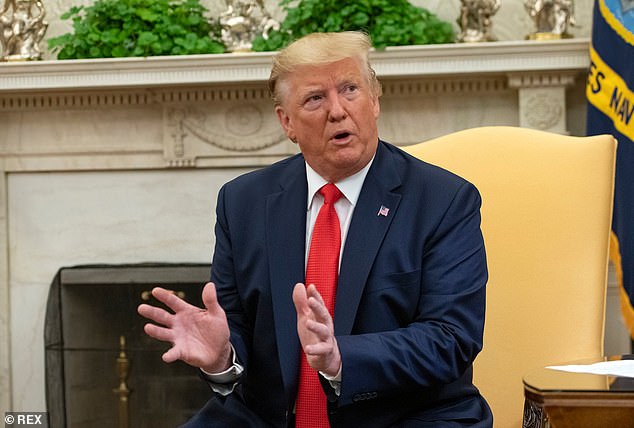 President Trump appeared to backtrack on Friday from a pledge earlier this week to ban all vaping products, instead saying the government should focus on counterfeits

‘While I like the Vaping alternative to Cigarettes, we need to make sure this alternative is SAFE for ALL!’ the President tweeted on Friday. ‘Let’s get counterfeits off the market, and keep young children from Vaping!’

The restrictions announced by Trump officials would only apply to nicotine vaping products, which are regulated by the FDA.

The FDA has had the authority to ban vaping flavors since 2016, but has previously resisted calls to take that step.

Agency officials instead said they were studying if flavors could help smokers quit traditional cigarettes.

But parents, teachers and health advocates have increasingly called for a crackdown on flavors, arguing that they are overwhelmingly to blame for the explosion in underage vaping by U.S. teens, particularly with small, discrete devices such as Juul’s.

‘It has taken far too long to stop Juul and other e-cigarettes companies from targeting our nation’s kids with sweet-flavored, nicotine-loaded products,’ said Matthew Myers, of the Campaign for Tobacco-Free Kids, in a statement.

Federal law prohibits e-cigarette and all other tobacco sales to those under 18.

But federal health officials said Wednesday that preliminary data shows more than 1 in 4 high school students reported vaping this year, compared with 1 in 5 students in 2018.

Federal health officials have called the trend an ‘epidemic,’ and they fear teenagers who vape will eventually start smoking.