On track to become one of the strictest pro-vaccination law in the US, a bill to give health officials the authority to decide whether children can be exempted from shots will be passed or killed by state lawmakers on Friday.

Fueled by the support of celebrities like Jessica Biel and Robert F Kennedy Jr, anti-vaccination sentiments run high in California.

But after a massive measles outbreak hit Disneyland in 2014 the state outlawed shot exemptions for philosophical reasons, making it harder for parents to opt their children out of vaccination.

The new bill aims further defang the anti-vaxxer movement by taking the power to determine exemptions away from doctors, some of whom are against vaccination themselves and have been accused of writing bogus notes for children.

It’s sparked controversy – even violence – including an incident last week in which an anti-vaxxer activist pushed the new bill’s sponsor, state Senator Dr Richard Park in a viral video the activist himself took.

Dr Richard Pan (pictured) co-authored SB276, a proposed California law that would require all medical vaccine exemptions to be approved by state health officials. It goes to a vote Friday

Dr Pan has led the charge to pass two other piece of legislation in California to make sure vaccination rates remain high.

Between 2018 and 2019, the proportion of California kindergartners who were vaccinated dropped from 95.1 percent to 94.8 percent.

That puts the state in danger of losing herd immunity, which protects those who truly are too young, old or sick to be vaccinated.

Since the state outlawed philosophical vaccine exemptions in 2015, anti-vaxxer parents have sought out doctors willing to write bogus ‘medical’ exemptions.

A handful of doctors, including Dr Kelly Sutton, Dr Michael Fielding Allen and Dr Bob Sears are suspected of being responsible for many of the inappropriate notes citing vague family histories and allergies as their justifications to excuse kids from shots.

There are no federal laws requiring vaccination, and doing so could be a conflict with religious freedom established by the First Amendment.

But schools and other institutions do have requirements that students must prove they’ve had certain immunizations, unless they have been exempted.

Currently, those exemptions can be given by a doctor, and the buck stops there. 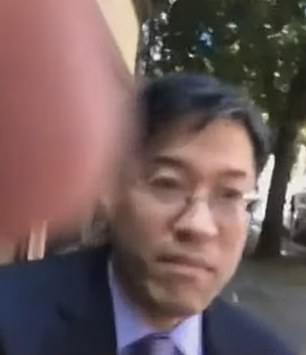 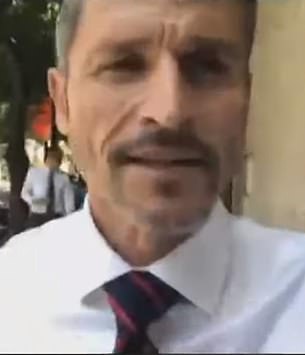 The proposed bill, SB276, will require these exemption to be be approved by the California Immunization Registry (CAIR).

If the law passes, schools will only be allowed to accept CAIR-approved exemptions, effective January 1.

SB276’s march toward law has been fraught.

In June, it was green-lighted by the state Senate despite hours of vehement testimonies from anti-vaccine parents.

‘Mr Bennett is not a lone actor, but a person who accepted the violent rhetoric of the anti-vax movement and has acted upon it by assaulting me on a public street,’ Dr Pan said in a statement.

It wasn’t the first time Dr Pan faced aggression over the bill.

He also said protesters had marched with posters or wearing shirts bearing his face, ‘splattered with blood.’

Still, as US cases of measles have surged to over 2,000 this year – the highest since 1992 – the proposed vaccine bill has moved ahead.

If it receives support from the majority of the full California legislature in Friday’s vote, California governor Gavin Newsom has said he will sign it into law.