‘I am never going to look the same again,’ the 38-year-old blonde from Norway recalled what was going through her mind that night in June of 2016, when she says  married father Sanjay Tripathy pummeled her in his room at the four-star W New York hotel in Midtown.

‘I am probably going to die here tonight, how am I ever going to get out of here alive,’ the woman, who is not being identified due to the nature of the charges, said through tears, according to the New York Post.

‘As he’s punching me, he keeps repeating he’s going to kill me,’ she recalled of the alleged encounter with the tech executive.

Tech executive Sanjay Tripathy seen in court Monday, where his call girl accuser took the stand against him. She sobbed while she recalled the beating he allegedly gave her in their encounter at a W Hotel in 2016 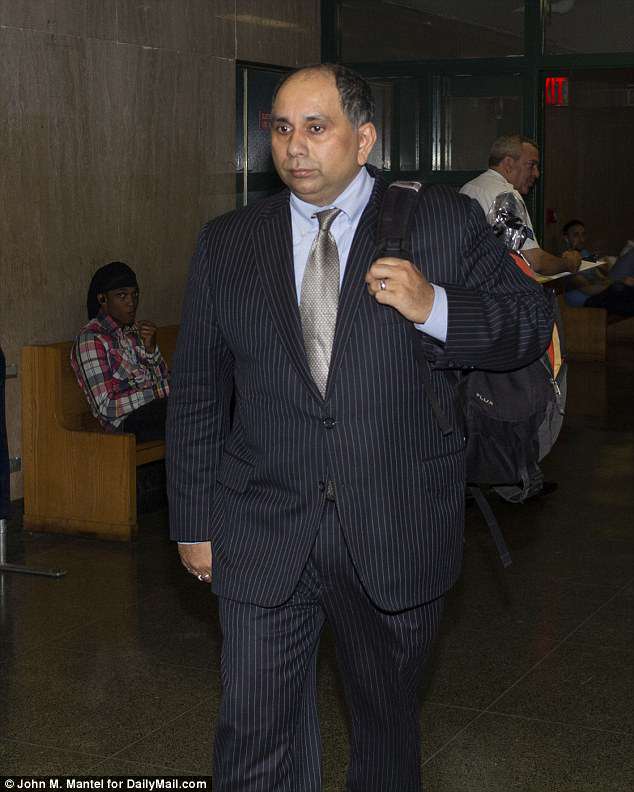 Tripathy, seen in court Monday, is facing charges of sexual abuse, assault and strangulation, among other charges 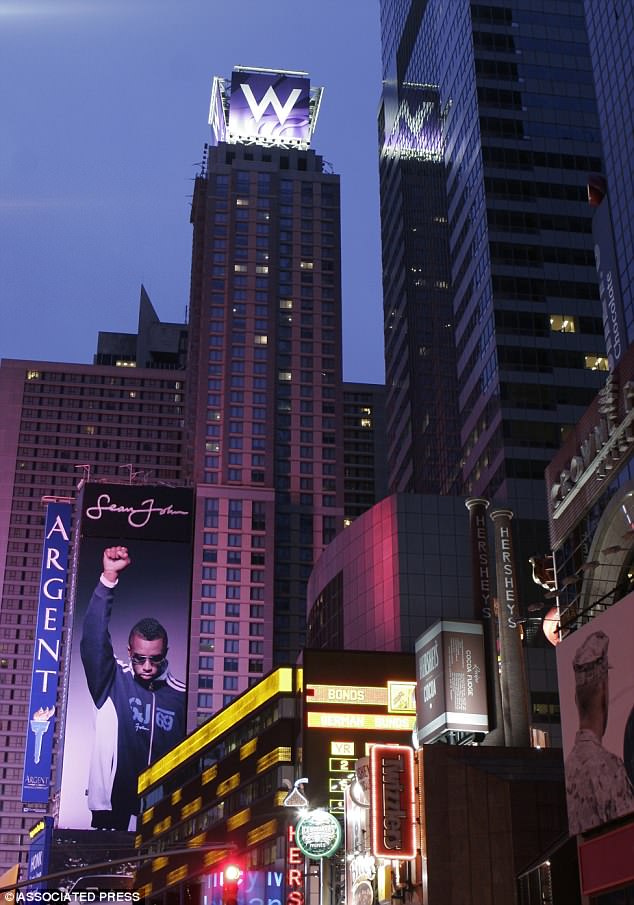 The W Hotel is shown in New York’s Times Square, where the businessman and makeup saleswoman had their sex meeting. Surveillance video was shown to the jury of the woman leaving the hotel and making a beeline for an NYPD van just outside

She says the ‘date’ took a frightening turn the moment they walked into his hotel room, with Tripathy, who had met the woman on the site SeekingArrangements.com, shoving her down onto the bed, pulling down her tights and inserting his fingers inside her.

When she resisted, Tripathy became irate and more violent. She claims he started choking her and threatened to anally rape her.

She told him she needed to use the restroom, thinking she could make a run for it, but instead, he walked her to the bathroom and watched her urinate.

Still, when he turned his head, she tried to escape running towards the door, but he had the latch on.

‘I try to open the front door, but the [latch] was on,’ she said, crying on the stand. ‘And I scream ”help me, help me!” as loud as I can, through the crack in the door.’

She claims he then lunged at her and covered her mouth and dragged her back to bed. She again tried to get help by taking the phone off the receiver to call the front desk, but again her attempts were thwarted and he hung up the phone.

She claims Tripathy continued to beat her, and she saw her own blood flying and staining the white sheets as his fist recoiled for another blow.

He then ordered her to perform oral on him till he orgasmed and if she did’t he would ‘f*** her in the a***.’

He threatened her after the encounter was over that he would kill her if she went to police.

In surveillance video shown in court Monday, jurors watched as the woman leaving the hotel and going directly to an NYPD van parked across the street. 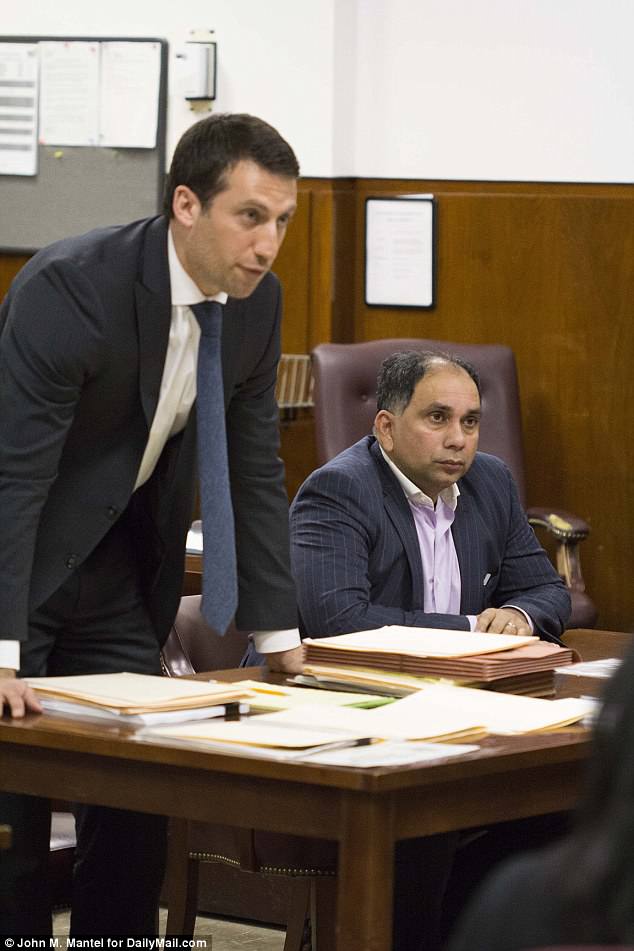 The frightened woman apparently attempted to depart the room after the date went from fun to frightening – and Tripathy allegedly became more violent.

‘He locked her in the hotel room and forced her to perform oral sex,’ Assistant District Attorney Ryan Lipes previously said in a court statement about the incidents.

‘He threatened to kill her… he choked her, causing her to have difficulty breathing.’

When the woman rejected his advances, the executive allegedly beat her, resulting in her split lip, broken tooth, two black eyes and a bloody nose. 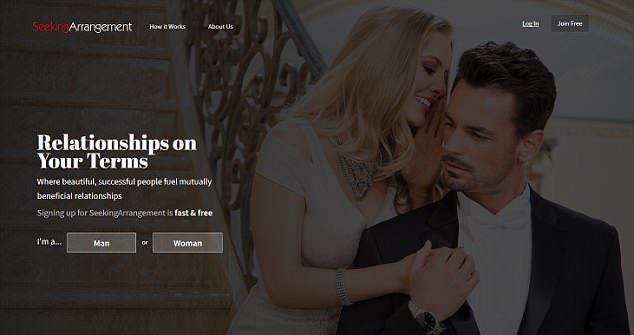 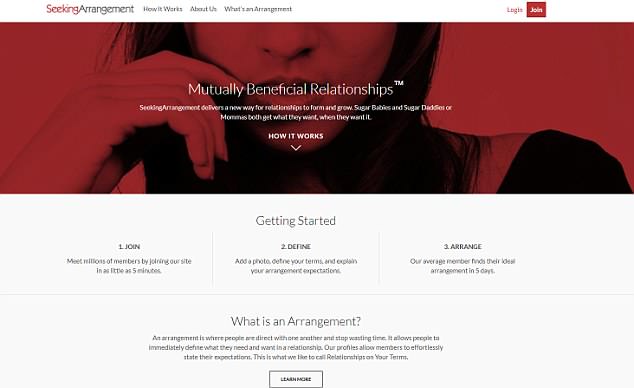 Tripathy linked up with his unnamed paramour on SeekingArrangement.com before the pair met in person on June 15, 2016

‘She saw blood literally fly out of her face after being punched,’ Baraiola said on Thursday.

‘When the issue of money came up midway through their consensual sex session, Tripathy declined to pay,’ Tripathy’s former attorney Jeffrey Greco said.

‘She was demanding an exorbitant fee.’

He said of Tripathy: ‘He’s a married guy… when he travels, when he’s in New York, he likes to indulge.’

Photographs shown in court on Friday of the woman’s battered body, which appeared to show that the incidents were more serious than just rough sex play.

A judge in the case said the photos ‘indicate something entirely unconsensual, to say the least.’

Tripathy has been charged with sexual abuse, assault and strangulation, among other charges.

The woman, who currently resides in New York, has denied claims that she is a sugar baby or a prostitute – despite her membership on the website.

The alleged victim is employed as a salesperson for an internet-based cosmetics firm.