Is this the mysterious ‘Fen Tiger’…? Cambridge University worker pictures big wildcat ‘the size of a Labrador’ roaming around his garden

A huge wildcat ‘the size of a Labrador’ with ‘big claws’ has been pictured roaming around a back garden in Cambridge.

The mysterious cat was seen by a Cambridge University worker who was watching from his kitchen window and took a photograph.

The man, who asked not to be named, said it wasn’t the first time the unusual animal has visited his garden – this time he was able to capture it on camera.

A Cambridge University worker, who wished to remain anonymous, spotted the ‘big cat’ from his kitchen window in central Cambridge on Saturday morning (pictured)

He said: ‘It was around 8 or 8.30am when I saw the animal from my kitchen window,’ he said. ‘I think it somehow keeps coming to this place to hunt rabbits or other small animals.’

He said he initially thought the animal was a certain species of wildcat – the Felis Silvestris – but at closer inspection of the photo it was far too large.

‘Initially I thought it was a wildcat like a Felis Silvestris, but then I went to my colleagues at the university, and they said it can’t have been as this animal was way bigger,’ he said. 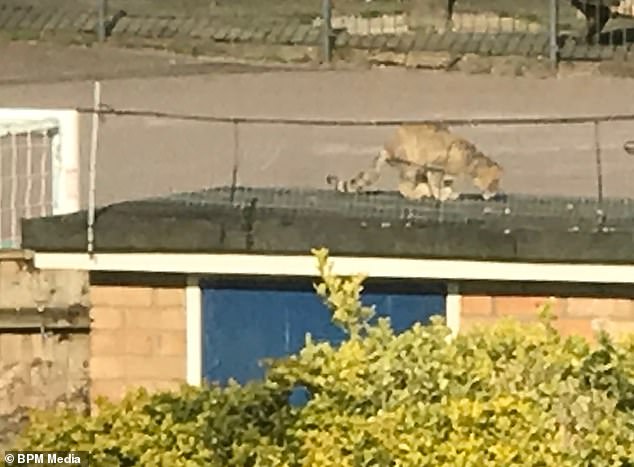 ‘Looking at the tail it’s definitely a different species. It is a wild cat but not that species I don’t think.

‘The animal was a brown and black colour with a very long tail that had lots of black circles on it. The tail was so long, and its legs were thick as well with big claws.

‘It was about the size of a fully grown Labrador dog.’

For many years there have been rumours around Cambridgeshire about sightings of a mysterious big cat in the area.

For 30 years residents in the county have reported seeing  seeing a large wildcat that they have nicknamed ‘The Fen Tiger’. 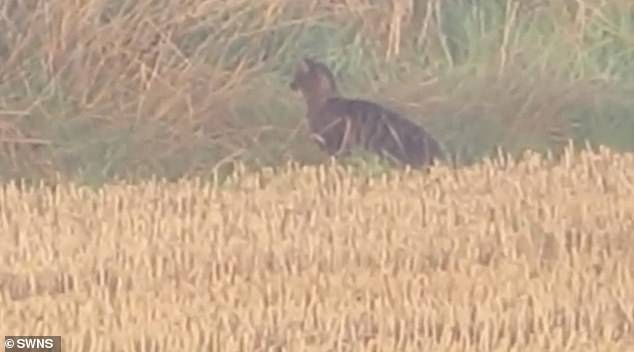 A giant cat believed to be the ‘Fen Tiger’ was also spotted by a couple in Ipswich, who photographed the animal as it prowled 400 yards away from their Airbnb (pictured)

THE HISTORY OF THE ‘FEN TIGER’

The ‘Fen Tiger’ – which is most likely a wildcat and not a tiger – was first spotted in Cottenham in 1982.

The first Fin Tiger was seen 30-years-ago and each sighting of a big cat since then has reminded people of this first sighting.

As such a cat would not live past 30-years, it’s clear that recent sightings of wild cats mean that it’s likely there is more than one roaming the streets.

Others claimed to have spotted large cats in Cambridgeshire and beyond for years, but the first video evidence of the animal wasn’t recorded until 1994.

William Rooker captured on film what he believed to be a large cat in a field near the Oakington Road in Cottenham.

The British Big Cat Society told the BBC Mr Rooker had captured ‘what is almost certainly a large cat-like animal’ on film.

There were later numerous reports of big cat  sightings across East Anglia, alongside Holbeach in South Lincolnshire and Wisbeach in North Cambridgeshire.

Other sightings of the ‘Fen Tiger’ were reported near March and Littleport in 2008, and large cat-like prints were found in Chatteris later that year.

The most recent sightings include a couple who spotted a ‘large cat’ in a field in Ipswich last September and a sighting in St Neots last December.

The man said he had ‘heard about the mystery of the Fen Tiger’ but wasn’t sure if this animal could be it.

The legend of the Fen Tiger has been around for 30-years. As big cats such as this cannot live to such an age, the cat spotted in Cambridge will not have been the infamous Fen Tiger.

‘This was a wild cat like people have said the Fen Tiger is and this one is the size of a Labrador dog,’ he said.

The sighting raised suspicion the animal may be the elusive ‘Fen Tiger’ – a local legend which has allegedly been spotted across Cambridgeshire for 30 years.

The most recent suspected sighting of the animal happened behind Abbotsley golf club in St Neots on December 18 last year.

After the man saw the big cat on Saturday he tried to contact the wildlife trust – but because of the coronavirus lockdown there was no immediate answer.

‘I rang the number but because of the pandemic everything has to be done through email so I have sent one and I’m waiting for a reply’, he said.

A giant cat believed to be the ‘Fen Tiger’ was also spotted by a couple in Ipswich, who photographed the animal as it prowled 400 yards away from their Airbnb.

After the sighting in September, Jamie Newby, 46, from Wisbech, told CambridgeshireLive he initially believed it was a Muntjac deer before his fiancée Hayley insisted it looked like a big cat.

‘The size of it instantly struck me. I’d seen a dog walker walking a Labrador in the same exact spot the day before and the cat looked bigger than that,’ he said.

‘The neck, the muscle mass. I’ve read a little more about them and they do hunt early between 6-7am and they like staying on the perimeter of fields.’

He added that, after some research, he concluded the animal must have been a Scottish Wildcat.

‘My fiancée said it had a scary, evil face. She’s never liked cats!’ he said.