Cancer-stricken mother, 40, claims the NHS is ‘leaving her to die’

A mother has been forced to raise £90,000 for a life-extending drug after claiming the NHS is leaving her to die.

Emma Shaw, 40, from Rothley, Leicestershire, was diagnosed with secondary breast cancer in August – just nine months after being given the ‘all clear’ from the disease.

The tumours have since invaded her liver, with doctors giving her just a year to live.

Due to her type of cancer – triple negative breast cancer – and her terminal diagnosis, Ms Shaw claims the NHS will only provide palliative chemotherapy rather than life-prolonging treatment.

But the mother-of-one is refusing to give up and is determined to show her eight-year-old son Theo that his ‘mummy tried her best to see him grow up’.

After researching her options online, Ms Shaw is fundraising £90,000 in the hope of receiving a drug in the US that is not routinely available on the NHS.

Emma Shaw has been forced to raise £90,000 for a life-extending drug after claiming the NHS is leaving her to die. She is pictured with her son Theo, eight, before being diagnosed with breast cancer last March. It then spread to her liver and she has been given just a year to live 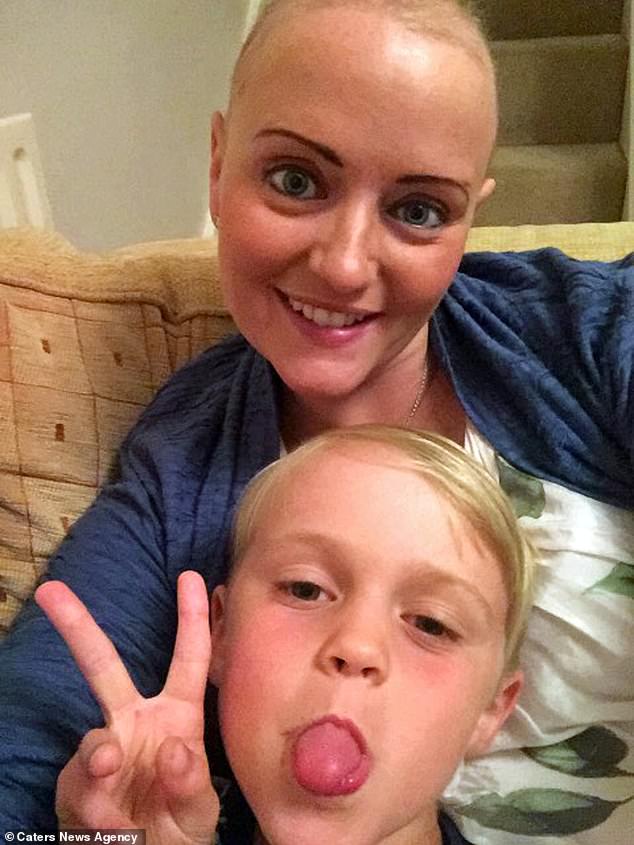 Pictured after undergoing chemotherapy, Ms Shaw claims the NHS has told her there is nothing they can do to treat her triple negative breast cancer given the fact it is terminal. But she is determined not to give up and wants to show Theo she fought hard to see him grow up Pictured with her boyfriend Darren, Ms Shaw accepts her cancer cannot be cured but wants to be around for as long as possible. She is fundraising to get the drug Keytruda in the US, which is not routinely available on the NHS. It stops cancer cells from hiding from the immune system

Other patients battling different types of cancer have previously raised money to access the drug, called pembrolizumab, privately in the UK.

Speaking of her diagnosis, Ms Shaw said: ‘Being told your only option is to die is awful, I am still having chemotherapy with the NHS but no one is sure if this will shrink the cancer or keep me stable.

‘The NHS staff at Leicester Royal Infirmary were amazing the first time I was diagnosed last March but the second time around you feel like you’re just forgotten and there’s no hope for the future.

‘I’m too young to just accept that I have just months left to live so I’m clinging onto hope.’

Ms Shaw is raising money towards paying for the drug Keytruda (pembrolizumab), which prevents cancer cells from hiding from the immune system so it can attack them.

In June this year, NHS England announced it would be making the drug more routinely available – but only for lung cancer that has spread.

‘I’m not blaming the NHS as I know they have procedures to follow but it’s just so scary fighting this alone,’ Ms Shaw said.

‘There’s so many people who are going through the same horrendous ordeal as me, I wake up every day shaking with anxiety.

‘Every second of every day I feel terrified that I’m going to die and that I can’t get help here.’

Ms Shaw is hoping the money she raises will cover her travel costs to the US, as well as her treatment, which she expects she will require for the rest of her life.

‘America is very much ahead of their game when it comes to treatment but it comes at a very big price,’ she said.

‘I can’t put a cost on my life and time with Theo, so I am determined to make this work so at least I can say I tried.

‘Theo needs to see his mummy trying to fight this awful disease. I also hope my story shows other women there are other options when the NHS can’t help.

‘I don’t want anyone to think I’m being negative about the hospital I have been treated at as they’re amazing, it’s just a shame they don’t offer anymore options when it’s secondary.’ 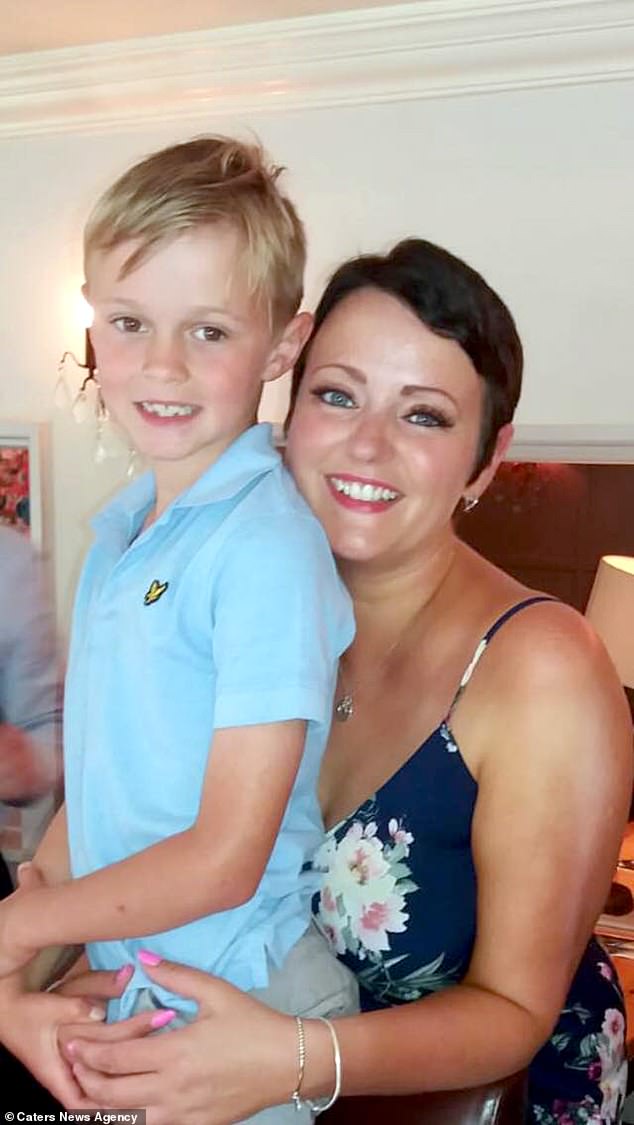 Pictured recently with Theo, Ms Shaw claims she wakes up every day ‘shaking with anxiety’ that she may die at any moment. With her terminal diagnosis, she feels ‘forgotten’ by doctors 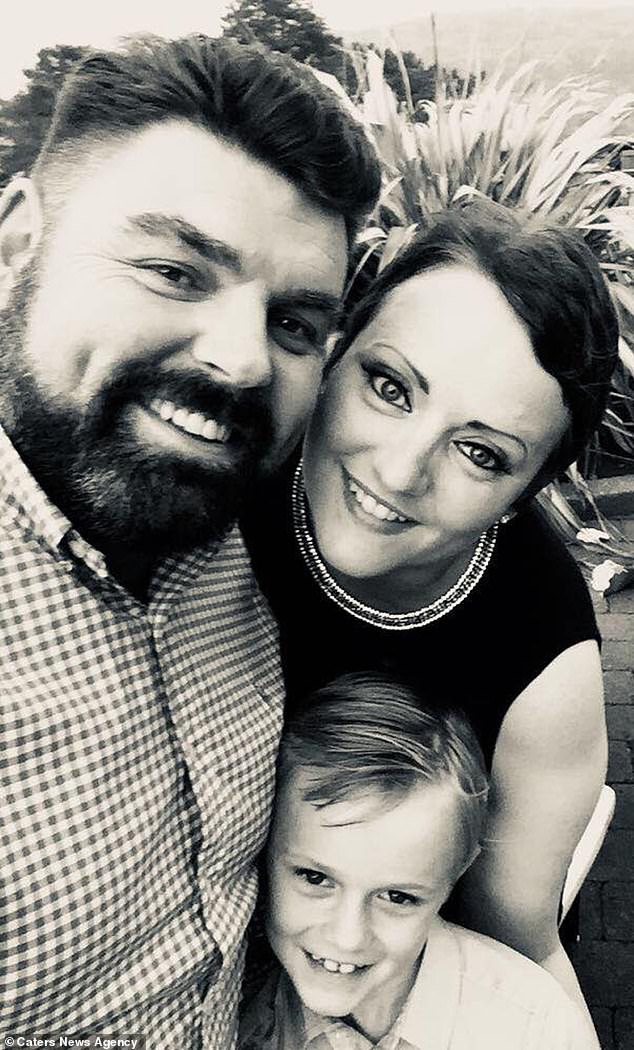 Pictured this year with Darren and Theo, Ms Shaw says she is too young to accept life is over

WHAT IS KEYTRUDA? AND IS IT AVAILABLE IN THE UK?

Keytruda (pembrolizumab) is an IV immunotherapy that works with a cancer patient’s immune system to help them fight the disease.

It does this by blocking PD-L1 on the surface of cancer cells. This takes the brakes off the immune system, setting it free to attack cancer cells.

Keytruda, developed by Merck, has been approved by the FDA to treat the following cancers:

In the US, Keytruda – injected twice a week – can be used in adults or children with any of the above cancers that cannot be surgically removed or have progressed following treatment.

In June 2018, NHS England announced the drug will be routinely available on the health service for patients with lung cancers that have spread. It can already be dished out for patients with melanoma or Hodgkin lymphoma.

Some patients have chosen to have the treatment privately.

Studies show the drug can shrink different types of tumours and boost a patient’s response to other treatments.

But Keytruda can also cause the immune system to attack healthy organs and tissue, which can be life threatening. Complications may include colitis, hepatitis or kidney failure.

Ms Shaw was told her breast cancer had returned and spread to her liver in August after being diagnosed with pneumonia.

Doctors scanned her lungs and the surrounding areas to assess the infection, only to discover her cancer had come back.

‘I felt really unwell as soon as I got back from holiday,’ she said. ‘I couldn’t believe it when I was told my cancer was back.

‘I’d had a lumpectomy after my first diagnosis the year before but having a mastectomy now isn’t an option as the cancer is so aggressive.

‘It has been a whirlwind ever since but, despite it all, I have tried to enjoy as much time with my son, Theo, and boyfriend, Darren, as possible.’

‘I’m so grateful to everyone who has already donated,’ she said.

‘I am hoping I’ll be able to go to America at the start of next year for the immunotherapy treatment.

‘It won’t cure me but it could make my cancer stable.’

NHS England and NICE have both been approached for comment. 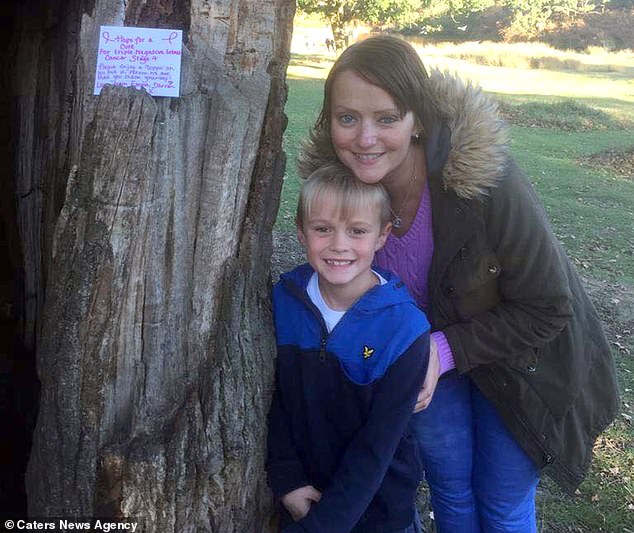 She claims she cannot put a cost on her life or her remaining time with Theo, which motivates her to keep fundraising so she can ‘at least say she tried’. They are pictured this year 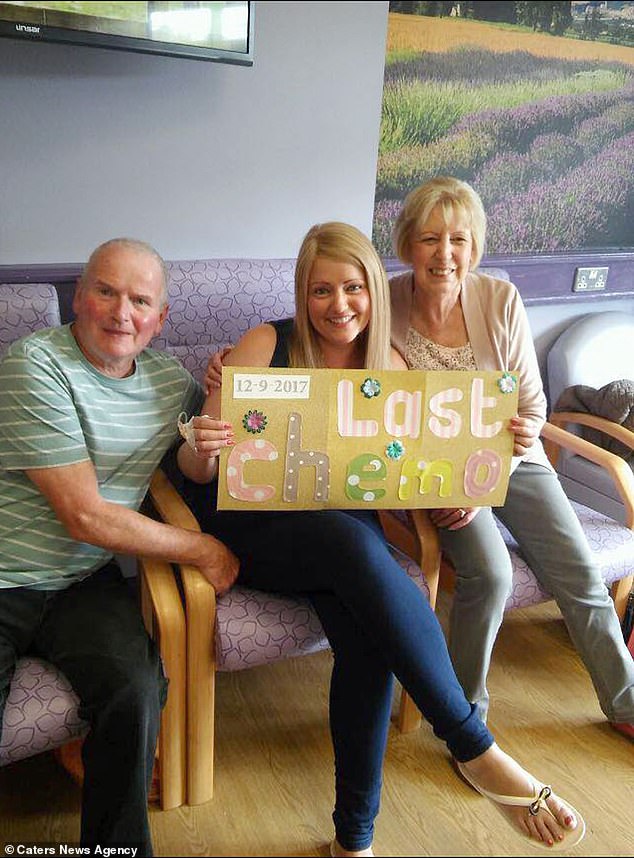 Ms Shaw celebrated her ‘last’ chemo session for triple negative breast cancer on September 12 last year. Months later she was given the all clear, only to discover it had returned and invaded her liver last August while being treated for pneumonia. She is pictured with her parents