They’ve been romantically linked ever since they were spotting packing on the PDA at London’s Heathrow Airport in August.

And Cara Delevingne and Ashley Benson proved they are closer than ever as they arrived at Gatwick Airport on Friday evening hand-in-hand.

The model, 26, looked besotted with her rumoured girlfriend as she planted a tender kiss on her hand, whilst the pair strolled along.

Adorable: Cara Delevingne, 26, and Ashley Benson, 29, proved they are closer than ever as they arrived at Gatwick airport on Friday evening hand-in-hand

The catwalk queen accessorised her simple ensemble with a red-topped woven fedora, which she clutched in her hand.

With a rucksack on her back and headphones draped around her neck, Cara looked well-prepared to jet off with her beau.

The model sported a black headband tied around her dishevelled short blonde locks, shielded her face with stylish shades. 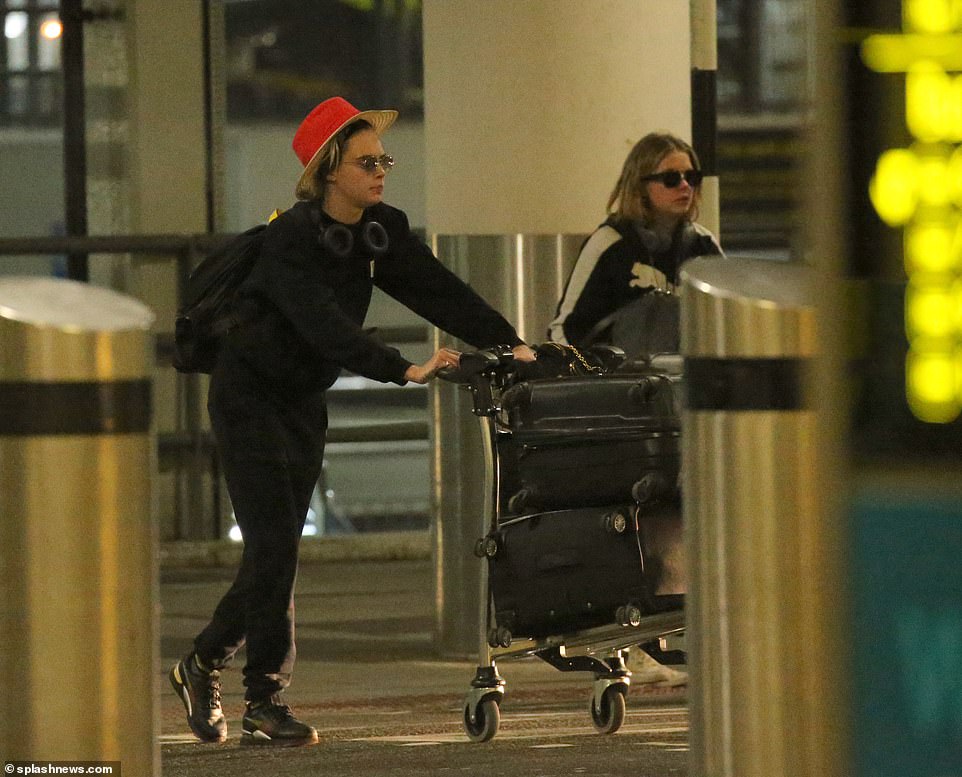 Let’s go! The couple pushed trolleys piled-high with their suitcases 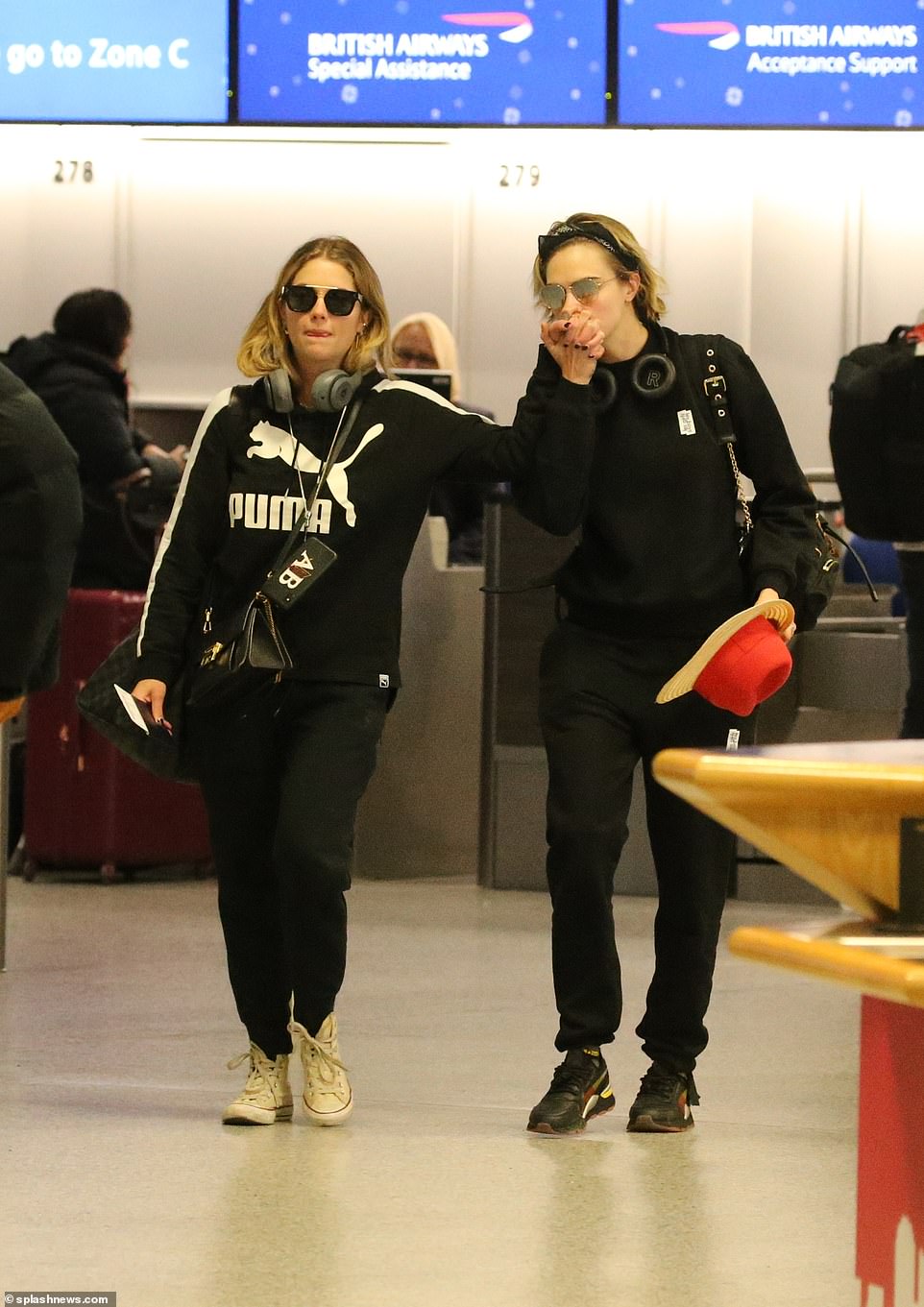 Loved-up: The model looked besotted with her rumoured girlfriend as she planted a tender kiss on her hand, whilst the pair strolled along 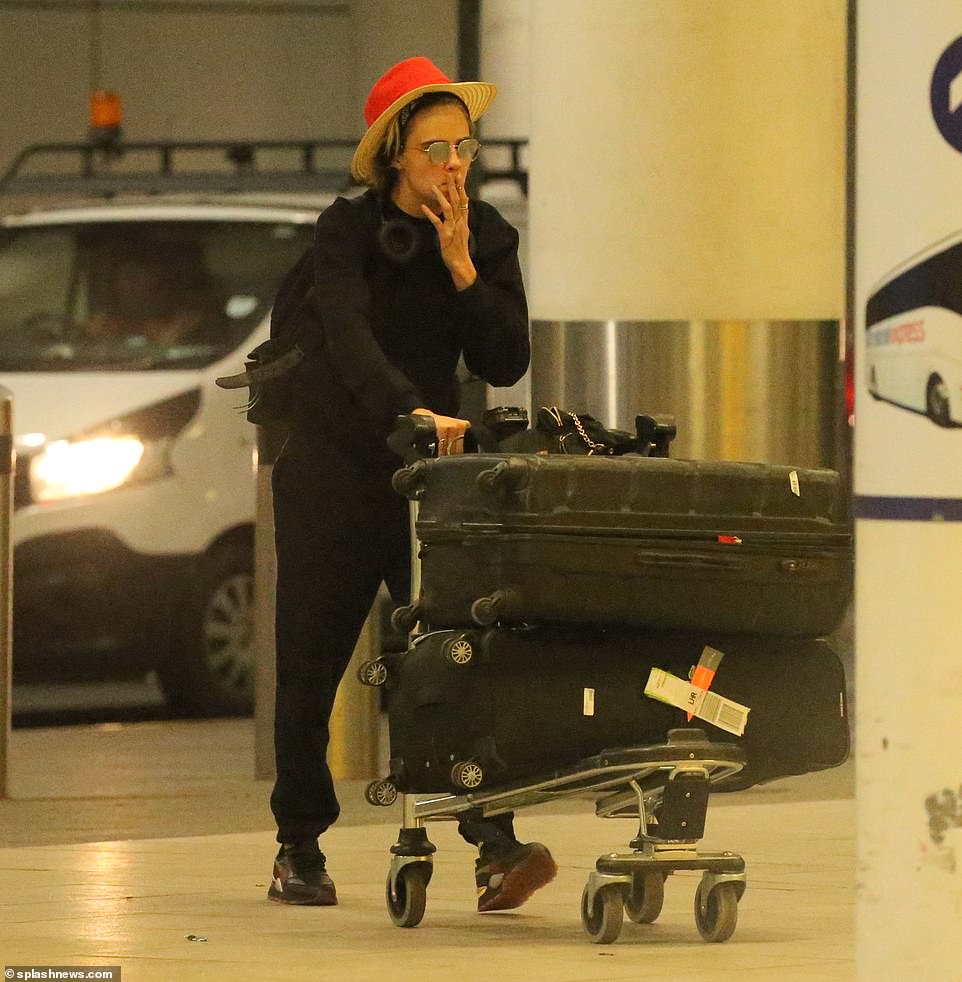 Smoke break: As she made her way into the airport, Cara puffed on a cigarette, while pushing her luggage trolley

As she made her way into the airport, Cara puffed on a cigarette, while pushing her luggage trolley.

Meanwhile, Ashley, who recently turned 29, kept comfy in a cosy tracksuit of her own, with white panelling and a Puma logo adding some light relief to her monochrome two-piece.

She draped the long strap of her chic black saddle bag across her body, and also draped headphones around her shoulders. 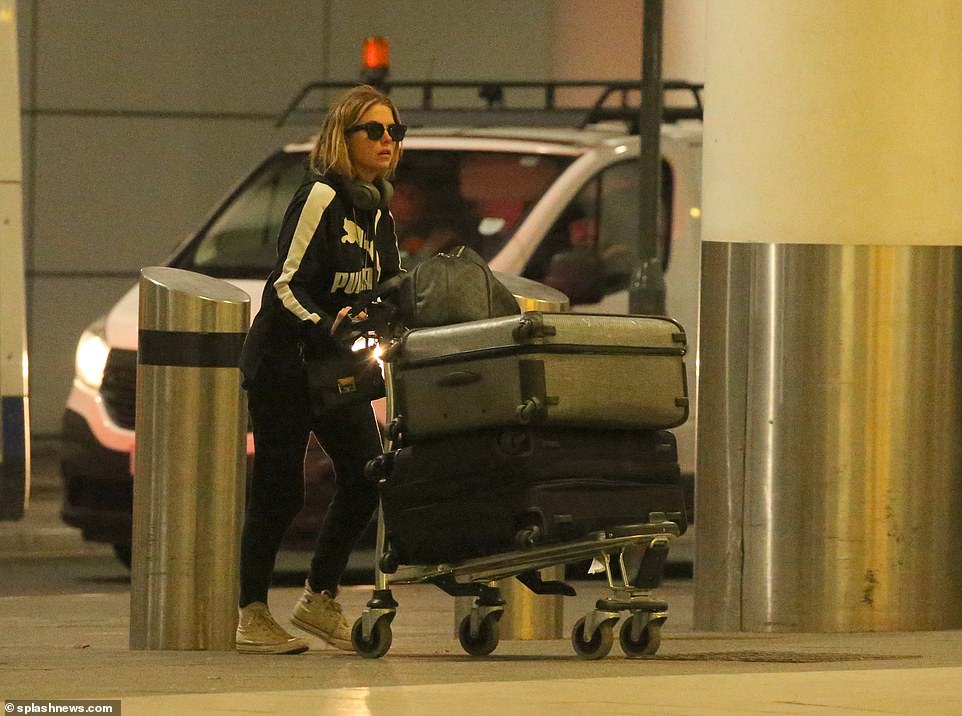 Keep up! Cara was followed by her rumoured girlfriend Ashley Benson 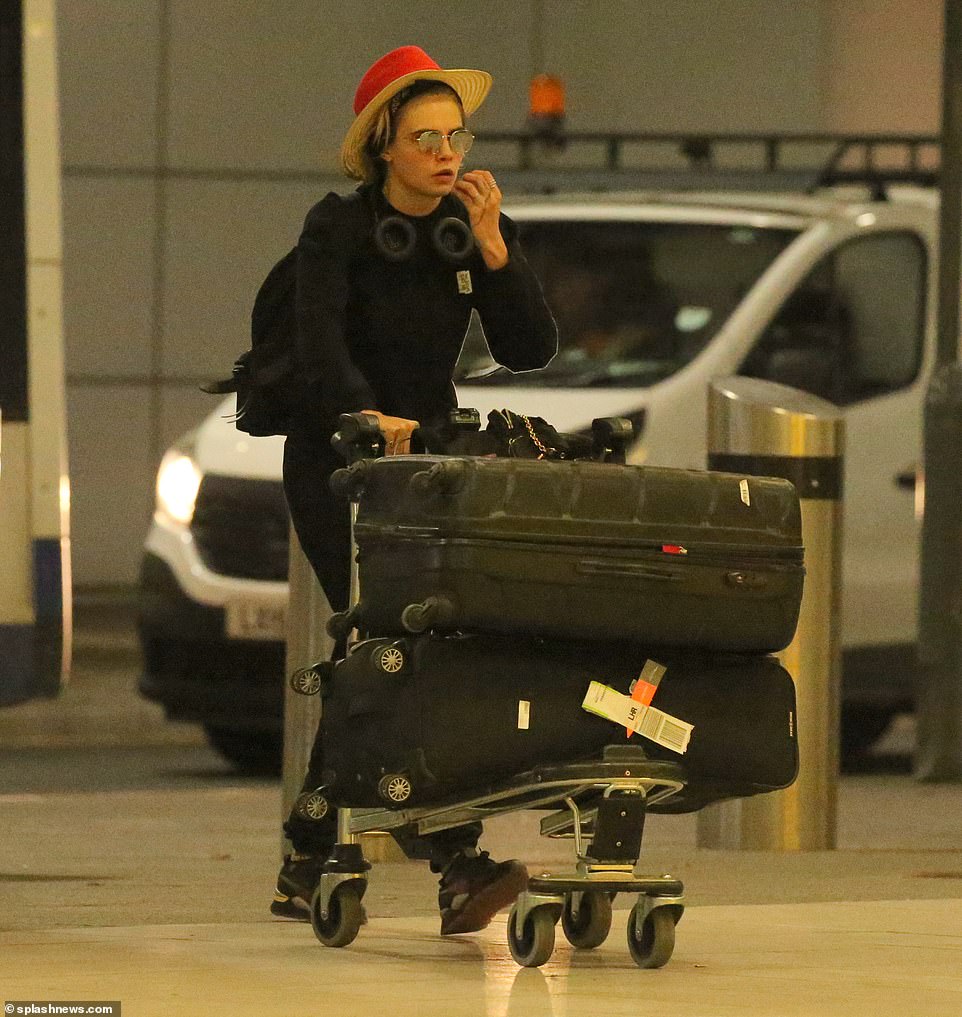 Despite being inside, Ashley too sported a pair of sunglasses as she strolled through the airport next to Cara.

The Spring Breakers actress wore her tresses in stunning loose waves and opted for a black manicure.

After transferring their suitcases onto the luggage belt at check-in, the lovebirds energetically high-fived each other.

Cara and Ashley reportedly started dating in May but ‘wanted to keep things under the radar so they could get to know each other outside of the spotlight first,’ reported a source from Life and Style in November. 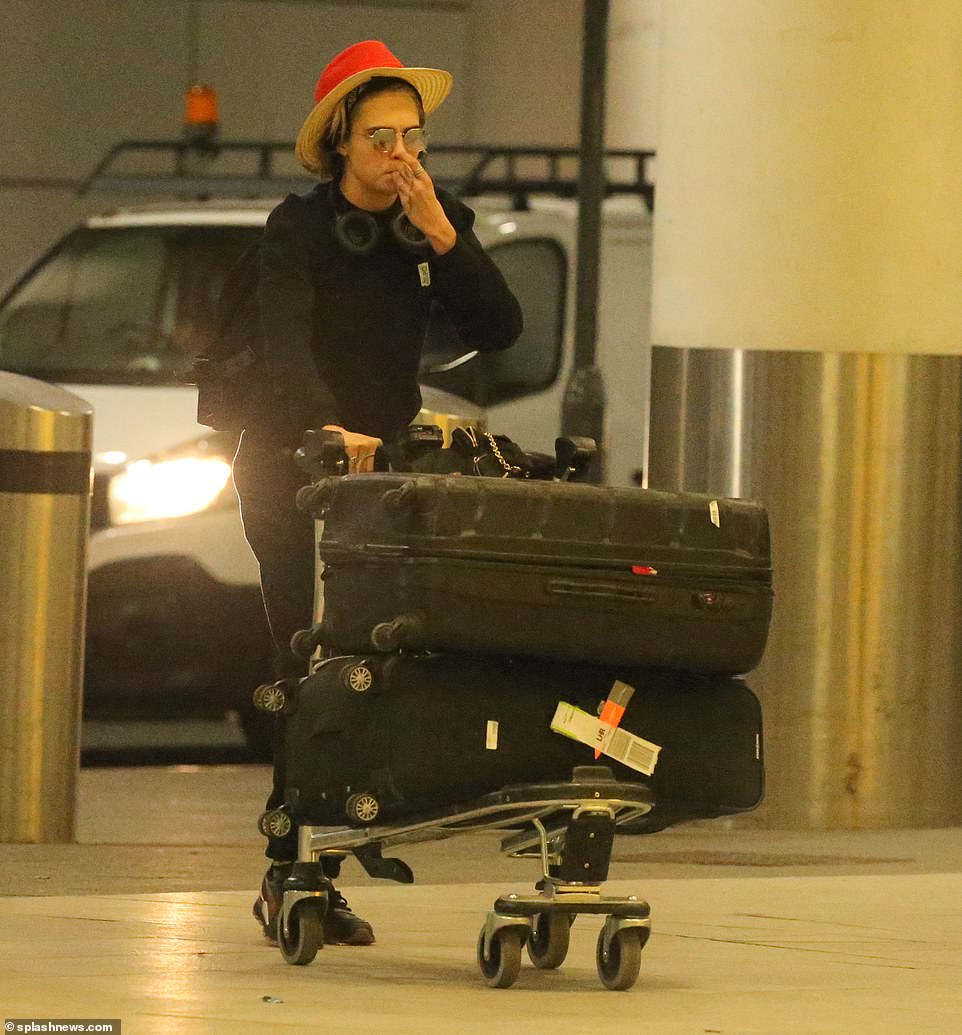 Bold: The catwalk queen accessorised her simple ensemble with a red-topped woven fedora 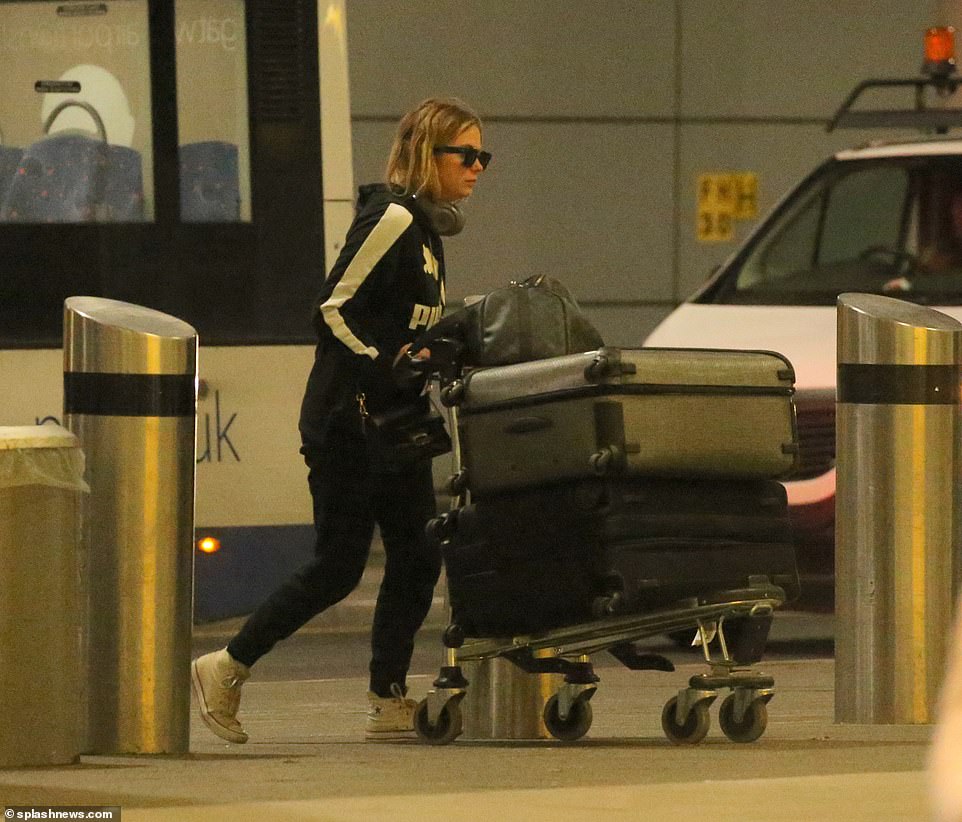 Stylish: Meanwhile, Ashley, who recently turned 29, kept comfy in a cosy tracksuit of her own

Chic: White panelling and a Puma logo added some light relief to her monochrome two-piece

‘Ashley’s met Cara’s sisters, and she’ll meet the rest of her family next. They’re crazy about each other’, they added.

In more recent weeks, there was speculation that Ashley and Cara may have broken up, but from the looks of the birthday bash, they appear to be back ‘on.’

Ashley, a Southern California native, is best know for her role as Hanna Marin in the teen mystery-drama television series Pretty Little liars from 2010 to 2017. 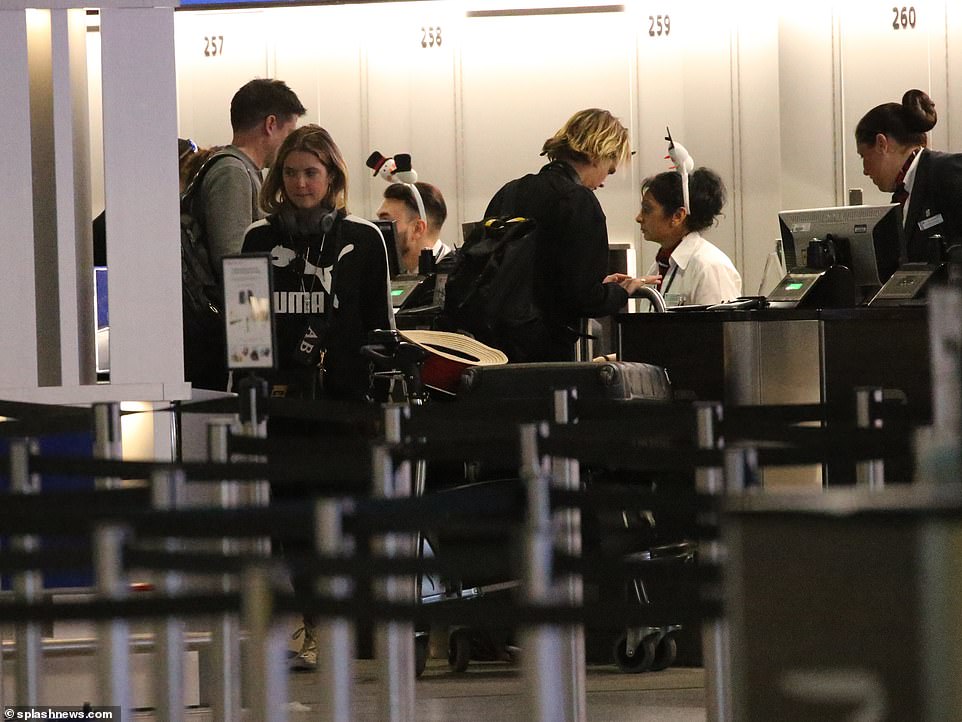 Checking in: Cara took charge of their check-in, while Ashley took a back-seat 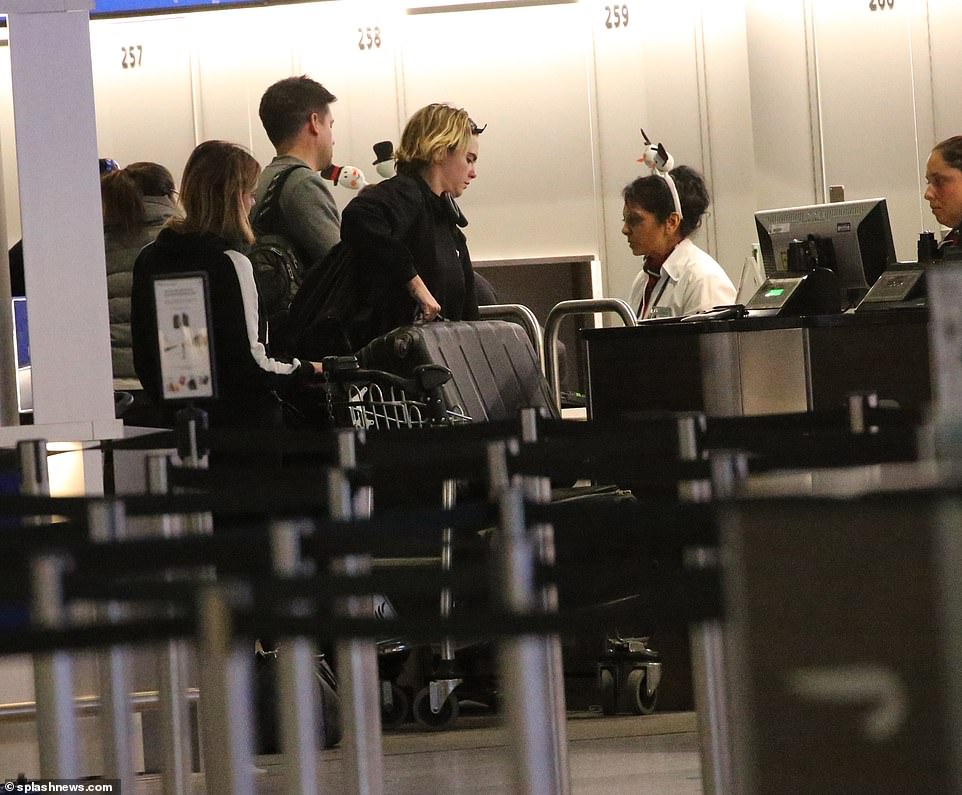 Heave: The model lifted their suitcases onto the luggage ramp 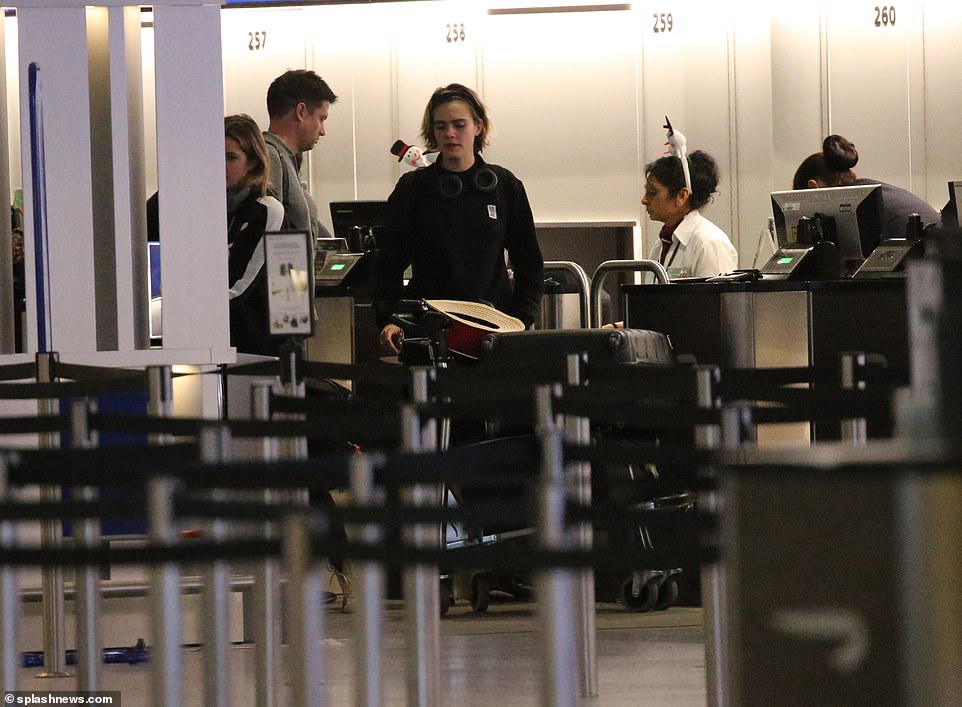 And again: Cara appeared to do the bulk of the heavy lifting

British-born Cara hit the modeling scene running at the young age of 17 in 2009 and went on to win the Model Of The Year award at the British Fashion Awards in 2012 and 2014.

Among other high-accolades, she has also had a number small acting roles beginning with 2012’s Anna Karenina.

Flights have resumed at Gatwick after another drone sighting forced the airport to shut its runway yet again tonight.

Planes were grounded again at 5pm tonight, throwing passengers into fresh chaos just days before Christmas as the drone pilot responsible for the havoc remained at large. 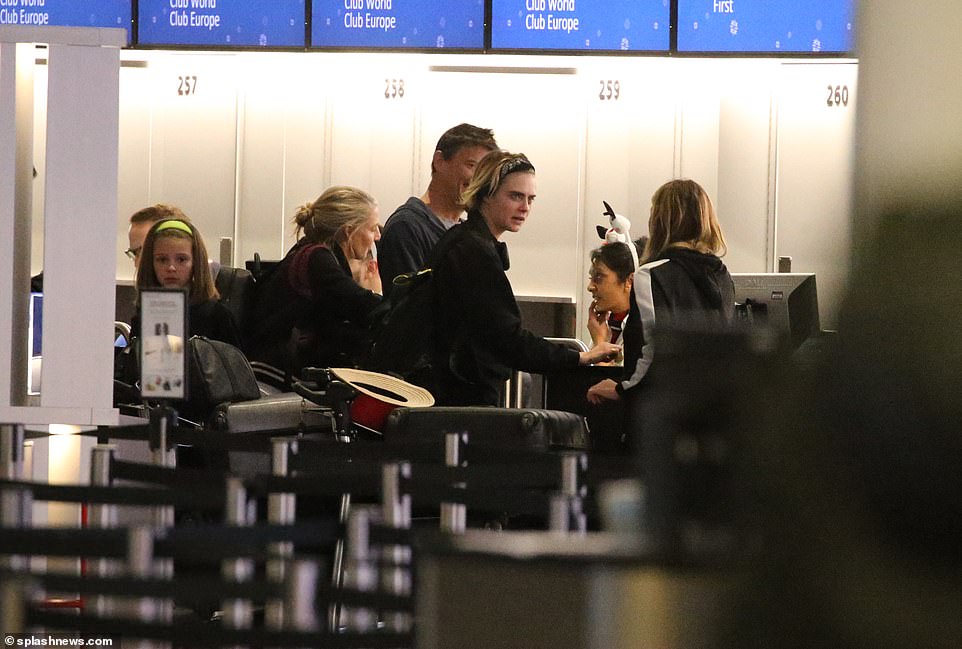 Chatty: The pair chatted away during their check-in 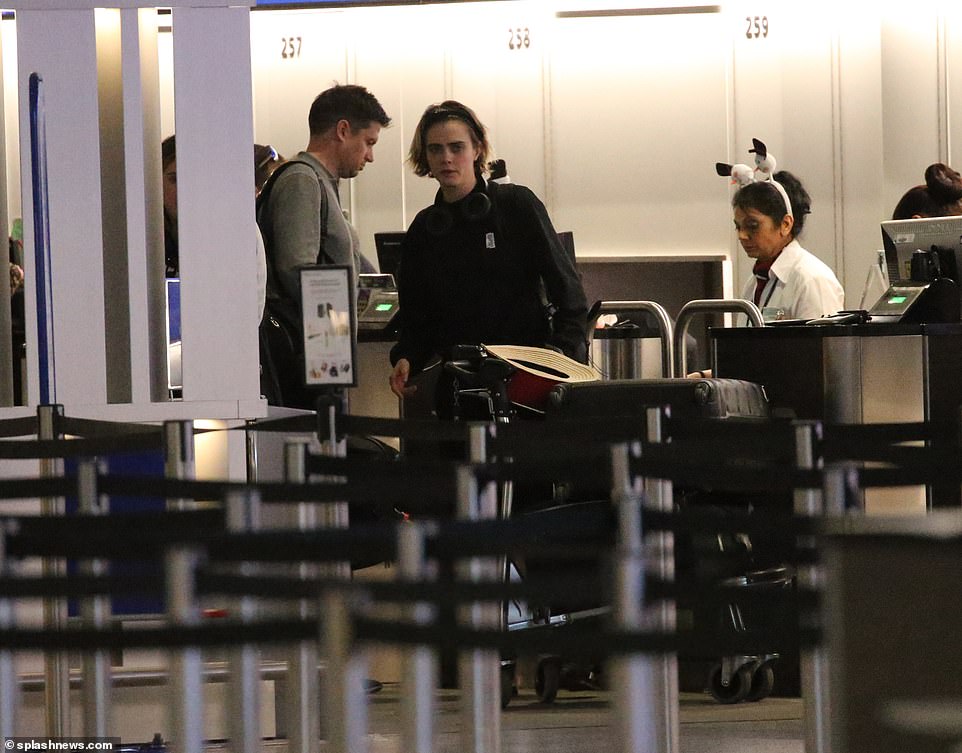 Thousands of flights were grounded on Thursday causing travel chaos for 110,000 stranded passengers after a drone was spotted over Gatwick Airport.

Cara and Ashley were amongst the celebrities facing an uncertain Christmas as they were caught up in the conflict caused by the drone.

Former Top Gear presenter Jeremy Clarkson, 58, launched into a expletive-laden rant as he vowed vengeance on the unknown person controlling the drone, which caused all 760 flights in and out of Gatwick on Thursday to be cancelled.

He ranted: ‘I really hope that when the fat s**t at Gatwick is caught, someone kills him.’

Vengeful: Former Top Gear presenter Jeremy Clarkson, 58, launched into a expletive-laden rant as he vowed vengeance on the unknown person controlling the drone, which caused all 760 flights in and out of Gatwick on Thursday to be cancelled 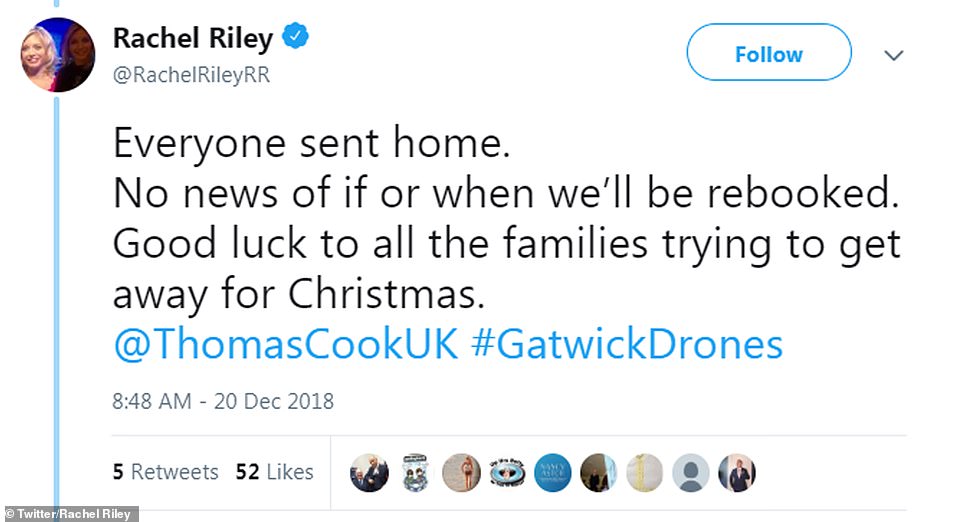 Positive side: The blonde beauty faces a two day delay for her flight What’s going on? Cara pondered proceedings, with Ashley by her side 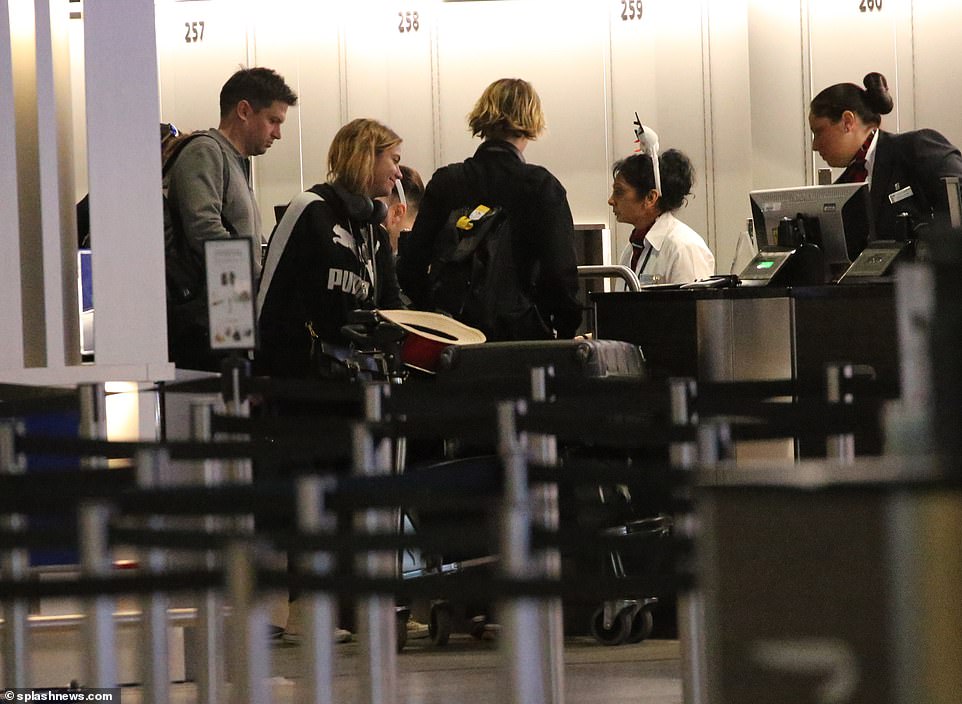 Happy lady: Ashley flashed a smile as they prepared for their Christmas getaway

Countdown maths guru Rachel Riley, 32, opted to look on the positive side of the cancellation as she tweeted about home comforts.

The unmanned aircraft was spotted again at around 9pm on Thursday after the airport remained shut all day, with police and the drone pilot going head-to-head in a bid to stop the chaos.

Gatwick Airport told passengers not to come to the airport on Friday as the drone drama entered a third day, plunging tens of thousands of people into chaos on the busiest day of travel before Christmas. 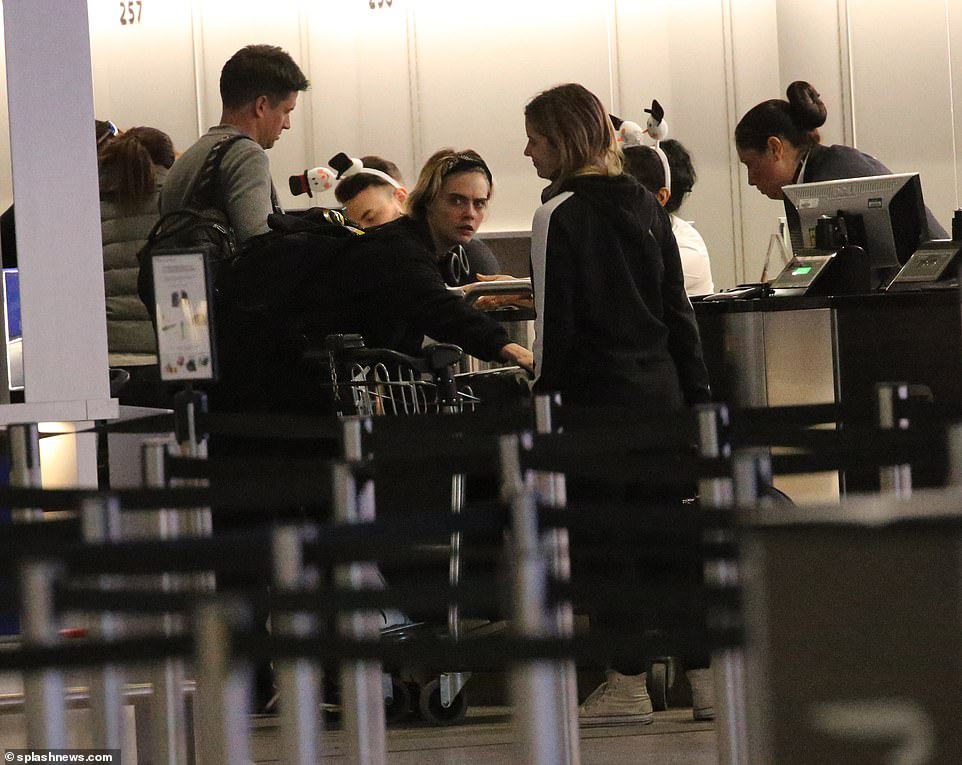 Just a little longer: Cara shifted the last of their luggage onto the belt 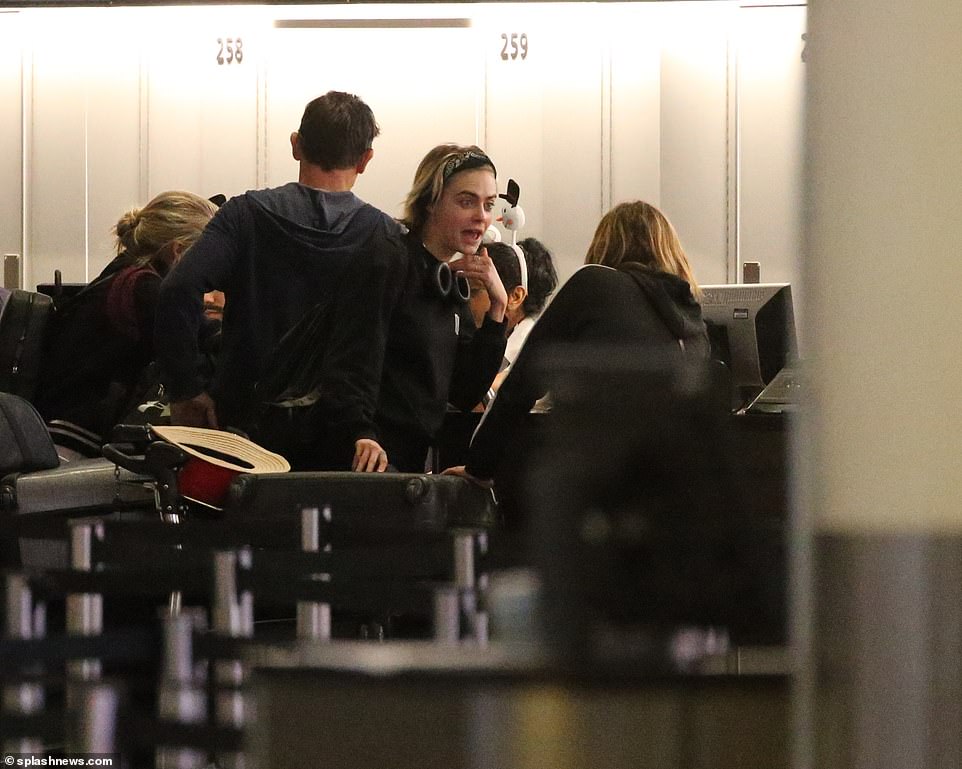 Exciting times: The couple appeared to be elated after hearing confirmation of their flight 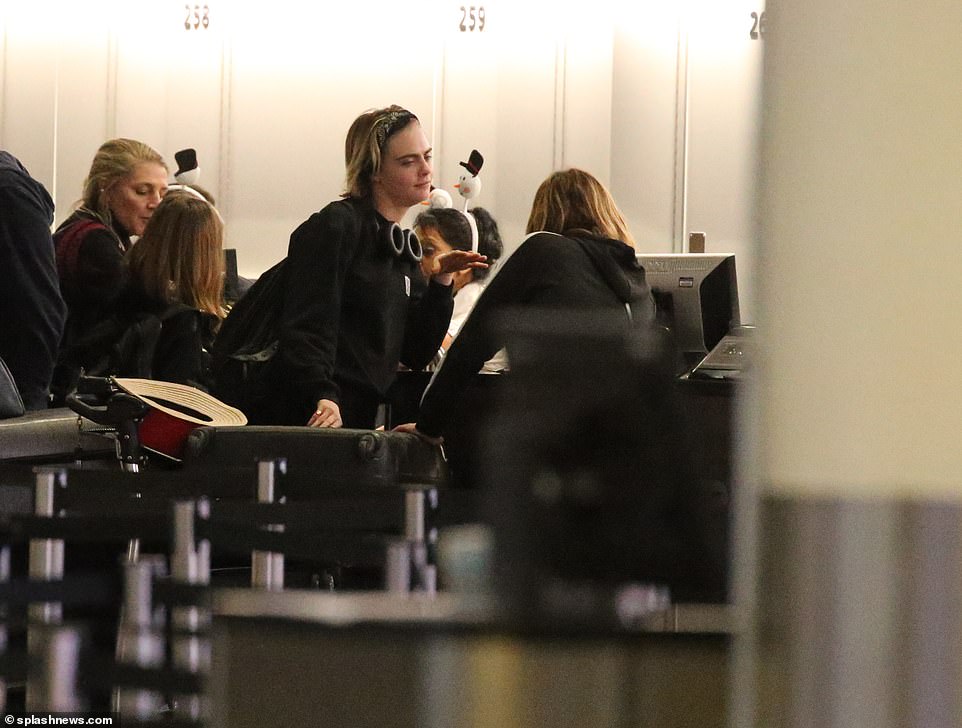 Don’t worry! Cara seemed to be unconcerned by any of the chaos at Gatwick

On Thursday a Gatwick spokesperson said passengers should not come to the airport ‘for the foreseeable future including tomorrow’ when even more holidaymakers had travel plans.

At least 25 flights were cancelled on Friday with others severely delayed while trackers suggested planes were being diverted to Stansted, Luton and Heathrow after the last plane landed at Gatwick at 4.59pm.

Just over an hour later Gatwick said planes had returned to the air, saying the ‘military measures in place at the airport’ would ensure the safety of passengers.

The Army had earlier used jamming devices in the hope of knocking the drone out of the sky as police scoured the Sussex countryside in a bit to find the culprit. 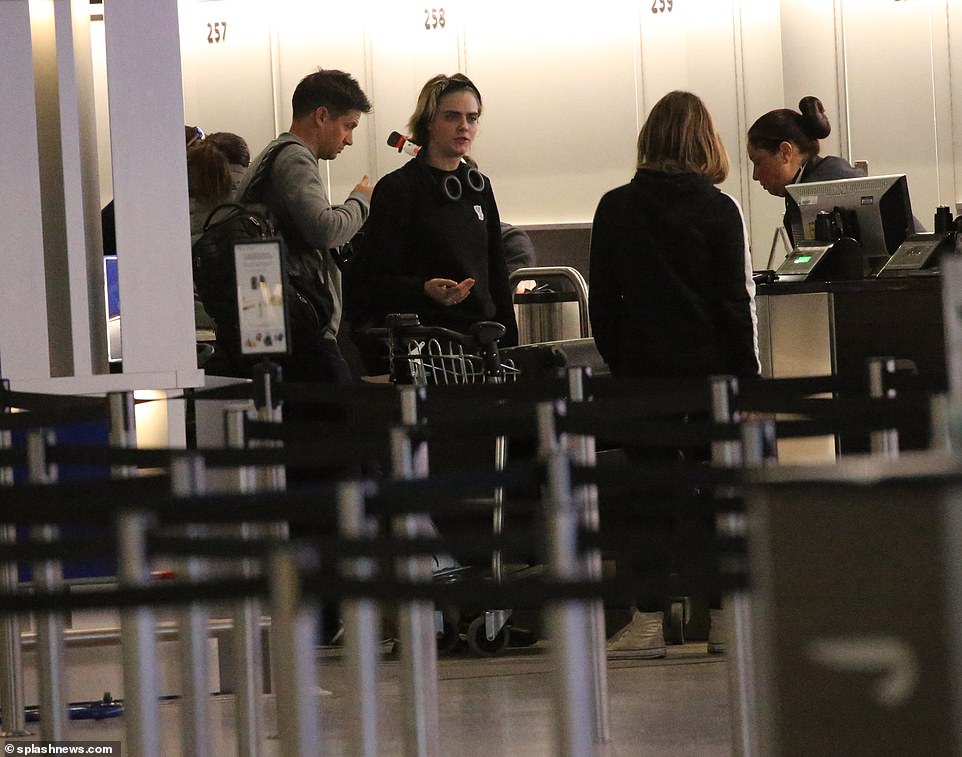 Matchy-matchy: The couple looked in-sync in their black tracksuits 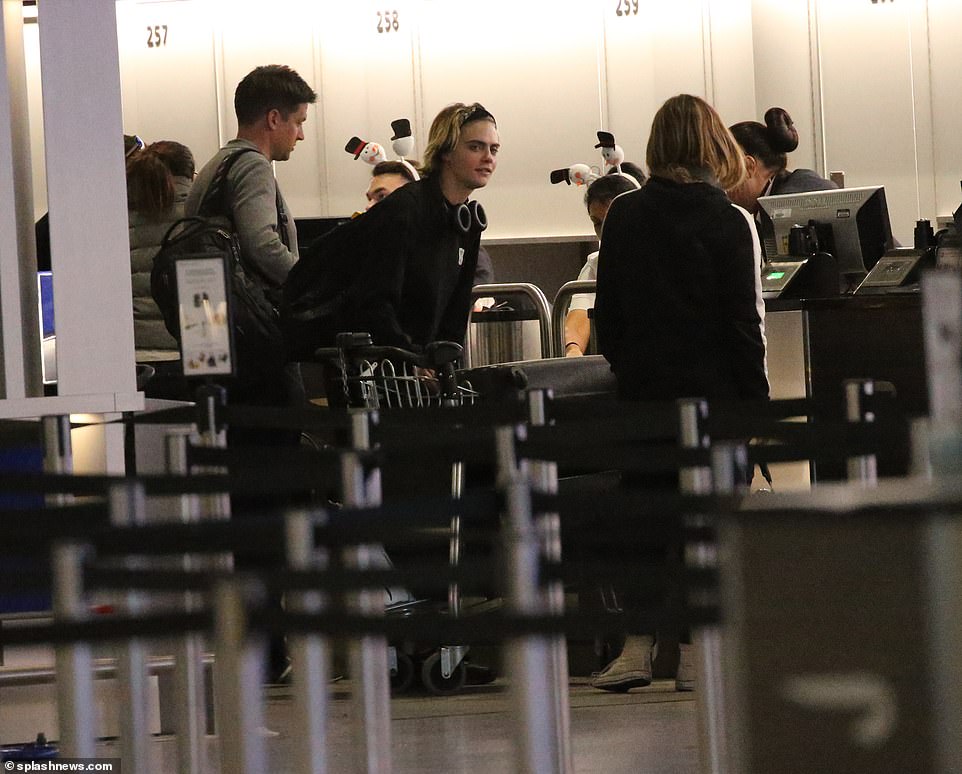 Can’t wait: Cara looked eager to get checked in and spend time with her beau 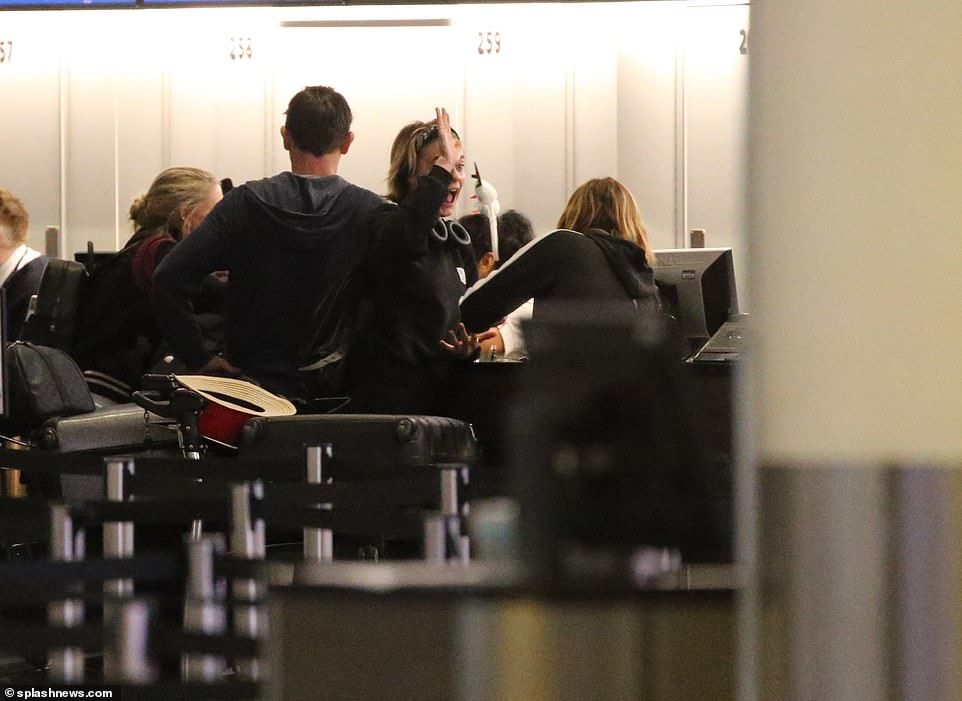 Yes! The blonde beauty joyfully instigated a high-five with Ashley

Police said they were closing in on the pilots who used ‘multiple’ drones to shut down Gatwick’s runway and even taunted officers by zooming over their heads while flashing lights at them.

Detectives have identified ‘persons of interest’ but have failed to make any arrests 48 hours after the chaos began.

In a statement tonight, Gatwick Airport said: ‘Flights have now resumed at Gatwick following a reported drone in the area.

‘While we investigated, airfield movements were suspended. This was a precautionary measure as safety remains our main priority.

‘The military measures we have in place at the airport have provided us with the reassurance necessary that it is safe to reopen our airfield.’ 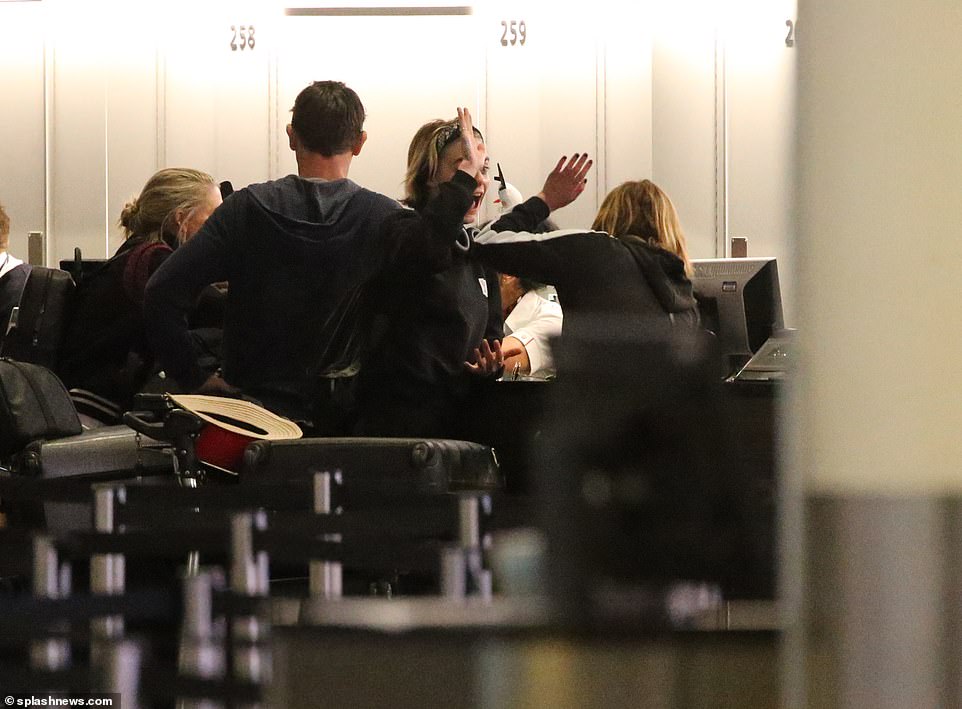 Get in! While still sorting her belongings, Ashley reached up to celebrate with her beau 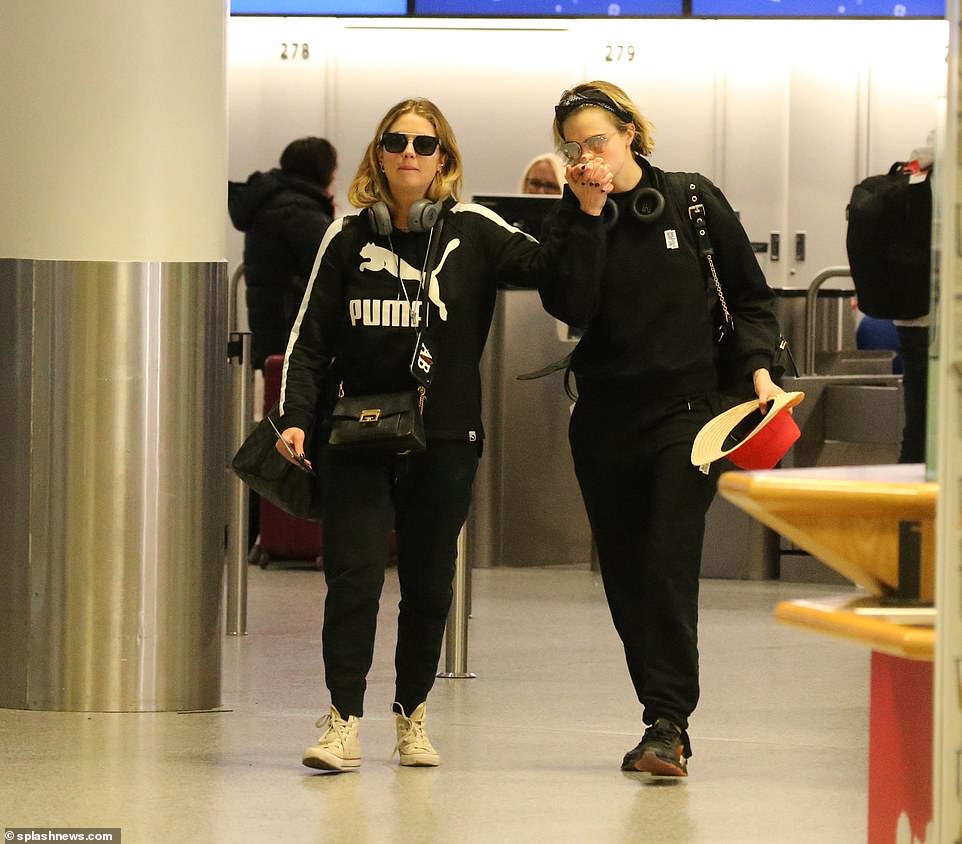 Let’s do this! With their luggage checked in, Cara planted a loving kiss on Ashley’s hand as the couple strolled through the airport to board their flight