Housing and Urban Development Secretary Ben Carson said he wasn’t that involved in picking out a dining set that could have cost taxpayers $31,000 because ‘I’m not really big into decorating.’

Carson’s latest statements on the expensive office furniture were delivered to lawmakers at a House Appropriations subcommittee hearing on Tuesday.

‘If it was up to me, my office would probably look like a hospital waiting room,’ Carson said, according to the Washington Examiner, noting that with his wife’s help he redecorated his HUD digs, as he was told that was what new secretaries did.

But the overpriced furniture set has gotten Carson a lot of negative attention, especially in light of other Trump cabinet secretaries under fire for misusing government dollars on travel.

On Tuesday, Carson stuck to his story that he wasn’t really aware of what was going on despite emails, which CNN obtained, describing the furniture as a set ‘the Secretary and Mrs. Carson picked out.’

He told lawmakers he had green-lit a new dining room set being purchased, but was unable to be part of the selection process because he ‘had so many other things to do at that point.’

Secretary of Housing and Urban Development Ben Carson (left) has come under fire for his agency’s use of taxpayer dollars to fund a $31,000 dining room set for his office. His wife Candy Carson (second from left) helped with the redecorating efforts, he said 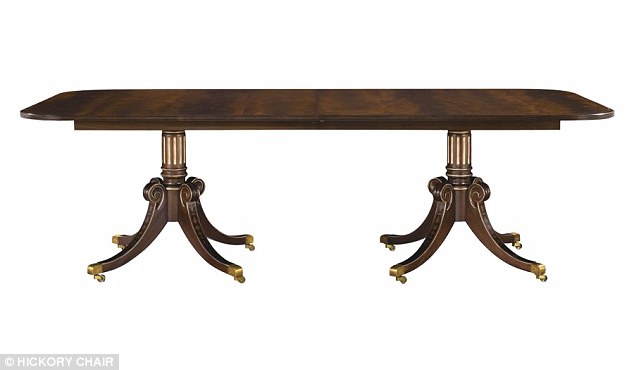 This dining room table was part of a set picked out by Ben Carson and his wife, newly unearthed correspondence shows. Carson initially said he was ‘as surprised as anyone’ to hear that an order for the furniture, totaling $31,000, had been placed 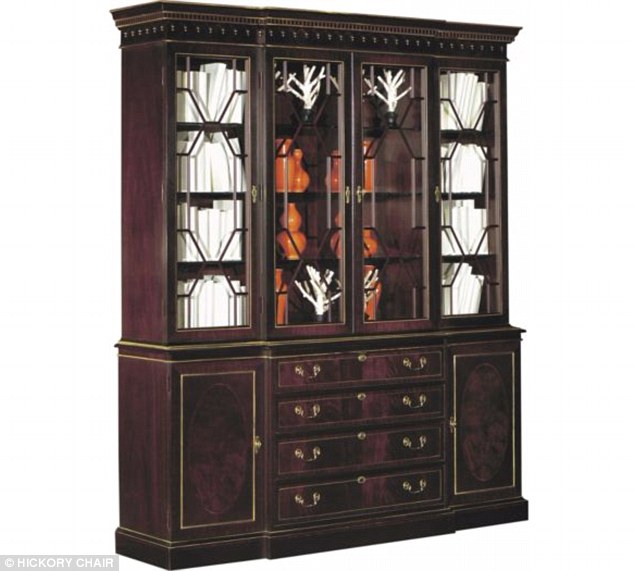 This dish cabinet was the most expensive part of the set, costing taxpayers $7,091. HUD Secretary Ben Carson said Thursday he was cancelling the order 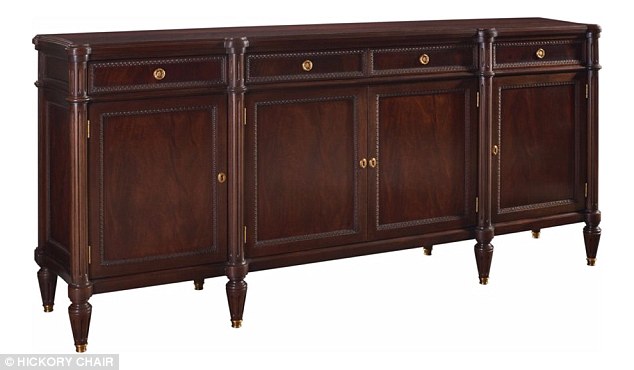 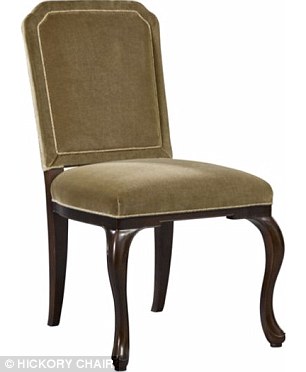 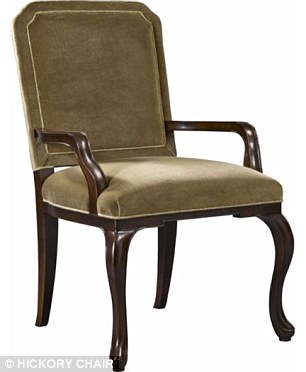 These two types of chairs are part of the dining room set that was ordered for HUD Secretary Ben Carson. He said in a statement Thursday that he was cancelling the order 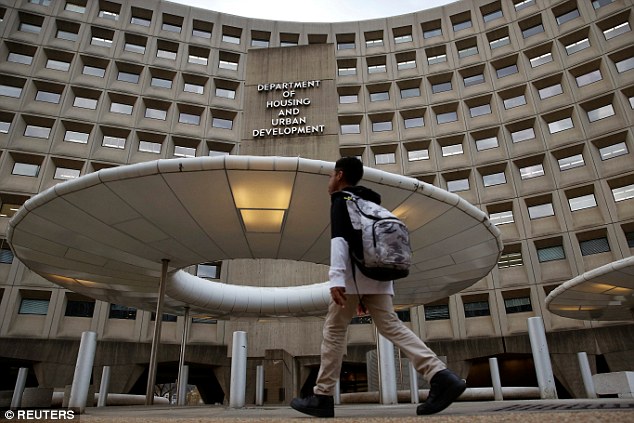 In a statement, Ben Carson explained that the dining room furniture found at the HUD headquarters (pictured) in Washington, D.C., was 30 to 50 years old and needed to be replaced. He also said he had scoffed at the cost 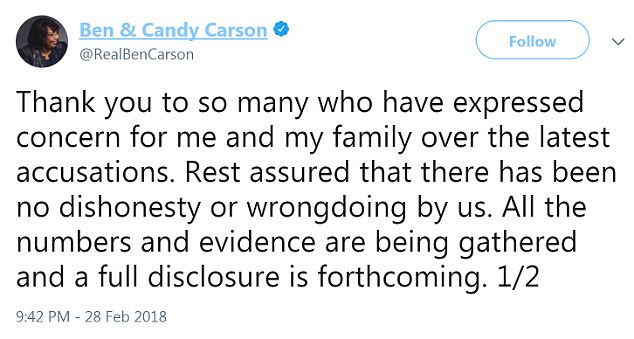 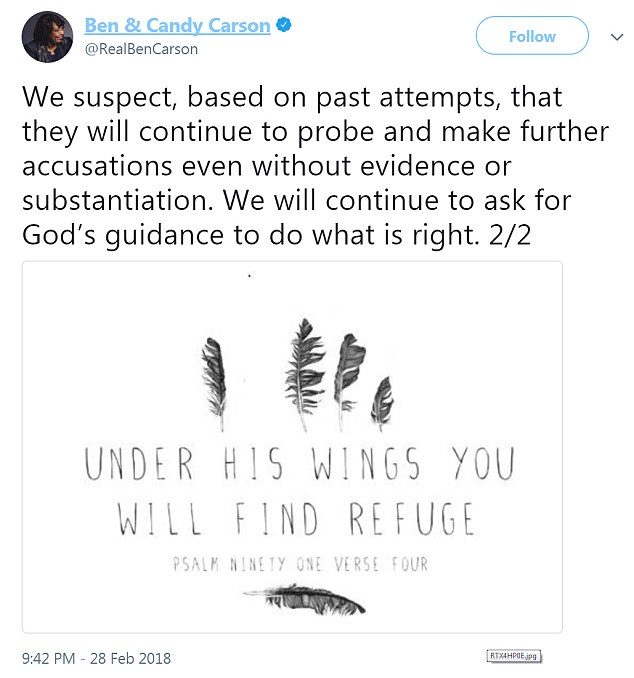 He and his wife Candy used Twitter to craft their original response to the scandal, which started when the Guardian broke a story about how long-serving HUD worker had been asked to find more than the mandated $5,000 for office redecorating

His original defense slightly differed, with the HUD secretary, a former brain surgeon, saying he was ‘surprised as anyone’ to find out that an order had been placed for the $31,000 set.

HUD’s spokesman Raffi Williams initially told CNN that Mrs. Carson and the secretary had ‘no awareness’ that the furniture set as being purchased, blaming it on unnamed ‘career staffers in charge of the building.’

When shown emails last week that mentioned the couple had been involved in picking the set, Williams told CNN, ‘When presented with options by professional staff, Mrs. Carson participated in the selection of specific styles.’

Secretary Carson has been in the White House’s doghouse since late February, according to CNN, over fallout from accusations first reported in the Guardian that a senior career official had been demoted for refusing to spend more than the mandated $5,000 on office redecorating.

The official, Helen Foster, had reported to a watchdog for federal workers that she was told, ‘$5,000 will not even buy a decent chair,’ after informing her bosses of the legal cap for improvements for the HUD secretary’s suite.

Foster’s complaint letter alleged that on the day before President Trump’s swearing-in ceremony, she was asked by acting HUD head Craig Clemmensen to help Candy Carson, the nominee’s wife, find funds to use to redecorate Ben Carson’s soon-to-be office.

When Foster told Clemmensen that the statutory limit was $5,000, the official told her that administrations had ‘always found ways around that in the past,’ according to the Guardian.

Several weeks later on February 10, 2017, Foster was told by Clemmensen again ‘to “find money” for Mrs. Carson,’ the complaint alleges, and that ‘$5,000 will not even buy a decent chair.’

Foster then complained to HUD’s budget director about being asked to break the spending cap.

Foster claims she was demoted and replaced by a political appointee for her protests.

CNN then reported that $31,000 was spent on a dining room set, citing federal records and a whistleblower.

‘Thank you to so many who have expressed concern for me and my family over the latest accusations,’ the @RealBenCarson account tweeted.

Before I actually occupied my office, I was told what previous secretaries did when they redecorated. I was asked what I wanted to do.

I visited the basement where previously used furniture was kept and my wife visited as well. We selected some chairs and made some minor changes. Additionally drapes that had previously hung in my office were brought back and blinds were put on the windows. The total redecoration cost was less than $3500. This is considerably less than the historical norm.

The secretary’s dining room is used for business luncheons with a wide variety of people and groups. The furniture is 30 to 50 years old and is very worn. It has also been characterized as unsafe.

I did not request new furniture, but asked if it could be remediated. I was subsequently told that it was beyond repair and needed to be replaced.

I briefly looked at catalogs for dining furniture and was shocked by the cost of the furniture. My wife asked if used furniture was an option. Our acquisition process did not allow for that.

We were told there was a $25,000 budget that had to be used by a certain time or it would be lost. I indicated that they needed to take care of the needs of the deputy secretary out of that money too. My wife also looked at catalogs and wanted to be sure that the color of the chair fabric of any set that was chosen matched the rest of the decour.

I made it known that I was not happy about the prices being charged and that my preference would be to find something more reasonable.

I left this matter alone to concentrate on much bigger issues. I was as surprised as anyone to find out that a $31,000 dining set had been ordered. I have requested that the order be canceled. We will find another solution for the furniture replacement.

‘Rest assured that there has been no dishonesty or wrongdoing by us,’ the message continued. ‘All the numbers and evidence are being gathered and a full disclosure is forthcoming.’

‘We suspect, based on past attempts, that they will continue to probe and make further accusations even without evidence or substantiation. We will continue to ask for God’s guidance to do what is right,’ the couple wrote in a second tweet, which included an image and a Bible verse.

The next day, Carson, through his longtime political aide Armstrong Williams, wrote a play-by-play of what he said happened.

Carson, who ran for the Republican nomination for president in 2016, explained that before he became HUD director he was asked what he wanted to do about his office, as other secretaries had redecorated.

‘I visited the basement where previously used furniture was kept and my wife visited as well,’ he said. ‘We selected some chairs and made some minor changes.’

He said he picked out drapes that had previously been used in that office, along with blinds for the windows.

‘The total redecorating cost was less than $3,500,’ Carson said. ‘This is considerably less than the historical norm.’

As for Carson’s dining room, the HUD boss said that his furniture was between 30 and 50 years old.

‘It has also been characterized as unsafe,’ he noted.

‘I did not request new furniture, but asked if it could be remediated,’ Carson added. ‘I was subsequently told that it was beyond repair and needed to be replaced.’

Carson said when looking through catalogs of furniture he was ‘shocked’ at the cost, and Candy had asked him if used furniture was an option.

The HUD secretary said the agency’s ‘acquisition process did not allow for that.’

‘We were told there was a $25,000 budget that had to be used by a certain time or it would be lost,’ Carson said, adding that he had asked that that money meet the needs of his deputy secretary too.

The emails made public by CNN last week show that HUD’s scheduling office had reached out to Candy Carson in early August and warned her that fiscal year spending was coming to a close.

‘His Mrs. Carson!’ the scheduler wrote, according to CNN. ‘There is a designer who will be in town next week on the 15th-17th to look at possibly redecorating the Secretary’s office and bringing in new furniture. Are you available on any of those dates and would you like to come in and have input on the redecorating?’

‘We must have the order for new furniture in before the 21st in order to use the money allocated for this fiscal year,’ the scheduler added.

Secretary Carson, in his initial statement, also said his wife picked out fabric for the chairs.

‘My wife also looked at catalogs and wanted to be sure that the color of the chair fabric of any set that was chosen matched the rest of the decour,’ he said. ‘I made it known that I was not happy about the prices being charged and that my preference would be to find something more reasonable.’

A small price increase for the upholstered chairs, as well as delivery and installation charges, were what increased the price by $7,000, according to CNN.

Secretary Carson said he had left this matter to ‘concentrate on much bigger issues.’

‘I was as surprised as anyone to find out that a $31,000 dining set had been ordered,’ he said. ‘I have requested that the order be canceled. We will find another solution for the furniture replacement.’

Carson repeated that line of defense Tuesday when he was in front of the lawmakers.

‘I investigated it, immediately had it canceled,’ he said of hearing about the $31,000 price tag from media reports. ‘Not that we don’t need the furniture, but I thought that that was excessive.’