The CDC has now confirmed that coronavirus was already spreading throughout New York City from Europe by the time Donald Trump banned travelers from the EU and UK entering the US in March.

A new report from the health agency released Friday provides more evidence that the first cases of the deadly virus in NYC came from Europe and not from Wuhan, China, where the global health crisis originated.

It also shows stay-at-home orders, travel bans and school closures all came too late to stop the outbreak ravaging the Big Apple – which soon became the virus epicenter with more than 18,000 being killed in the outbreak.

The CDC described the findings as ‘unanticipated’ while New York Governor Andrew Cuomo said it was ‘damning’ and proved key flaws in the president’s handling of the crisis.

CDC researchers analyzed the genetic code of virus samples collected from three dozen infected New Yorkers in early March and found it matches the strain of the virus from Europe.

Between March 1 and March 20, 36 people tested positive for the European strain of SARS-CoV-2 out of 544 people with influenza-like symptoms, the report read.

None of the cases matched the different strain which came from Wuhan.

‘Using genetic sequencing, CDC determined that the sequences of most SARS-CoV-2–positive specimens resembled those circulating in Europe, suggesting probable introductions of SARS-CoV-2 from Europe, from other U.S. locations, and local introductions from within New York,’ the report read.

These findings come despite the virus samples being collected from emergency departments based in New York ZIP codes with high populations of Chinese speakers.

Five of the six EDs – across Manhattan, Queens, Brooklyn and the Bronx – were selected in these areas because of the virus’s known origins in China. 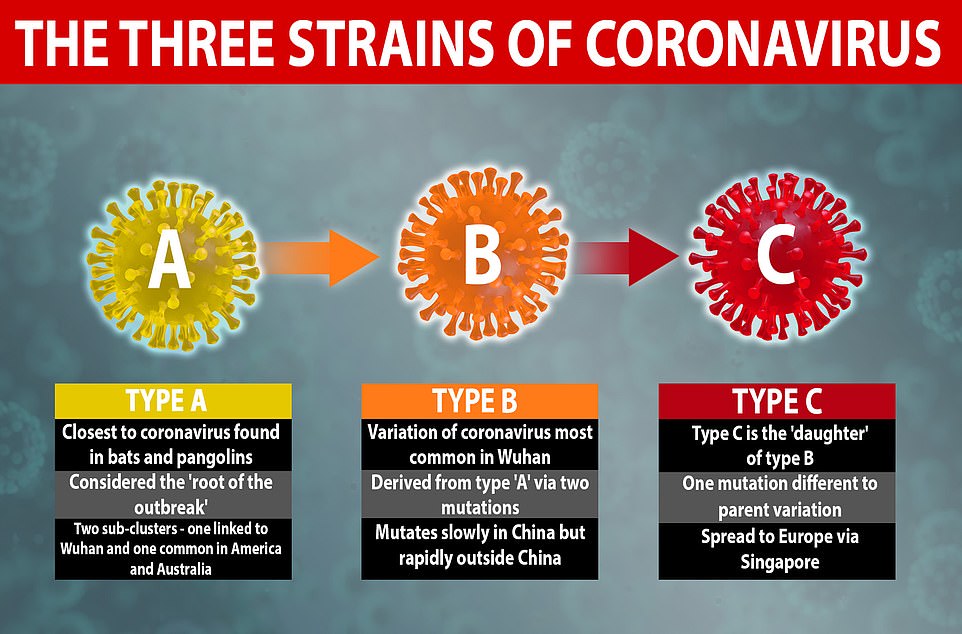 The genetic history of the coronavirus had been mapped by Cambridge University scientists from December 24 to March 4, revealing three distinct, but closely related, variants. Scientists believe the virus may be constantly mutating to overcome differing levels of immune system resistance in different populations 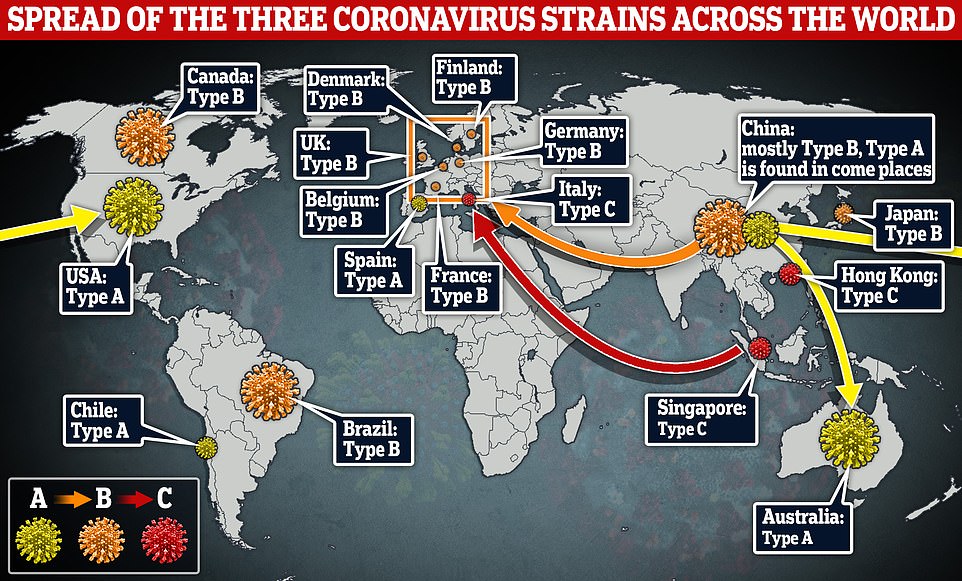 The CDC said the research shows the travel ban failed to prevent widespread community transmission in New York City – which soon became the virus epicenter of the world.

‘Although travel restrictions are an important mitigation strategy, by the time the European restrictions were implemented, importation and community transmission of SARS-CoV-2 had already occurred,’ the report reads.

Trump issued a travel ban on China on February 2 but it was more than a month later on March 13 that he placed restrictions on people coming from Europe.

The research shows cases were already rampant in New York by this time, with an estimated 11.3 percent of New Yorkers already infected in the week starting March 8.

In the week beginning March 1, there were already 26 confirmed cases of the virus, which rose to 1,917 by the week of March 8.

The research shows the reality of the outbreak was far worse, however, with an estimated 15 undetected cases that first week. 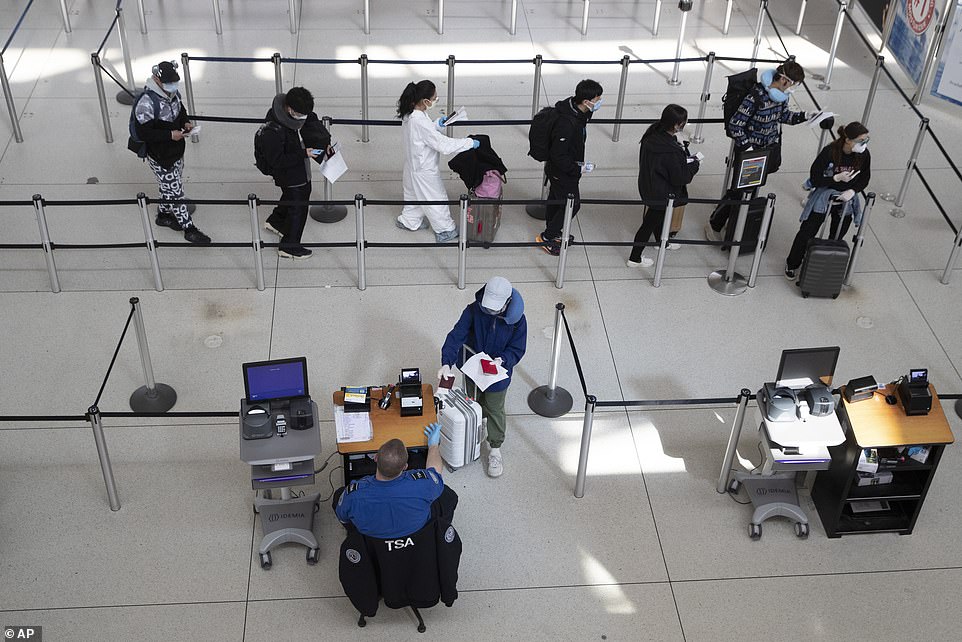 Passengers at JFK airport in New York in March. Trump issued a travel ban on China on February 2 but it was more than a month later on March 13 that he placed restrictions on people coming from Europe 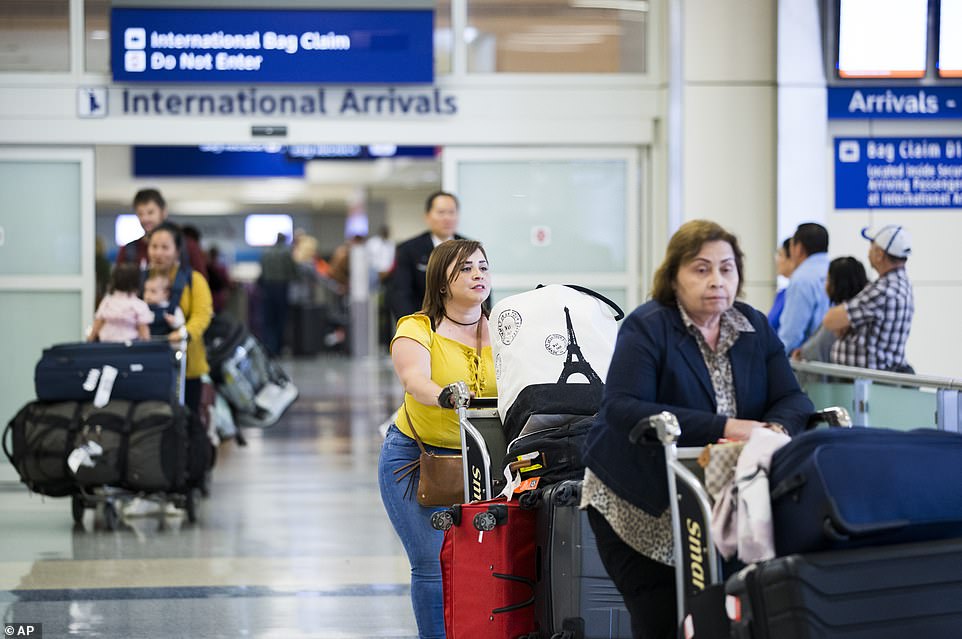 By the next week, undetected cases are estimated to have reached 1,170.

Travel data shows 343,402 arrived into the US from Italy, 418,848 from Spain and about 1.9 million more came from Britain ahead of the Europe flight ban.

The new research marks another blow for Trump after he spent much of the early days branding the infection the ‘China virus’. 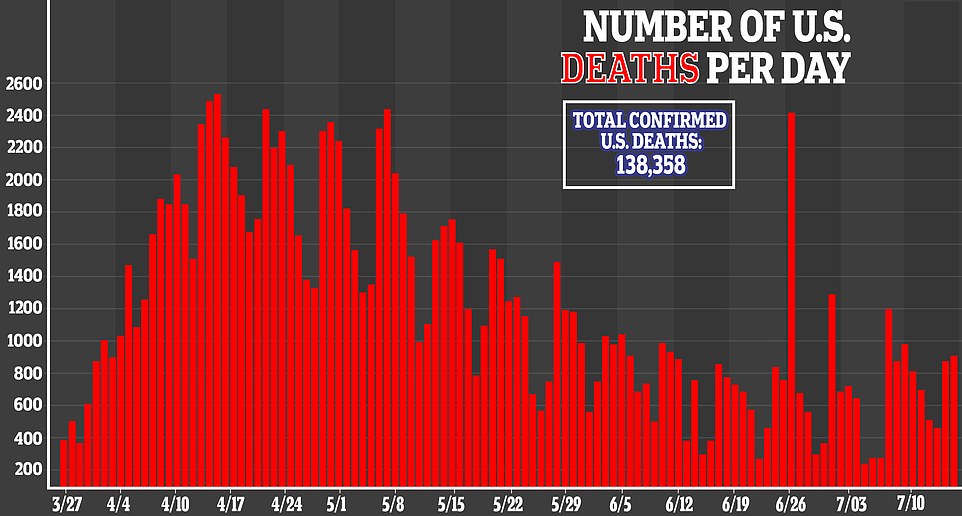 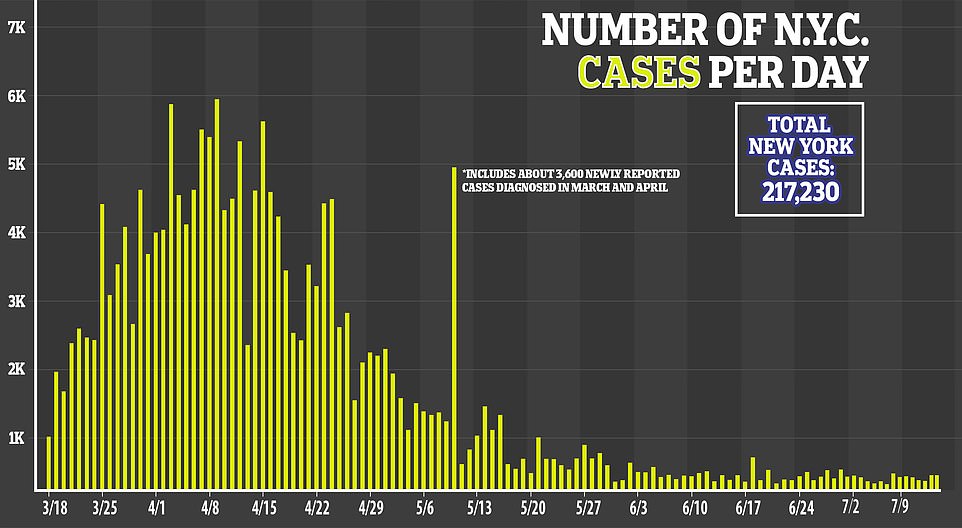 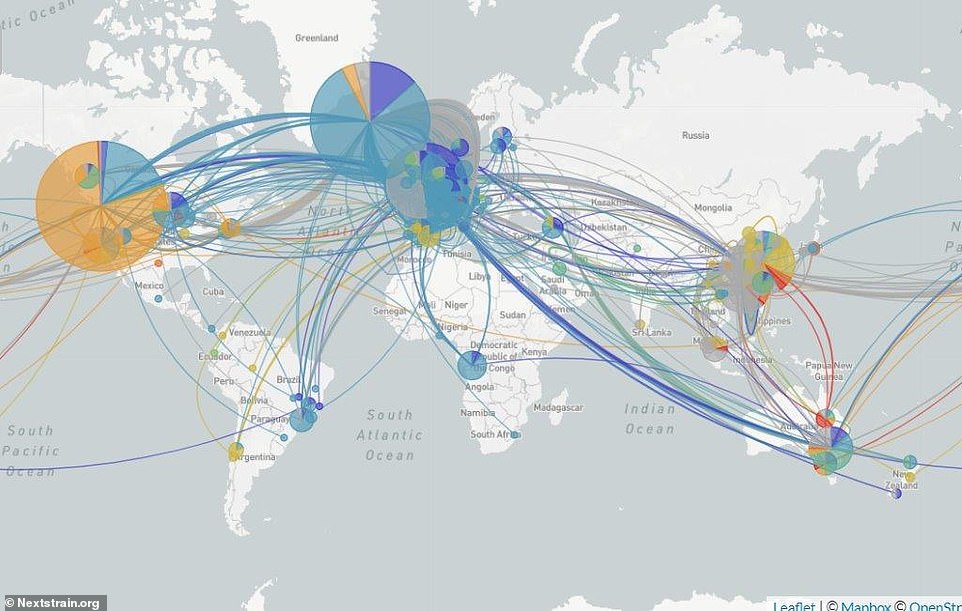 This map shows the trajectory of various strains of the coronavirus as it criss-crosses the globe, according to an ongoing genome analysis by Nextstrain.org 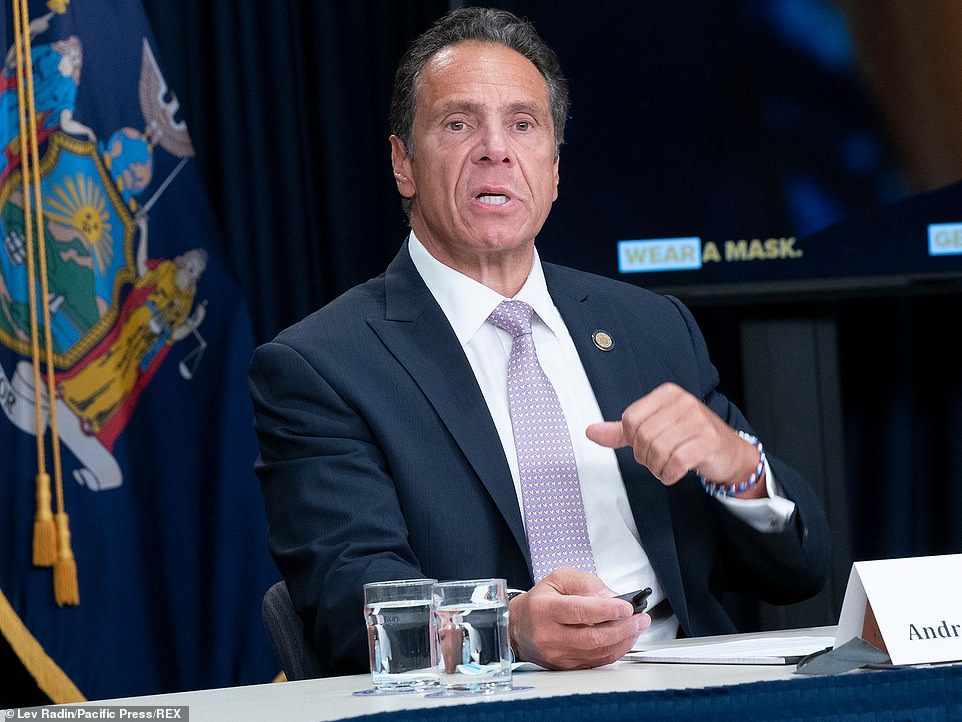 The first cases of coronavirus in New York spread mostly from Europe, according to two scientific studies.

The scientists from the Icahn School of Medicine at Mount Sinai N.Y.U. and Grossman School of Medicine studied DNA from thousands of samples of coronavirus patients and concluded the first travelers to bring the virus to the city came from Europe, not Asia.

But they also found that the strain of the virus that arrived in Washington state came from China.

The report also cast fresh concerns over the role children played in spreading the virus and how effective closing schools was on stopping the outbreak in its tracks.

During the weeks of March 8 and March 15, there was an increase in confirmed cases of COVID-19 among children under 18 years in NYC.

The report also estimates a vast number of COVID-19 cases among young people went undetected, with an estimated 17.7 percent of under 18-year-olds thought to have the virus in the week beginning March 15.

Cuomo told MSNBC Thursday the report was ‘damning’ and leveled blame at Trump’s China and Europe travel bans for failing to slow the spread of the virus.

‘There’s going to be a second failure which is now all this explosion across the rest of the country was totally predictable,’ Cuomo said on MSNBC.

‘We still don’t have the operation set up. We’re going to see that infection come back to New York and reinfect New York unless we’re very lucky.

‘It’s not only the first failure that allowed the virus to come. It’s the second failure that four months later we’re still talking about eight days to get testing results.’

New York – once the virus epicenter of the world – has been driving down cases of the deadly virus.

A total of 385 new cases were confirmed in New York City Thursday and seven deaths – a far cry from the city’s deadliest day in April when more than 800 were killed by the virus.

Several other states that rushed to reopen their economies have seen cases skyrocket to shocking new heights, leading Cuomo to mandate a 14-day quarantine on travelers from many states.

People arriving from 22 states with the highest infection rates are now required to quarantine on arriving into New York and provide details on where they will isolate or face fines of up to $2,000.

Cuomo said compliance with this rule went up to 92 percent after the state announced fines.

On Friday, Cuomo will announce whether or not New York City can enter phase four of reopening.

The governor said Thursday the city is currently on track to move to the final phase Monday, but his administration will review the latest infection data and decide by 4 p.m. Friday.

All other regions of the state have already entered phase four.

However, he warned that even if the region does enter the phase, no ‘additional indoor activity’ will reopen.