CEO of company that owns MoviePass received $7.25M in shares that are now worth just $50

The value of the company that owns MoviePass has nosedived to the point where its CEO, Ted Farnsworth, has seen the value of his stock holdings shrink from $7.25million to just $50.

Last year, Farnsworth was awarded the shares in parent company Helios and Matheson Analytics as part of his compensation package.

The shares in the company represented 80% of his total $8.9million compensation, according to QZ.

In filings to the SEC last week, the package of shares was listed as worth just $50.

Adding insult to injury, Farnsworth would not be able to sell those shares because they are in lock-up.

That precludes Farnsworth from selling or transferring them a period of up to two years after stockholders approved the award.

The value of the company that owns MoviePass has nosedived to the point where its CEO, Ted Farnsworth, has seen the value of his stock holdings shrink from $7.25million to just $50. Farnsworth is seen center alongside two unidentified people in April 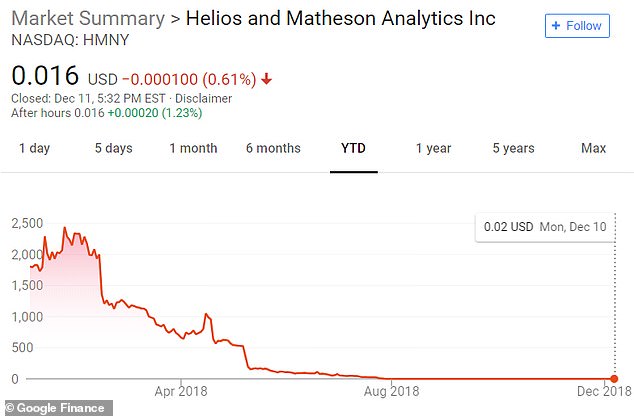 As of Monday, the stock price of Helios and Matheson Analytics was $0.02. At its peak earlier this year, it was hovering near $2,500

He was also awarded 8,213 shares, which have not yet been approved by shareholders.

If granted, those shares would be worth about $135 based on current stock price.

Going forward, Farnsworth’s base salary will be $325,000 a year, and he is eligible for a cash bonus of around 25% of his salary, and stock awards worth 200% of his salary.

If the company’s market capitalization reaches $100 million, which seems like a stretch at this point, Farnsworth would receive a bonus.

As of Tuesday, Helios’ market capitalization was just over $21million.

Farnsworth founded the tech company Zone Technologies, which is known for creating an app that maps crime in neighborhoods.

In 2016, Helios bought the company and brought Farnsworth on board.

In January 2017, he was named CEO of Helios. He then spearheaded the acquisition of a majority stake in MoviePass.

Farnsworth signed a five-year contract with the company just before the MoviePass deal was finalized last December.

In late October, Helios and Matheson Analytics said it will spin off MoviePass into a separate public company.

The data company, which took a controlling stake in MoviePass last December, now owns a 92 percent stake in the business. 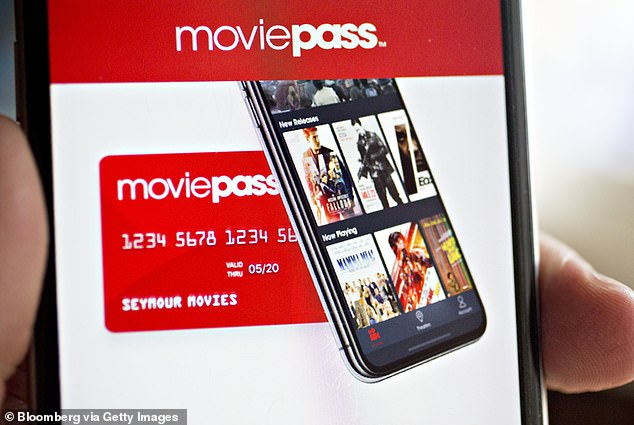 In January 2017, he was named CEO of Helios. He then spearheaded the acquisition of a majority stake in MoviePass

Helios and Matheson said it would create a new unit MoviePass Entertainment Holdings Inc that would take ownership of the shares of MoviePass Inc and other film related assets held by the company.

MoviePass allows subscribers to watch three movies a month for a flat fee of $9.95 and get discounts on additional movie tickets.

The company’s stock has lost nearly all its value this year as it burned through cash to support the MoviePass business.

Helios is headquartered in New York and listed on the Nasdaq Capital Market under the symbol HMNY.