‘I don’t see us, the English teams, dominating’: Liverpool boss Jurgen Klopp warns the threat from Europe has never been greater ahead of Champions League group-stage draw

Jurgen Klopp does not believe Liverpool’s Champions League triumph will kickstart a period of English dominance in the competition and warned the threat from Europe has never been greater.

Liverpool have been finalists in the Champions League for the past two seasons and last season’s all-English final – alongside the Europa League shootout between Chelsea and Arsenal – suggested that Premier League clubs are now leading the way.

But Klopp, who will find out where Liverpool’s defence of the trophy begins on Thursday evening when the draw is made in Monaco, is not buying into the theory that his team – and Manchester City – are the ones to beat in the tournament and fears the road back to Istanbul, where the final is staged next May, will be even more arduous than the one that took them to Kiev and Madrid.

‘I don’t think there was ever a stronger Pot 2. It is just crazy,’ said Klopp, pointing out that both Madrid clubs, Borussia Dortmund, Benfica and Tottenham are some of the clubs outside the first group.

‘They should all be in Pot 1, but there is not enough space there. I don’t think there was ever a stronger Pot 3. Then Pot 4 you can get RB Leipzig – Wow!

‘The groups will be incredible. I have no clue who will win the Champions League. We have the same chance like everyone else, but that is all, and no I don’t see us, the English teams, dominating. 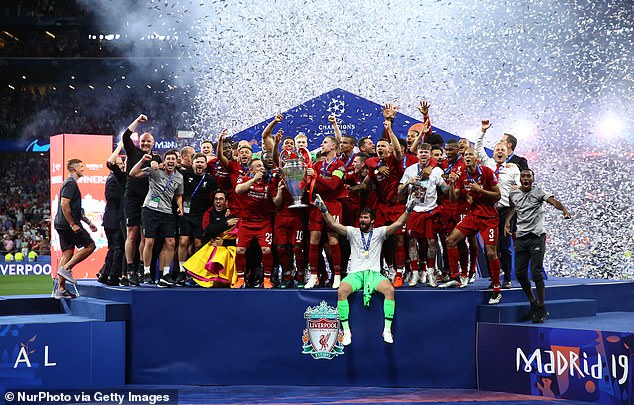 Liverpool have been finalists in Champions League for past two seasons, winning last season

‘Bayern Munich now finally brought in Ivan Perisic and Philippe Coutinho, which is like a big boost.

‘Look at the squad Borussia Dortmund has and tell me we are stronger than them. That is incredible. They can make five changes and you think: “Really? they didn’t play last week? Why?”

‘There are a lot of quality teams – Juventus will be there, PSG will be there. Whatever happens they will find solutions. Real Madrid? Do you think they gave up already.’