‘Girls need to know they can be into sport’: Channel Seven reporter hits out at sexist trolls after she was targeted for liking AFL star Nat Fyfe’s Instagram post

A Channel Seven sport reporter has told online trolls to ‘grow up’ after they made sexist remarks when she showed her support for AFL star Nat Fyfe.

Despite the limited interaction the Fremantle supporter was quickly set upon by vile trolls.

‘Lady wants a Fyfe,’ a man commented before tagging several other friends.

After one of his comments appeared to be removed, the same troll lashed out at the reporter again, describing her as a ‘bitty’, a derogatory term for an obnoxious woman.

‘This bitty deleted my comment,’ he said adding ‘got a blue tick and she tryna censor me.’ 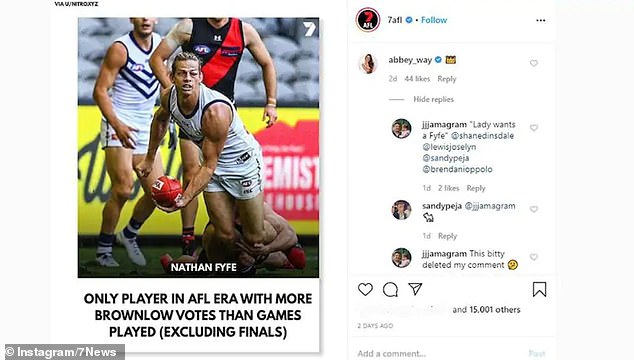 Fed up with the behaviour, Ms Way took to her own Instagram page to call out the sexist comments.

‘I usually leave this but I don’t want a bar of it today,’ she said.

‘”Lady’ is a sports journo at the network that made this post AND a Freo supporter. Grow up.’

Ms Way has since been praised for standing up for herself online and told the Daily Telegraph the behaviour needed to be called out.

‘Sadly you get used to it and I will rarely say anything to be totally honest because you have to pick your battles,’ she said.

‘But when it’s meant to be offensive, I am more than happy to stand up for myself.

‘Girls of every age need to know you can be into sport and admire athletes for their athleticism and that’s all it is.’