Cook County State’s Attorney Kim Foxx has dismissed more than 25,000 felony cases – including many involving charges of murder and other serious crimes – in her first three years on the job, a new report shows.

Foxx gained notoriety last year when she dropped felony charges against Jussie Smollett, the Empire actor accused of staging a racist, homophobic attack on himself in January 2019.

The Chicago Tribune on Monday published an analysis of Foxx’s overall record on dropping charges, revealing that she has done so at a rate that’s 35 percent higher than her predecessor.

In the first three years after Foxx took over as Cook County’s top prosecutor in 2016, her office dismissed all charges against 29.9 percent of felony defendants, the Tribune found.

A total of 25,183 defendants had their felony charges dismissed under Foxx up until November 2019, compared with 18,694 under Alvarez during a similar period, the Tribune said.

Cook County State’s Attorney Kim Foxx has dismissed more than 25,000 felony cases – including many involving charges of murder and other serious crimes – in her first three years on the job, an analysis by the Chicago Tribune has found

Foxx took over as state’s attorney in 2016 with a promise to bring criminal justice reform and to reduce the population of Cook County Jail.

The Democrat is now up for re-election in November after beating three challengers in a tight race that was one of the most expensive of its kind.

Foxx defended her case dismissal record in an interview with the Tribune prior to the publication of its analysis. 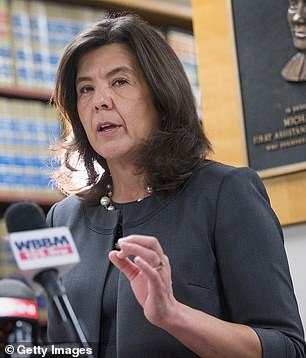 A Tribune analysis found that Foxx has dismissed felony cases at a 35 percent higher rate than her predecessor, Anita Alvarez (pictured in 2015)

The newspaper reported that Foxx did not dispute the findings, but said that the high rate of dismissal gave an ‘incomplete picture of her commitment to keeping the public safe’.

‘It is always eye-opening to be able to look at our own data and compare it to my predecessor’s past,’ Foxx said. ‘I can’t reconcile what her decision-making was, and how they chose to (dismiss) cases in the past.

‘But I will say that this administration has been clear that our focus would be on violent crime and making sure that our resources and attention would go to addressing violent crime.’

Foxx asserted that her office has focused on dropping cases against low-level, nonviolent offenders – though the Tribune’s analysis paints a different picture.

It found that Foxx has consistently dismissed cases involving murder, shootings, sex crimes and serious drug offenses at a significantly higher rate than Alvarez did.

Below is a breakdown of dismissal rates for different felony crimes under Foxx and Alvarez: 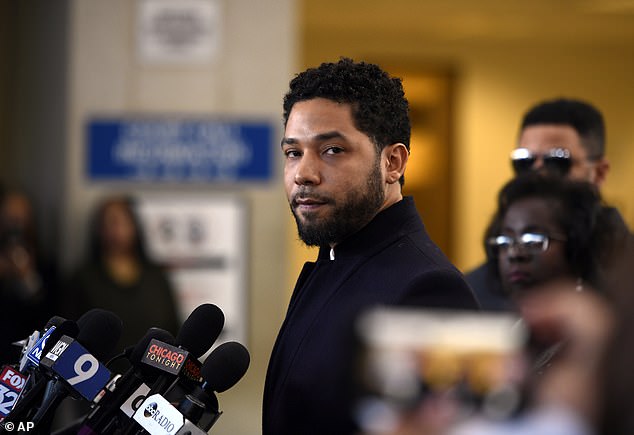 Foxx gained notoriety when she dropped felony charges against Jussie Smollett (pictured), the Empire actor accused of staging a racist, homophobic attack on himself in January 2019 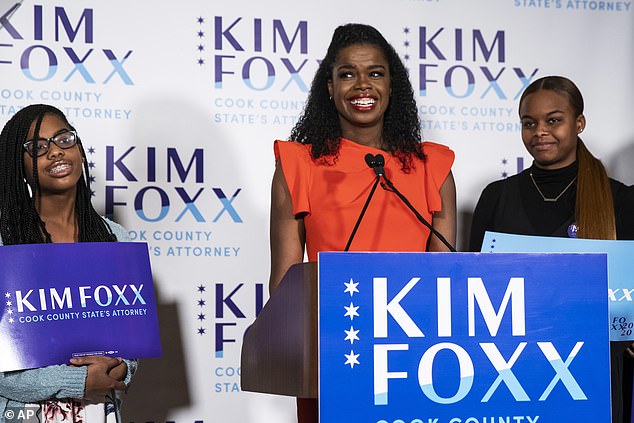 Foxx’s handling of the Smollett case has been a key issue in her campaign for re-election this fall. She is pictured at a rally after winning the Democratic nomination in March

Foxx said she encourages assistant state’s attorneys in her office to openly discuss dismissing felony charges with cases that have legal problems.

She said fostering that kind of environment is important to her given Chicago’s record of wrongful convictions and police misconduct.

‘Recognizing the history that we’ve had around wrongful convictions, recognizing our ethical obligations as prosecutors … requires us to reinforce that people can, if they believe a case is flawed, bring it to our attention, and we will dismiss it if it’s appropriate,’ she said.

Foxx also said she is more selective about prosecuting the strongest, most winnable cases – though the Tribune’s analysis showed that her overall conviction rate (66 percent) is lower than Alvarez’s (75 percent).

Foxx drew intense criticism last year after she recused herself from the Smollett investigation and her office dismissed all 16 felony charges against the actor.

Though Foxx had removed herself from the investigation prior to the charges being dropped, questions remained about whether she acted improperly by speaking to a Smollett relative and aide to former first lady Michelle Obama before the dismissal.

Last summer a Cook County judge appointed a special prosecutor, former US Attorney Dan Webb, to investigate whether any misconduct occurred in Foxx’s office’s handling of the case. 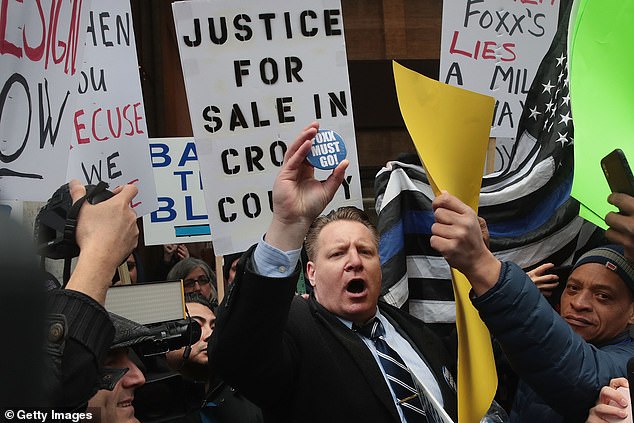 Foxx drew intense criticism last year after she recused herself from the Smollett investigation and her office dismissed all 16 felony charges against the actor. Protesters are seen demanding her removal in Chicago on April 1, 2019

Foxx denounced Webb’s appointment, saying that it was unnecessary to bring in a special prosecutor when the county’s inspector general was already looking into the case.

But Webb’s investigation proved very influential as it led to a grand jury indicting Smollett on new charges in February. Those charges, which were ridiculed by Foxx, are nearly identical to the ones her office dismissed.

Webb said that the decision to drop charges was unjustified in part because the evidence against Smollett seemed overwhelming and because he was not required to admit that the attack was a hoax.

The new charges threatened to bring down Foxx’s campaign for re-election as her opponents repeatedly used her perceived mistake as ammunition.

But Foxx overcame the opposition and won the Democratic nomination in March.

‘There was an effort to make this election about one big case involving a celebrity,’ she said in her victory speech. ‘The voters have overwhelmingly put that fallacy to rest.’

Webb’s determination on whether Foxx’s office engaged in misconduct in the Smollett case has yet to be released.

If it comes before the November election and contains damaging conclusions, Foxx could be facing another hard battle to keep her position.

Chicago Tribune’s analysis of Foxx’s record on dismissing felony charges did not include information about individual cases, however many examples have been covered in the media over the course of her time in office.

Below are descriptions of two of the defendants Foxx declined to prosecute.

Dnigma Howard was arrested and charged with two felony counts of aggravated battery in January 2019 after an incident at Marshall High School in Chicago.

Police accused Howard, then 16, of kicking, biting and spitting on two officers at the school who were trying to remove her from campus because she had been suspended.

A video of Howard’s altercation with the officers showed them tasering her and dragging her down a stairway after they wrestled to her floor.

The video went viral, sparking outrage from viewers who were horrified to see the officers use such intense force on a teenager.

Foxx’s office ultimately decided to drop the felony charges against Howard a month after her arrest – eliciting outrage from local police unions.

Ariel Roman was shot and injured by a Chicago police officer who tried to arrest him for jumping between train cars on February 28, 2020.

Roman was subsequently hit with charges for resisting arrest and narcotics after widely-shared bystander video showed him refusing to let police handcuff him before they opened fire.

After the video went viral Interim Police Superintendent Charlie Beck said he asked Foxx’s office to drop the charges, which were initiated by police.

‘Given the totality of circumstances and the department’s significant level of concern around this incident, it would be insensitive to advocate for these charges,’ police spokesman Anthony Guglielmi said.

‘While we will not rush to judgment, the level of concern over the tactics used in this incident is significant.’