By Jim Norton Technology Editor For The Daily Mail

One adult website told the watchdog it had considered using age verification tools – but decided against as it would hit their bottom line too much.

A third of young men and one in six young women had viewed pornography by the age of 13, troubling new data has revealed.

A major survey found half of the 72 per cent of men aged between 18 and 29 who have seen online pornography were exposed to it before they were teenagers.

‘It also interferes with working memory and concentration, which is obviously going to really impact children in school.’

A report published today however has found the UK’s largest video-sharing site for adult content, OnlyFans, was the only one to have adopted such checks.

Many of its smaller rivals still allow users to access adult material simply by self-declaring they are over 18 – often by just ticking a pop-up box or by putting in a date of birth.

Ofcom said it did not consider such measures to be appropriate age checks, adding it was clear the platforms were not ‘sufficiently equipped, prepared and resourced for regulation’.

While some asked for a payment card to access the content, Ofcom said this was not enough to ensure the customer was old enough as some could be held by under-18s.

Over the next year, Ofcom said adult sites ‘must have in place a clear roadmap to implementing robust age verification measures’ ahead of the Online Safety Bill.

The legislation will give Ofcom the power to hand out hefty fines of up to ten per cent annual turnover – or even block sites from being used in the UK.

Only adult websites that have user-generated content will be included under the Bill however, with critics warning companies could get around the rules by removing any material uploaded by users. 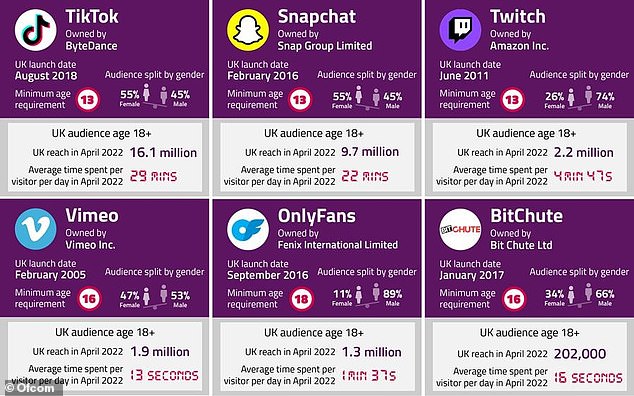 The company claims the technology can guess whether users between 13 and 19-year-olds are under the age of 23 with over 99 per cent accuracy.

If a user fails this test, they go have to verify their age using ID such as a passport through. Anyone who refuses cannot set up an account.

Dame Melanie Dawes, Ofcom’s Chief Executive, said: ‘Today’s report is a world first. We’ve used our powers to lift the lid on what UK video sites are doing to look after the people who use them.

‘It shows that regulation can make a difference, as some companies have responded by introducing new safety measures, including age verification and parental controls.

‘But we’ve also exposed the gaps across the industry, and we now know just how much they need to do.

‘It’s deeply concerning to see yet more examples of platforms putting profits before child safety. We have put UK adult sites on notice to set out what they will do to prevent children accessing them.’

There are ten digital STIs that can harm your device when you’re looking at adult content, according to computer security firm Kaspersky Lab.

1. Trojans – They might masquerade as innocent programs, but they carry a harmful payload.

2. Drive-by downloads – Cybercriminals look for insecure web sites and plant a malicious script into the code on the pages. These take advantage of any unpatched applications on your computer and infect them automatically

3. Click-jacking – Click-jacking involves tricking someone into clicking on one object on a web page while they think they are clicking on another. Clickjacking can be used to install malware, gain access to a victim’s online accounts or to enable their webcam.

4. Tinder bots – These are automatic programs designed to masquerade as real people on a dating site to lure users into clicking on them, with the aim of tricking the victim into disclosing confidential data.

5. Cat-Phishing – This is when cybercriminals pose on dating sites or chat rooms, encouraging people to click on links for live sex chat or adult images.

7. Worm – This is a program that replicates, but does not write its code to other files: instead, it installs itself once on a victim’s device and then looks for a way to spread to other devices.

8. Pornware – This could be a legitimate program, but might be adware installed by another malicious program, designed to deliver inappropriate content to the victim’s device.

9. Spyware – Software that enables an attacker to secretly obtain information about the victim’s online activities and transmit it covertly from their device.