Derek Potter has been jailed for 17 years

A man who killed his wife and attempted to pass her death off as a suicide was only caught out when he confessed his horrific crime to a woman in the pub.

Derek Potter, 64, murdered his wife of 26 years Lesley, 66, before dialling 999 and telling police and paramedics he’d tried to save her after returning from an errand in the village.

Potter told them he had cut her down, and he nearly got away with it after police bungled the investigation, the court heard.

Mrs Potter’s death was not treated as suspicious and her body was prepared for a funeral.

But on April 25 Potter told his colleague Natalia Mikhailoea-Kisselevskaia that his wife had been ‘doing his head in’ and he had strangled her.

She went to police and on April 28 – less than two weeks before the planned funeral – Mrs Potter’s body was taken from a chapel of rest back to hospital for a detailed post-mortem.

It revealed she had suffered 30 rib fractures as well as internal bruising in her stomach and inside her neck, in addition to more than 30 bruises over her neck, face, arms, back, legs and feet.

Potter denied murder and claimed his wife killed herself or could have died while choking herself for sexual pleasure, and also tried blaming his son-in-law and Miss Mikhailoea-Kisselevskaia.

Mrs Potter’s daughter said the day of her mother’s death was one of the ‘hardest days of her life’, as she had to tell her children their grandmother had taken her own life.

But weeks later, she had to tell them their grandmother had in fact been killed by the man they regarded as their grandfather.

Mrs Potter’s other daughter, who was four months pregnant when she died, said she ‘never thought her mother could take her own life.’ 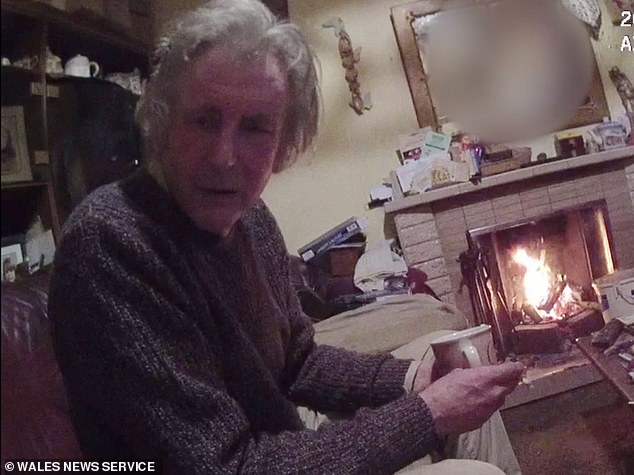 He would have got away with killing wife Lesley, 66, but only days before his wife’s body was due to be cremated Potter told a woman in a pub that he was responsible. He is pictured here being interviewed by police after his wife had died 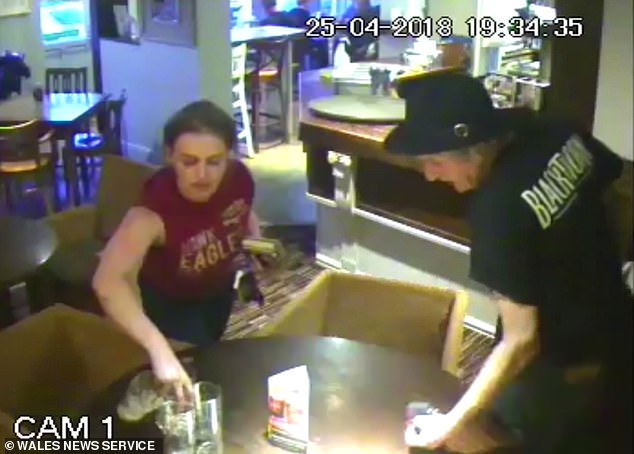 Potter’s murder trial heard he had confessed on April 25 to colleague Natalia Mikhailoea-Kisselevskaia (pictured here together in the pub), that he had strangled his wife

Police ‘made mistakes’ as victim’s death was dismissed as suicide

South Wales Police made ‘mistakes’ in the initial investigation into Lesley Potter’s death, meaning her husband nearly got away with murder, the court heard.

Paul Hobson, prosecuting, told Swansea Crown Court during Potter’s sentencing hearing for murder that the police response on the day of Mrs Potter’s death ‘was not as it should have been’ and the force was ‘looking at this very seriously’.

Mr Hobson told Mr Justice Soole: ‘It is plain, on the day of Lesley Potter’s death the police response was not as it should have been and mistakes were made, either of common sense or procedure or of both.

‘We know scenes of crimes (officers) attended and took photographs but there was no wider inquiry than that. There was no action by CID and the force medical examiner.

‘What happened in this case is something they have been looking at very seriously with a view to making improvements in regard to sudden deaths.

‘Lesley Potter’s family were told one thing, then another thing some time later. No family should have to deal with that.’

In a statement, South Wales Police said: ‘Now that the criminal proceedings are concluded we will consider the comments made and review the initial police response to this tragic death.’

Jailing Potter for life, Judge Mr Justice Soole told him he would serve at least 17 years for the ‘ferocious attack’, saying he was sure that in the moment he strangled his wife he intended to kill her.

A Home Office pathologist concluded ‘manual strangulation’ had played a part in her death.

Potter told the jury he had strangled his wife 15 times, both during sex and while angry – almost killing her once.

He also said he believed he had ‘some sort of power’ in his hands.

Carpenter and ex-cafe boss Potter denied murdering his wife at their home in Hill Street, Mumbles, on April 7 this year but was found guilty following a trial at Swansea Crown Court.

A jury took one hour and seven minutes to unanimously convict Potter of murder.

‘It is a side to him that is some type of benign fantastist, and he has a tendency to say things that are superficially shocking,’ he added.

Jailing him for life with a minimum of 17 years, Mr Justice Soole said Potter had strangled his wife ‘without premeditation, in a sudden and furious burst of temper.’

He added: ‘You treated and exposed Lesley Potter’s naked body to that terrible indignity and dishonour.

‘I am sure that, in the moment of your sudden furious attack, you intended to kill.

‘As your own evidence chillingly explained, you had a very clear understanding of the difference between the use of the hands as a temporary restraint and their use to kill by strangulation.

‘You knew what you were doing. You acted as you did in a sudden, independent and terrible moment of hostile fury.’ 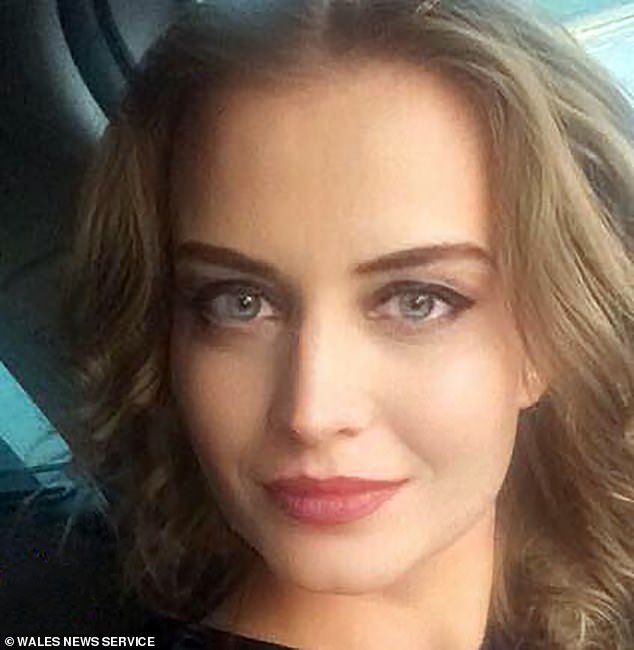 Potter told his colleague Natalia Mikhailoea-Kisselevskaia that this wife had been ‘doing his head in’ and he had strangled her. 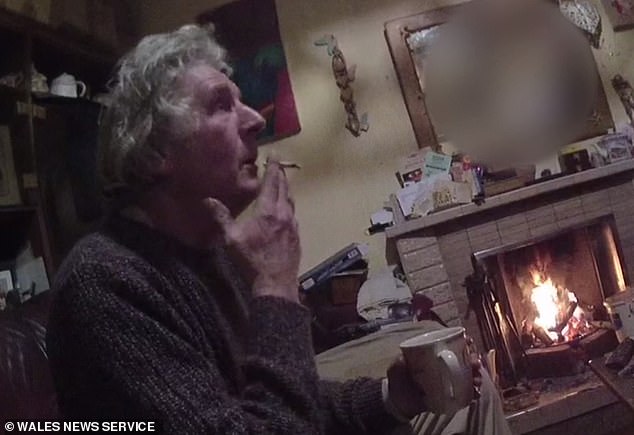 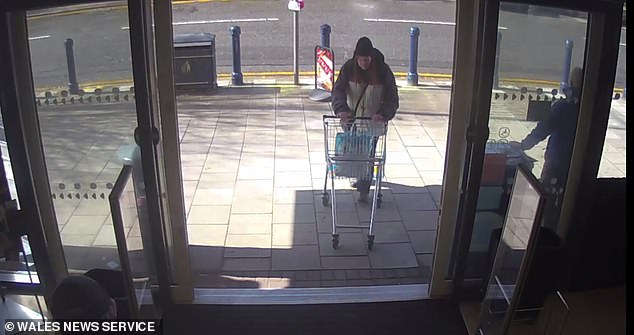 CCTV footage of Lesley Potter shopping before she was murdered

The sentencing hearing also heard moving statements from Mrs Potter’s children, who described their mother as ‘kind and loving’.

Victoria Bull, Mrs Potter’s daughter from her first marriage, said: ‘My mother was cruelly, violently and deceitfully taken from me and my family in the most unimaginable way.

‘On that day, my family’s lives changed forever and our whole lives will never be the same again.

‘The last seven months have been a living nightmare and the psychological impact upon our lives is too great to put into words.

‘I am numb, still in shock, and not able to grieve the loss of my mother.’

‘As a parent, you do everything you can to protect your children – but I could not protect them from this,’ she said.

Ms Bull said her family was preparing for the funeral when the police informed her that Potter had been arrested on suspicion of murder.

‘I cannot describe to you how I felt,’ she said.

‘My heart was breaking… the thought of knowing how frightened she must have been, knowing that the man she lived with for many years was killing her, the hurt and anguish she must have felt knowing there was nobody in the house to protect her.’

She added: ‘My first and last thought each day are of my mum.’

Ms Bull also criticised Potter for telling lies to cover up his crime.

‘I feel like my mum’s memory has been tarnished with the untrue things said about her in court,’ she said.

‘Mum is not here to give here side of the story. How could he carry out such a crime towards the person he was supposed to love?’

Her brother, Adrian Bull, said his mother’s death had a ‘massive impact’ upon his family.

He said: ‘She will never get to see her grandchildren grow up, and I will miss my mum for the rest of my life – and knowing I could not protect her is hard to live with.’ 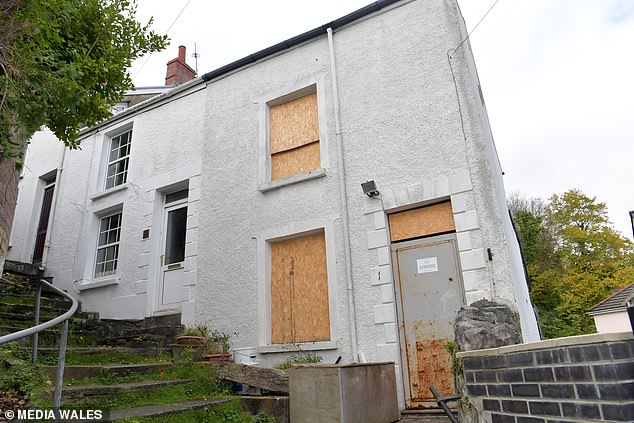 Nicole Njegovan, Mrs Potter’s daughter from her marriage to Potter, said she never thought her mother could take her own life.

‘I was four months’ pregnant at the time and I don’t know how she could leave me,’ Mrs Njegovan said.

‘I knew something was not right. My mum would not have done that to herself as she had so much to live for and was looking forward to the birth of my second child.’

She said she found it very hard to come to terms with her father murdering her mother.

‘I will forever grieve for her. My mum was my best friend and she has been cruelly and terribly taken from us,’ she added.

‘All I want to do is ring her, give her a cuddle and a kiss. My children are the only thing that are keeping me going. I have to stay strong for them.

‘Our mum was very loving and caring mother and a wonderful grandma. Sadly she was not here to see the birth of her sixth grandchild in September, as her life had been violently taken away from her.

‘She was known by many in the village and will be sorely missed.

‘We have not yet been able to properly grieve for the cruel, violent and untimely death of our mother. Hopefully with the guilty verdict and today’s sentence we will now be able to do so.’

Senior investigating officer Detective Chief Inspector Darren George, from South Wales Police’s Major Crime Team, said following the hearing: ‘Derek Potter went to great lengths to try and disguise his horrific and callous crime – he remained confident up to his conviction that he could evade justice.

‘I am extremely grateful to the witnesses in this case, whose compelling evidence helped the jury to see through Potter’s persistent and devious lies, which he has maintained throughout and during his trial.’