China nixes US warship port visit, recalls admiral from US

China has denied a request for a U.S. warship to visit Hong Kong, the U.S. consulate in the Chinese city said on Tuesday, and scrapped plans for a top admiral to meet with his US counterpart in Washington, officials said.

The moves come as trade tensions soar between Beijing and Washington, which this week enacted new tariffs against China covering another $200 billion of its imports.

The USS Wasp, an amphibious assault ship, had been due to make a port call in the former British colony of Hong Kong in October, diplomatic sources said.

Access denied: China has denied a request for USS Wasp  to visit Hong Kong next month, the U.S. consulate in the Chinese city said

‘The Chinese government did not approve a request for a US port visit to Hong Kong by the USS Wasp,’ Pentagon spokesman Lieutenant Colonel David Eastburn said.

‘We have a long track record of successful port visits to Hong Kong, and we expect that will continue.’

China’s decision comes after Beijing recalled a top admiral who was visiting the US.

Following the event, he was planning a visit to Washington that would have included meetings at the Pentagon with his US counterpart, Chief of Naval Operations Admiral John Richardson.

‘We were informed that Vice Admiral Shen Jinlong has been recalled to China and won’t conduct a visit with Admiral Richardson,’ Eastburn said. 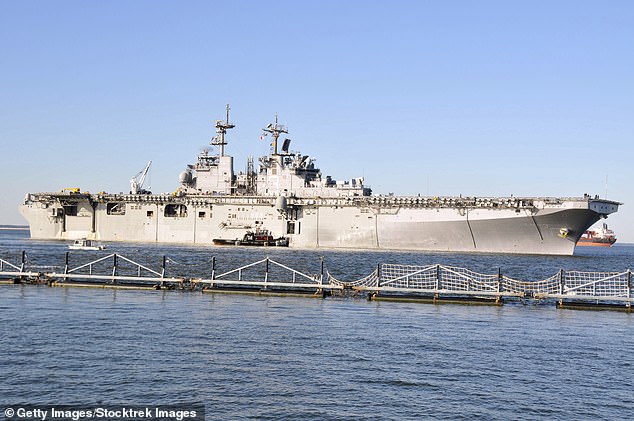 The denied entry of USS Wasp comes amid rising tension between Beijing and Washington over trade and a U.S. decision to sanction the Asian nation’s military

Beijing responded by summoning the US ambassador to China, Terry Branstad, to lodge an official protest, while the Chinese military expressed ‘strong indignation and resolute opposition’ to the sanctions.

United in their resentment of America’s global influence, China and Russia have sought in recent years to tighten up their ties and this month conducted weeklong joint military drills in Moscow’s largest ever war games.

Further inflaming tensions, the US State Department said Monday it was set to approve a $330 million sale of military aviation parts to the self-governing island of Taiwan.

Beijing sees Taiwan as part of its territory awaiting unification, and is deeply suspicious of the island’s relations with the US.

China expressed ‘strong dissatisfaction’ on Tuesday over the planned sale and urged Washington scrap the contract.

Beijing has been incensed by recent warming ties between Washington and Taipei, including the State Department’s approval of a preliminary license to sell submarine technology to the island.