A serial killer dubbed ‘China’s Jack the Ripper’ has been sentenced to death for the rape and murder of 11 women and girls including an eight-year-old.

Gao was compared to Victorian era murderer Jack the Ripper because of the way his victims’ corpses were found mutilated, often with their breasts, reproductive organs, ears and hands cut off.

Death sentence: Gao Chengyong, 54, was compared to Jack the Ripper due the way his victims’ corpses were found mutilated, often with breasts and reproductive organs removed

He killed his first victim, a 23-year-old woman, during a home invasion in his native city of Baiyin in north-western China’s Gansu Province, in 1988.

Chinese media reported that, when his arrest finally ended the 28-year shadow looming over the city of Baiyin, local residents celebrated with fireworks.

Gao, a shopkeeper, confessed to all the killings and is said to have remembered in detail the precise time and place each one was carried out.

His youngest victim was an eight-year-old girl who he followed home, before raping and strangling her. 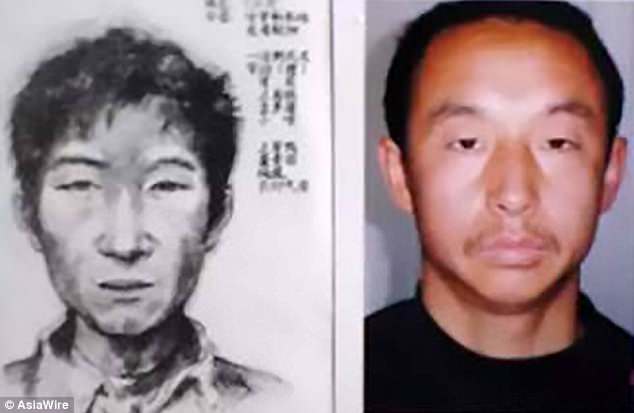 Close match: Gao is compared to one of the suspect sketches made during the 14-year hunt for him in Baiyin in north-western China’s Gansu Province

Gao left the dead girl in her bedroom closet, where she was found by her mother.

Gao, who was rumoured to have targeted ‘long-haired females dressed in red’, reportedly showed no remorse when investigators interrogated him following his arrest in 2016.

His ‘only emotional moment’ was when he asked: ‘Will my case affect my children?’

He has two sons and had been married 30 years upon his arrest.