Chinese national is NOT guilty of trespassing at Mar-a-Lago, faces 1 year in jail for resisting cop

A Chinese national was acquitted of trespassing on US President Donald Trump’s Mar-a-Lago resort in December, by a jury in West Palm Beach, Florida, on Wednesday.

However, the panel did find Lu Jing, 56, was guilty of resisting a police officer without violence.

The woman now faces up to 1 year in jail on the misdemeanor charge.

Chinese national Lu Jing, 56, was acquitted of trespassing on US President Donald Trump’s Mar-a-Lago resort in December, by a jury in Palm Beach, Florida, on Wednesday 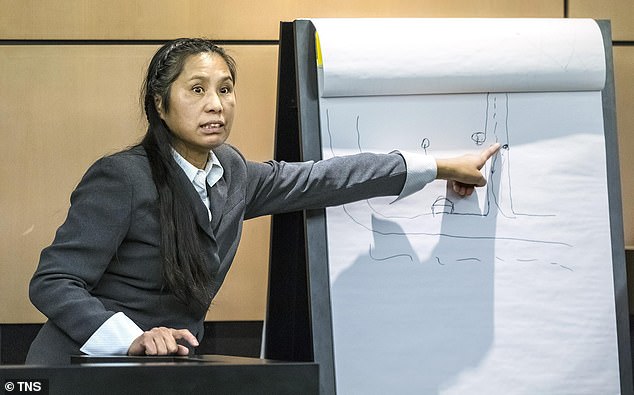 Jing Lu is pictured during jury selection in her trial 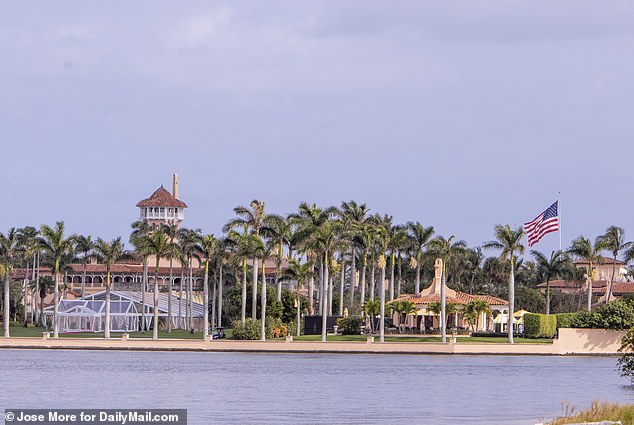 Chinese national Lu Jing, 56, was still found guilty of resisting a police officer without violence when she was caught trying to get into President Donald Trum’s Mar-a-Lago resort in Palm Beach, Florida

She is to be sentenced on Friday, reports the South Florida Sun-Sentinel.

The one-day trial ended after the jury rejected the prosecution’s argument that Jing purposely intruded on the president’s private club in a ‘calculated’ and planned manner, the Sun-Sentinel reports.

Assistant State Attorneys Joseph Kadis and Alexandra Dorman had no theories about the actual purpose of the woman’s visit, but they argued her story that she was just a tourist was bogus.

Prosecutors charged that Jing ignored a warning to leave the resort’s grounds, and that she had entered a second time through a service entrance where she she took pictures of the walls, reports the Sun-Sentinel.

Jing, who spoke through Mandarin interpreter, said it cost her $200 for a Chinese guide to drop her off at various Florida spots, starting in Miami.

The woman said the language barrier prevented her from understanding a Mar-a-Lago security officer’s orders to leave or face ‘a world of trouble.’

She also told the jury that she was scared when two Palm Beach Police officers confronted her, and did not understand why she was being handcuffed.

‘It was a normal reaction,’ she said, through a translator. ‘I didn’t know why they wanted to arrest me.’

Jing has been in custody since the December incident after a judge ordered her to remain behind bars because she’s in the US on an expired visa and has a federal immigration hold, which means she is subject to deportation.

Palm Beach police say Jing was confronted by the private club’s security officers at the club’s main entrance and told to leave, but she returned to take photos by walking down to a service gate.

During opening statements, prosecutors said Jing understood when security asked her to leave.

But her defense team claimed that she didn’t understand and made an honest mistake, the station reported. 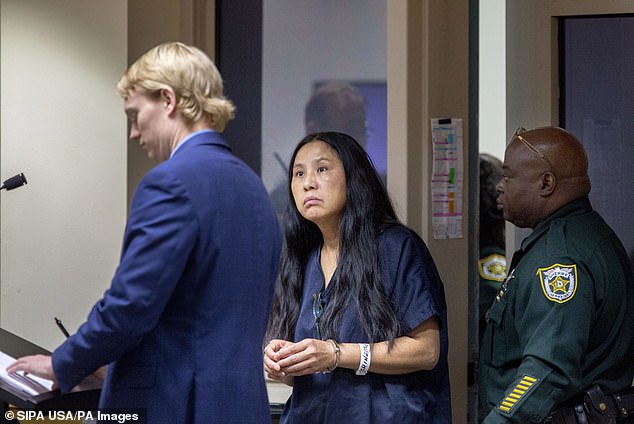 Chinese national Jing Lu is pictured during first appearance in court in West Palm Beach, Florida on December 19, 2019, after she was charged with trespassing at Mar-a-Lago 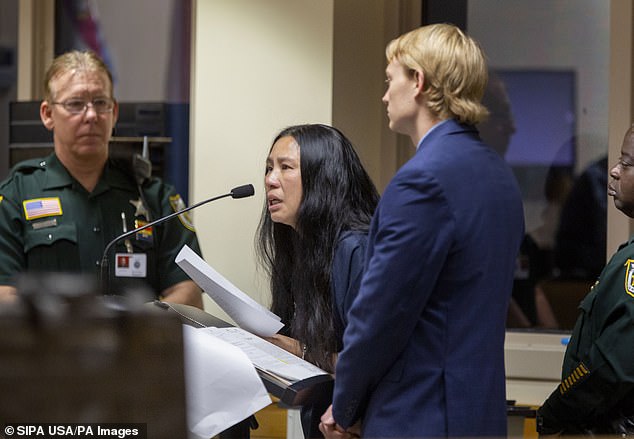 Chinese national Jing Lu addresses the court during first appearance in court in West Palm Beach, Florida, after she was charged with trespassing at Mar-a-Lago

According to a police affidavit, when security personnel approached, Jing fled on foot and was eventually apprehended in the high-end Worth Avenue shopping district in Palm Beach.

When officers approached her, Jing ‘balled up her hands into fists, crossed her arms on her chest, began screaming ‘no, no, no’ and pulling away from me,’ one officer wrote in the affidavit.

After that, Jing was handcuffed and taken into custody. The affidavit says Jing refused to let investigators view the photos on her cellphone and asked immediately for a lawyer, cutting off further questioning.

Jing’s incident was the second time in 2019 alone that a Chinese national was arrested at Trump’s lavish Mar-a-Lago estate.

The White House and Mar-a-Lago have not commented on the incident.

China’s Foreign Ministry spokesman Geng Shuang said he was not familiar with the Lu case.

‘What I can tell you is that the Chinese government always requires that Chinese nationals overseas abide by local laws and regulations and not engage in any kind of illegal activities,’ he told reporters. 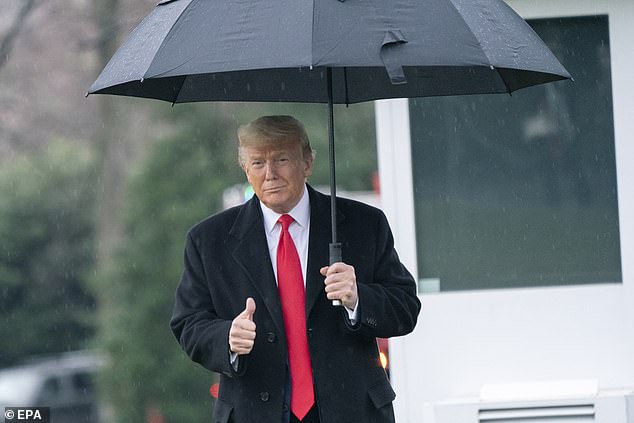 US President Donald J. Trump departs the White House earlier this week, headed for a political rally in Manchester, New Hampshire. The Trump administration and the president’s Mar-a-Lago resort have not commented on Chinese national Jing Lu’s trespassing charge

Trump was not at his Palm Beach property at the time of the trespassing incident. He spent the day in Washington, DC, then spoke in Battle Creek, Michigan, at a rally in the evening.

Zhang, a businesswoman from Shanghai, gained access to Mar-a-Lago after she was mistaken for a member’s relative and was carrying a laptop, phones and other electronics. 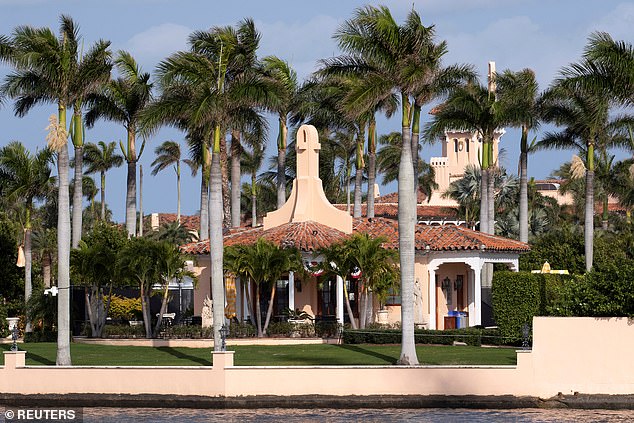 Pictured, President Trump’s Mar-a-Lago resort where Chinese national Lu Jing, 56, was caught trespassing in December. She awaits sentencing Friday on a charge of resisting an officer without violence

It sparked initial speculation that she might have been a spy.

Initially, Secret Service members said she was carrying a thumb drive loaded with ‘malicious malware,’ but in the end she did not face espionage-related charges.

Text messages exchanged with a trip organizer indicated she was a fan of Trump and wanted to meet him or his family to discuss potential deals.

In September, Zhang was convicted of entering a restricted area and lying to a federal agent. She is currently awaiting deportation.

And just last month, Connecticut opera singer, Hannah Roemhild, 30, was arrested following a police-involved shooting after she crashed her SUV through two security checkpoints near Mar-a-Lago.

Roemhild was taken into custody after the incident in Palm Beach, Florida, just hours before the President was due to arrive.

Police say the incident unfolded after they responded to reports of a white woman acting irrationally and dancing on the top of a car in the parking lot of a motel near Mar-a-Lago.

When an officer arrived at the parking lot, Roemhild – who police say was impaired – got off the top of the car and into her black SUV.

Authorities say they approached her as she sat inside the SUV but she would not respond when they tapped on the window.

Officers smashed through the window glass when they saw her rifling through her glove box.

Roemhild sped off and led officers on a high-speed pursuit, at times driving on the wrong side of the road at speeds nearing 70 mph.

She crashed through two security checkpoints before authorities caught up to her and opened fire.

Roemhild was speeding toward a third when sheriff;s deputies and Secret Service agents fired numerous rounds at her car.

She kept driving and investigators believe she picked up a female relative before authorities located her car using a license plate reader.

She ran from her car outside a nearby motel and was tackled by a trooper.