Chinese teacher slaps student because she had a bad grade

This is the shocking moment a school girl in north-west China is slapped repeatedly for her poor performance in a test.

The class teacher, being awarded as an exemplary teacher, was accused of speaking foul languages in the class as she brutally hit the girl in the face.

The video clip was shared among closed online messaging groups and alerted local education bureau to launch an investigation. The teacher is suspended until further notice.

Ms Du, left, is scolding at a student in front the class in Dingbian No.3 Secondary School, China

The 25-second footage has been circulating online since March 21, showing a school girl being scolded by a teacher in front of the class.

She was slapped five times in the face and did not retaliate.

It was believed that the girl did not sustain any serious injuries.

The incident took place in Dingbian No. 3 High School, in Yulin of Shaanxi Province, a report confirmed.

According to an investigation led by the local county education bureau, the teacher, surnamed Du, has 18 years of teaching experience. She received the highest award by the education authority as an exemplary teacher in 2000.

She explained the incident happened in last December when she was giving out test results to the class.

She claimed she got angry due to the student’s performance drastic drop in performance, stated Huashang Daily. 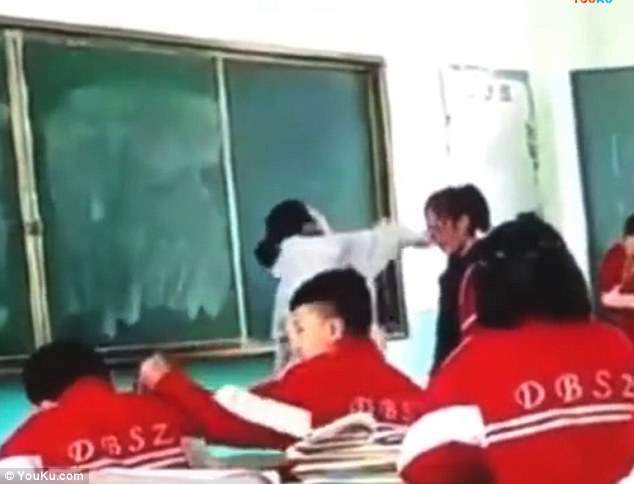 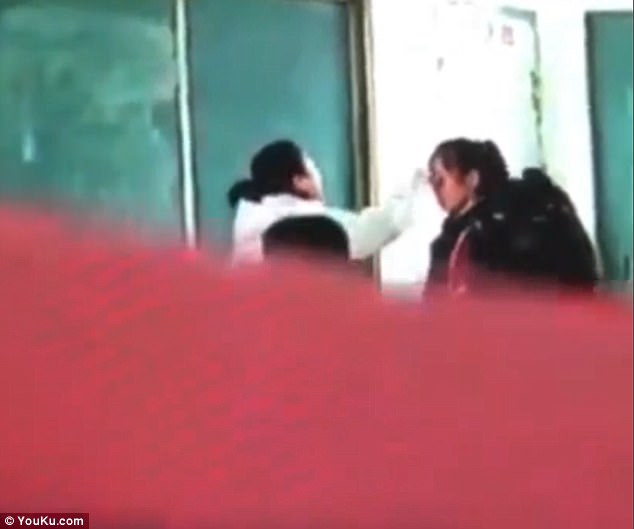 Ms Du was angry because her student’s performance dropped ‘drastically’, according to report

Dingbian education bureau and the school decided to suspend the teacher for the disciplinary misconduct.

Ms Du is not allowed to be assessed for promotion in the next three years.

The school sent Ms Du and three representatives apologised  in a home visit to the girl and her parents on March 23.

The family accepted and agreed to settle the dispute.