Chris Brown has been photographed seemingly choking a female companion during what the star claims was a lighthearted moment of horseplay.

In the ominous photos taken in Miami on Monday morning the R&B singer is seen with his hands around a woman’s neck as another guest appears to try and intervene.

The woman looks distressed in several of the images but later smiles as Brown, 28, releases his grip. 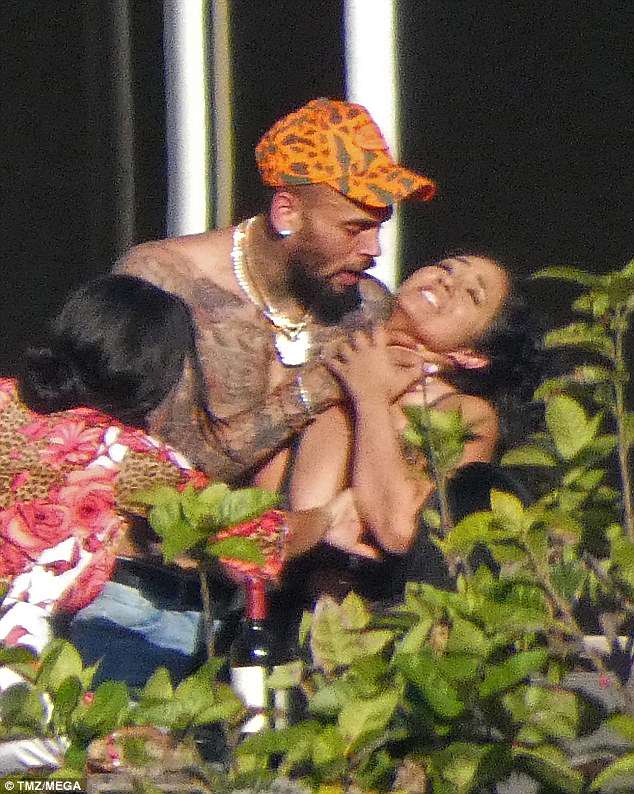 Just a bit of fun? Chris Brown is seen on Monday with his hands wrapped around a woman’s neck during what he claims was a moment of horseplay 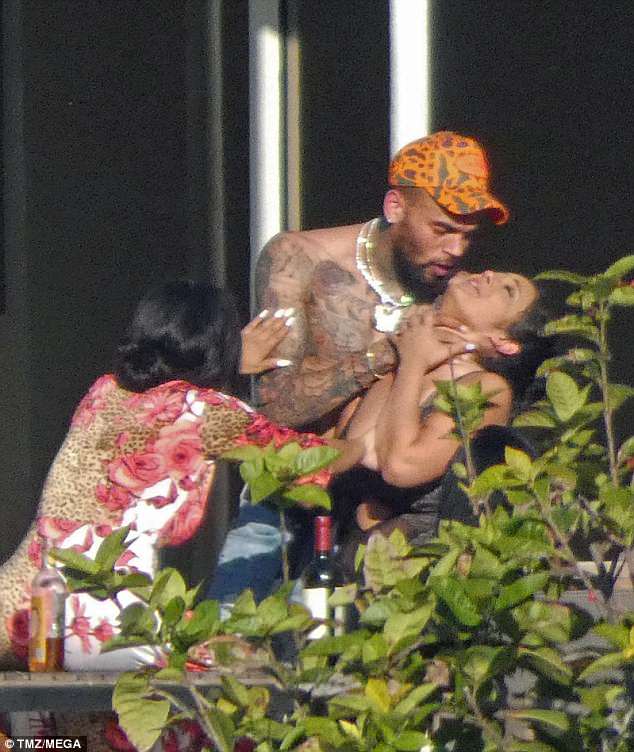 Worrying: The woman appears to be distressed as the 28-year-old R&B star pulls her head back with his hand on her throat

According to TMZ, both Brown and the woman have insisted it was just a bit of fun.

The star and a group of friends were reportedly staying at a rented home during the Ultra electronic music festival in the city.

The singer’s lawyer Mark Geragos, told TMZ: ‘She’s a friend. It’s obviously playful as she confirmed. Whoever invaded their privacy will be held accountable.’

Brown is seen shirtless wearing jeans and some chains around his neck along with an orange patterned cap.

He stands behind his friend and grabs her by the throat while saying something.

She looks pained as Brown pulls her head back and reaches up placing her hand on top of his. 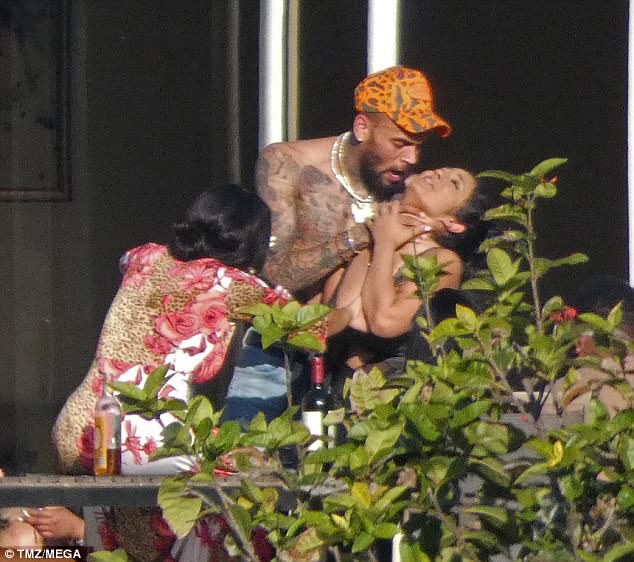 Intervening: Another unidentified woman in a floral dress reaches towards to the pair seemingly trying to break them apart 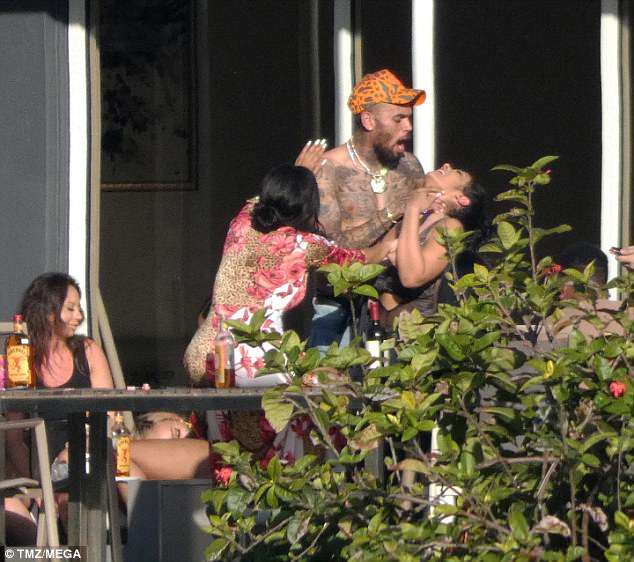 Boisterous: The incident unfolded as Chris Brown hung out at a rented property in Miami during the Ultra Festival 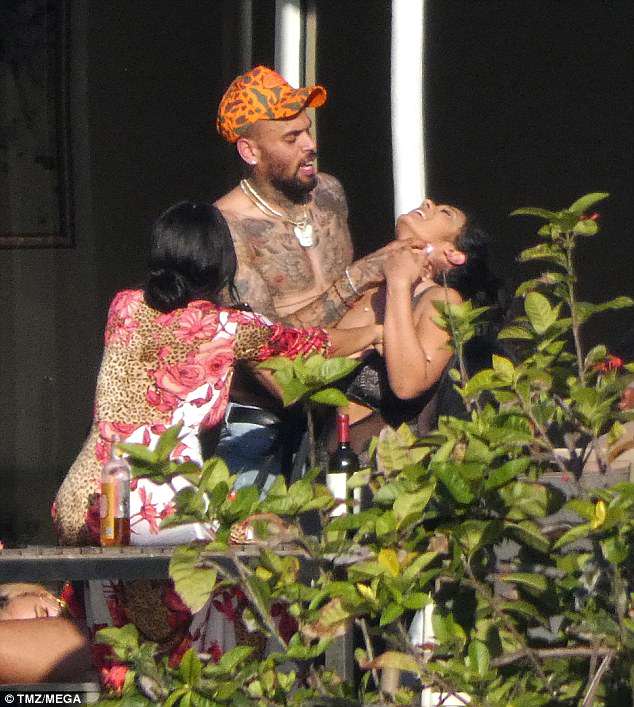 Messing around: In following images things appear less tense, with Chris’ pal smiling as the singer pulls away 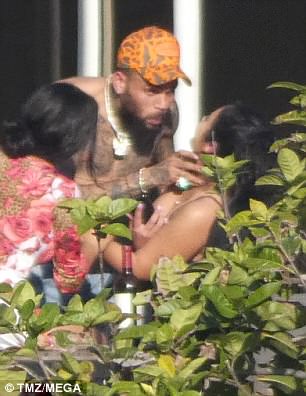 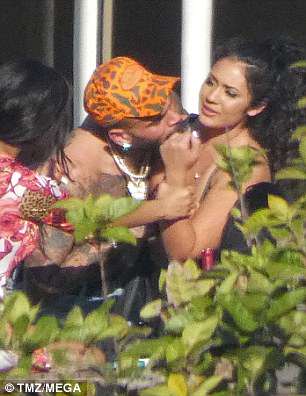 As the moment unfolds a woman dressed in a floral dress, sitting on a nearby table, reaches over to try and break the duo apart.

In following images things appear less tense, with Brown’s pal smiling as the singer pulls away.

Playful or not the images are especially jarring given Brown’s history of domestic violence.

The Loyal hitmaker was convicted of felony assault against ex-girlfriend Rihanna in 2009 after they got into a fight after a pre-Grammys party.

He formally completed his probation in 2015.

Since 2009 the star has gained a lengthy rap sheet. 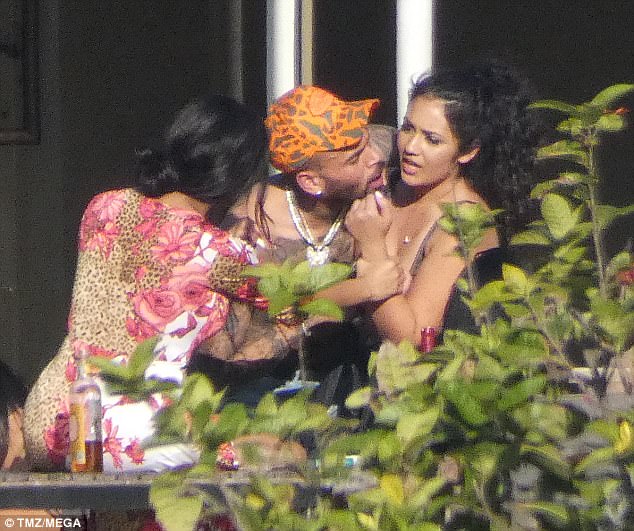 Troubled past: Playful or not the images are especially jarring given Brown’s history of domestic violence 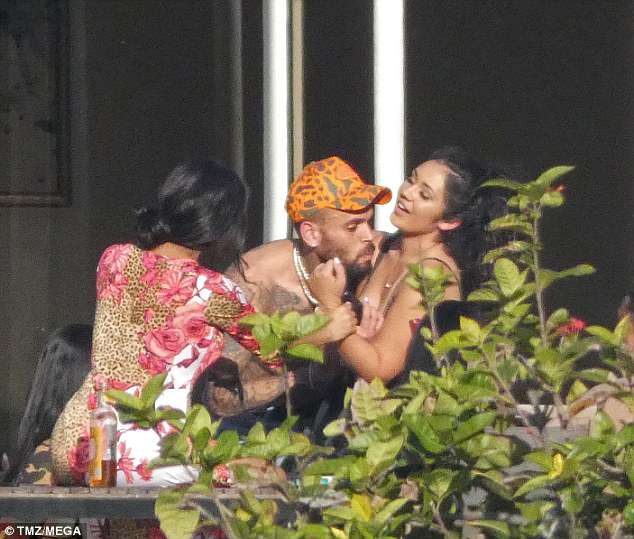 Intense: Brown, who went shirtless and wore a bright orange baseball cap, got right up in the woman’s face 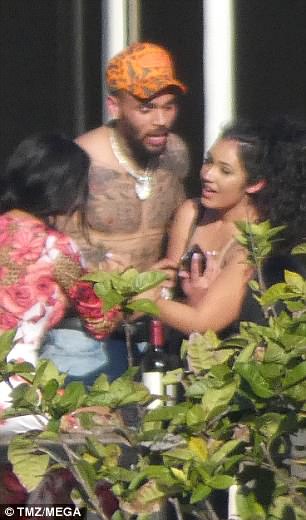 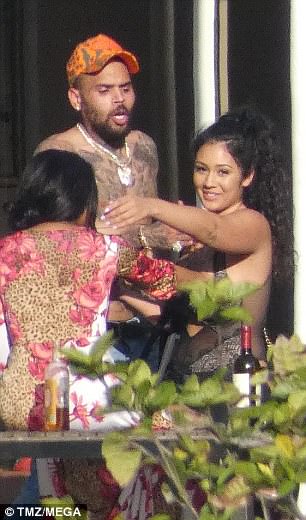 She’s ok! The pretty brunette appeared to be fine as she chatted with the other guest and showed her something on her phone 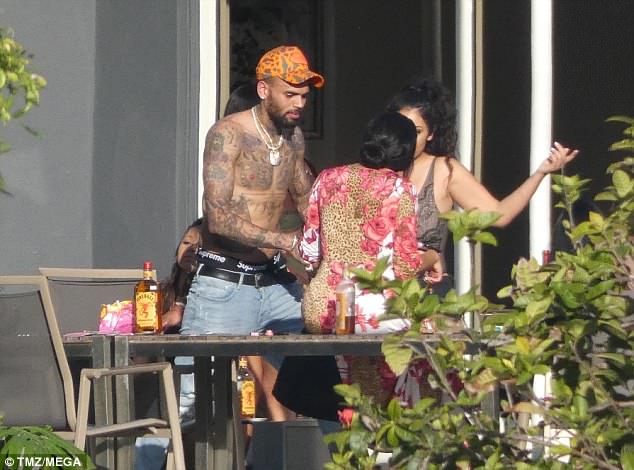 In 2012 Brown was involved in a brawl with Drake and his entourage at a New York nightclub. The fight was apparently over Rihanna.

In January 2013 the Run It! hitmaker was involved in an altercation with Frank Ocean in West Hollywood where he is alleged to have punched or pushed the singer. No charges were pressed.

In october that same year he was arrested for felony assault after punching a man outside the W Hotel in Washington D.C. The charge was reduced to a misdemeanor and he entered a rehab center while awaiting sentencing. 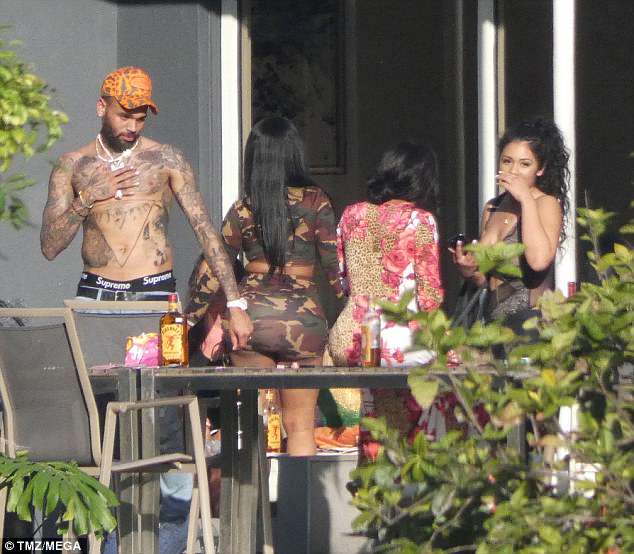 Party don’t stop: The singer was having fun with friends on Monday morning 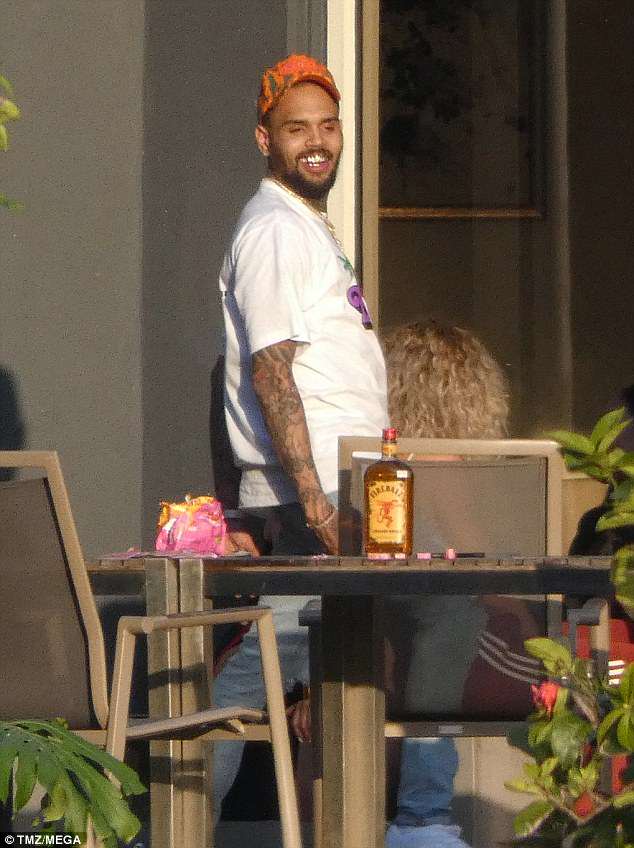 Miami heat: The star appeared in good spirits as he chilled out with pals 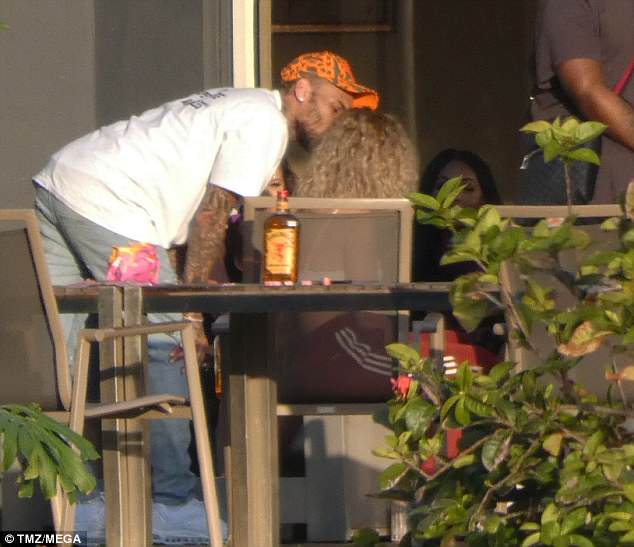 Life of the party: There was no shortage of women at the gathering which took place after the Ultra Festival in Miami 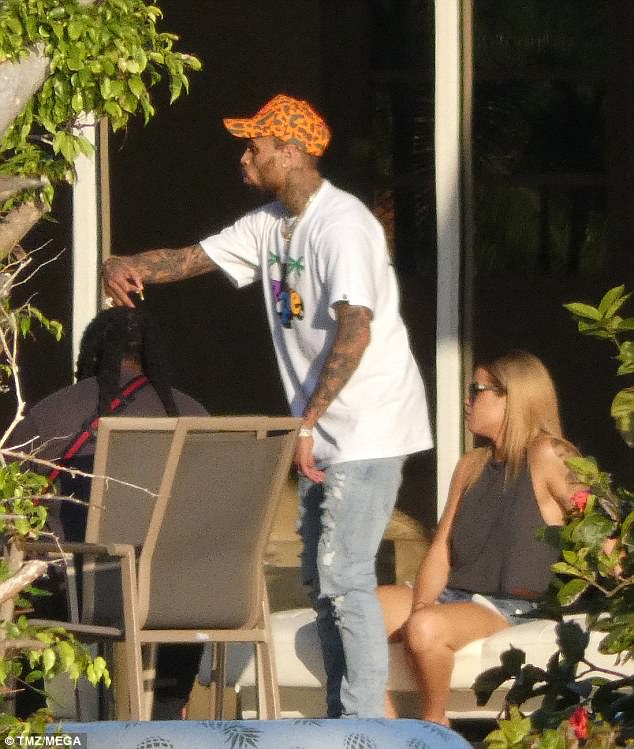 Look at me now: The singer was surrounded by pals and was drinking and smoking after a weekend of partying

He was accused of punching a woman in the face after she tried to take a picture of him in a Las Vegas nightclub in June 2016.

Later that month his former manager Mike G filed suit in Superior Court of the State of California claiming Brown assaulted him in an unprovoked, ‘drug-fueled rage’.

In August 2016 the star was arrested on suspicion of assault with a deadly weapon after a woman alleged the star had pointed a gun at her face in his home earlier that morning. During a standoff with police Brown declared he was innocent in a statement on Instagram. 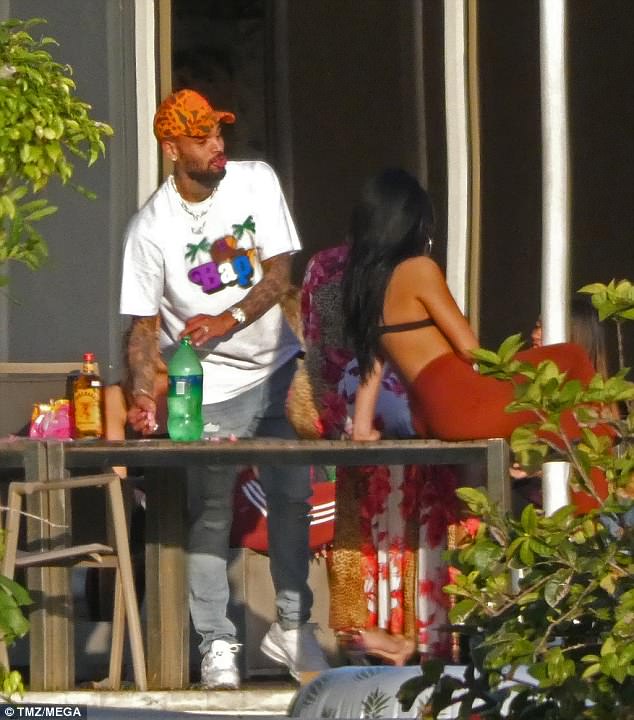 A little refreshment: The singer chatted with guests as he opened up a bottle of Sprite 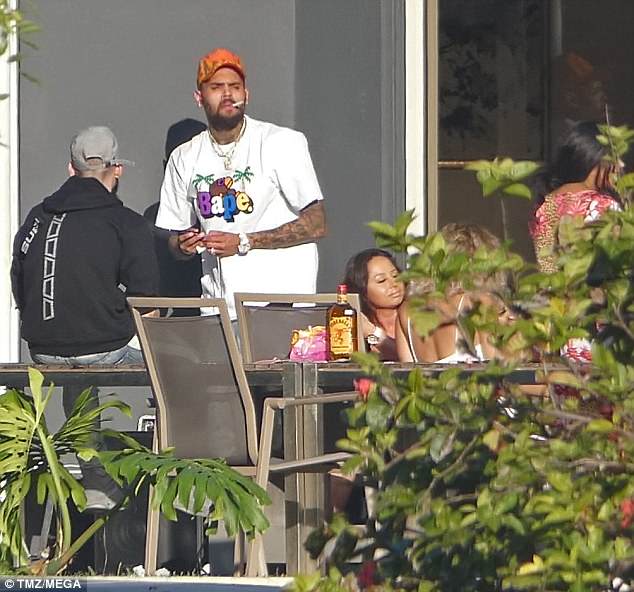 Smoke break: The No Air singer wpre a white ‘Bape’ T-Shirt and a variety of diamond encrusted jewelry