Old Trafford used to be intimidating. You knew you were up against 11 stars, 65,000 supporters — and sometimes the referee, too! You could be sucked into the rowdy atmosphere.

I once slapped David Beckham amid a skirmish during Ryan Giggs’ testimonial! Right now, though, Old Trafford is a stadium that opponents want to visit. It’s a nice, friendly, fun day out.

Brighton rocked up, made it theirs and Graham Potter’s players totally deserved the three points they left with. One of the reasons I love football is for how 90 minutes can leave fans as if the world is ending.

One United supporter calling into BBC’s 606 on Sunday night predicted a bottom-six finish for his club, saying he’s waiting for Denis Law to back-heel them into the Championship! That’s a stretch but a long, old season awaits for the men in red methinks. They’re a work in progress and I don’t think we can blame Erik ten Hag for the slow start.

His use of Christian Eriksen as a false nine didn’t work, but this club’s problems run much deeper than one misguided tactical decision. The fact they are being linked with Marko Arnautovic says it all. I thought it was a spoof when I first heard it! That’s a PR disaster waiting to happen. United don’t help themselves and that opening-game defeat by Potter’s Brighton was all too predictable.

If everybody else could see Everton needed a striker, how couldn’t they? Richarlison was sold to Tottenham for £60million and, as good as he is, Dominic Calvert-Lewin’s injury record does not scream reliability.

So it didn’t take a brain surgeon to work out that Frank Lampard might need a goalscorer —someone with a proven record who can guide them away from the bottom three. Come the opening game against Chelsea, young Anthony Gordon was leading the line and he was swallowed up. 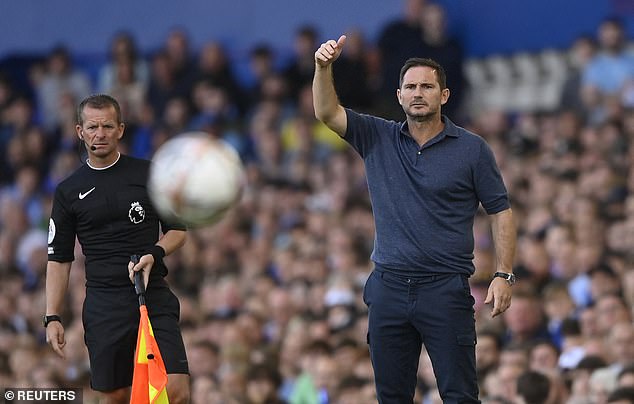 Why did Everton not prioritise bringing in a centre forward? I don’t understand how clubs can have all summer then leave themselves scrambling around now that the season has started. It’s reactive rather than proactive, and not how a big club should act.

Don’t pretend you were not impressed by Arsenal on Friday night. I know I was. They imposed themselves on Crystal Palace, who couldn’t live with Gabriel Jesus.

With all due respect to Alexandre Lacazette and Pierre-Emerick Aubameyang, he is an upgrade on what they have had. Jesus can bring that winning mentality he learned at Manchester City to Arsenal.

You can have a great pre-season — and Mikel Arteta’s side had just that — but it is how you perform once the points are on the line that really counts and Arsenal opened the new season in style.

Pep Guardiola was punchy in his post-match press conference after Manchester City’s 2-0 win at West Ham, saying Erling Haaland was washed up after the Community Shield but now he’s Thierry Henry, Alan Shearer and Cristiano Ronaldo all rolled into one after his Premier League debut. 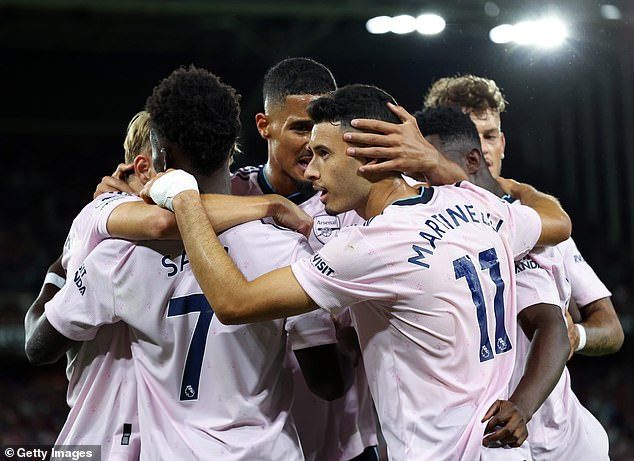 That’s football — one week you’re a doughnut, the next you’re the best thing since sliced bread. But the best strikers never let one iffy performance keep them down. I played with Shearer and Henrik Larsson and if they had a stinker — as rare as that was — they’d often bounce back with a goal or two on their next outing.

It’s frightening how good Haaland is

Erling Haaland possesses that inherent confidence and he looks a ludicrous prospect. It’s his acceleration that petrifies defenders.

He was clocked at close to 23mph last season and it’s like watching an Olympic sprinter, the way he propels himself forward. West Ham’s Alphonse Areola won’t be the last goalkeeper to be fooled into thinking he can get to the ball before Haaland this season.

Guardiola says there’s room for improvement in Haaland and that’s a frightening thought for City’s rivals. Where can he improve? The left foot is the money-maker — it can be used as a sledgehammer or to delicately chip a goalkeeper who is closing him down.

There is a brutality in his finishing. But maybe his manager is challenging him to rack up numbers with his right foot, too. He wasn’t prolific with his head in the Bundesliga, but then Borussia Dortmund weren’t a crossing club. At 6ft 5in, he’ll meet a fair few crosses for City, I’m sure. One other area where he will improve is in his link-up play. What was it Shearer said on Sunday? Only 258 to go? If Haaland hangs around for a decade, then Shearer’s record is a realistic target. 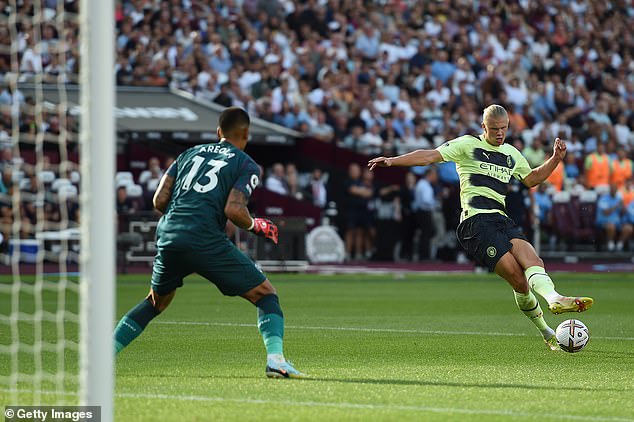 Dean Smith got sacked at Aston Villa because it was felt that he wasn’t taking them on to the next level.

Villa are an ambitious lot and that trip to the Vitality Stadium will have been seen as a gentle start. Unfortunately for manager Steven Gerrard, they went and fluffed it. Losing 2-0 to a pair of set-pieces was the worst possible start.

He had a grace period last season, seeing as he took over in November, but that is now up. The pressure is on Gerrard to deliver and show that Villa can make proper progress under him.

Lack of signings is killing Leicester

Leicester manager Brendan Rodgers looks like a ticking time-bomb and I don’t blame him. He has said Wesley Fofana and James Maddison are absolutely not for sale.

Chelsea want Fofana for £80m and Newcastle want Maddison for £60m. If one or both of them leave Leicester, I would not be surprised if Rodgers left. The Foxes have not made a single signing yet in this transfer window and on top of this have now lost captain Kasper Schmeichel to Nice.

These are worrying times for Leicester. Rodgers is a brilliant coach and a top manager, but he needs help.