He shed almost 60lbs for the cult film The Machinist in 2004 and bulked up by gorging on doughnuts for months for his 2013 flick American Hustle.

And Christian Bale proved his dedication to his roles once again on Thursday, as he showed off his fuller figure to play ex-Vice President Dick Cheney in the upcoming biopic Backseat.

The Batman star, 43, looked unrecognisable with balding white hair and aged skin as he walked around the Los Angeles set in a hospital robe.

The Oscar-winning actor, who said he ate ‘lots of pies’ to bulk up, displayed a fuller physique to play Cheney in the biopic, written and directed by Adam McKay.

The drama is centred based around Cheney’s career as George W. Bush’s second in command and his policies which have shaped the world.

Amy Adams, who he has starred opposite before in American Hustle, will play Cheney’s wife Lynne.

She has also undergone a dramatic transformation for the role and was previously seen with a short blonde wig and prosthetics on her face. 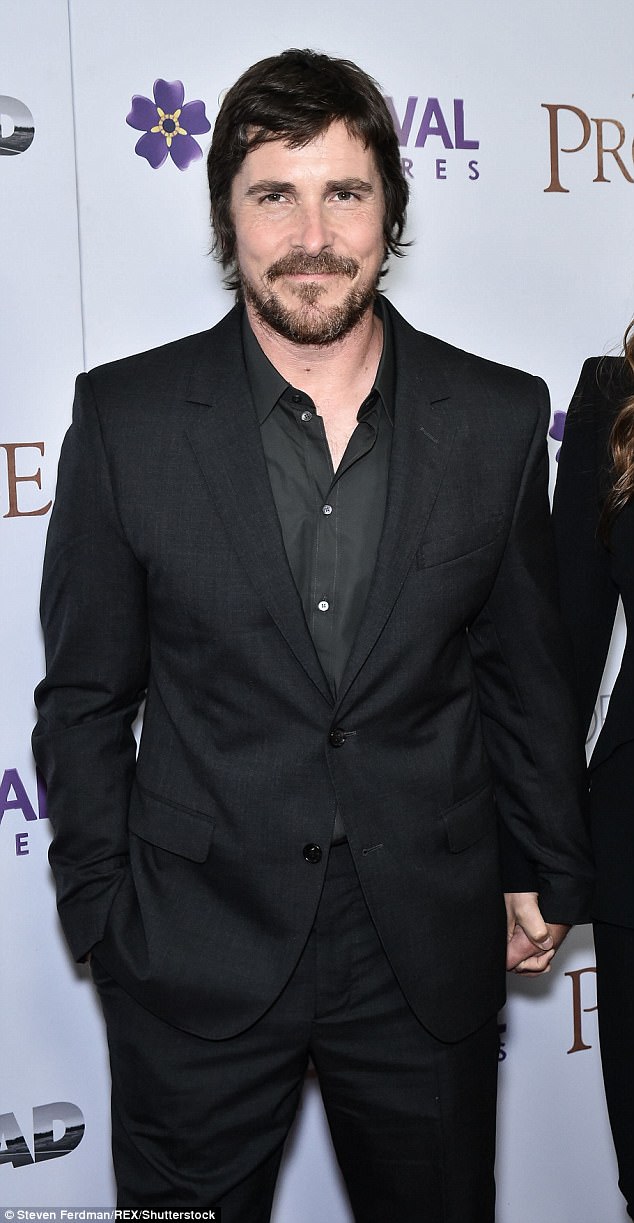 Dedicated: The Oscar-winner, who ate ‘lots of pies’ to bulk up, displayed a fuller physique to play Dick Cheney in the biopic, written and directed by Adam McKay. Pictured in April 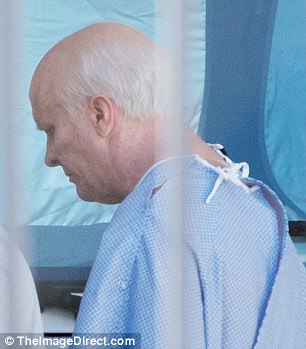 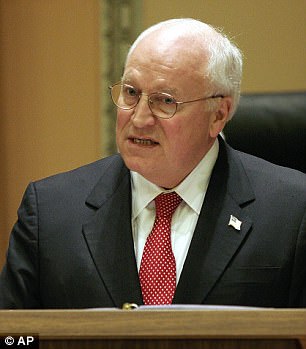 Gritty role: The drama is centred based around Cheney’s (pictured) career as George W. Bush’s second in command and his policies which have shaped the world 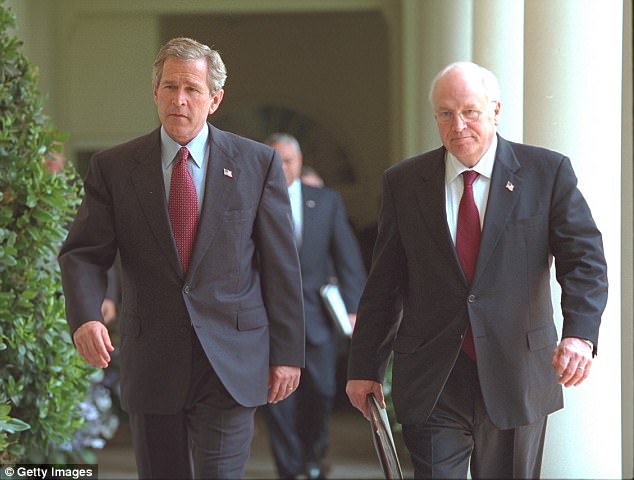 The role: Here Cheney is seen with President Bush in 2002 in Washington DC

Christian’s weight has yo-yo’d in accordance with his film roles over the year.

In his breakout film American Psycho, Christian beefed up and gained a six pack for his many topless scenes in the thriller.

In 2004, he lost five stone to play emaciated insomniac Trevor Reznik in The Machinist by barely sleeping and surviving on a diet of coffee and apples.

After landing the role of the Caped Crusader in Batman Begins just six weeks later, he bulked up his tiny 121 pound (8st 6lb) frame in just six weeks by gorging on pizza and ice cream. 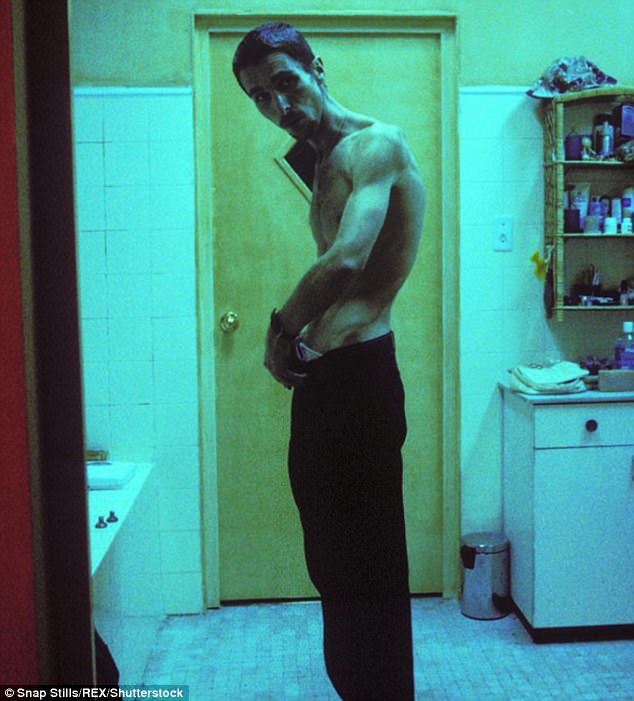 Slender man: It comes 13 years after the 43-year-old Batman star lost nearly 60lbs for his cult hit movie The Machinist 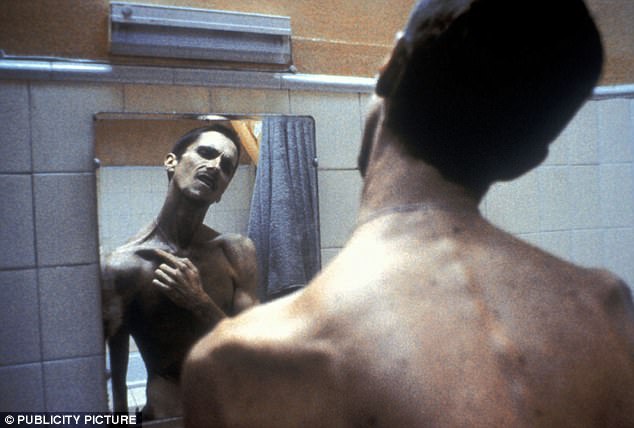 Harrowing: He lost five stone to play emaciated insomniac Trevor Reznik in The Machinist by barely sleeping and surviving on a diet of coffee and apples

He said: ‘The director, Christopher Nolan, asked me to try and put on as much weight as I could because he would find it very difficult to convince the studio to cast me if I was a beanpole.

‘In doing so I overdid it because I was enjoying gorging. I was ignoring advice about taking it slowly because my stomach had shrunk, and I should just go with soups.

‘I was straight into pizza and ice-cream and eating five meals in a sitting. My stomach expanded really quickly. I got very sick during that time but I enjoyed getting sick. I didn’t mind it at all. 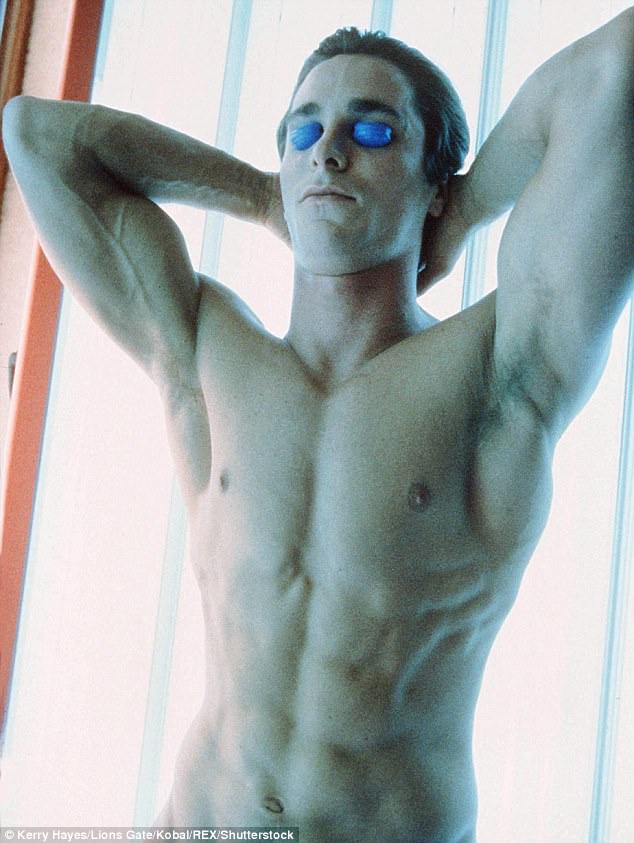 Ripped: The former child actor with a chiseled body for the 2000 film American Psycho 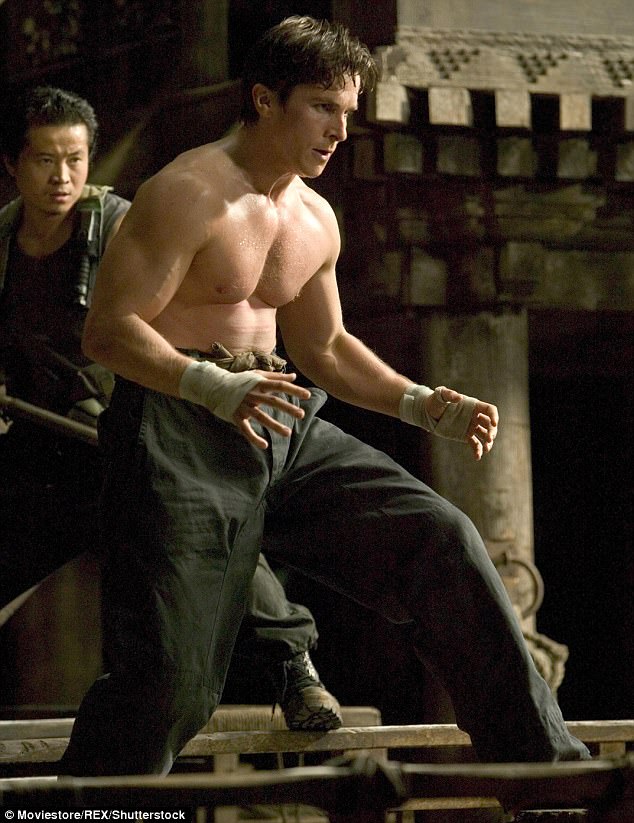 More bulked up: Bale put on muscle to play Bruce Wayne and the Caped Crusader in the 2005 film Batman Begins

‘In that short amount of time I did actually go from 121 (pounds) right back up to 180 (pounds) which is way too fast so that resulted in some doctor visits to get things sorted out.’

And the star was out-of-shape with a pot belly for the 2013 movie American Hustle.

In 2013 he told People that gaining weight for American Hustle was not difficult: ‘It’s easy to start with … you’re just sitting on your butt and you’re eating lots of doughnuts and eating bread and everything like that.

‘But you do it for two months and your body starts to rebel against you, it’s just saying, “No, please,” and your back is aching and there’s also some problems with that. And then you’ve got to lose the weight at the end of it, you know? I wish it was simple.’ 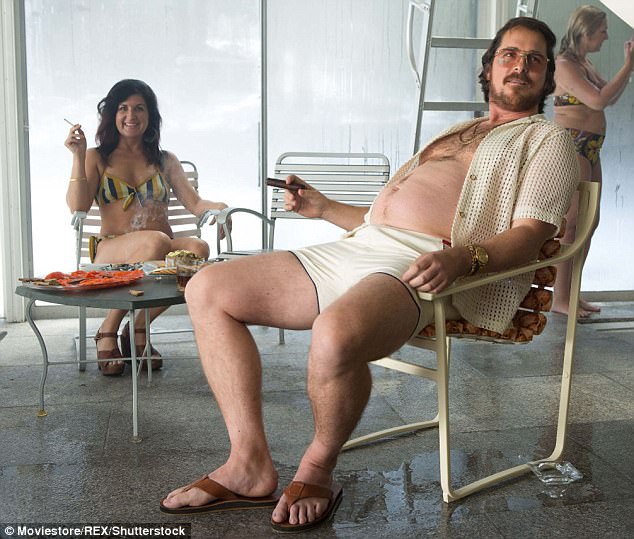 Pot bellied criminal: The star with an out-of-shape physique with a co-star in the 2013 movie American Hustle 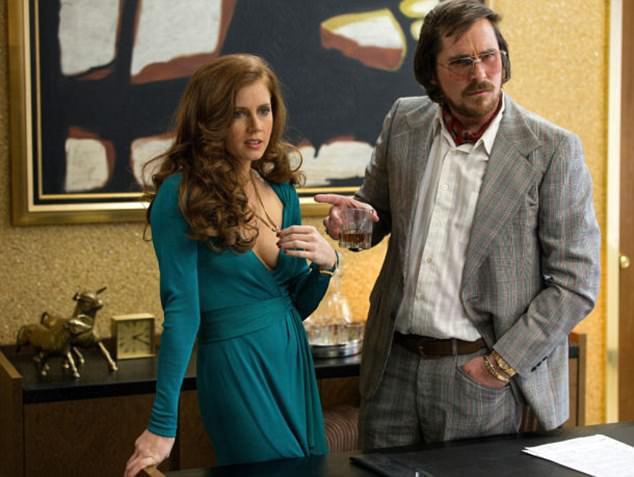 Method actor: Bale revealed he ate ‘lots of doughnuts and bread’ for months to bulk up for the role