There was a cynical undercurrent that marked Christian Pulisic’s £57.7million transfer to Chelsea last month.

The American is a player with the weight of a nation on his shoulders  – the star name set to catapult soccer into the homes of 325 million people. That makes him a lucrative acquisition and, so the line goes, Chelsea wanted a piece of it.

That simplicity ignores the fact that Pulisic might actually be able to play pretty well.

Against Tottenham in the Champions League on Wednesday night, he had the chance to show why the west London club’s outlay was more than just an encroachment into another market.

Chelsea supporters were given a first look at their £57.7million signing Christian Pulisic 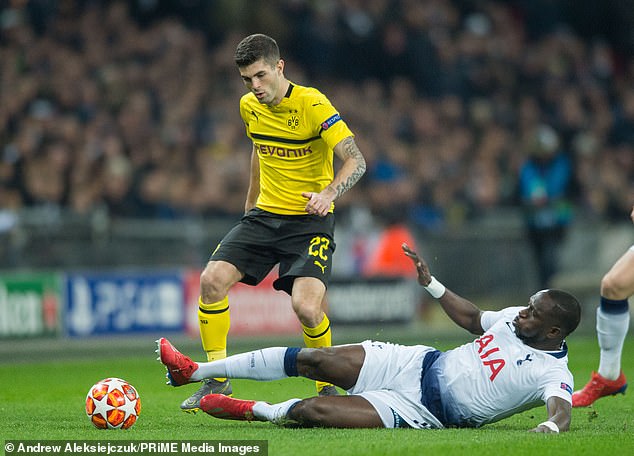 The American winger, 20, has featured only intermittently this season for the German side

And while he wasn’t able to endear himself to his new club’s supporters in the best way possible – by inflicting a defeat on their London rivals – he was able to offer glimmers of real quality, although any expectation of a like-for-like for Eden Hazard may have to be parked, for now.

The wideman has featured only intermittently this season for Dortmund during their assault on the Bundesliga title –  perhaps unsurprising considering the indomitable rise of Jadon Sancho.

Domestic eyes again here drifted towards the young Englishman –  the intoxicating allure of an English wing-wizard strutting his stuff on Wembley’s hallowed turf too much to ignore.

Sancho’s guile and flair saw him again excel but he was only one part of a front three that for long spells in the first half terrorised Tottenham’s back-three of Juan Foyth, Toby Aldeweireld and Davinson Sanchez.

Pulisic, making only his 14th start of the season, was a key part of Dortmund’s excellent start.

The 20-year-old started the game brightly and by the interval, Tottenham wing-back Serge Aurier would need a lie down. 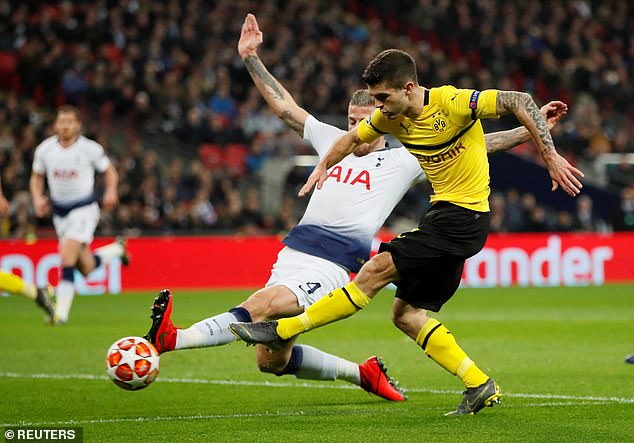 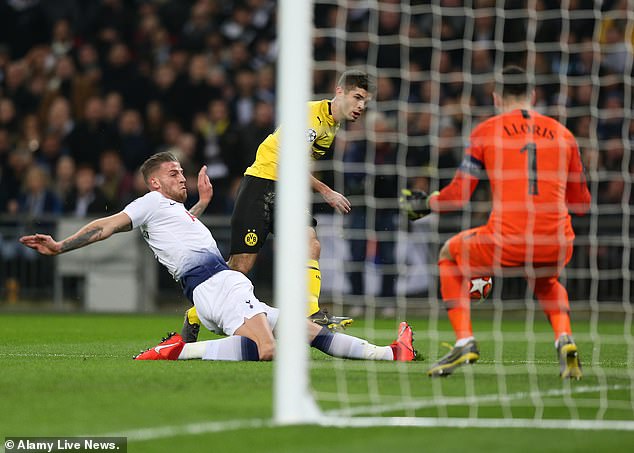 Pulisic has electric pace but he also has a rawness to his game, showing room to improve

The winger drifted over to the left flank and after 12 minutes he had the Ivorian in the book. Two flicks of his left boot and he was away, but just as he threatened to break clear, Aurier clipped his heels.

It was a hint of what he was capable of and moments later he would find himself in behind the Spurs defence.

Excellent pressure from the youngster and captain Mario Gotze saw the ball spring loose off Foyth – but rather than square the ball to an onrushing Sancho, Pulisic made the wrong choice, electing to shoot at Hugo Lloris at the near post.

That three minute spell would mark the two sides of Pulisic. At times, he was unplayable, a creator in chief with pace to cause palpitations. 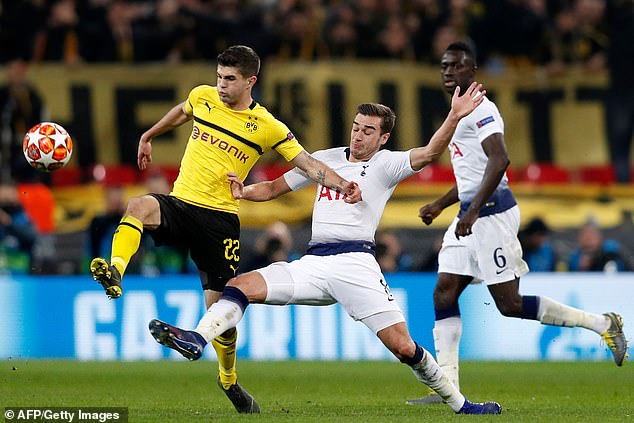 He also created the best chance of the first half, sending a whipped cross perfectly onto the head of Dan-Axel Zagadou, whose stooping header was pushed away by Lloris.

But there was also a real rawness to his game. He won’t have been helped by his lack of games compared to last season under Peter Stoger and Peter Bosz – which will cause concern for Maurizio Sarri – but his decision making and concentration sometimes went awry.

In the second half, Dortmund were overwhelmed as Spurs finally shutdown their attacking play. Pulisic, like Sancho, was effectively marshaled, but in one rare moment, he had the chance to break clear. 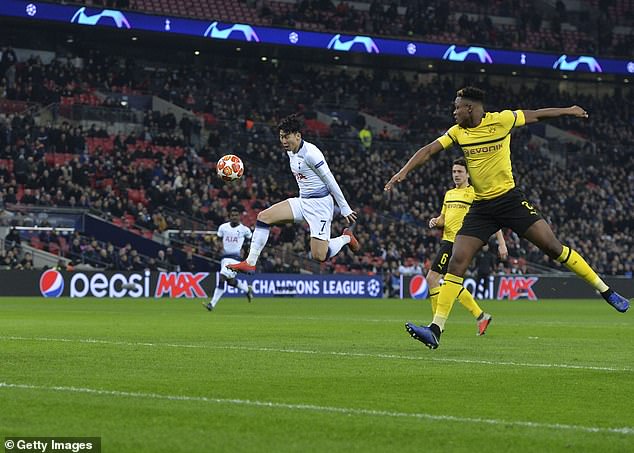 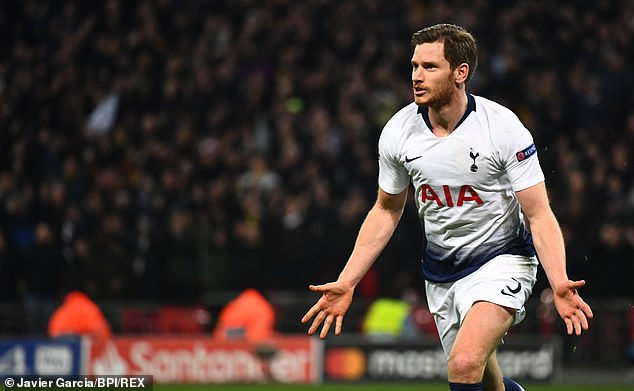 The ball was played into space from Axel Witsel. With grass between him and a quaking Foyth in front of him, he tripped over his own feet, wasting the attacking potential of an increasingly rare forward foray.

Yet, despite the odd lapse in concentration, it is clear that the American, like Sancho, is the type of player who will get supporters off of their seats.

Indeed, every time Foyth’s pocket was picked, every time Aurier was left trailing in his wake, there would have been a quiet shrill of delight from residents of the Shed End.

The challenge for the 20-year-old when he arrives this summer will be the prospect of filling a Hazard-shaped void. The Belgian increasingly looks set on a move to Real Madrid, and should he depart, Pulisic could well become an unwilling heir-apparent. 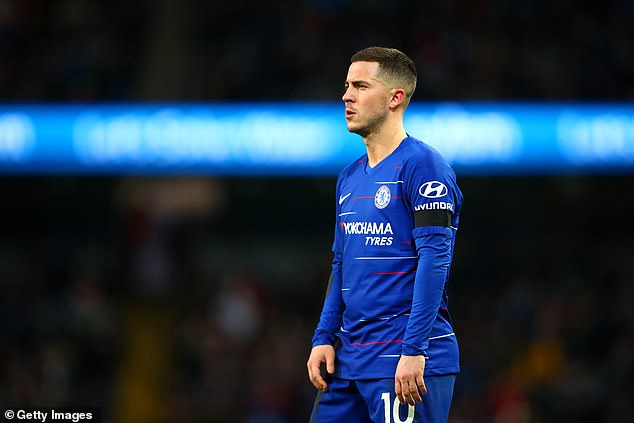 But the youngster is used to pressure. After moving to Germany at 16 as America’s great hope, the kid from Hershey, Pennsylvania, won’t be taken aback by the weight of expectation.

And on tonight’s showing, he’s proved he is capable – in spells – of influencing games at the highest level.

With the right coaching he will become more consistent, and that will make him worth of every penny.