CHRISTOPHER STEVENS: Terrifying Nazis is the Good Life for this fearless Margo lookalike!

Crikey, Adolf had better watch his goosestep. Imperious and haughty, it looks like The Good Life’s Margo Leadbetter is taking on the Nazis.

Actually, the fearless American journalist Nancy Campbell in World On Fire (BBC1) is played by Hollywood’s Helen Hunt, but with her long nose and wavy bob she’s the spitting image of Tom and Barbara’s snooty neighbour — actress Penelope Keith in the Seventies sitcom.

That marvellous comic actor Paul Eddington played her cringeing husband: Margo had only to snap his name once — ‘Jerry!’ — and the poor man doubled up and froze, like a statue with cramp. 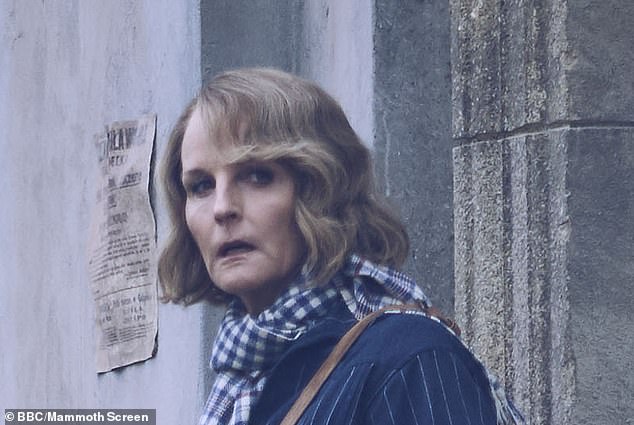 Crikey, Adolf had better watch his goosestep. Imperious and haughty, it looks like The Good Life’s Margo Leadbetter is taking on the Nazis. Nancy Campbell is played by Hollywood’s Helen Hunt

It was fitting, then, that when the jackbooted Jerries encountered Margo’s doppelganger on the Polish border in 1939, they were so terrified by her ringing voice that they couldn’t hold their rifles straight.

She dodged their bullets easily and dashed away to tell the world that Panzer divisions were poised to overrun Poland.

Writer Peter Bowker’s real inspiration for Nancy’s character was one of my journalistic heroines, Clare Hollingworth, who died aged 105.

Not American but British, she was the first reporter to discover Hitler’s preparations for the invasion, after she boldly borrowed a Warsaw diplomat’s car (he was her ex-lover) and motored into Nazi Germany, straight through the checkpoints and past hundreds of tanks. 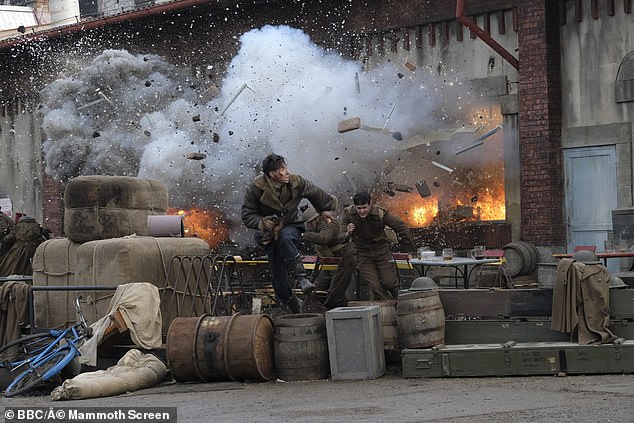 It was fitting, then, that when the jackbooted Jerries encountered Margo’s doppelganger on the Polish border in 1939, they were so terrified by her ringing voice that they couldn’t hold their rifles straight

It was the scoop of the century. By the time Hollingworth got back to Warsaw, her department head had fled . . . so she liberated a bottle of champagne from his fridge and declared herself a freelance war correspondent. What a woman.

World On Fire has so far failed to evoke such effortless panache, but the opener in this sweeping seven-part tale was solid and engaging.

Bowker is best-known for The A Word, a family drama with deeply believable characters, and the real attraction of his war story promises to be the depth of its psychological portraits, rather than the breadth of its historical vision.

Other TV classics, such as Herman Wouk’s The Winds Of War, painted the global conflict, but World On Fire focuses more on a handful of people whose lives criss-cross at the outset of World War II.

At its centre is jazz singer and factory girl Lois (Julia Brown) who loves naive idealist Harry (Jonah Hauer-King), who is madly in lust with Polish firebrand Kasia (Zofia Wichlacz). 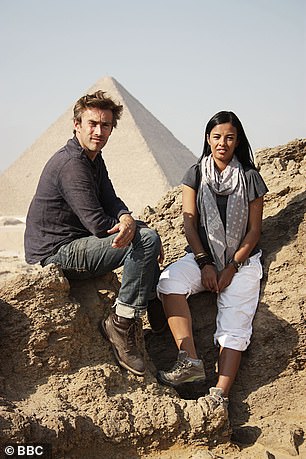 There wasn’t much to this diary of a dig, mostly because grave robbers had got to the tomb long before the cameras

So far, the lovebirds are less interesting than their parents, including Sean Bean as a shell-shocked veteran of the World War I trenches and Lesley Manville as a self-confessed ‘elitist’ who has a crush on British Fascist leader Oswald Mosley.

It’s his polo-neck, she says. A riot at a Mosley rally was the setting for the first scene, which conjured an odd sensation of deja vu, since an identical rally supplied the backdrop for the climax in Peaky Blinders at the same time last Sunday.

Deja vu was also a major component of Egypt’s Lost Pyramid (C4) but that was because the archaeologists kept telling us the same small smattering of facts.

There wasn’t much to this diary of a dig, mostly because grave robbers had got to the tomb long before the cameras. All they’d left was an empty box with a faded inscription and half a skeleton.

With a lot of repetition and some long tracking shots of historians in sweat-stained khaki, these bare bones were stretched out to fill an hour-long documentary.

It didn’t help that the TV crew appeared to be one of many, as cameramen jostled to film the excavation in case a golden artefact should suddenly emerge from the sands.

Travesty of the weekend: Brawls, bawdy houses, a wild carriage chase and sex on the marble floor — whatever would Jane Austen say about Sanditon (ITV)?

I can’t imagine this is quite the plot the author had in mind for her unfinished final novel.