Climate change is ‘impeding the ability of organisms to communicate’

Climate change is impeding the ability of organisms to communicate through odours and other chemical signals, a new study has warned.

This type of communication enables them to mate and interact with each other; locate predators, food and habitats; and sense their environment.

It is the first time researchers have demonstrated that climate change affects interactions between organisms in different realms in similar patterns.

They said it was a ‘wake-up call’, and warned that the ‘language of life’ was in peril.

The new opinion paper shows the extent to which alterations in temperature, carbon dioxide and pH levels – created as a result of climate change – can affect every step of the way organisms communicate with each other chemically.

Climate change is impeding the ability of organisms to communicate through odours and other chemical signals, a new study has warned. It provided insight across marine (pictured, stock image), freshwater and terrestrial ecosystems

WHY DO DOGS SNIFF EACH OTHER’S BOTTOMS?

The odd behaviour of dogs sniffing each other’s bottoms is more vital than it first appears: it gives the sniffer details on the sniffee’s sex, diet, emotional state and more thanks to complex chemical communications.

One of the glands here is the apocrine gland, which gives the dog its natural smell.

Another called the sebaceous gland also plays a part, which mostly lubricates and waterproofs the skin and hair of mammals.

Experts found that the primary chemical compounds that are released from these glands and produce a dog’s aroma are a variety of short-chain acids and something known as trimethylamine.

The chemicals allow another dog to learn information that would otherwise be mostly unavailable.

These processes regulate interactions in the Earth’s ecosystems and are essential to our environment, the researchers explained.

‘Chemical communication is the ubiquitous language of life on earth – but this is being jeopardised by global change,’ said Dr Patrick Fink, co-author and research group leader at the Helmholtz Centre for Environmental Research.

‘There’s no talking with words for life under water, so aquatic organisms “talk” in chemical signals.

‘But this fine-tuned “language” is in peril. Globally changing climate and water chemistry are causing acidification threats that may disturb chemical information exchange among freshwater and marine organisms.’

Researchers gave an example of ladybeetle larvae, which produce twice as much chemical information under 77°F (25°C) than under 59°F (15°C).

Once emitted, sudden shifts in environmental temperature can accelerate pheromone decay and reduce pheromone detectability by insects as a consequence of disturbed activation of the olfactory receptors, they said.

These disruptions in chemical communication can therefore cause a reduction in individuals’ ability to locate each other at a distance and identify potential mates.

The researchers also wrote how a range of marine crustaceans and molluscs use peptides to coordinate caring for their offspring and finding suitable nests.

However, these peptides are changed by a difference of only 0.4 pH units.

The research paper was co-authored by the University of Hull, Plymouth Marine Laboratory, the Universite de Liege and the Helmholtz Centre for Environmental Research GmbH – UFZ.

It is an overview of existing evidence and insight across marine, freshwater and terrestrial ecosystems.

Professor François Verheggen, co-author and Professor of Entomology, Université de Liège, said: ‘In terrestrial ecosystems, plants and animals commonly communicate with odours and we have been studying the effects of climate change with growing concern over the past years.

‘However, this new perspective shows that the effects we found in terrestrial systems strikingly resemble findings in other system at the mechanistic level despite the different stressors.’

Dr Christina C Roggatz, research fellow in marine chemical ecology at the University of Hull and lead author of the paper, added: ‘This paper is a wake-up call. We are heavily reliant on the Earth’s ecosystems and the chemical communications that regulate them.

‘The predominantly negative effects that climate change has upon the language of life within terrestrial and aquatic ecosystems could have a range of far-reaching implications for the future of our planet and human wellbeing, for example by impacting food security and fundamental ecosystem services that make our planet habitable.’ 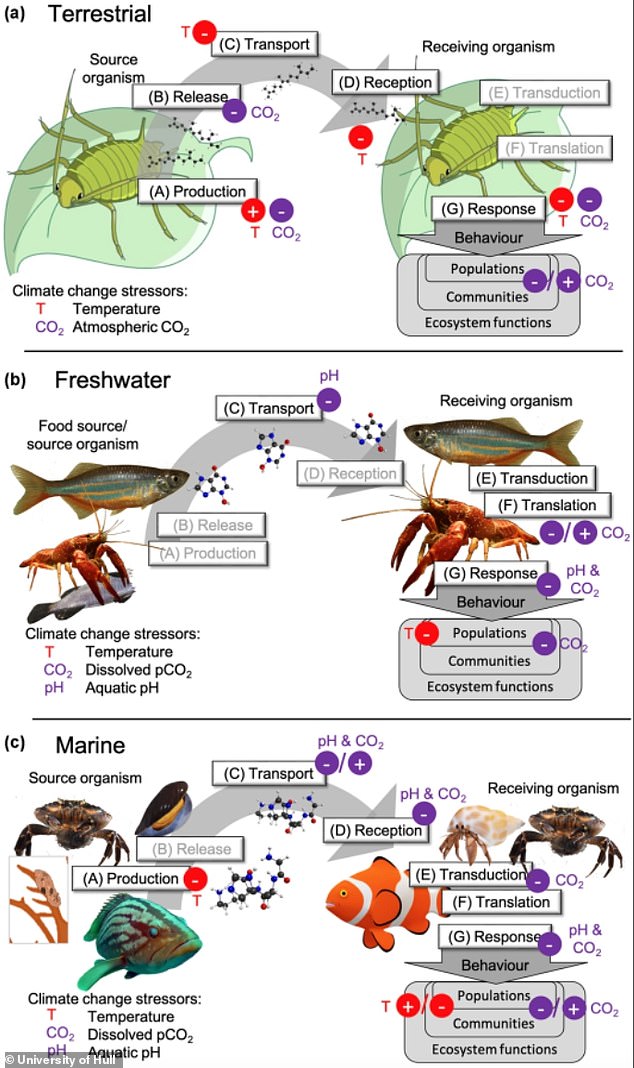 The new opinion paper shows the extent to which alterations in temperature, carbon dioxide and pH levels – created as a result of climate change – can affect every step of the way organisms communicate chemically 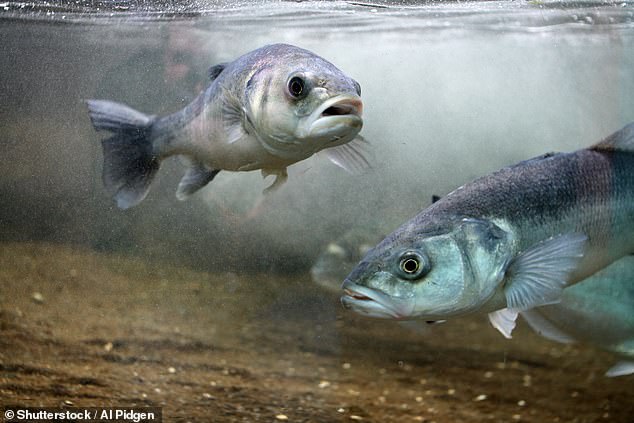 Dr Roggatz said: ‘Although a growing number of studies suggest that climate change-associated stressors cause adverse effects on the communication between organisms, knowledge of the underlying mechanisms remains scarce.

‘We urgently need a systematic approach to be able to compare results and fully understand the potentially disruptive impact that climate change is having upon each step of this fundamental communication process.

‘Understanding this means we are better equipped to predict and protect the future of our planet.’

Dr. Jörg Hardege, co-author and Reader in Chemical Ecology, University of Hull, said: ‘It is becoming clear that regardless of the environment an organism inhabits, the sea, freshwater or land, the climate change associated increase in CO2 is altering the way how organisms’ sensory systems function.

‘Although we are starting to understand the mechanisms how olfactory disruption, the longer-term consequences on animal interactions and survival can currently only be speculated about, leaving an urgent need to further research.’

The research has been published in the journal Global Change Biology.