Climate change: Melting Antarctic ice sheets may cause sea levels to rise by 17 FEET by 3000 AD

Melting of the Antarctic ice sheet under current global warming trends could cause sea levels to rise by as much as 17 FEET by the end of the millennium, study warns


When Busted sang about having been to the year 3000 — where ‘not much has changed, but they lived underwater’ — who’d have suspected it might be prophetic?

In fact, sea levels may rise by as much as a whopping 17 feet by the millennium’s end if the Antarctic ice sheet continues to melt under current global warming trends.

This is the warning of a team of researchers led from Hokkaido University, who modelled the fate of the Antarctic ice sheet beyond the 21st century.

While the ‘business as usual’ forecast is bad, this fate may be averted if greenhouse emissions are curbed, the team said, keeping sea level rise to under one foot.

Sea levels may rise by as much as a whopping 17 feet by the millennium’s end if the Antarctic ice sheet continues to melt under current global warming trends. Pictured: Antarctica

In their study, Dr Chambers and his colleagues built on models previously consulted by the Intergovernmental Panel on Climate Change in their recent Sixth Assessment Report.

This United Nations body exists to advance our understanding of human-driven climate change and provide objective and comprehensive scientific information on the subject.

However, it does not conduct original research or monitor the progress of climate change — but rather conducts a periodic, systematic and thorough review of existing scientific literature in relevant fields.

‘This study demonstrates clearly that the impact of 21st-century climate change on the Antarctic ice sheet extends well beyond the 21st century itself,’ said paper author and meteorologist Christopher Chambers of Japan’s Hokkaido University.

‘The most severe consequences — multi-meter contribution to sea-level rise — will likely only be seen later,’ he added.

‘Future work will include basing simulations on more realistic future climate scenarios, as well as using other ice-sheet models to model the outcomes.’

This verbosely titled international project employed the latest generation of climate models to estimate the impact of global warming on both Antarctica and Greenland’s ice sheets come the end of the current century.

The results — which informed the recent Sixth Assessment Report of the Intergovernmental Panel on Climate Change — found that, under unabated warming, the Antarctic will contribute some 3–12 inches (8–30 cm) to sea level rise.

This figure, however, could be curbed to just 0–1 inches (0–3 cm) in scenario where greenhouse gas emissions were significantly reduced.

Up until the year 2100, the simulation ran exactly the same as in the original ISMIP6 experiments — beyond which, the team assumed that the late 21st-century climatic conditions remained constant, so no further climate trend was applied.

From the models’ outputs, the team focussed on the total mass change of the southern continent’s ice sheets and regional changes in East and West Antarctica and on the Antarctic Peninsula — as well as the contributors to such. 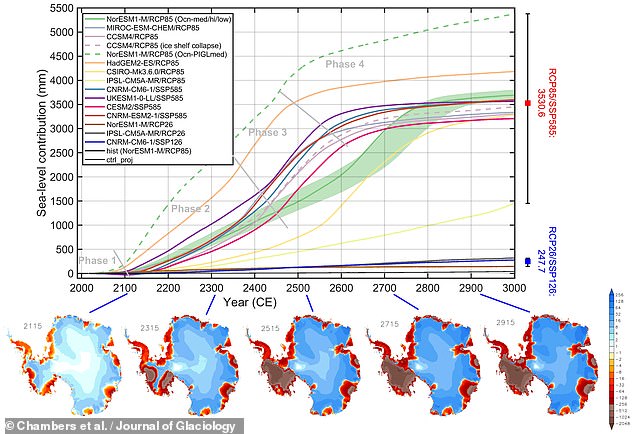 By the year 3000, sea levels could rise by as much as 4.9–17.7 feet (1.5–5.4 metres) under current warming trends — resulting in the largest part from the collapse of the West Antarctic ice sheet.

Could emissions be curbed, however, the researchers’ models suggest that sea level rise could be constrained to just 0.4–1 feet (0.13–0.32 metres).

The potential collapse of the West Antarctic ice sheet would be made possible, the team noted, by the fact that it is grounded on a bed that is mostly below sea level.

The full findings of the study were published in the Journal of Glaciology.