Drivers face a diversion of 58 miles get around a two-mile closure in Hampshire this weekend in what has been called Britain’s biggest ever traffic diversion.

A two-mile stretch of the M27, between junctions 3 and 5 at Romsey and Southampton, will close from 9pm tonight until Monday morning.

The diversion will see westbound traffic driving out to Andover and the A303, out to Salisbury and back round to Southampton via the A34.

Lorry drivers face a mammoth 58-mile diversion while smaller vehicles will be allowed to use smaller routes.

A two-mile stretch of the M27, between junctions 3 and 5 at Romsey and Southampton, will close from 9pm tonight until Monday morning while a bridge (pictured) is replaced

The weekend closures – with two more to follow in the next 12 months – will enable engineers to repair a bridge spanning the motorway as part of a £19million renovation project.

Hampshire’s fire and rescue service described the disruption as ‘the biggest traffic diversion ever in the country’.

A spokesman for the Road Haulage Association slammed the closure, saying: ‘At a time when a typical hauliers’ profit margins are one to two per cent, the impact of this diversion will hit hard.

‘Delivery times will also be affected and many drivers will be forced to park up to take statutory rest breaks on the route, with some even needing to park up overnight.

‘It is also inevitable that drivers will be tempted to use other shorter routes, some of which may not be suitable for lorries.’

The RHA added that a single trip along the diversion route would cost a haulier an extra £35 in fuel alone. 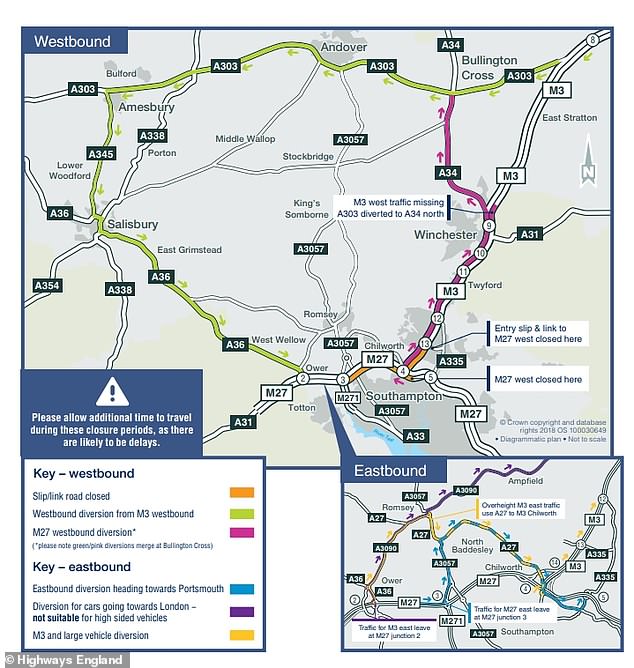 The diversion will see westbound traffic driving out to Andover and the A303, out to Salisbury and back round to Southampton via the A34

Highway bosses said the concrete bridge causing the closure, which was built in the 1970s, needed replacing after ‘severe’ cracks were found in the structure.

Thousands of vehicles use the bridge over the busy motorway each day but regular usage led to a 26-tonne weight restriction being put in place.

Highways England route sponsor John Henderson said: ‘Completing these key phases of work at the weekend means that restrictions can be kept to a minimum at other, busier, times and we have chosen diversions that are the most suitable for the type and volume of traffic that usually uses the M27.’

Following the first closure this weekend, the M27 will be closed again next year, April 26 to 29 and between October 18 and 21.