A Coles supermarket was ram raided in the early hours of Thursday morning amid panic-buying over concerns about a coronavirus pandemic.

The front  doors of the store, at Curtin in the Australian Capital Territory, were smashed when the two robbers drove their car through the front of the shop.

Many claimed panic-buyers had sunk to new lows after images of the smashed glass were posted online.

‘So, instead of panic buying, people are now just ram raiding… we seriously need to wake up to ourselves,’ one person wrote. 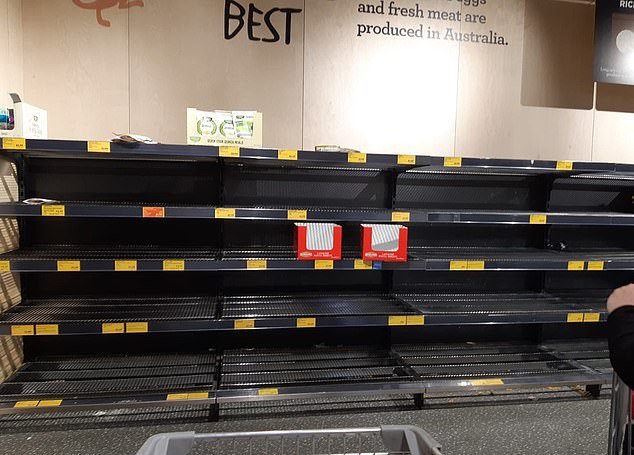 ACT police, however, have confirmed the break-in was not linked to COVID-19.

‘At about 4.10am this morning a red Toyota sedan was driven into the front doors of a supermarket in Curtin (ACT),’ a spokesperson said.

‘Two persons entered the store and left a short time later with no stolen property. They went straight to the cigarette counter but left empty-handed.’

Police are investigating the incident and urge anyone with information to contact them.

Supermarkets around the country have been subjected to panic-buying by shoppers rushing to purchase items amid concerns of a potential quarantine lockdown.

The government has warned Australians against stockpiling items with prime minister Scott Morrison calling the behaviour ‘disappointing’ this week.

After shelves around Australia were repeatedly cleaned out of products such as toilet paper and hand sanitiser in the last two weeks, supermarkets have brought in limits on sales of products.

Woolworths, Coles, and Aldi brought in a one packet per customer limit on some items such as toilet paper last week.

On Wednesday, Woolworths went one step further and issued a store-wide two limit rule on items unless otherwise stated.

‘There is now a per customer, per shop limit of two items from any single category on most packaged products across Woolworths Supermarkets and Metro stores and online.’ the supermarket said.

‘This means customers will only be able to buy two products from any single included category, regardless of the brand or variety. There are some exceptions where no limits remain, such as fruit and vegetables, fresh milk and baby food.’

No restrictions apply to items such as fresh fruit and vegetables, bakery, canned fish, meat, and milk.

Coles and Aldi are limiting purchases of certain items only – including rice, pasta, and paper towels. Woolworths, Coles and Aldi have brought in shopper restrictions on certain items