An American football fan experienced one of the longest 20 seconds of his life on Saturday after a bald eagle went rogue as he prepared to watch the Clemson Tigers take on Notre Dame in Arlington, Texas.

The Fighting Irish team supporter tried to put on a brave stance at the AT&T Stadium when the bird flew onto his shoulder and perched there for almost 20 seconds and flew over to another fan afterward.

Later admitting he was ‘scared c***less’, the crowd could be heard roaring as they noticed the creature take grip of Albert Armas, 42, at the Cotton Bowl Classic. 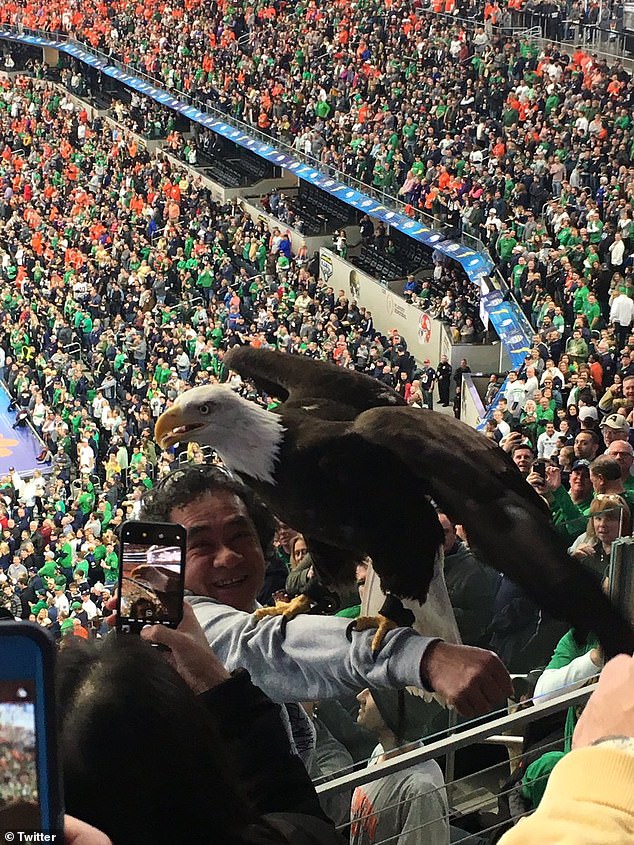 He maintained his crouched over stance as the eagle did its thing; flapping its huge black wings while some of the 90,000 spectators snapped pictured on their phones and cheered the man on.

Meanwhile his 13-year-old son – who received tickets to the game for Christmas – laughed next to the Los Angeles man.

In the clip filmed from a box high above the action, a woman can be heard exclaiming ‘Oh my god!’ repeatedly until the bird flies off and soars over filed of the college football playoff semi-final.

But the man in the green T-shirt wasn’t the only one who experienced the creature’s hefty weight on his body.

Another man in the stands looked thrilled to provide a temporary perch for the white-headed eagle named Clark while his wife missed the action during her trip to the bathroom.

The man wearing a gray Notre Dame hoodie cheered with pride as it stopped on his extended arm and all eyes were on him during the unplanned moment. 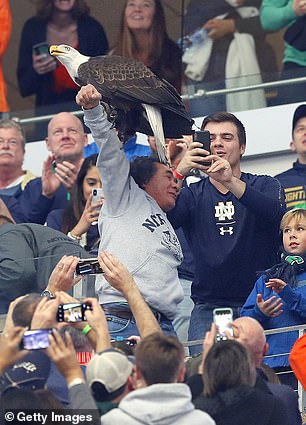 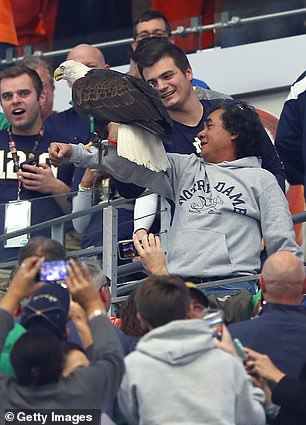 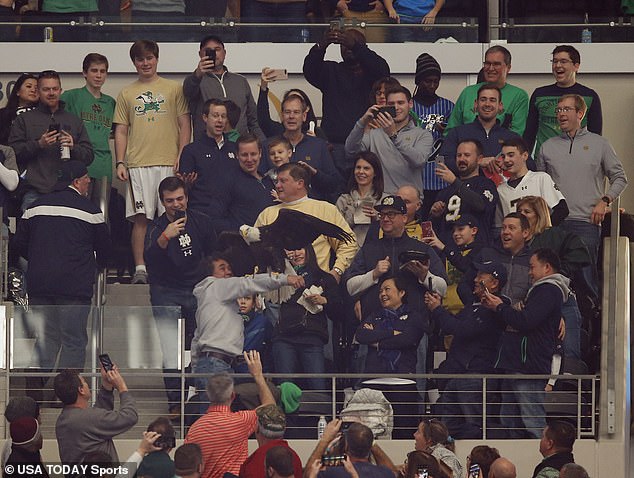 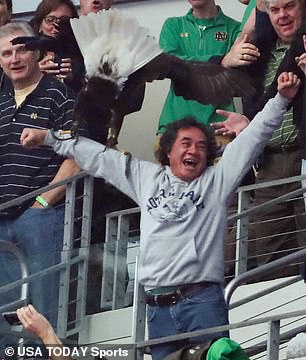 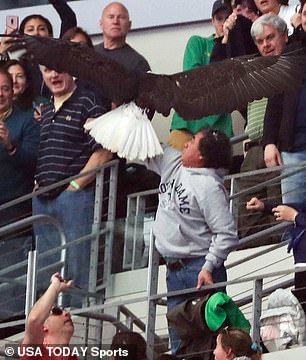 Tuyen Nguyen knew exactly what he was doing though when he coerced the bird to fly over to him.

Originally from Vietnam and aptly a Philadelphia Eagles fan, he told Sports Illustrated: ‘When I saw the bird land [on Armas], I thought, the bird had to be very tired. So I put my hand out to see what happens. And it landed on me. It was very interesting. I was very excited. It was amazing. I couldn’t even believe it.’

It was part of a National Anthem flyover before the Goodyear-sponsored game. However, instead of returning to its handler, Clark – who was born in 2003 at the World Bird Sanctuary in St. Louis – took a tour of the crowd instead.

It’s believed he was initially returning to the spot he took off from despite being trained to finish in the Notre Dame end zone. 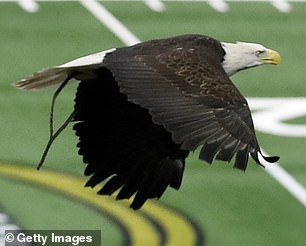 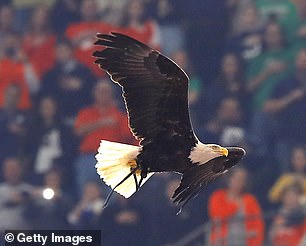 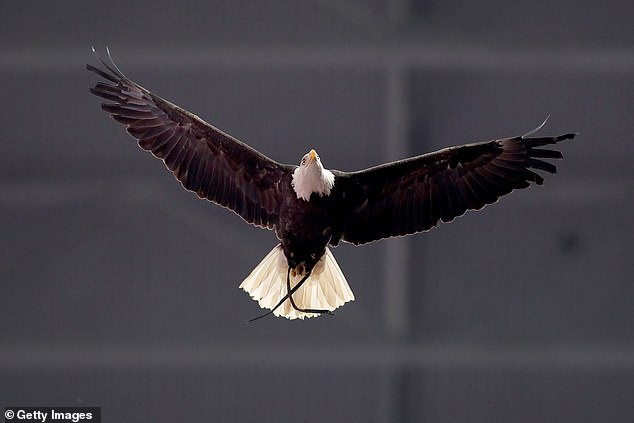 Hatched as part of a program to reintroduce the endangered species, Clark certainly shone the spotlight on North American bald eagles at the 83rd annual even for the championship title.

A professional eventually came to claim the eagle from the third level of the stands in the corner of the stadium.

As the bird became a trending topic on Twitter, he had his own unofficial page on the microblogging website by the first quarter. 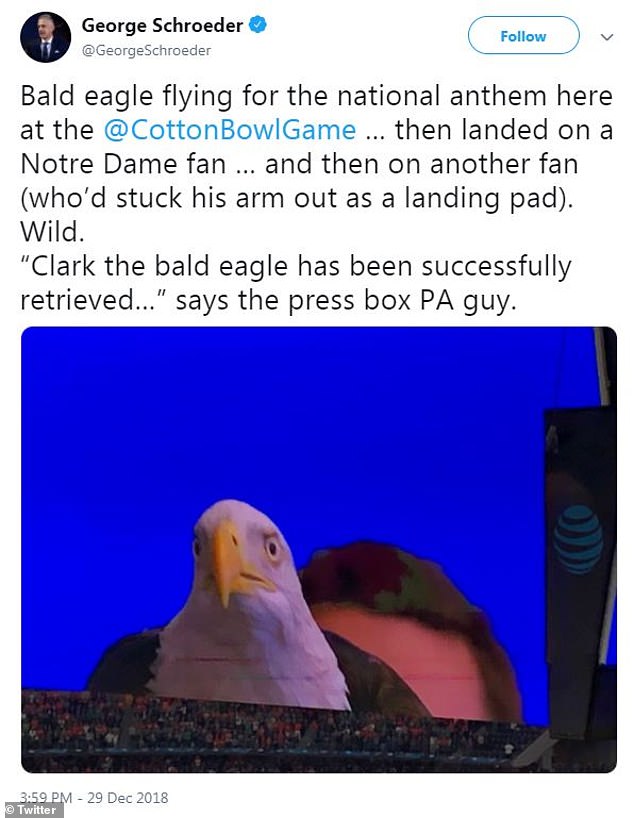 Clark, hatched in 2003, was safely returned to his handle and nobody was harmed 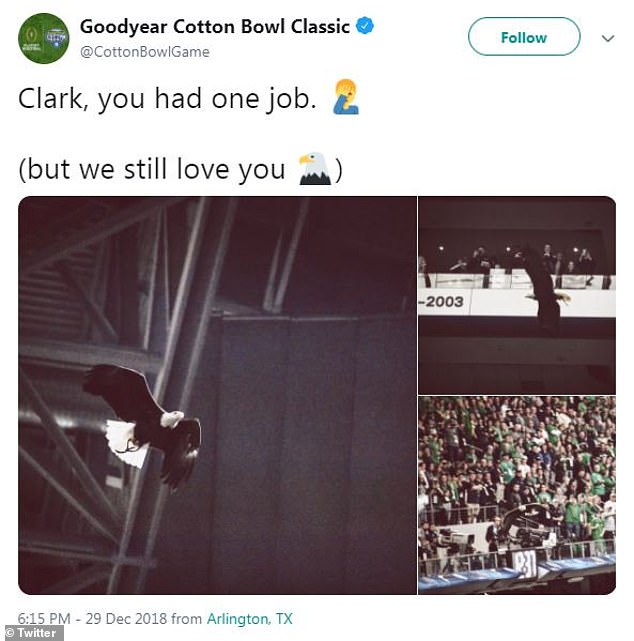 The Goodyear Cotton Bowl Classic tweeted: ‘Clark, you had one job. (but we still love you’