By Tom Sanderson For Mailonline

Colombia international William Tesillo has confirmed that he has been the recipient of death threats for his role in the South American country’s Copa America exit.

At the Arena Corinthians in Sao Paulo on Friday, unique rules meant that a 0-0 draw between the form team of the competition Colombia – who won all three of their group games without conceding a goal – and holders Chile went straight to penalties after 90 minutes.

Booed throughout by the crowd given his former ties to Corinthians’ arch rivals Palmeiras, Everton centre back Yerry Mina handled the abuse cooly and even threw in a little dance that saw him kiss his shindpads after converting his side’s fourth attempt.

Now the only player to score every one of his tries in Chile’s last five shootouts, Charles Aranguiz made no mistake in making it 4-4, which then put the pressure on Tesillo to deliver.

Hitting wide with a meek side-footed scuff however, Tesillo paved the way for a revitalised Alexis Sanchez to claim the spoils with a low shot into the bottom right corner that sent travelling Chileans into raptures and their country to the semi-finals against Peru.

Ever since the costly miss, things have apparently gone from bad to worse for Tesillo. After his wife Daniela Mejia took to her Instagram account to detail the threats received, the Club Leon star confirmed them to both Colombian radio and newspapers.

‘Yes, yes. It’s correct’ Tesillo insisted to El Pais de Cali. ‘They wrote to my wife and she published [them]. They wrote to me too, but I didn’t publish anything.’

‘In the face of the threats that are being imposed on us, we only pray. You have to think that this is just football and that you can lose or win,’ lamented Tesillo, in an interview for Radio Caracol. 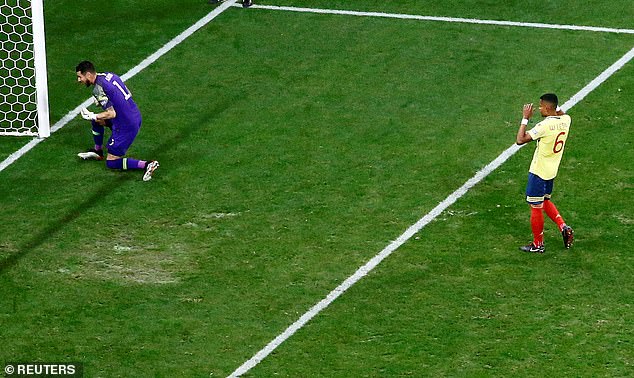 Yet this will do little to calm those behind the intimidations, one of which callously alluded to an infamous 1994 murder and read: ‘I hope that what happens to him is the same [that happened] with Andres Escobar’.

Scorer of an own goal in a 2-1 loss against the US hosts, the defender was slain in Medellin five days after Colombia’s elimination from the competition, despite being a hero for hometown club Atletico Nacional.

There is also more recent history too. Sent off three minutes into Colombia’s campaign at Russia 2018, threats were also made against Carlos Sanchez’s life then later Mateus Uribe and Carlos Bacca for fluffing their spot kicks against England in the second round.