A community in north London has launched an innovative campaign to block plans for a multi-million pound apartment block marketed at foreign investors.

They say that the development would block precious light to a children’s school, a park and to hundreds of nearby residents’ homes.

In this latest battle of community versus capital, residents of Golden Lanes estate have turned their apartment block into an artist’s canvas draped with bright banners that shout eloquent opposition to the redevelopment of Bernard Morgan House on Golden Lane.

People power: A community have launched an innovative campaign to oppose a development on Golden Lane in north London which they said threatens their community

Leading artists and writers, including Turner Prize winners and a Booker Prize nominated author composed many of the slogans in support of local residents’ rights to light and to happy, healthy homes.

‘Children need sunlight to grow,’ and ‘Zombie Investors Take Stock’, are some of the words that spell out dissent to the development on the building across the road from the site.

And this is not the only example of new forms of protest that London’s citizens are adopting in a bid to protect their communities from the hungry advance of developers.

UN investigators are currently examining whether gentrification is breaching human rights in London after a Latino market in Seven Sisters contested plans to bulldoze and redevelop the site which locals say is a vital community asset.

Pueblito Paisa’s fight against developers could have major implications for planning law and local campaigners against the Golden Lane redevelopment hope it could help their case.

The proposed new development for the site, which is called The Denizen, would stretch to 10 storeys and include no affordable housing.

‘We have built a strong community here and we love this estate, now it is being threatened by Tailor Wimpy who want to provide ‘safes in the sky’ for investors in Hong Kong to buy apartments that are often left empty.’

‘The Denizen development will steal precious light from our only green space in the area, Fortune Street Park, which is used to capacity year round by local residents and workers,’ Ms Philips said.

Three schools – a primary, secondary and nursery – are situated by the park which provides a vital resource to children, she said.

She said the Taylor Wimpey development is grossly out of proportion and looms over the park, blocking much-needed light.

It will also block up to 70% of light in apartments in Golden Lanes estate, a Grade II listed structure with a thriving local community, she said.

‘Some residents have lived here since 1957. It’s the kind of place you don’t ever want to move from,’ Ms Philips said. 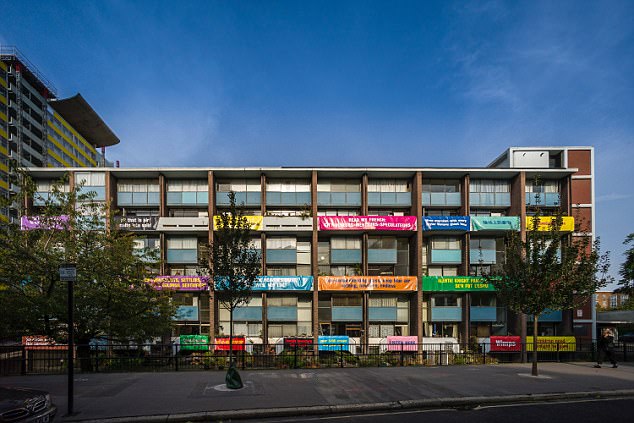 In this latest battle of community versus capital, residents of Golden Lanes estate have turned their apartment block into an artist’s canvas draped with bright banners that shout eloquent opposition to the re-development of Bernard Morgan House in Golden Lane

And the new development would provide no benefit – except to wealthy investors, she said.

London has already experienced the phenomenon of ‘ghost homes’ or properties bought for investment purposes only to be left empty, and residents fear this will happen at Golden Lane too.

‘There is a desperate need for social and key worker housing in the City of London.

‘Instead of providing for people and families in need of a home which they can afford, The Denizen is aimed at the wealthy investment buyer.

‘What is happening here is typical of what happens all over London in terms of property speculation and over-development.’

She said that the community have applied to the High Court for a Judicial Review but the legal process will take several months.

They have established a crowd justice page  to help them meet the legal costs.

Taylor Wimpey plans to build 99 apartments with a communal lounge, a games room, and cinema room for residents with prices starting from £790,000 on the site.

It has agreed to pay £4.5 million to the local authority in lieu of providing affordable housing there. 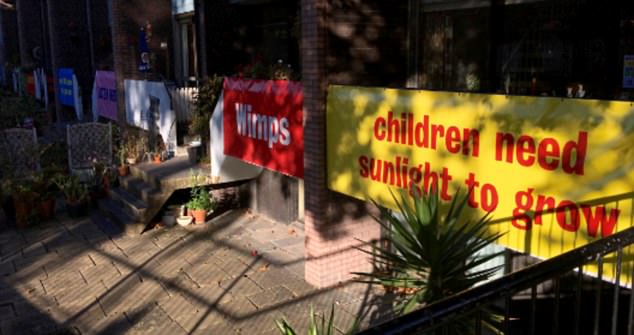 Local residents, writers and artists designed colourful banners to shout opposition to the proposed re-development of Bernard Morgan House which stands opposite their homes

A spokesperson for Tailor Wimpey told MailOnline that it has worked with the City of London to design a development that fulfils the potential of the block.

The spokesperson said that the company’s planning application was reviewed and consented by the City of London, and concerns were considered as part of this process.

But Ms Philips said that it breaks many guidelines in The City of London’s Local Plan and The Golden Lane Estate Listed Guidelines.

Residents have also questioned whether planning committee members, including chairman Christopher Hayward, should have declared commercial interests that connect them with the developer.

Ms Philips said that the when the building provided affordable accommodation to police workers it had a positive influence on the community but now the area has seen a surge in drug use.

She said the community deserves to have its voice heard on how the planned development of the old police section house will now impact their lives.

She said that protecting and supporting communities is vital if we are to build a strong, safe and prosperous city.

‘People feeling part of a community is important to their physical and mental well-being.

‘People who feel safe in their community mix more readily with each other and form vital connections which create this sense of community and support.

‘Healthier and happier people are more productive, so the gains are positive for the economy.

‘Vulnerable people in London can go under the radar, elderly people can stay in their homes isolated and unnoticed, those with mental health issues can blend into the crowds, and parents can struggle.

‘Having a strong community can help and protect vulnerable members of our community and society,’ Ms Philips said.