Conjure up a magic mortgage by 2% or less

Two per cent. That is the magic number all mortgage borrowers are urged to beat this autumn after Bank of England Governor Mark Carney said a series of ‘gradual’ interest rate rises could begin in the coming months.

After Carney’s comments, financial experts said the smart money is now on the first rise coming as soon as November. So borrowers on variable rate deals who do not act now could see their repayments rise just before Christmas.

David Hollingworth, of broker London & Country Mortgages, says: ‘This will be the first interest rate rise in ten years, and the first many younger borrowers have ever faced. But the good news is that you can act now to protect yourself from it.’

Follow our advice and you should still have time to sign up to a historically low mortgage rate – set at a rock bottom 2 per cent or less – for anything between two and five years.

Here are the FIVE key steps to take before the Bank of England rate- setting meeting in November.

Check when your existing deal expires

You can sign up for a new deal and secure the offered rate up to six months before moving your loan to it. So even if your current deal runs until next April you can choose a low rate now and arrange to transfer your mortgage to it without any early redemption penalties.

If you wait until spring before picking a deal, many rates are likely to be priced at above today’s 2 per cent target.

Work out your loan-to-value figure

The lowest priced mortgages go to borrowers with the most equity in their homes. Key is calculating your loan to value. This is done by dividing your outstanding mortgage by the value of your home and multiplying the result by 100.

Use this ratio when seeking a new deal as there is no point in applying for a loan with a loan to value of less than 60 per cent when it is higher. Do it and you can lose non-refundable application fees if you reject the lender’s alternative rate.

Signing up for a mortgage set below the 2 per cent benchmark will not just cut your monthly repayments.

If you use the savings wisely it can help clear the loan years ahead of schedule as well. 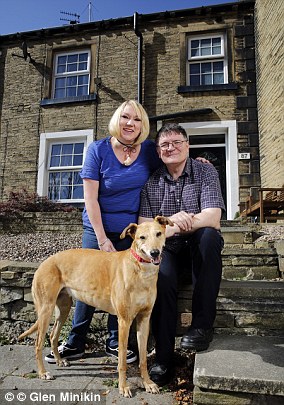 This is exactly what bus driver George Neill, 57, and voluntary worker wife Janet, 47, discovered when they remortgaged this summer.

The couple last remortgaged ten years ago, just before the financial crisis. They picked a ten-year fix at what was then a best-buy rate of 5.99 per cent.

Janet says: ‘When this ended the rates we could switch to were so much lower.’

After shopping around online they found a two- year fix set at just 1.82 per cent from Yorkshire Building Society – and for a while they thought it might be too good to be true.

They were wrong. Janet says: ‘In the end the application was incredibly easy and we were approved almost straight away.’

The monthly repayments on the couple’s three-bedroom terraced house in Brighouse, West Yorkshire, have now fallen by £300 a month – nearly £4,000 a year.

As well as buying a few luxuries, the couple plan to use the flexible features of their loan deal to repay occasional lump sums to help clear their mortgage early.

Janet adds: ‘Having found such a low rate, we do not want to waste any of the monthly savings we have made.’

Decide how long to fix

The lowest fixed rates apply for the shortest periods, normally two years. But most lenders also offer three and five-year fixes – these longer ones are likely to carry borrowers through any upheavals caused by Brexit.

If you are choosing a longer term deal check the loan is portable, so you can take it with you if you decide to move home during the term.

Also check you can make overpayments. This facility is a useful way to cut mortgage bills even more if you come into a windfall or work bonus.

Calculate if a high loan fee is worth paying

Often the lowest rate deals carry the highest set-up and application fees. These fees can be worth paying if you have a big mortgage and will save enough each month to make back the initial outlay quite quickly.

Add the total set-up costs to all the monthly bills for the mortgage term to compare deals. The True Cost mortgage calculator at our sister website This Is Money can help.

Cast your net widely when you look for a new deal

Find out what your current lender offers first. If your mortgage is small and you can move fee-free on to a new deal this can be a good option even if the rate is not the best around.

Look at building societies as well as banks. Yorkshire Building Society currently offers some of the lowest rates through brokers while Nationwide offers cashback as well as fee-free terms on many deals.

Lenders that come in well below the 2 per cent mark for two-year fixes include the Post Office, Co-operative Bank, the AA, Sainsbury’s, HSBC and Bank of Ireland as well as building societies Yorkshire, Leeds, Nationwide and Chelsea.