The contents of a Tudor mansion which has links to some of England’s most famous actors and authors are set to bring in over £1million at auction.

Treasures inside Athelhampton House in Dorset will go under the hammer next month and the sale of the items has been hailed as one of the best country house sales for a generation.

Items include pieces of fine art, furniture, sculptures, paintings and rugs which have been amassed by three generations of the Cooke family.

Outgoing owners Patrick and Andrea Cook have just sold the £7million Tudor mansion and are unable to take the hundreds of heirlooms with them to their new property.

At present all of the 500 lots remain in situ at Grade I listed Athelhampton that once inspired author Thomas Hardy and was visited by an array of film stars including Noel Coward.

The property was originally purchased by Robert Victor Cookie in the 1950s in order to house his collection of English furniture.

Athelhampton House (pictured above) dates back to the 15th century and is nested in the Dorset countryside. Items inside the house are set to be auctioned next month 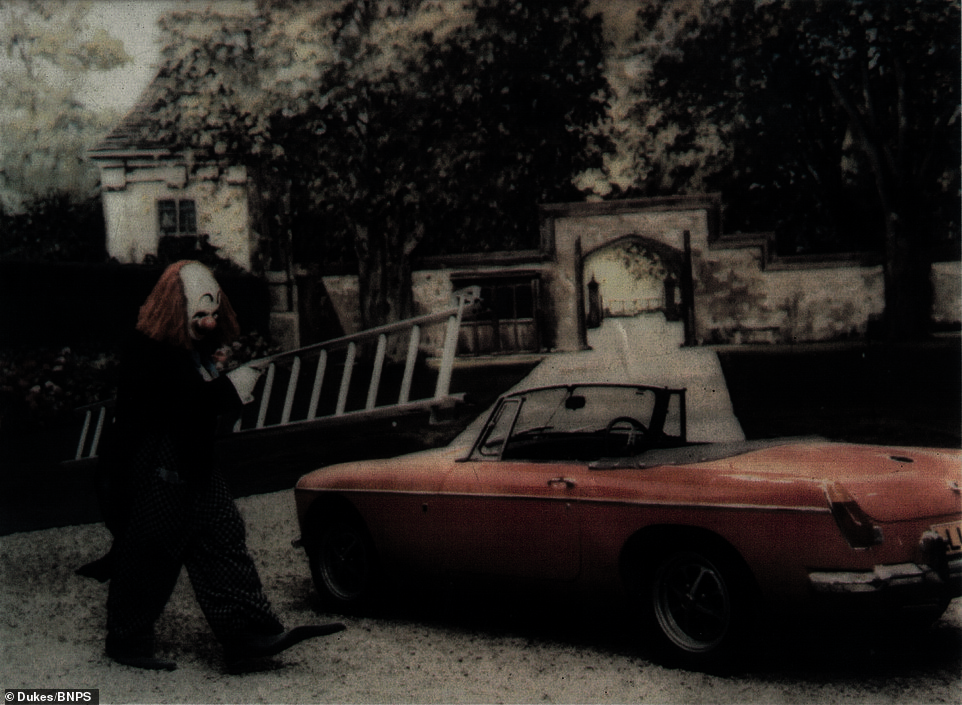 MG B Roadster pictured in stills from the film, Sleuth which starred starring Laurence Olivier and Michael Caine (pictured as a clown) 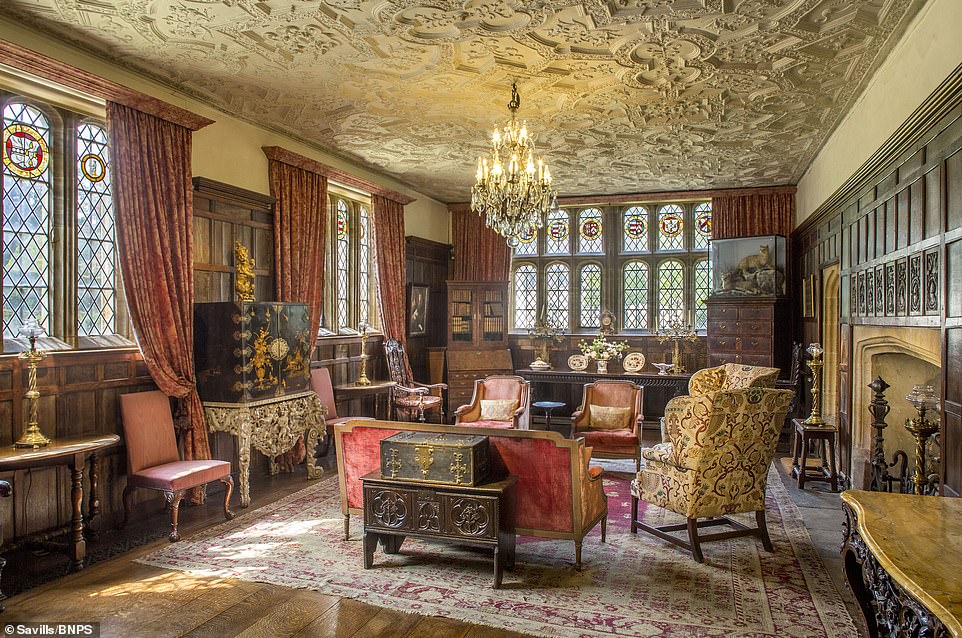 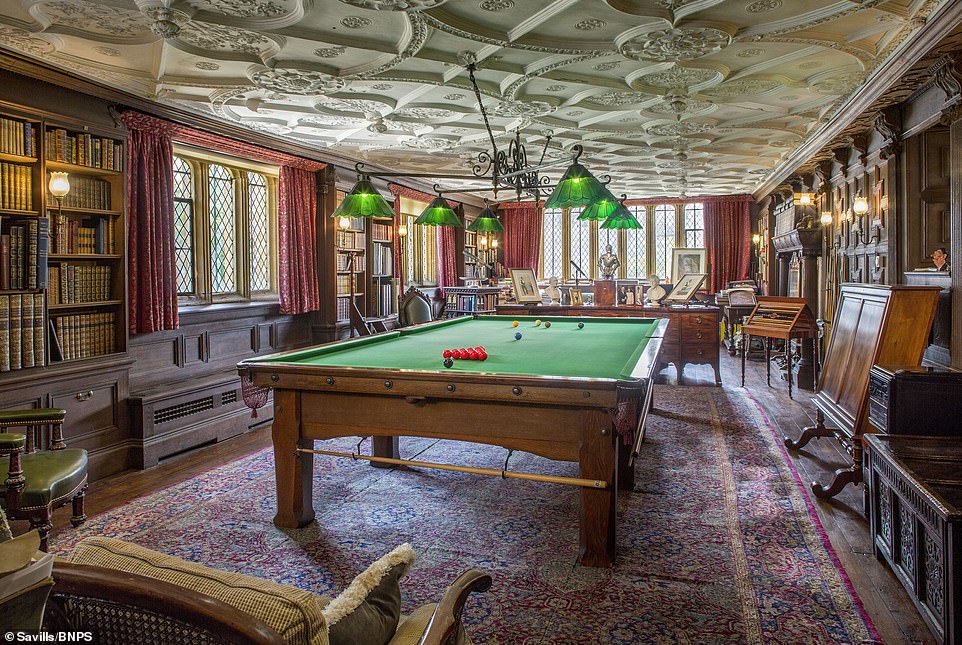 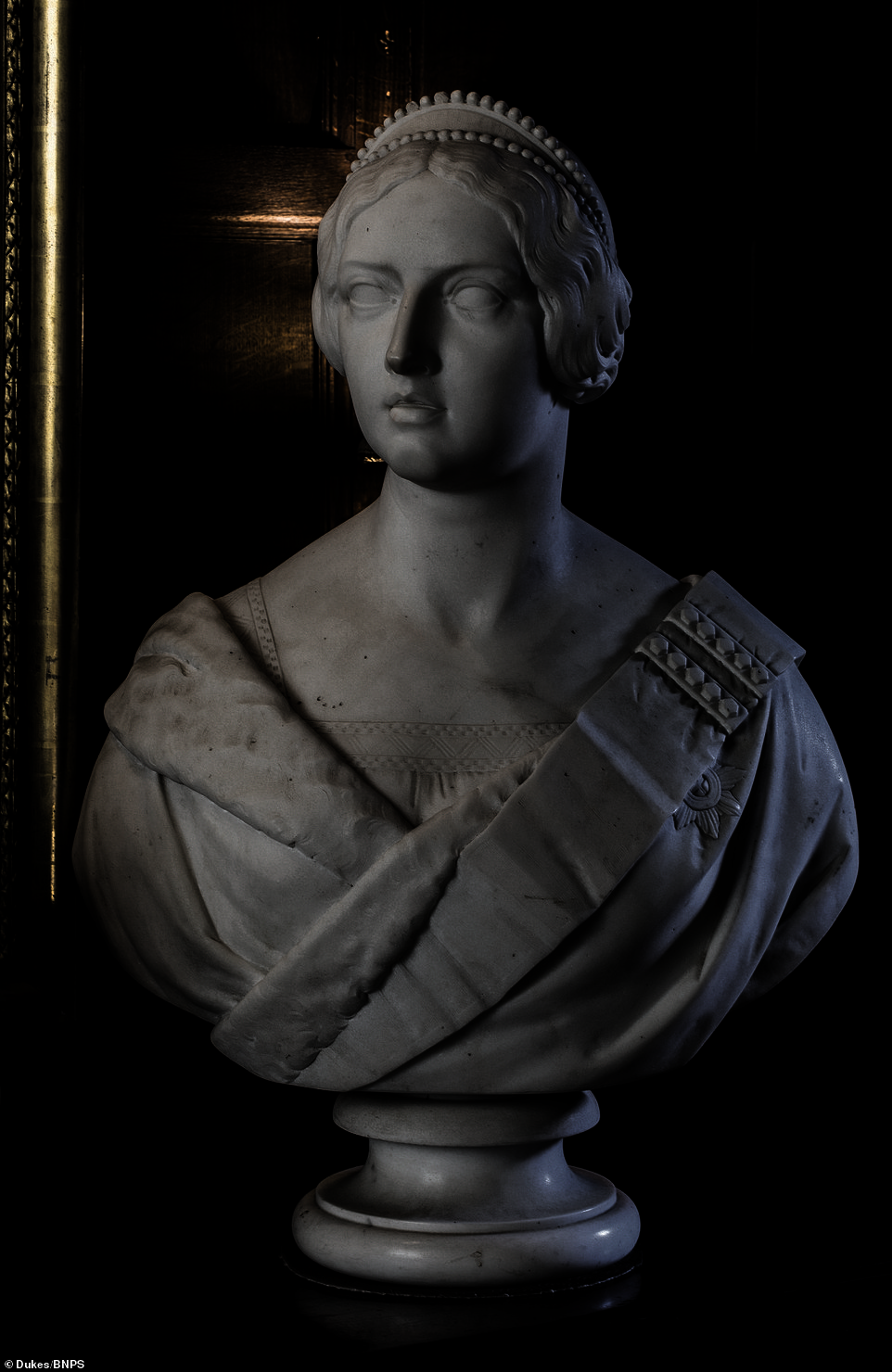 Pair of White Marble busts of Prince Albert and Queen Victoria with a guide price of £10,000 (one of the busts, pictured above)

But it was also used as a film set and in 1972 was home to Laurence Olivier’s movie ‘Sleuth’, with one of the items being sold at auction being the red MG Roadster driven by Michael Caine in the 1972 thriller.

Another leading lot is a George II mahogany side table made by celebrated cabinet maker Thomas Chippendale, which is worth £40,000.

This is while a set of George III mahogany chest of drawers also made by Chippendale is expected to sell for £40,000 and another George II item, a bookcase built in about 1735, is valued at £30,000.

Elsewhere in the house are a pair of matching marble busts of Queen Victoria and Prince Albert made by the English sculptor John Francis in 1853 and valued at £10,000.

Two oak four poster beds – one from the time of Henry VIII and one from Charles I – have a combined value of £30,000.

And a striking 17th century William and Mary Japanese-style cabinet is expected to go under the hammer for £25,000. 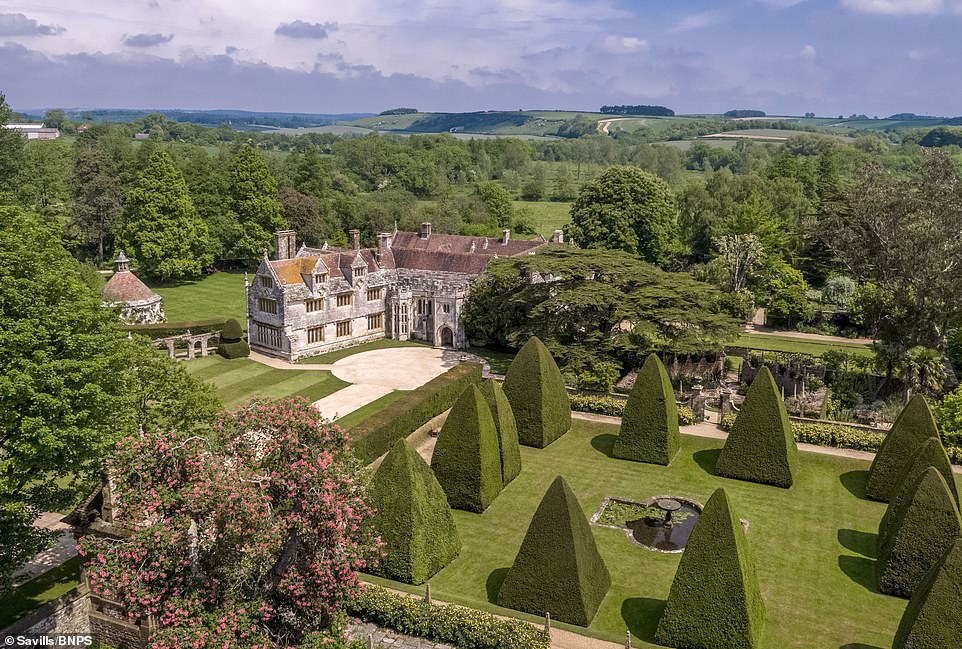 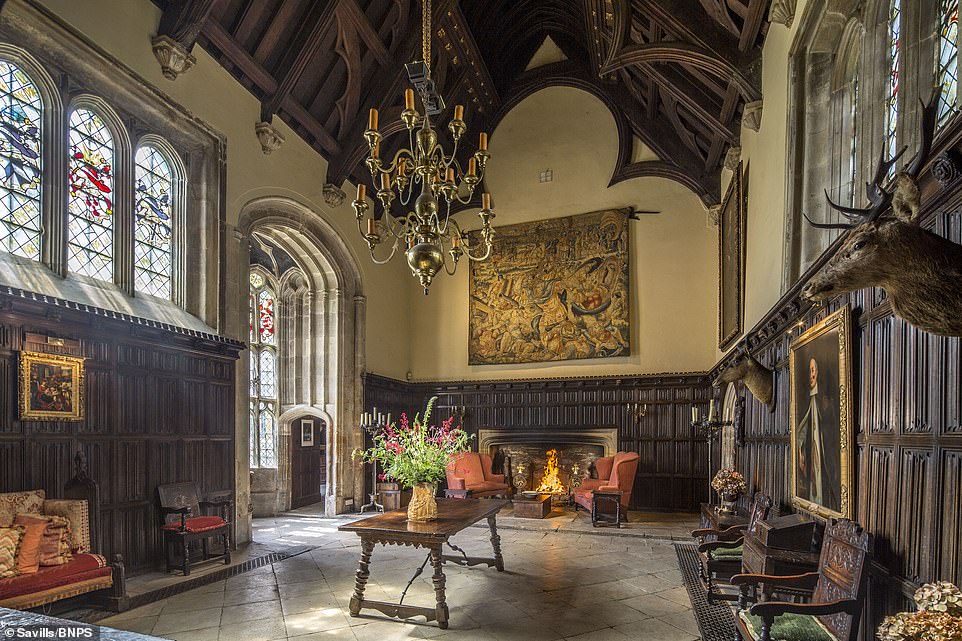 One of the entrance halls at the property (pictured above). This one shows a room with paintings and art work with a table with a potted plant sat on top of it

Numerous paintings that still adorn the oak-panelled walls of Athelhampton are also available.

One of these is an oil painting by the acclaimed English artist Robert Peake the Elder produced in the 16th century. It is of Catherine, the wife of a wealthy Somerset landowner.

According to experts the work is an ‘exceptional full-length portrait on a grand scale’ that is valued at £50,000.

The auction, that is expected to attract international interest, is being held next month at Athelhampton by Duke’s Auctioneers of Dorchester, Dorset.

There will be four viewing days ahead of the sale with all of the items on display in various parts of the grand house. 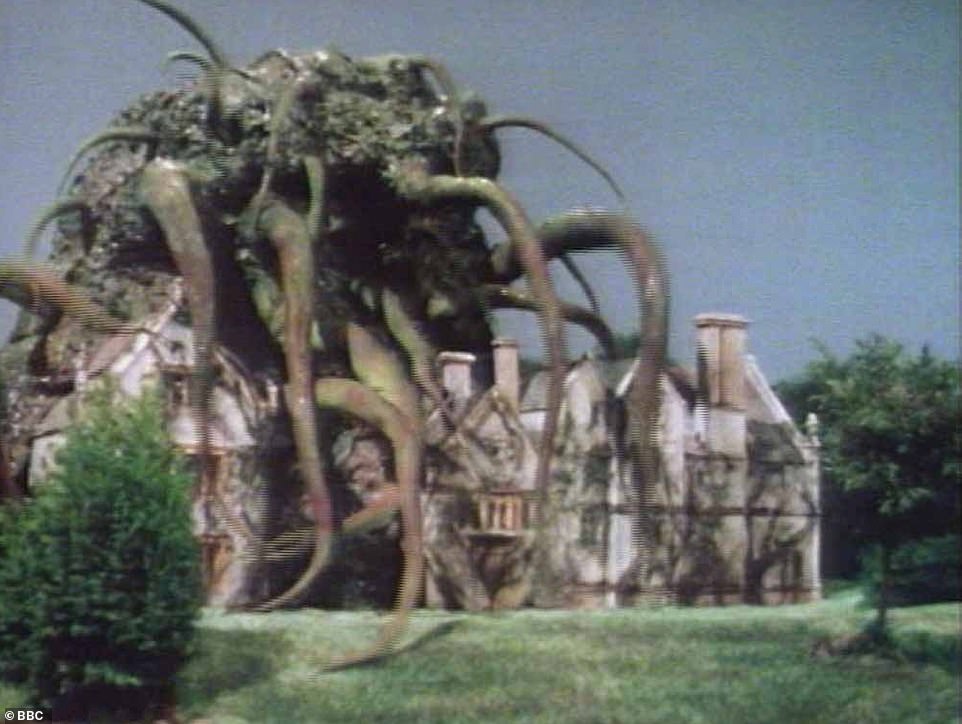 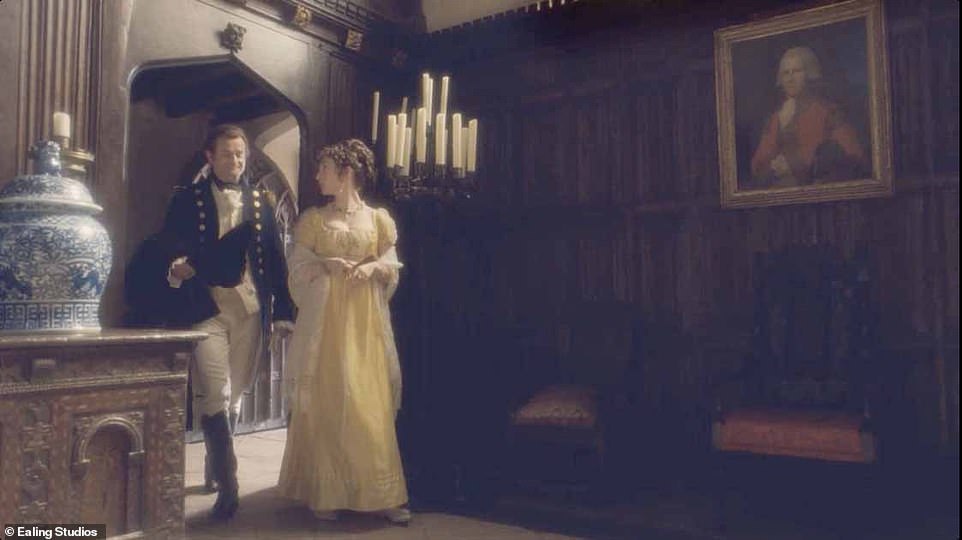 From Time to Time (pictured above) was also filmed at the property. The film is a haunting ghost story which spans two worlds 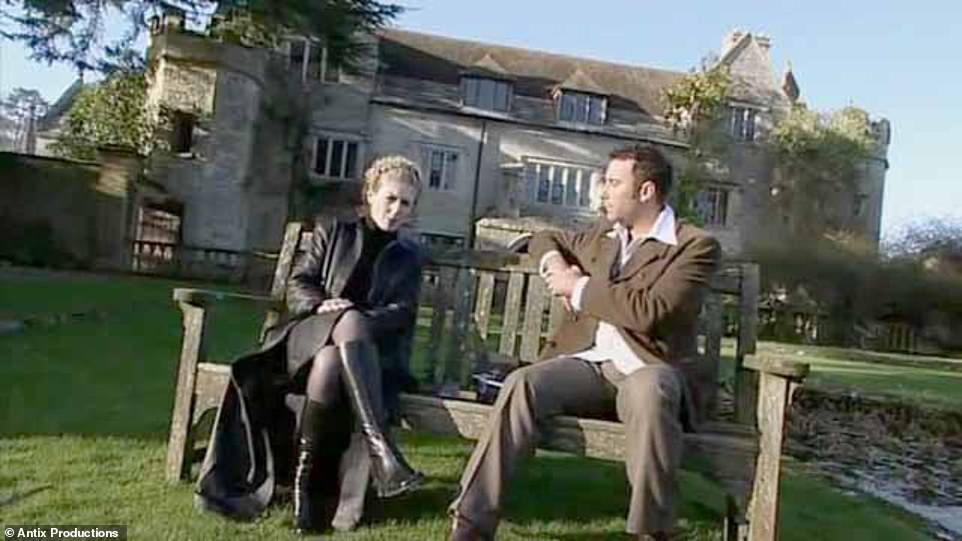 As well as being the perfect spot for a ghost story, the team at Most Haunted also filmed at the property in 2002 (pictured above)

Auctioneer Guy Schwinge said that the condition of the property is due to the ‘dedication’ of the Cooke family over three generations.

HE added: ‘It is little wonder that the author Simon Jenkins chose it for the front cover of his book England’s Thousand Best Houses.

‘The sale at Athelhampton promises to be a landmark event and one of the most exciting auctions for a number of years.

‘The house and gardens are the most magnificent backdrop and the collection, largely formed in the 1930s and 1940s include some quite exceptional pieces which are likely to attract attention from collectors around the world.

‘Good old-fashioned auctions on the premises are a rarity these days and it is a privilege to organise one against such a historic backdrop.’ 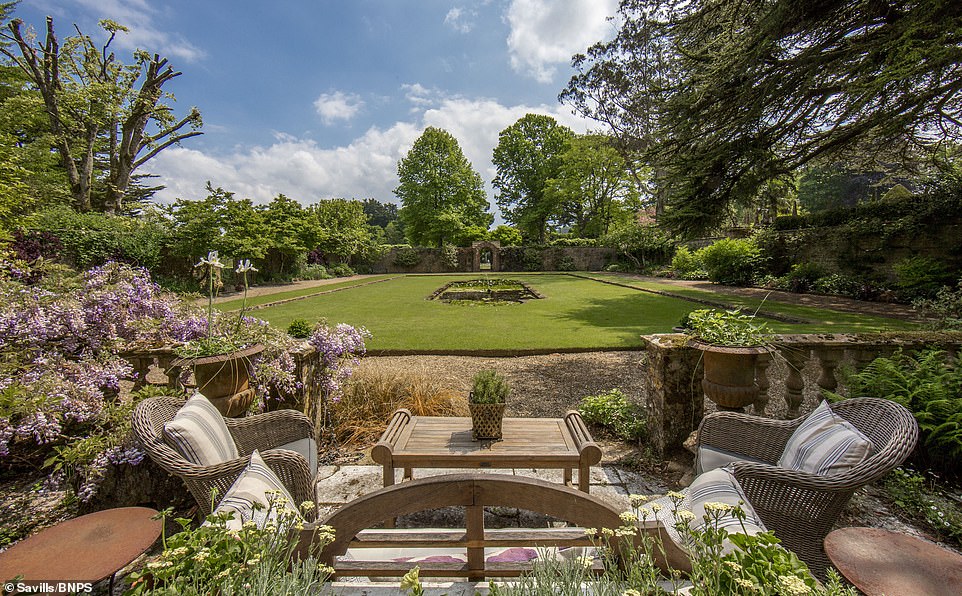 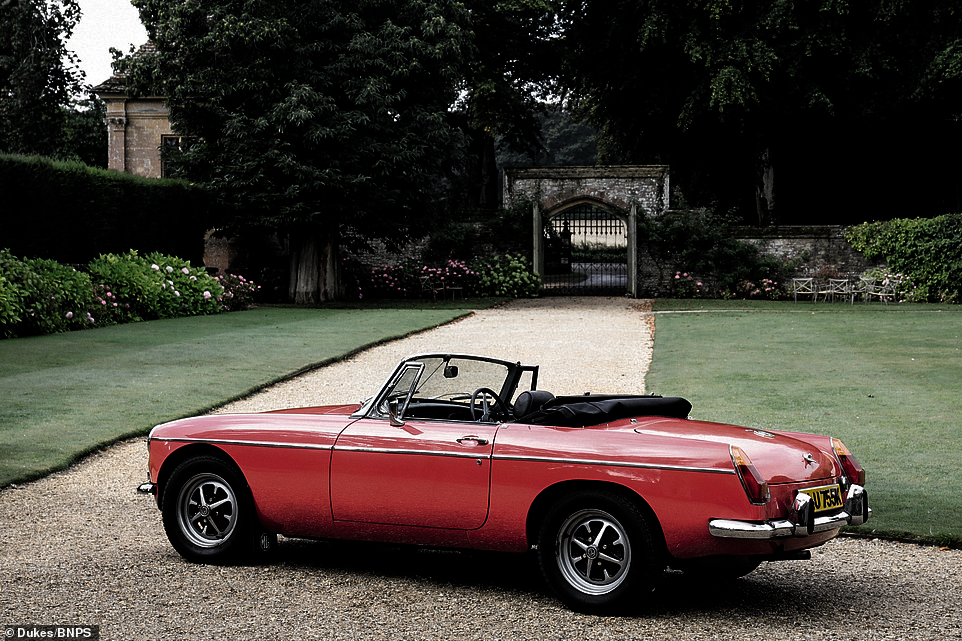 The MG B Roadster 1972 with appeard in the fil, ‘Sleuth’ in the 70’s (pictured above_ is one of the items which is up for auction 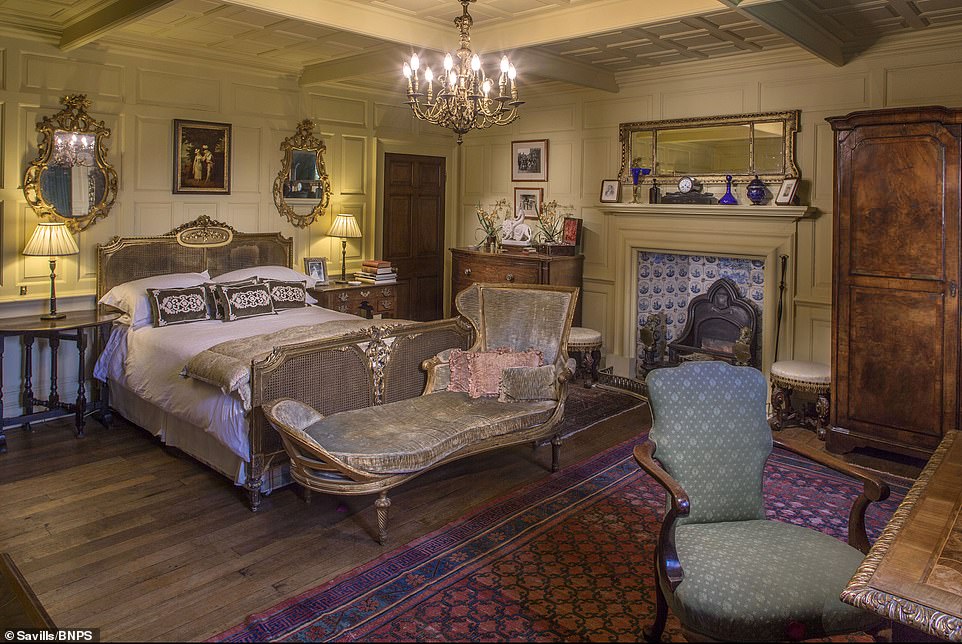 Fit for a Queen! This stunning bedroom is complete with lavish interiors and some cute trinkets which are seen on top of the fire place 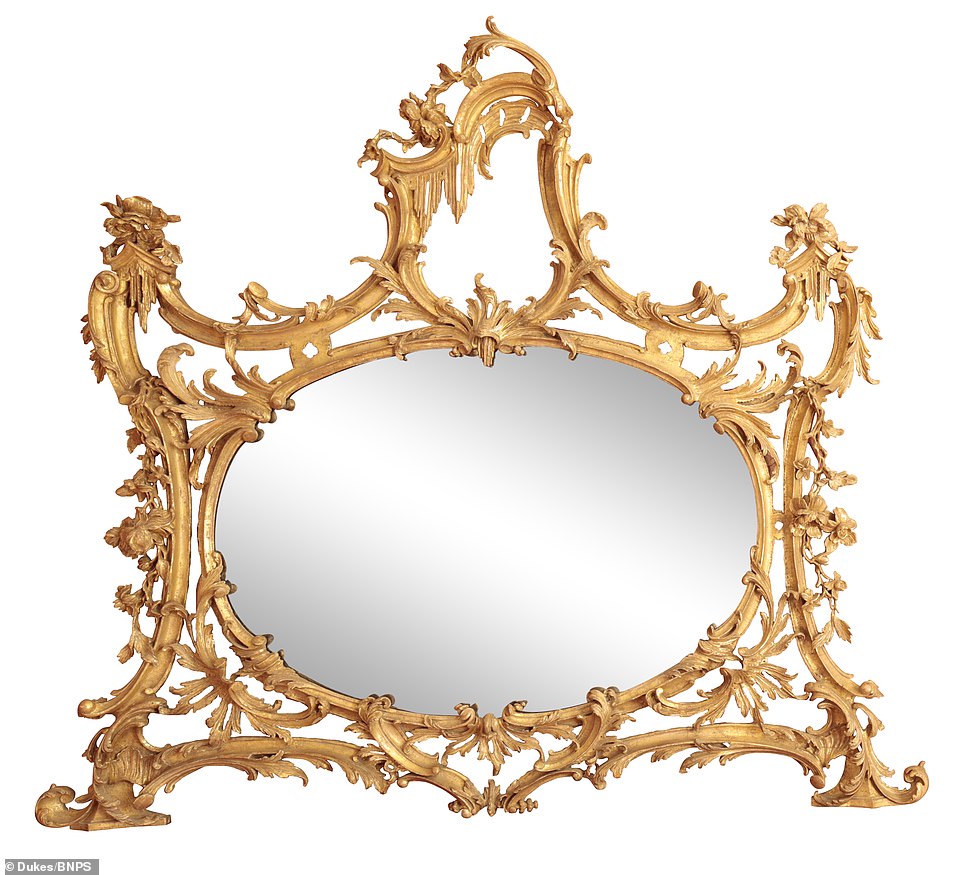 A George III mirror (pictured above) is valued at £15,000. The mirror has some intricate detail and is also included at the auction

Athelhampton House sits beside the River Piddle and was built in 1485 by Sir William Martyn, a successful merchant who was made Lord Mayor of London in 1492.

In the late 19th century Wessex author Thomas Hardy was a regular visitor to the house and he set his poem ‘The Dame of Athelhall’ there.

Hardy is also known to have painted a watercolour of the old gatehouse.

After being bought by Robert Cooke the house passed down to his son Sir Robert (Robin) Cooke, the MP for Bristol, and his wife Jenny. 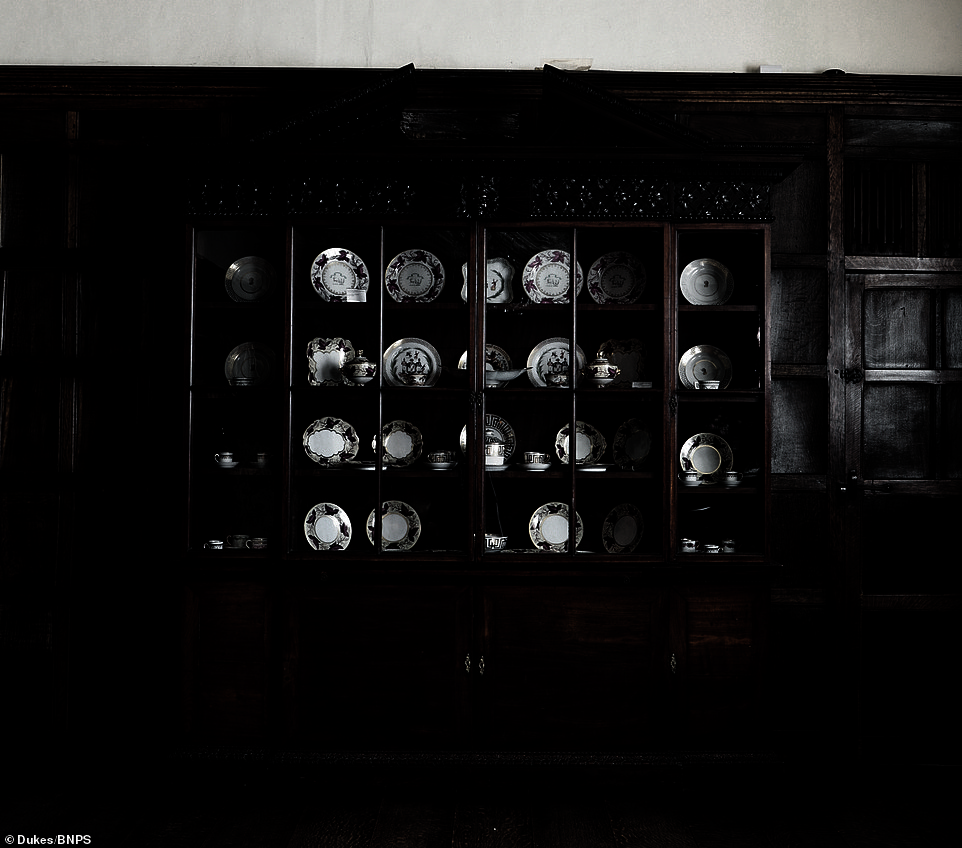 A George II Break-Front Library Bookcase (pictured above) is listed for £25,000. The cabinet is currently home to some decorative plates

After she died in 1995 the house was inherited by Patrick Cooke who took over the running of the house and stunning gardens.

With wife Andrea, he spent the last 30 years adding to the collection and restoring and managing the property, turning it into a successful tourist attraction and wedding and events venue. 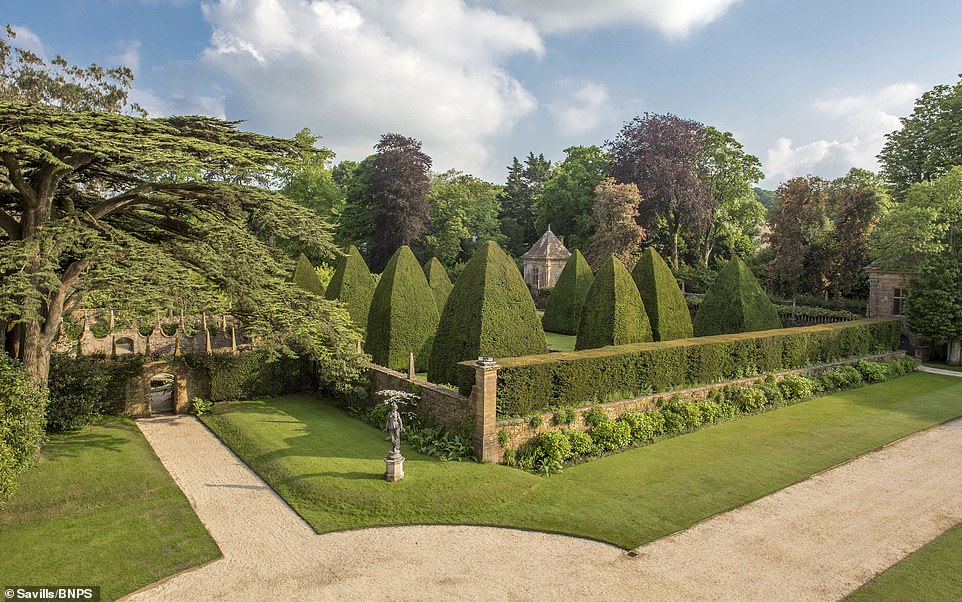 Majestic! People who purchase items will be able to imagine them having once sat on the grounds of the property (above)

The Cookes decided to sell up to pursue a new project.

Mr Cooke, now aged in his 50s, said: ‘I’m retiring from running Athelhampton after 30 years so we’re selling the house and a lot of the contents and moving on to another property, another restoration project.

‘I’m sure the sale will attract interest from all around the world.’

Athelhampton has recently been bought by the economist Giles Keating who will keep the stately home open to the public and carry on running it as a wedding venue. 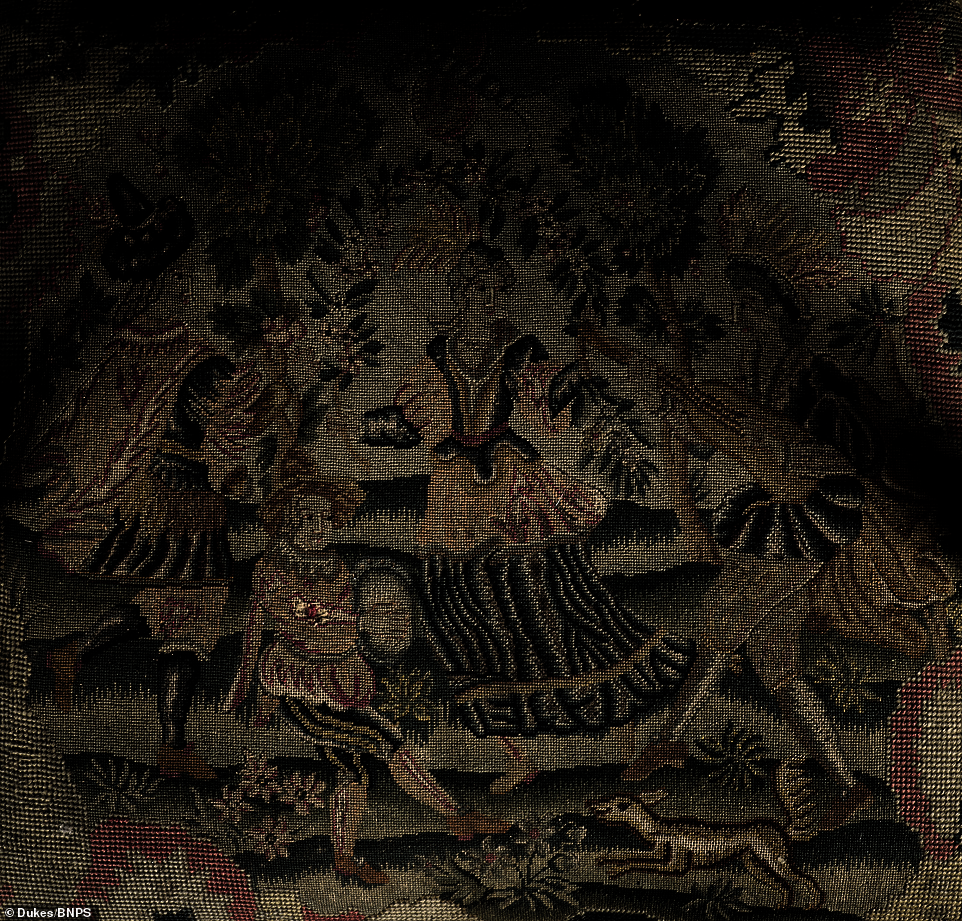 A set of Eight George III Dining chairs (pictured above) have a guide price of £25,000. The fabric of the chairs seems to be in great condition

Mr Keating said: ‘It is quite challenging to take responsibility for a house with the beauty and heritage of Athelhampton, but all the visitors I have spoken with feel it is a magical place and they are delighted that it is staying open.

‘As well as being a stately home open to the public, Athelhampton is regarded as one of the finest wedding venues in the country.’

Members of the public can attend the four viewing days between October 5-8 without an appointment but must buy a £25 catalogue.

The auction itself takes place on October 9 in the coach house on the grounds of Athelhampton.