Coronavirus Australia: Sydney nurse reveals what it is REALLY like inside Covid-19 ICU

A Sydney nurse has issued an impassioned plea calling on Australians to take Covid seriously as she reveals the terrifying impacts of the illness.

The young healthcare worker, Meg Johnson, took to Facebook to warn Sydneysiders to remain vigilant and abide by lockdown measures as the city grapples with a swelling outbreak of the highly-infectious Indian Delta variant.

The state recorded 77 new cases on Sunday – of which 33 were in the community while infectious – bringing the so-called Bondi cluster to 566 since June 16 when an infected airport driver first tested positive.

So far, there are 52 patients in hospital, including 15 in intensive care – including a teenager – and five on ventilators – with the city’s three-week lockdown likely to be extended as some residents continue to flout the rules.

Sydney nurse Meg Johnson has revealed the terrifying impacts patients with Covid suffer, including struggling to breathe then forgetting who they are from the lack of oxygen (pictured, a Covid patient in Melbourne)

Fed up with people not taking the threat seriously, Ms Johnson cautioned the health crisis was ‘no joke’ after witnessing patients inside the ICU ward die, or become so deprived of oxygen they do not know who they are.

‘After surviving the first wave last year – being separated from our friends and families – and wearing PPE (personal protective equipment) for up to 13 hours a day we’ve been asked to step up again … A lot of us turned up to work and our unit went back in to lockdown,’ she wrote on Facebook, News.com.au reports.

‘Every day I go in to work watching people struggle to breathe. Assisting in putting patients on life support and hoping they survive your shift. This is not a joke.

‘This is only the beginning for us.’

Ms Johnson said her colleagues do not only put themselves at risk of catching the virus, but also have to deal with patients becoming aggressive. 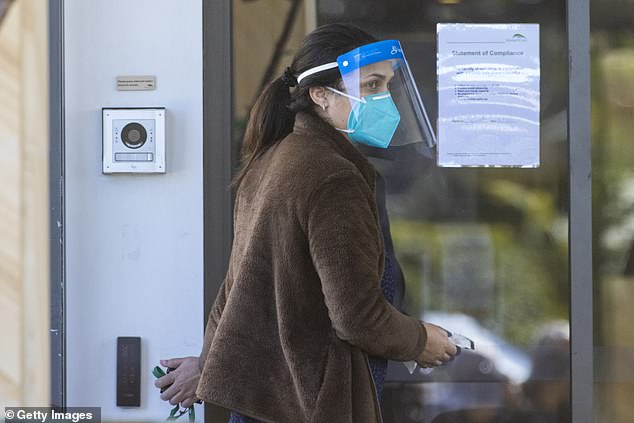 Nurse Meg Johnson has warned Sydneysiders to remain vigilant and abide by lockdown measures as the city grapples with a swelling outbreak of the highly-infectious Indian Delta variant (pictured, a healthcare worker in Sydney)

‘If you want to know how quickly and severely it can make you sick – within a 12 hour shift a patient can go from alert and laughing with you to being so severely hypoxic they can’t remember who or where they are,’ the post continued.

‘Sometimes even become violent. My colleagues and I are putting ourselves at risk taking care of these patients every day.’

She begged Australians to follow public health orders so the outbreak could be quashed as quick as possible.

‘If people don’t start doing the right thing by staying at home and being vaccinated it will only get worse,’ she said. 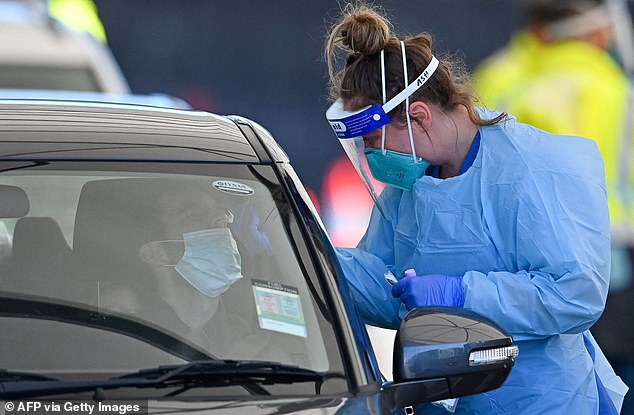 Ms Johnson said she and her colleagues have to face the risk of catching the illness and violent patients each they go to work. Pictured: Health workers conduct COVID-19 tests at the St. Vincents Hospital drive-through testing clinic at Bondi Beach

‘Come and take a walk in our shoes. It’s not something to joke about.’

Her words struck a nerve with other health care workers, with one recounting similar experiences.

‘I can relate. I don’t understand that some of our fellow citizens don’t want to follow the guidelines,’ they commented.

‘I’m on the frontline too. After expecting my patient to get discharged home in the morning and ending up in ICU in the afternoon. No medical history. I had to go to the staffroom and cry.

‘Thinking about these poor families that suffer. It can happen to all of us.

‘This wave is definitely different.’

The post was also  shared on Twitter where it quickly went viral, racking up more than 1200 shares.

Sunday’s 77 new infections marked the largest surge of daily cases in the state since the first outbreak in March 2020.

More than 50 of the cases were identified as close contacts of Covid-19 positive cases.

The state also tragically recorded its first Covid death on Sunday since the outbreak started last month, with a 90-year-old woman who was a close contact of a previous case dying hours after testing positive. 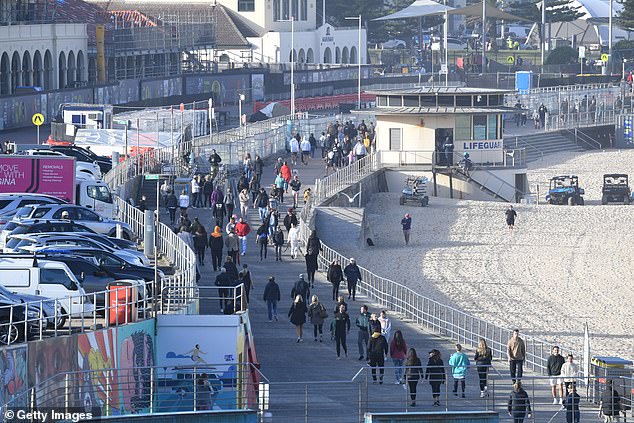 In NSW, there were more than 48,000 Covid-19 tests conducted within the last 24 hours, with police issuing 106 infringement notices for breaching the public health order.

Those fined included a group of 15 men caught playing cards at a house in Marrickville and ten people who attended an 18th birthday in Auburn.

NSW Premier Gladys Berejiklian reminded Sydneysiders to obey lockdown orders after they were tightened with residents ordered to wear face masks in apartment buildings and everyone outside of Sydney banned from coming in.

Announcing the latest Covid figures, Ms Berejiklian said on Sunday she expected the cases to soar past 100 on Monday.

She would not clarify if the lockdown would be extended and would wait to see how the Covid-19 outbreak developed before making any decision.