Coronavirus: Losing your sense of smell or taste IS a symptom

People should now self-isolate if they lose their sense of smell or taste because it is a definite symptom of coronavirus, the government announced today.

In the first change to the policy since the beginning of the outbreak, officials have added a third tell-tale sign to the NHS’s definition of COVID-19.

The chief medical officers of the UK say anosmia – the scientific name for the loss of the senses – is clearly linked to the virus and should be treated with the same amount of caution as a fever or a new cough, the only other two official symptoms.

Angered doctors welcomed the move but said it had ‘taken too long’, with the UK lagging behind other countries and the World Health Organization after nose and throat specialists first sounded the alarm about this in March.

One researcher who runs Imperial College London’s COVID Symptom Tracker app said up to 70,000 current coronavirus patients are roaming free or still working because the government is not warning people about minor symptoms.

Professor Tim Spector said his team have linked 14 symptoms to the virus but the NHS and Department of Health are only recognising three.

Ministers were last week warned that as many as one in four patients are unaware they have COVID-19 because they don’t get a cough or fever, but do suffer from anosmia or other less well known signs.

‘With a cough or fever, sensitivity was around 91 per cent,’ he said in a telephone briefing this morning. ‘By adding anosmia, in terms of case pick-up, we think that might go to 94 per cent.’

Professor Jonathan Van-Tam, deputy chief medical officer for England, said this morning that officials hoped adding anosmia to the list of official symptoms would help them to pick up two per cent more COVID-19 cases 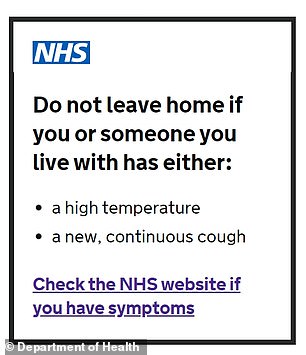 Until today, a fever or a new continuous cough had been the only officially recognised symptoms of the coronavirus. Now, anosmia – a lost or changed sense of smell or taste – will be added to the list

Professor Van-Tam added: ‘The reason for making the change now is that there has been a signal around the importance of anosmia as a symptom of COVID-19 for a while now.

‘It has been important to continue to look at that and be sure that we consider it and introduce it at the right time… this has been quite a difficult piece of science.’

ENT UK, which represents specialist ear, nose and throat doctors, last week accused government officials of ‘clinical negligence’ in taking so long to include anosmia on its official list of symptoms which require someone to self-isolate.

Professor Nirmal Kumar, the president of the association and a practising doctor in London, told MailOnline that anosmia was a worrying symptom because it didn’t stop people carrying on with their lives and spreading the virus.

WHAT SYMPTOMS IS THE GOVERNMENT MISSING?

Researchers at Imperial College London are running an app called COVID Symptom Tracker, which is being used regularly by more than a million people.

It works by people logging on every day to report, anonymously, how they are feeling and whether they have tested positive for coronavirus.

They have come up with a list of at least 14 symptoms which, if someone reports having them, increases their likelihood of testing positive for coronavirus.

This suggests they are symptoms of the disease.

The top three, in bold, are the only ones officially recognised by the NHS and government. If someone phoned 111 and described their illness but did not have one of those three, they would be told they do not need to self-isolate.

Fatigue, for example, would leave someone bed-ridden, while a cough might make someone think twice about going out in public, Professor Kumar said.

‘We’re relieved that this has finally been accepted but we alerted people about this eight weeks ago,’ he said.

‘Everyone else, including the World Health Organization, took it up urgently, but it has certainly taken too long here.

‘The prevalence is widespread. We used to see these patients occasionally but now we see them regularly.

‘If we had recognised this earlier we would have reduced the spread. The reproduction rate of the virus would have been lower.’

Professor Kumar added that research suggests around 20 per cent of young patients infected with the coronavirus may get anosmia as their only symptom.

Professor Tim Spector said that thousands of coronavirus patients are going under the government’s radar because its symptom definitions are too narrow.

He said on BBC Radio 4 today: ‘We list about 14 symptoms which we know are related to having a positive swab test, and these are not being picked up by the NHS.

‘At the moment, people are being told to go back to work if they’re a care worker, and they’ve got something like loss of smell or taste or severe muscle pains or fatigue – things that we know and we’ve shown are related to being swabbed positive.

‘This country is missing the ball in underestimated cases but also putting people at risk, and continuing the epidemic.’

He pointed the blame at Public Health England, which experts say was told weeks ago about other symptoms of the disease.

‘There’s no point telling people to be alert if they don’t know the symptoms,’ Professor Spector added. 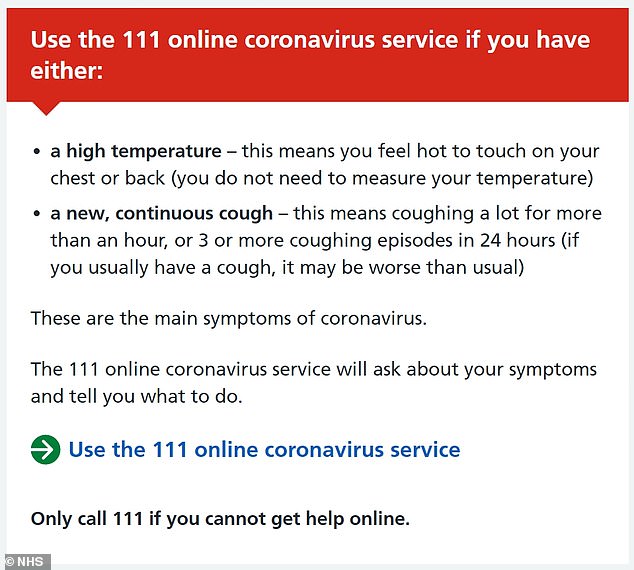 The government has come under fire for not listing a lost sense of smell and taste as a symptom of coronavirus sooner. Pictured, the NHS website as it still appears

‘At the moment they’re not really being offered tests, and they’re being told not to self isolate if they don’t have the fever and the cough and it’s probably around half of the people in the population who are in that situation.

‘We are probably missing at the moment between 50,000 and 70,000 people out there who are infected. We know that their swab tests will be positive.

‘Someone has got to urgently ask this question of why we’re the only country in this crisis that isn’t really widening our group of symptoms and get on with it and do something.’

It is not yet clear how many people who catch COVID-19 do lose their sense of smell,  and Professor Van-Tam said estimates range from the ‘teens’ to more than 50 per cent.

But data collected by Public Health England about the first few hundreds patients in the UK has convinced officials that there is a strong enough link connecting the two.

The deputy CMO said today: ‘We’re absolutely sure that other symptoms exist, including symptoms you wouldn’t usually associate with a respiratory virus, such as abdominal pain.

‘Some are so non-specific they would cause more confusion than clarity. Fatigue, for example, is a genuine symptom of COVID but any number of people suffer fatigue for a variety of reasons.’

Health Secretary Matt Hancock admitted he had lost his sense of smell when he fell ill with the virus, but that it had returned soon after he recovered.

NOSE AND THROAT DOCTORS SOUNDED THE ALARM IN MARCH

Specialist doctors called for the British Government to recognise anosmia – the loss or change of sense of smell and taste – as a symptom of COVID-19 two months ago.

On March 25 ENT UK said in a statement: ‘We believe this is related to COVID-19 infection.

‘At present, many affected patients do not have other symptoms, or only mild disease, and therefore do not meet the criteria for testing.

‘While loss of smell may be caused by other viruses, we think that it is reasonable to assume that COVID-19 is the cause until tests prove negative.

‘We therefore advise that patients follow current guidelines for self-isolating if they develop new onset anosmia. This will also apply to cohabiting friends or family.’

The government did not take up the call and did not add anosmia until the list today.

On May 13, last Wednesday, the same organisation said in a scathing press release: ‘We have been in regular contact with PHE regarding the utility of anosmia as a marker of infection.

‘However, anosmia is not yet included in the list of associated symptoms used by the NHS 111 service. Key workers, often dealing with vulnerable groups, are told they must still go to work as they do not meet the criteria for diagnosis.

‘At the time of writing, NHS 111 declares “it is unlikely you have COVID-19” unless you have a cough or fever; loss of sense of smell and taste, myalgia, fatigue and gastrointestinal upset are all disregarded.

‘In the face of the current evidence base, this now amounts to clinical negligence.’

ENT UK today welcomed the announcement but said ‘it has certainly taken too long’.

Professor Van-Tam said officials in the UK had not rushed to include the symptom because it was not certain in many cases that people were losing their sense of smell or taste directly because of the coronavirus.

Other viruses which affect the airways are known to have the same effect, including common colds and the flu.

Adding the symptom to the list too soon may have caused confusion or led people without the virus to believe that they had it, the deputy CMO added.

In most cases people’s senses do return to normal after their illness but it is possible that it can be permanent.

The UK’s four chief medical officers, led by Professor Chris Whitty, said in a statement today: ‘We have been closely monitoring the emerging data and evidence on COVID-19 and after thorough consideration, we are now confident enough to recommend this new measure.

‘The individual’s household should also self-isolate for 14 days as per the current guidelines and the individual should stay at home for seven days, or longer if they still have symptoms other than cough or loss of sense of smell or taste.’

Today’s step comes after government ministers were warned last week that the virus was going undetected in as many as a quarter or people who have it, because they had atypical symptoms.

NERVTAG, the New and Emerging Respiratory Virus Threats Advisory Group, warned officials last week that more people say they are losing smell or taste than have a cough and fever together.

They called for the public to be given a ‘wider perception’ of signs that could indicate COVID-19, the Sunday Telegraph reported.

Professor Peter Openshaw, an experimental medicine expert at Imperial College London, told the newspaper that as many as a quarter of patients could be missed.

He said: ‘In the self-reported symptoms, the loss of sense of smell comes out as a very, very frequent one.

‘But in terms of how often that would actually lead to a diagnosis of COVID, that’s not quite clear…

‘It is important people have a wider perception of how it may present.’

Scientists today welcomed the news that anosmia had been added to the list but echoed concerns that it had taken so long.

Professor Carl Philpott, a rhinology expert at the University of East Anglia, said: ‘The announcement that the CMOs have now recognised smell and taste disturbances is extremely welcome, albeit much later than other European counterparts and at least two weeks after the WHO added it to their list.

‘This will hopefully now be another measure by which the pandemic can be contained, especially as in some people it may be the only symptom or may precede other symptoms.

‘This is particularly pertinent in healthcare workers where reports of smell and taste disturbances have been commonplace, meaning the transfer of infection from colleagues to each other and to uninfected patients will have been happening unchecked.

‘There will also be a recognition that although many patients will recover these senses, the need for ongoing support will be faced by a minority in whom these sensory losses persist.’